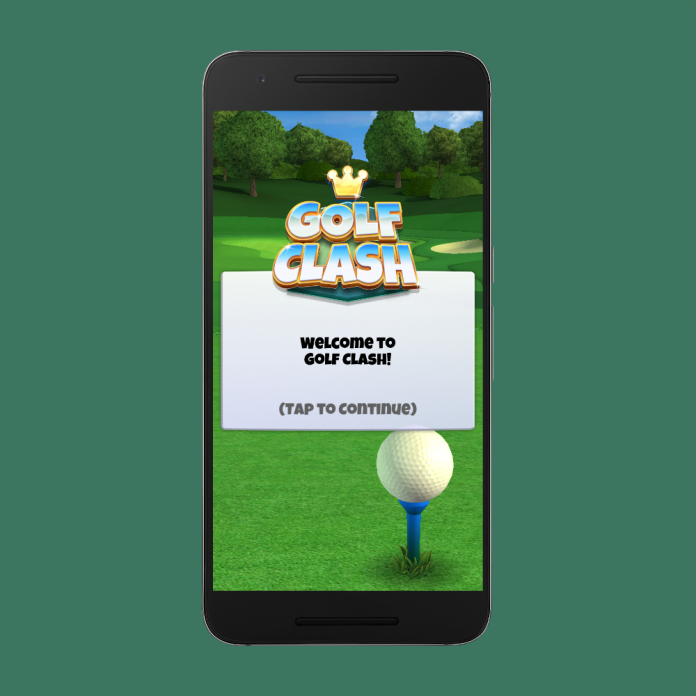 It’s been a long time since I’ve played a golf game. Remember the glorious days of Super Stickman Golf? Those were the days. Sometimes I think that golf and mobile are meant for each other because of the relaxed nature of the game. This makes it easy to create an intuitive but fun golf-related games. A brilliant example of this is Golf Clash, by Playdemic, which combines very easy to learn controls with well-thought gameplay centered around online matches.

When you start the game, it will ask you to link it to your Google Play Games account. Immediately after this, the game will throw you into a very short tutorial that will explain the two main gameplay mechanics.

First, you will determine how far you want the ball to go. Obviously, in the first shot, you would want it to go as far as possible, but in subsequent shots, a compromise has to be reached in order to propel the ball as close to the hole as possible.

Then, you will be able to shoot the ball by pressing the Take Shot button. The shot itself can be done by pulling the ball to a blue target that will appear on the bottom. The game does a good job in indicating where is the sweet spot, so you don’t have to do any guessing. After this, a target with a moving needle will appear, and your goal is to release the ball when the needle is in the center of the target.

This is easier said than done, as you might expect, so the game gives you different feedback based on your performance. If you land it perfectly, the ball will only be moved by the wind. If you do great, the ball will move slightly towards the direction your needle is pointing to. Do horribly wrong, though, and you’ll be stuck in the middle of the bushes or in a sand trap.

When you reach the final section and you have to putt the ball, the controls change slightly. You still need to pull the ball, but now you’ll have to align it to a cyan trail that appears on top of the grass. Then, you’ll need to align two arrows in order to get the perfect shot. You can see the Setup gallery to get what I’m saying.

After going through the tutorial, the game will throw you directly into a match. Do not be intimidated, though. Even though it looks like it searches for a player online, I’m pretty sure that the other player is a bot, since it does everything it can to avoid winning.

After getting through the tutorial, you’ll be greeted by a very crowded main screen. The most important element of this screen is the “Play Golf” button, which makes you choose between playing a match against an online player or against a friend. Since I don’t have friends, the online matches will have to do.

There are different tournaments you can choose from. All of them have an entry free that you have to pay in coins, which is one of the two in-game currencies (you already know the drill by know, so you can probably guess the other). In return, winning doubles the coins you disbursed for entry and will also increase your trophy count.

As with so many other games, trophy count is like your overall ranking, and winning matches will increase this rank and unlock new tournaments where stakes are higher. You can’t farm the beginner tournament forever since it can yield a maximum of 20 trophies.

Matches are straightforward: the one who gets the ball into the hole using the least amount of shots, wins. If both use the same number of shots, then you go to a tiebreaker, in which you have only one shot and whoever places the ball closest to the hole, wins.

After winning games, you will also receive chests that open after a certain time (such as the timed blocks in Pokémon Duel, for example). These will yield coins, gems, upgrade cards and other similar items.

Speaking of upgrade cards, if you know a bit about golf, you would know that they use different kinds of clubs based on the situation. This is also true for the game, and you can upgrade each kind of club by getting upgrade cards and paying some coins. This will improve the accuracy, power and in-game help that the club provides.

This will improve the accuracy, power and in-game help that the club provides. There are a lot of clubs that you unlock when unlocking the upper levels, adding a lot of replayability to the game.

Aside from clubs, you can also buy ball packs. These special balls (no double entendre, please) are much better than the regular ones you use since they have perks such as being less resistant to the wind, reaching farther distances, having more sidespin and such. These can be bought with gems only.

In case you haven’t guessed it until now, gems are the second in-game currency. You can use them to buy new clubs, balls, and chests. You can also use them to open chests received through online matches without waiting for the timer. In case you are low on coins, you can also exchange gems for coins and continue your ass-kicking in online matches. Prices for these gems range from $0.98 for 80 to a whopping $99.34 for 17000. Your choice.

Until you get the hang of it, prepare to experience frustration in online matches. It is baffling to me that there’s no practice mode or something similar so that you’re not forced to make a fool out of yourself in online matches until you get decent at the game, but life is hard.

After some matches, though, you will be able to systematically do good shots and you’ll feel more in control of the game. Normal matches are tense because you know that if you make one mistake, you are probably out. The mechanic for deciding who wins in a draw is very interesting and matches can be decided by just portions of a yard.

Regarding online matches, I experienced very few issues with connection. Other games with a higher volume of players have constant connection issues that plague the online matches. However, everything ran smoothly here aside from a couple of seconds of reconnecting dialogs here and there.

However, the problem was with the matchmaking itself. While I was a proud holder of 18 trophies, I got mixed with a guy who had 47, all with fancy clubs and deluxe balls. All I could do was hope for a mistake, which he obviously didn’t make because he was more experienced.

As always, there are two sides for the graphical aspect. The first one is the user interface, which I like in this game. A lot of animations are present and buttons are very easy to press. Even though sometimes you can get the impression that it is too busy, it works fine most of the time. The in-game help for controls is very responsive and looks good.

Even though sometimes you can get the impression that it is too busy, it works fine most of the time. The in-game help for controls is very responsive and looks good.

However, the graphics in matches themselves leave a lot to be desired. Elements such as trees, grass, and bushes look sub-par, and when you compare them to other games, they look truly archaic and outdated.

This is very noticeable on the screen where you choose the direction of your shot before actually hitting the ball. Trees and other nature elements are very low-detailed and textures are either bad or nonexistent.

There are a few sounds effects to accompany your actions in the game, such as when you hit the ball, some claps when you do a good shot, and the characteristic sound the ball makes when being introduced into a hole. Also, there’s a voice who says “Perfect Shot” when… Wait for it… You do a perfect shot. However, that’s it.

I’m serious. Tapping elements on menus yield zero audible feedback. Actually, there’s no background music, neither in the menus nor in the matches. At first, I got a little afraid because I thought that my phone’s speaker was giving in. However, after realizing that it worked fine because the game itself made some sounds, I realized how flawed sound is in this game.

To add insult to injury, the sound effects come turned off by default! I seriously have no idea of what is going on here. A quick trip to the options will change that, though.

Through relatively simple controls and a great emphasis on online interaction, Golf Clash manages to provide entertainment. Also, thanks to the possibility of participating in several tournaments and upgrading clubs, the game has a replay value aspect adhered to it. Where it suffers is in the graphics and sound department, with very low-quality graphics and inexplicable omissions regarding sound. Also, a lack of offline gameplay is a bummer. However, give it a shot and see if you can overcome the bad aspects and enjoy the good ones.

Download and install Golf Clash from the Google Play Store.