During the pandemic, most of us have become “trapped at home” and looking for ways to entertain ourselves and our families. Thankfully, there have still been plenty of new movies and TV shows to enjoy. In fact, this has lead many of us to upgrade our home theater equipment.

While a new TV or a soundbar might be one of the most obvious choices, one of the more interesting things to do is add a reactive bias lighting system to the mix. This is nothing new, Philips has been offering reactive bias lighting for many years now, starting with its Ambilight TVs, and later with the Philips Hue Play Bar and Philips Hue Play Sync HDMI Box.

Unfortunately, all of Philips solutions are way more expensive than what I am willing to pay for the experience. Imagine my delight when I found out that Govee offers a reactive bias lighting system for nearly half the price.

Even better, Govee was nice enough to send out its Flow Pro Light Bars for review, and let me tell you, it’s a game-changer. 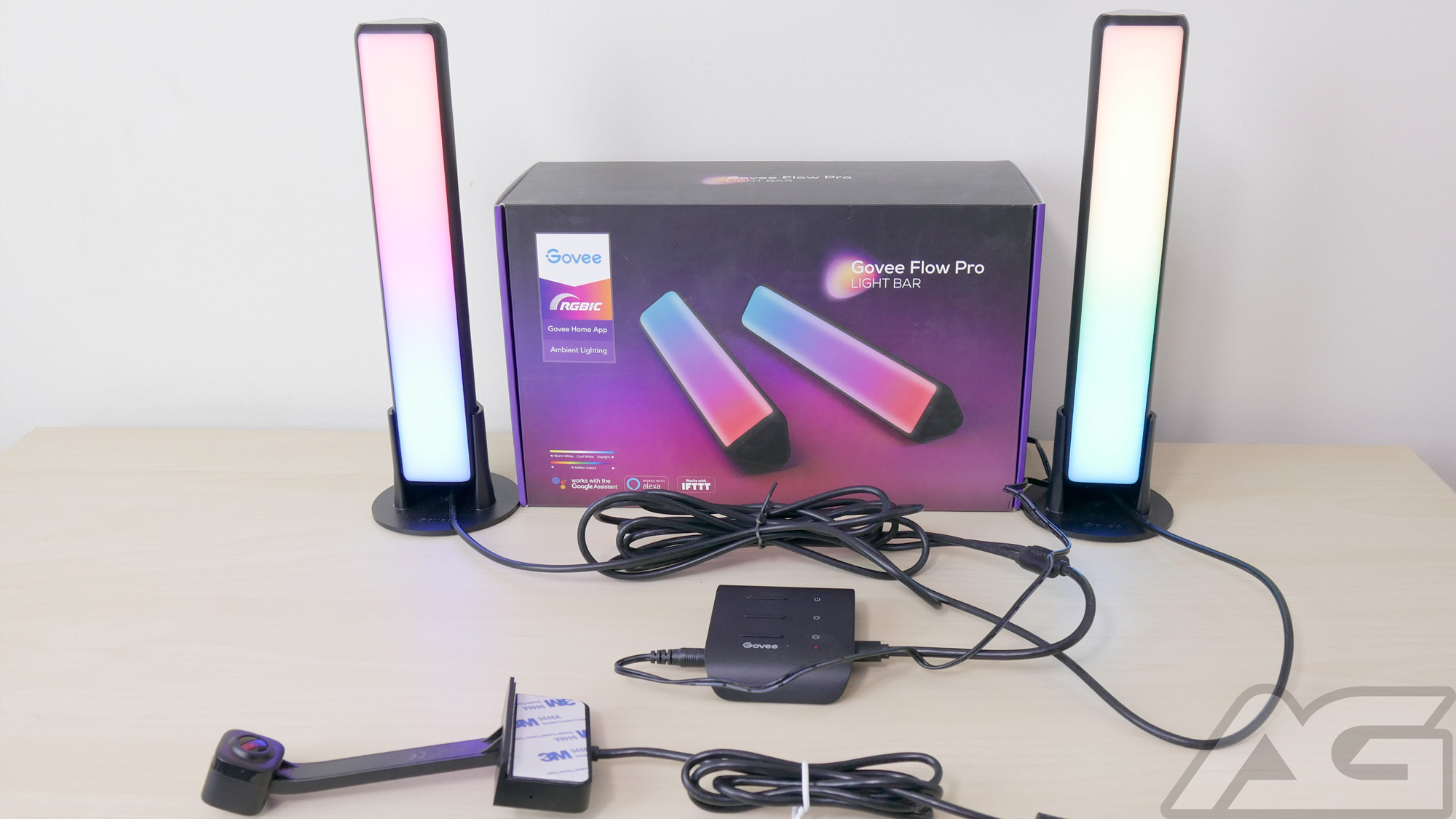 The Govee Flow Pro system consists of two light bars capable of displaying 16 million colors, a controller box, a power adapter, and a fisheye camera to detect the colors on your display.

The box also contains two light stands to hold the lights on your desk or TV stand, as well as two stands that can be used to affix the lights to the back of your TV.

Setting up the Govee Flow Pro Light Bars was quick and simple. While the light bars themselves can be placed in stands, I found that they look their best when attached to the back of the TV. Thankfully, Govee includes two sets of stands and it was easy to test this out and switch if I change my mind.

The Govee Light Bars have a cable coming out of each bar which converge into one singular USB-C connector that plugs into the controller box. The controller box is also where you’ll connect the power cable and the cable for the camera. 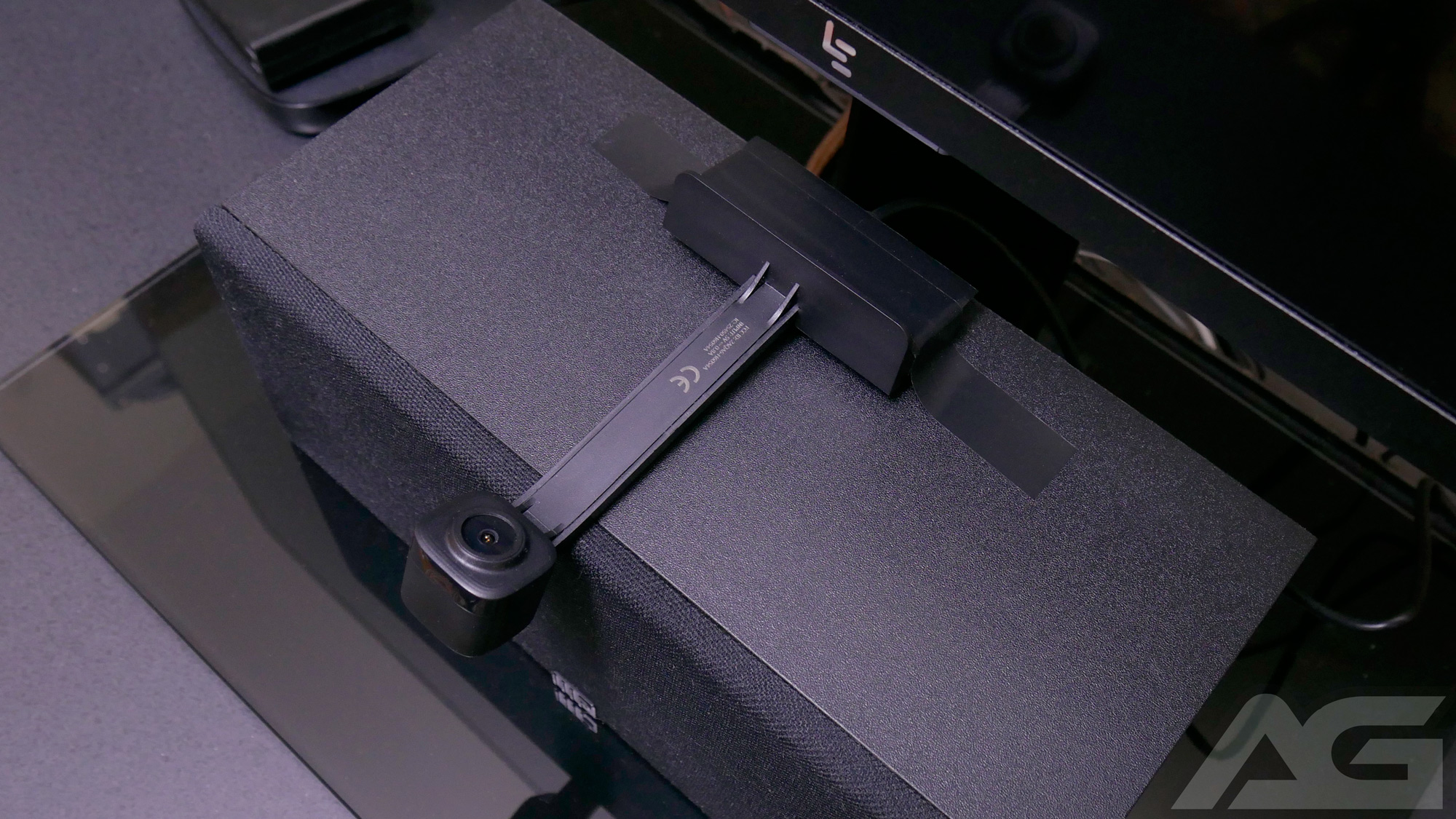 After you’ve placed the lights where you’d like them, you’ll need to attach the camera. Govee offers two different placements, either in the center on top of the TV or on the bottom. In my case, I found placing it on the bottom would be less distracting, but it would also cover up the remote sensor on the TV.

That’s why I decided to tape the camera to the center channel speaker beneath the TV. This is a less elegant solution than attaching it directly to the TV with the 3M adhesive on the camera mount–but I found it was the best for me–and it looks less distracting than having a camera attached to my TV.

Finally, you’ll need to install the Govee app and run through the setup to calibrate the camera and finish setting up the lights. Govee includes some orange rectangles to attach to your screen to calibrate the camera, but I found this video on YouTube made it much easier and without having to measure the center of my TV or stick anything to the screen. 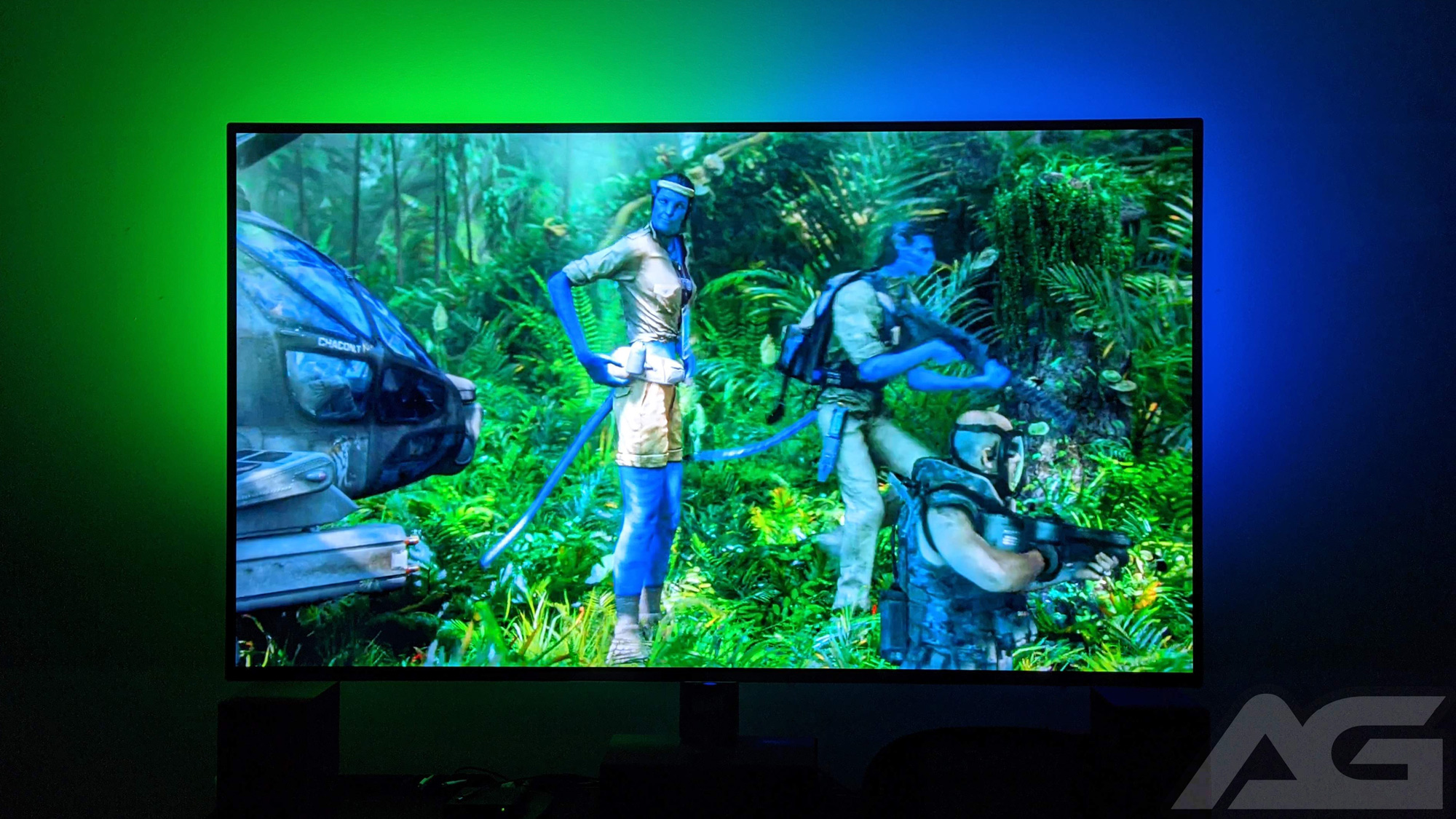 As much as I’ve always wanted a color-changing bias lighting system, I was concerned that it would be too distracting. However, after trying it out for myself, I realized that’s not the case at all. Plus, if you do find it distracting, you can turn down the brightness or just set it to a boring single color like white.

Watching movies and TV with the Govee Flow Pro Light Bars was a new immersive experience. It made the content on the screen seem more interactive and brought it to life. Scenes with explosions filled my walls with dancing hues of orange and red, while dramatic moments where the screen goes dark and everything goes silent had more impact as the Govee lights blacked out the room.

It made watching my favorite movies feel new again; it’s not often you get a piece of equipment that makes such an impact. In fact, it enhances the experience so much that I can’t wait to watch all of my favorite movies again just to see them with the Govee Flow Pro Light Bars. 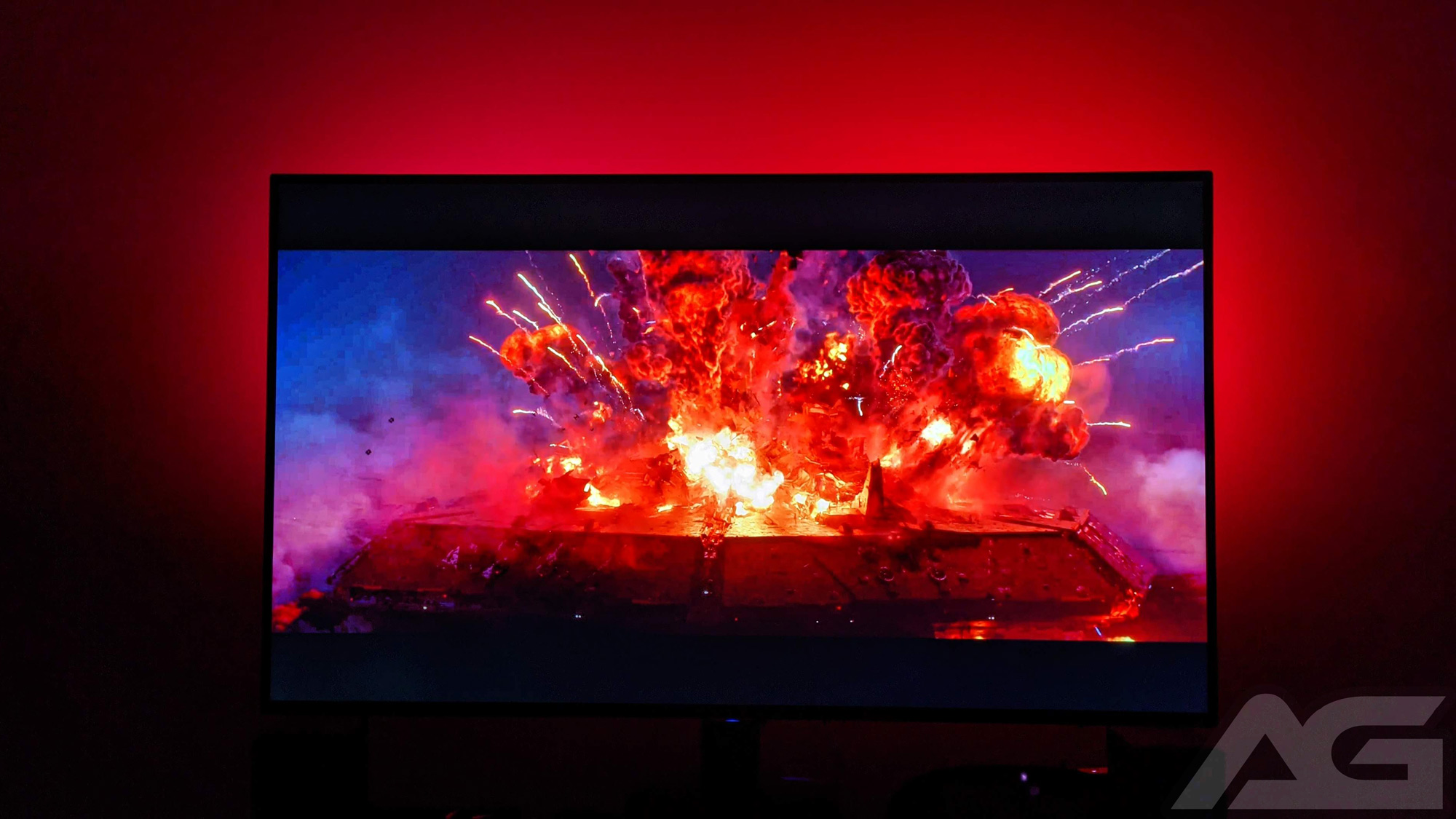 Now, as much as I love the Govee Flow Pro Light Bars, they are not perfect. Many movies consist of scenes that use a lot of black or white. Couple that with how the camera samples colors, the fact that it uses purple hues for black and pink hues for white, and you end up seeing purple and pink behind the screen for most movies and TV shows. I also found it oftentimes misinterpreted light yellow and skin tones as white, which means you end up seeing pink quite a bit.

The Flow Pro Light Bars were most impressive for animation or movies with vibrant colors. Otherwise, you get a heavy dose of purple and pink hues, but honestly, that’s still way better than no bias lighting or a strip of white LEDs behind the TV. 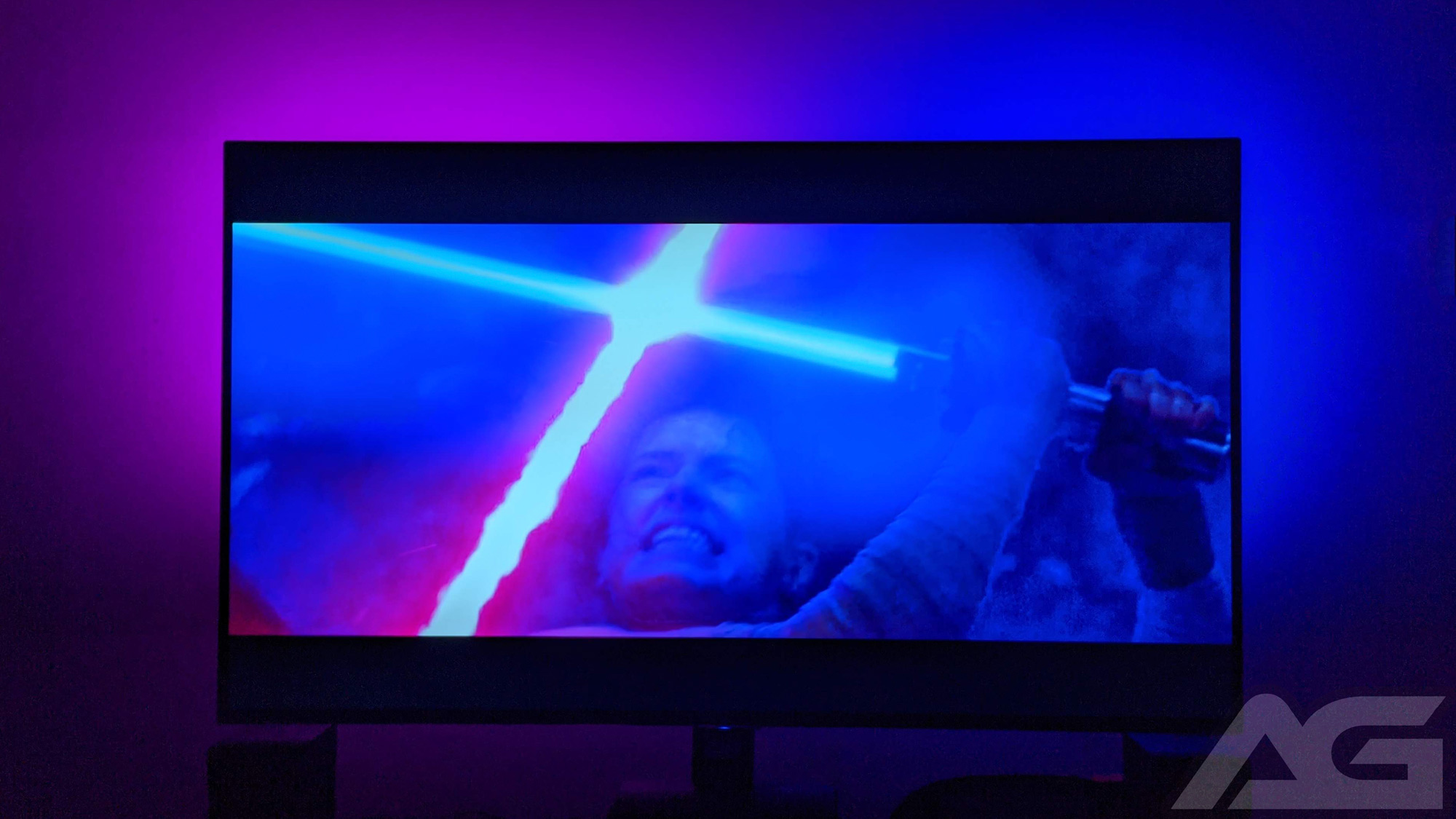 Finally, we get to one of the most important parts, how you power the light bars on and off. Govee integrates with Amazon Alexa and Google Assistant which makes it so convenient to power the lights on or off with voice commands.

Since I also use the Logitech Harmony Companion with my TV, I was able to turn both the TV and Flow Pro Light Bars on or off with a single voice command, and it worked seamlessly.

Additionally, you can also use Govee’s app to control the lights or set timers.

I give Govee a lot of credit for its app, it is so polished and packed full of features without being overwhelming. It made setting up the lights and managing them simple as can be.

There was even a firmware upgrade after I first opened the app which enabled a new split lighting mode allowing the light bars to display different colors on the left and right. This was a complaint early on with the Govee Flow Pro Light Bars and it was fantastic to see the company add the feature with a firmware upgrade.

Beyond that, you can control the brightness, saturation, switch which light displays the left or right. It’s even easy to recalibrate the camera in case you move it or install the light bars on a different TV.

Then there are all the different modes to choose from such as music, color, scene, and creating your own DIY scenes. 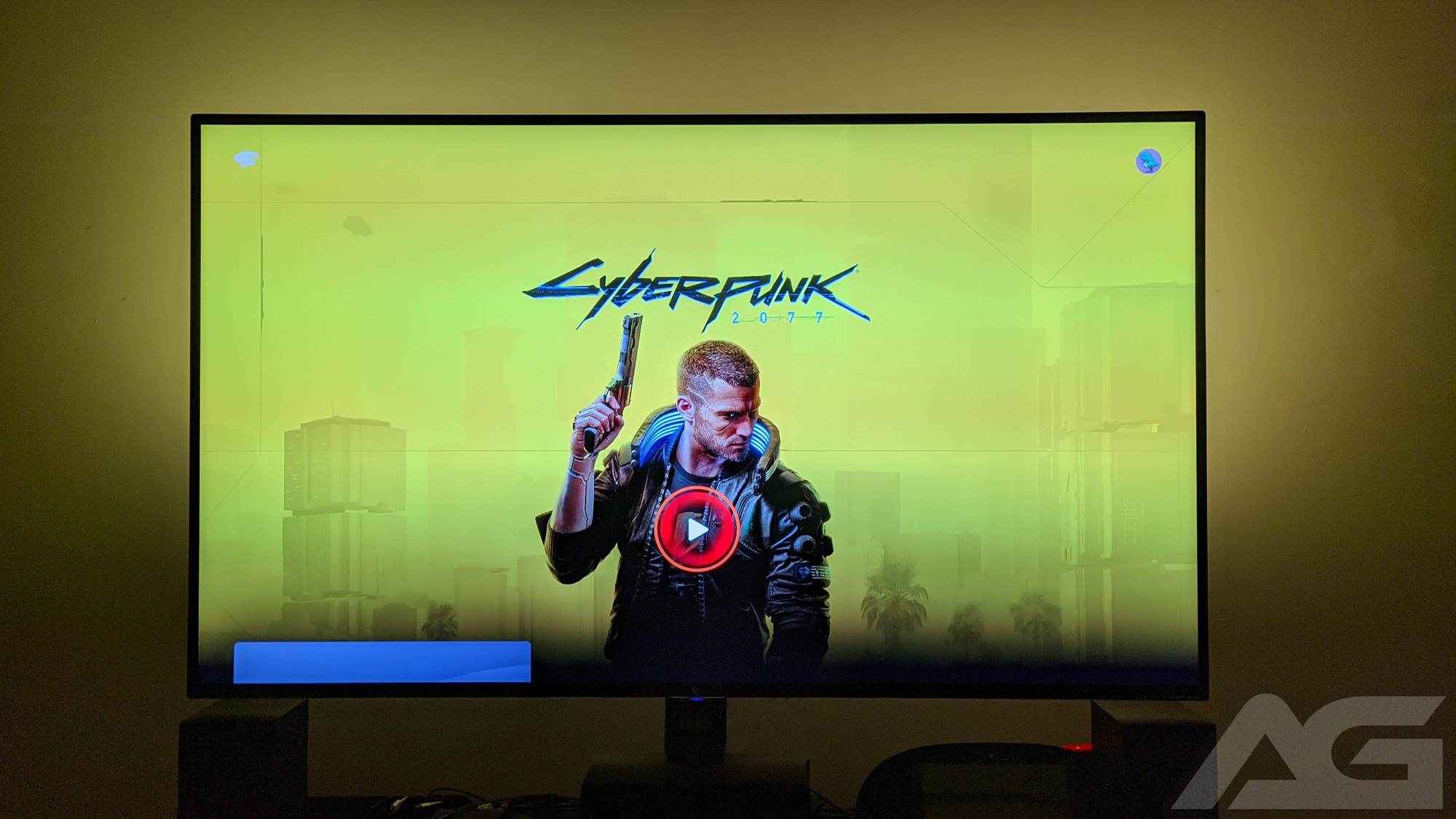 Going from having no backlight on my TV to one that reacts to what’s on the screen was a game-changer. The Govee Flow Pro Light Bars bring content on the screen to life, and trying to watch content without them now feels lifeless and dead.

Every time I put on a movie or TV show–whether it’s a brand new release or an old favorite–all I can think is, I can’t wait to see how the Govee lights look with this.

I always wanted to try out bias lighting but I never realized how much of a difference it would make, and with Govee you don’t have to empty your wallet to get this transformative experience. The Govee Flow Pro Light Bars sell for $80, and at the time of writing, there is also a $10 off coupon. Either way, this is much more affordable than the competing Philips products.

Buy from Amazon Buy from Govee

Up for review today is Logitech's new MX Mechanical keyboard. Learn more about the device and find out if it's right for your needs.
Read more

The MW75 Active Noise Canceling Wireless Headphones are Master & Dynamic's latest offering. How do these fare in testing? Here's our review.
Read more

With the recent launch of the MX Master 3S...
Read more

Up for review today we have the ILIFE A11...
Read more
Advertisment

Phone screens keep getting a little bit bigger with each generation, sometimes even pushing the boundary of 7-inches. At the same time,...
Read more

When it comes to buying smartphones, things are much different in 2022 than they were just a few years back. Notably, it's...
Read more

Smartphones are great for so many things. They help us stay abreast of the latest events, keep in touch with our loved...
Read more

If you're a fan of puzzles and time wasters, you've probably spent time with a Rubik's Cube somewhere along the way. And...
Read more

Xiaomi sub-brand POCO is back with another pair of powerful budget-minded phones that squeeze in higher end features with the F4 and X4 GT.
Read more

Unlinked: OFF, Skimlinks: OFF in this HTML block -->The email has been around for ages. Ok... maybe not ages but...
Read more