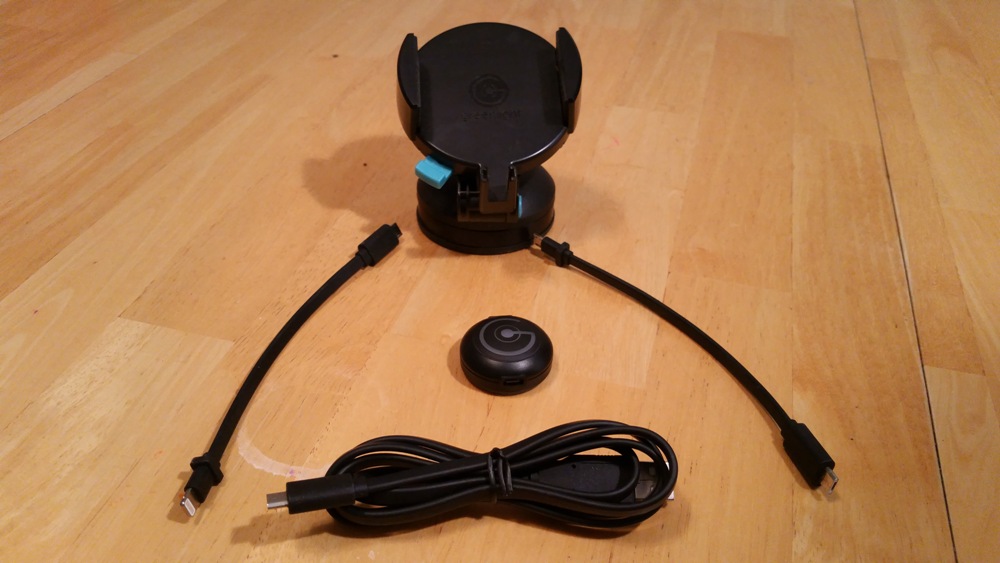 Driving is not an option in our world. We rely heavily on vehicles to get us to where we need to go. Over the last few decades, we have seen huge leaps in car safety. Better seatbelts, airbags and even more secure ways to install a car seat for babies. We have tons of campaigns to encourage safer driving and discourage using our phones while driving. Fact is we know better and yet we still do it.

We have a major addiction to our phones. We feel the need for it to be by us at all times and since that’s not going to change the founders of Greenlight decided to create a way to use your phone to make us better drivers.

Once Greenlight is launched it begins recording on a loop. It will continually record the until you turn it off. When a trigger incident occurs, such as hard braking or quick take offs, Greenlight automatically saves the clip to your device and the cloud.

There are two parts to Greenlight, the hardware, and the app. Let’s start the walkthrough with the hardware itself. Greenlight has a typical sized cradle that is similar to most cradles that hold phones or GPS devices. It has adjustable sides that can conform to any size phone, including phablets. A suction cup bottom teamed with a sticky adhesive ensures that the SmartCradle stays firmly attached to the surface of your dash.

It also features recording in portrait or landscape mode by simply turning the phone sideways in either direction you wish to place it in. The SmartCradle supports tilt adjustment by pressing a small green button and placing it in the most comfortable viewing position.

Since we’ve covered the hardware, let’s go to the software. There is an app for both iOS and Android. Here we will be covering the Android version. When installed you will go through a short tutorial and it automatically goes into recording mode. At the bottom of the main screen, you have the options to stop the recording, take a snapshot, or save which does exactly the same thing as the green button which will be explained later. 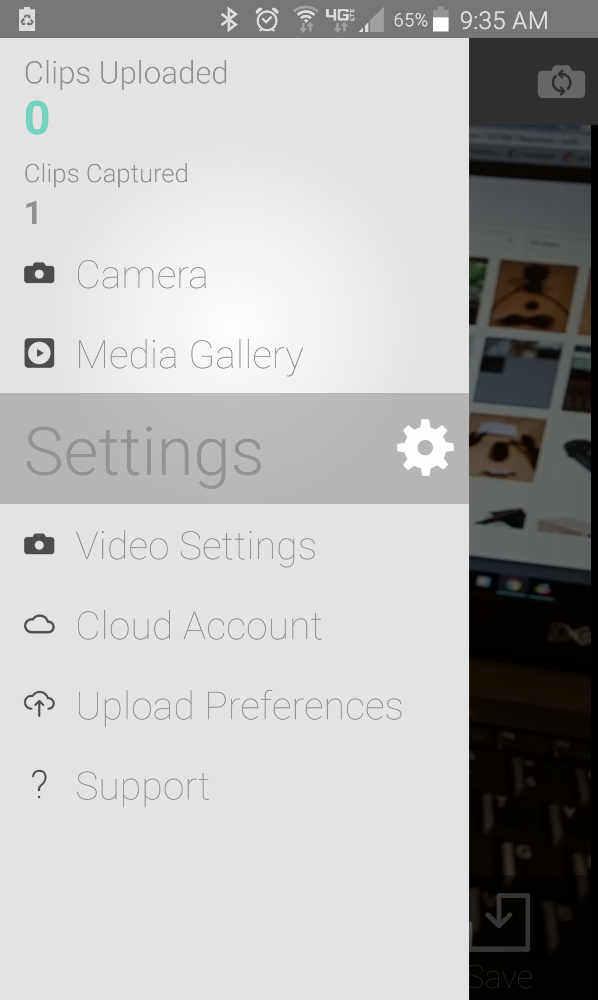 The hamburger menu gives you several options. View your media gallery where you can choose what to do with your clips. Configure your video setting, like the length of recording and quality. You can also choose where to upload your clips and your uploading preferences.

The overall design of the entire product, both hardware and software are clean and elegant. The SmartCradle and button operate properly, while the app is easy to understand and navigate.

Let’s start this by saying this is a hard product to test safely. The very nature of it almost demands you to be in a wreck to trigger the camera. However, there were a few times when I took off a little quicker than normal, it was enough to trigger the saving of the recording.

There is also two other ways to trigger the save feature. Simply tap the button with the G on it and it will save the recording. You may also tap the save button at the bottom right of the screen in the app.

Speaking of saving the recording you probably wonder how that works. By the time it recognizes that you are in a wreck, wouldn’t it be too late to record the incident properly? Glad you asked!

The Greenlight app gives you four different recording lengths from 30 seconds to three minutes. For this example, we will say your recording is set for one minute. When an incident trigger occurs it will take the previous 30 seconds before the trigger and the next 30 seconds after the trigger and save that portion. Anything not in that time frame is automatically dumped and you don’t have to worry about your phone being filled up with the useless footage. 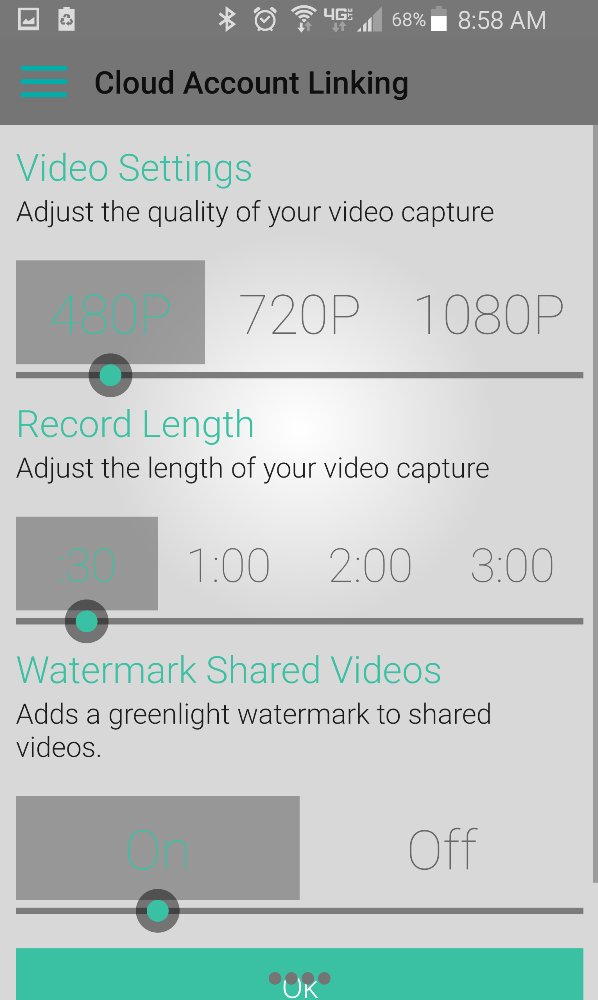 There are other settings that are available including three video quality options from 480p to 1080p, but 480 is plenty. You also can upload your videos to either your Google Drive or Dropbox accounts. And don’t worry about automatic uploads, the default setting requires you to manually upload them. However, you can upload them in WiFi only or when you have service.

When receiving a call or text you will be removed from Greenlight but once you’re done you can simply return by tapping the button.

Coming down the road they have some other cool features not yet available in the beta that I wanted to cover. First, they will collect your driving data like average speed, braking profiles and more to give you a look at where you can improve.

Next Greenlight will give you a driving score just like a credit score. They do this by comparing your data against the rest of their data and determine your driving score. You can then track and get tips on how to improve your score.

They are also working on accessibility to ensure you can use tools like maps, music, and communication safely without putting yourself and others at risk. There is still many places they can take this app. But it’s still in early stages, so they need to concentrate on the first final product.

Greenlight offers a lot of great features and makes it a little easier to let go of your phone. It’s a plug and plays product, literally. Once you dock the phone it starts up. Now I have to mention the beta flaw that I have encountered with this product. I call it a beta flaw because that’s exactly what it is. 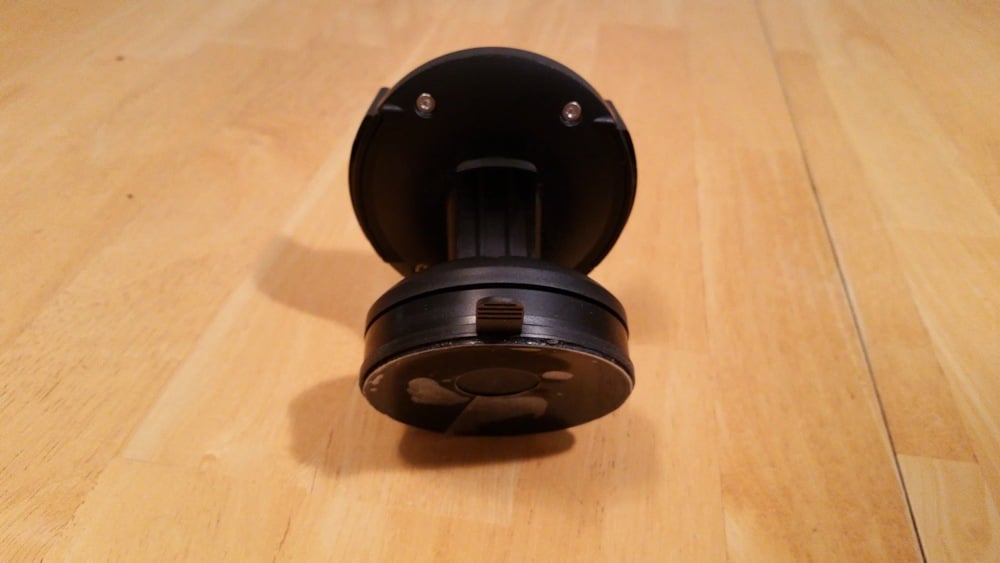 If you are in an area where temperatures are high, it’s very likely you could experience overheating of your phone. This can also happen with older phones as well. A simple adjustment like lowering the resolution of the recording to 480 can ease the strain on the processors which in turn reduces the heat.

Now I could have simply ignored this in the review, but that wouldn’t be very honest nor would it have given me the opportunity to give praise to the team behind Greenlight. How Jason responded to the problem and worked hard with me to solve this issue shows how much they care about their product.

Now you have to remember again what I’m testing is a beta product and shouldn’t show up on the final release. There is a lot of time between now and September.

Greenlight takes the best features of driving cameras and elements of snapshot, from places like progressive and combines them to make a great product. There is potential for this to save money on insurance if they choose to accept it once it proves to be accurate.

This is by far one of the coolest gadgets I’ve had the pleasure to review. It’s a safety oriented product that doesn’t feel gimmicky. It offers a simple to use product that works well. The team behind Greenlight is working hard to take safety to the next level. Greenlight doesn’t ship until September, but they are taking pre-orders right now. At $50 it’s a reasonable price and great time to get in on the ground floor.