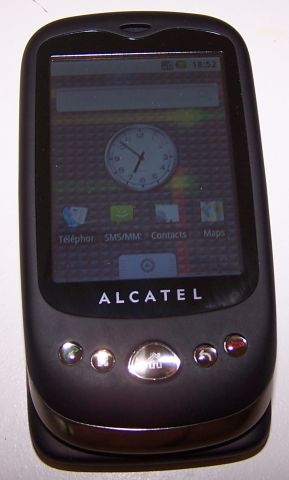 French website SmartPhoneFrance (In English via Google Translate) managed to get a preview unit of the upcoming Alcatel OT-980. This phone is an entry level that was first unveiled at MWC last February and will be available later this summer in France. The major difference between this phone and some other entry level phone like the HTC Wildfire is the form factor.  It is a portrait slide-up with a small keyboard.

Overall, the specifications are nothing really fancy, it will have Android 2.1 (no words on 2.2) so that is not a bad start for new comers to Android. The major weakness is its screen, a resistive 2.8 inches screen with a small resolution of 240×320. This Low Density screen will not be great to browse the web but it will also limit the number of application available to the device. Otherwise, it has everything you can expect from in an Android device: Bluetooth, WIFI, 3G, MicroSD, MicroUSB, 3.5mm for headphones and handsfree kit, GPS with compass, accelerometer, 2 Megapixels camera and a 600Mhz processor.

The front has 5 keys: Menu, Home, Back and also Call and Hang-up. These last 2 hardware keys will help this phone to be accepted by novices who expect to find these keys that you don’t find anymore on many Android devices. As for the sliding keyboard, the test unit SmartPhoneFrance tested was a QWERTY, it will be AZERTY for the French market, it might mean that this phone will be available in other countries. In their review, SmartPhoneFrance said that while the keyboard is small, it is very pleasant to use.

So, here is a new low budget Android device that would certainly would not be picked up by Android power users but that would be a nice start for new comers. What do you think, would you recommend it to someone who would want a simple phone with Android? 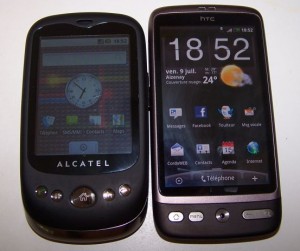 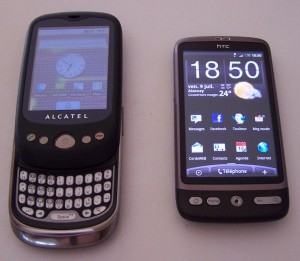