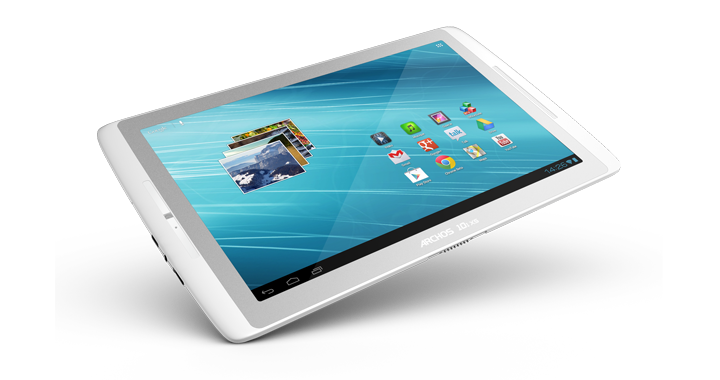 What we liked:  Super thin, lightweight, and sexy in white, the Archos 101XS looks beautiful and feels solid in hand.  It’s the best effort from the company yet and the optional accessories add to the value.  We’re also glad to see the Coverboard included in the box.  Bonus points for a nearly stock Android 4.0 experience.

Room for Improvement: It’s going to be tough to sell this device at $400 against bigger companies with more advertising capabilities.  Even with its Coverboard and extra ports, the 101XS could stand to drop a few bucks off its price tag.  Those burned by a previous Archos tablet experience may not be convinced of value.

Review at a Glance: Archos was previously in the poor spot of trying to compete with companies like Samsung and Motorola for a piece of the Android tablet market.  The new Coverboard immediately puts it in the conversation with Asus Transformer series.  Thanks to a lower price point, the 101XS is a great bundle in the box, but it’s just a tad too high for average consumers.  With most folks thinking “$200 tablets”, Archos will have a challenge convincing people to open their wallets a bit wider.

No matter what you look at, the first thing you will notice about the Archos 101XS is its white and grey color. While most companies are going with variations of grey or black, it’s refreshing to see this starkly different color scheme.  The outside of both the display and the Coverboard feel somewhat soft to the touch, especially on the white parts. 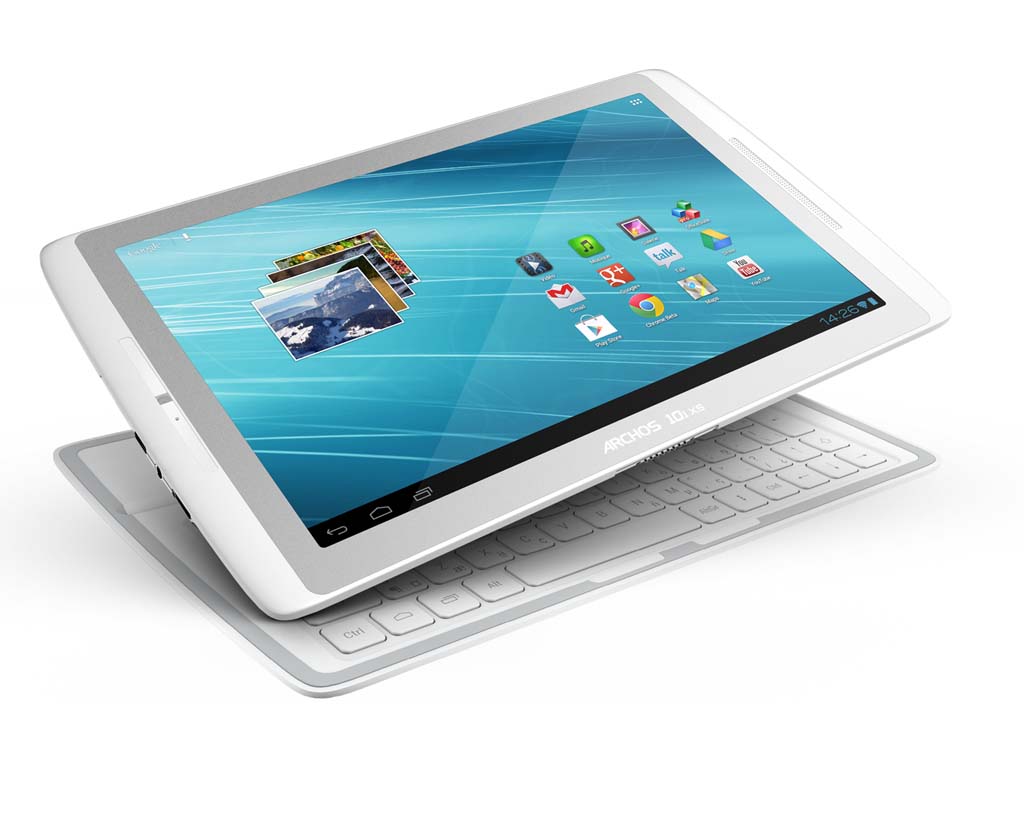 As for the grey metal plate, it comes across as a “let’s glue this piece on and we’ll be finished” addition and seems very easy to scratch.  We understand the need to go with metal (magnetic Coverboard) but we’d like a little more attention for future models.

A front-facing camera is found centered on the left hand side while the speaker sits across the display on the other side.  When sitting on the desk on a tablet stand or the Coverboard neither of these bothered us.  Pick the tablet up and hold it on its own, however, and you’ll find yourself covering one or both up.

The volume rocker and power button are found on the right side (landscape) and feels okay when docked.  Again, picking the tablet up, you want the camera up top and the speaker across bottom front.  Sadly, this puts volume and power buttons at the bottom edge and in a very awkward spot.

Archos is one of those manufacturers that often integrates ports that don’t make it into other brand tablets.  The same goes for the current mode as it includes microSD slot (up 64GB), micro-USB, a 3.5mm headphone jack, and a mini-HDMI port.

Charging is done via micro-USB with plugs on both the tablet and the Coverboard.  We liked that the plug is directly in the back of the keyboard and not sticking out of some random side or front. Another plus in micro-USB is that we have so many of these lying around.  Keep one near your desk and the Coverboard can sit there semi-permanently.

The Archos 101XS features a 10.1-inch 1,280×800 pixel display and really loves to pick up your fingerprints.   And while it’s not on the level of IPS displays we have seen elsewhere, we were pleased with the vibrant colors and video playback.  There were a few instances where we found the display not registering swipes or taps, but nothing worse than other tablets we’ve used. Blacks and whites were crisp and the overall picture impressed those who saw the tablet

We’re big fans of the Coverboard however we understand that it’s not perfect technology.  Heck, even trying to pull the display apart from the keyboard/cover is not always easy.  We tried to be gentle as to not risk dropping the Archos 101XS but found it challenging on more than occasion. In fact, we’ve already noticed that the Coverboard no longer seems to fit snug against the display. Perhaps as a result of trying to pry the two apart to open them, the plastic keyboard could be stronger.  Of course if you error on the other side and make the magnets weaker, then you’ll have complaints of tablets that don’t have a “snap together” feel.  You’re supposed to be able to simply twist and pull the two halves apart but it is never that easy.  We fear that extended use of the tablet could result in a less-than-desirable locking.

We are used to having a spot for our palms to rest on netbooks, notebooks, and even the Transformer Pad dock.  The Archos does not give you anything to set your hands on and could stand to be a little deeper.  However, to do anything along those lines, then we’d not have a perfectly-sized Coverboard.

Unlike the Transformer Prime, the Archos 101XS Coverboard does not charge your tablet while docked.  That’s certainly not a deal breaker for us, and it was to be expected considering the lower price point.  If you want something that keeps a spare charge for your tablet, then you’ll have to pay a premium at this point. 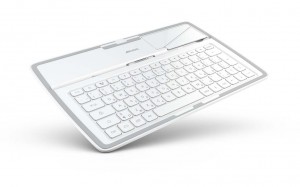 Although it sounds like we are not digging the Coverboard here, we actually appreciate it quite a bit. It’s thin, very light, and the Android-specific buttons are great.  As much as we like general Bluetooth keyboard, nothing beats one that has dedicated buttons for home, menu, brightness, lock, and more.

At nearly half the thickness of the Transformer Pad and dock, the Archos Gen10 comes across super sleek and modern looking.  Regardless of what is under the hood, the weight and design drew “oohs and ahhs” from our friends and family. 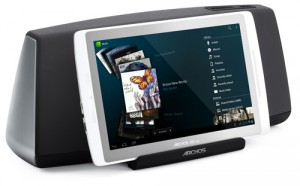 Archos has created a proprietary port across the bottom of the Gen10 series and will have its own line of custom accessories.  A 32 watt Speaker Dock lets users charge their tablet while hosting USB flash drives/hard drives and playing music.  Stepping down a notch, the Docking Station does all the same, save for the speakers.  In its place are RCA audio ports for your home stereo or receiver.

Archos does very little to the stock Android 4.0 experience and that’s always a plus.  Aside from an enhanced media/audio codec support, the Ice Cream Sandwich is what you see on Pure Google devices. Of course the question of, “Where’s Jelly Bean?” will come up of which Archos has an answer – somewhat.  According to the hardware maker, the Android 4.1 update is expected sometime in the fourth quarter.  Given that the tablet is not due stateside until November, it’s possible that it launches in the U.S. with the Jelly Bean experience.

There were a few pre-installed applications on our review unit including News Republic, OfficeSuite, Asphalt 6 HD, Fruit Ninja Free, and Spider-Man HD.  Toss in a few other Archos apps and you have a limited set of “bloatware” titles.

We’ve really enjoyed watching Archos come into their own with Android tablet efforts.  As a company we’ve rooted for over the last decade or so, it’s nice to see the company continue to evolve.  We applaud the decision to go with the Coverboard and accessory port however it remains to be seen whether it is worth the gamble.  At $400, it is tough to get people to consider it over a device form a bigger brand such as Samsung.   Thanks to the Kindle Fire and Nexus 7, the typical person only wants to spend half that money.  Of course, those who have plenty of disposable income are already considering that stuff out of Cupertino.

Indeed, Archos has rarely had much of a retail presence for its Android tablets.  Unless they break out some serious ad money and show off the enhanced experience and features, consumers simply won’t know about the device.

We like what we see in the Gen10 series however we don’t love everything.  Given some time with the accessories and future models (8-inch, 9.7-inch), we may come to appreciate things more.  That said, we recommend you get some face time with the 101XS before making your purchasing decision.