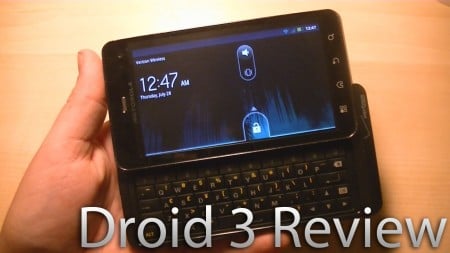 From the first, to the second, and now the third, the Droid series has been one of the most promoted and well-known Android devices on the market (at least in the U.S.). The Droid 3 was defiantly a huge upgrade from the Droid 2, which lacked some key features for its time. It’s obvious that Motorola went all out on the Droid 3 as far as specs are concerned. The Droid 3 offers a whopping 1GHz Ti-OMAP 4430 Dual-Core processor, 1080p HD recording, and the latest version of Android (2.3.4 Gingerbread). Some other specs include:

Motorola managed to cram all this hardware into a device that is even slimmer than the original Droid. If you are looking for a flagship device, I would look again. In my opinion, the Droid 3 is by no means a flagship phone for Verizon. Big Red’s next flagship device (according to speculation) will be the Droid Bionic. At any rate, the Droid 3 will run you only $200 with a new two-year contract, or $460 without a contract. Check out my unboxing of the device below.

I think Motorola did a great job with all of the Droid 3’s buttons. The power/lock button is centered on the top of the device and has a firm, yet comfortable feel to it. The volume buttons are located on the right side of the device, and the capacitive Android buttons (Menu/Home/Back/Search) worked very well. They were responsive and the haptic feedback never experienced any lag. For a hardware tour of the device, check out the short video below.

The Droid 3 offers a 5-row QWERTY keyboard, the 5th row being a dedicated to numbers. I’ve used other Droid keyboards in the past and they always seem to fall below par for me. My first impressions of the Droid 3’s keyboard was good, and has remained throughout my daily use of the device. The keys have a good amount of spacing between them, great feedback, and a rubberized feel. 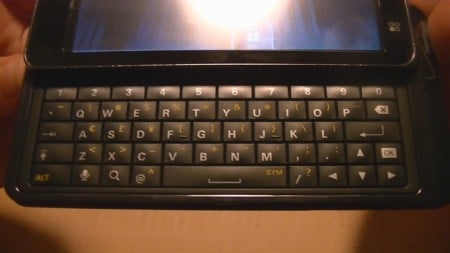 The Droid 3’s beautiful qHD display is, well, beautiful. Since the resolution is 960×540, pictures and web browsing look bright and crisp. The Droid 3 has a high resolution camera and HD camcorder, so you can view your HD videos full-screen without any black bars. Besides the look, the screen is very responsive and the haptic feedback works perfectly.

The Droid 3 has a full 1080p HD camcorder built in. To start, the camera works perfectly with the phone, the frame-rate never drops, and the camcorder never freezes. The 1080p quality is nothing like a real camera would obtain, although it comes close to the 720p quality of the Flip camera. I shot a brief video with the camcorder, which you can check out below.

Whatever they’re calling it nowadays, the new MotoBlur is very nice and definitely a step up from the old MotoBlur. The new Blur is perfectly suited to work with the dual-core processor and 512MB of RAM. It offers a 4-icon dock, and users can change 3 out of the 4 icons (4th is the app drawer). I thought I would quickly jump to ADW or another alternate launcher, but I surprisingly enjoyed the new MotoBlur. Along with the new dock, Motorola added a horizontally-scrolling app drawer and a “3D” style homescreen scrolling effect. Blur brings new widgets that can be resized. My personal favorite is the new contacts widget, which uses a swiping gesture to bring up all of your favorites. All of the new “content” widgets are scrollable, even when used with third party launchers.

The Droid 3 has an 8MP camera that produced wishy-washy shots at best. I think the camera could have taken much better shots than it did. I did notice a good bit of lag when snapping photos. Motorola offers a cool “panoramic” effect that’s built into the camera, but when using the effect, photos are saved 2/5 times. 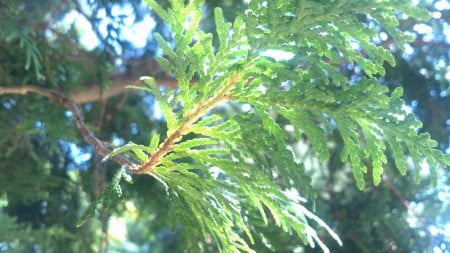 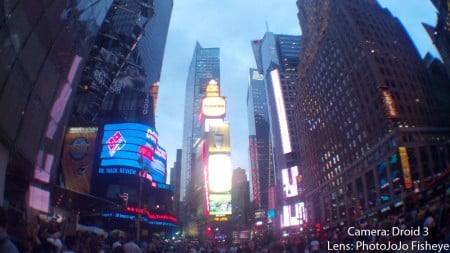 The phone only lagged out a few times, but never to the point that I had to pull the battery. I think the main reason for any slight lag is MotoBlur. Although the improved Blur is much better, we can’t escape the fact that manufacturer UIs cause lag here and there. The only apps that seem to lag at all are system applications. Of course, Blur can’t take all the blame, because a dual-core processor should be able to cut through the UI like butter.

Before I got my Droid 3, I read on various blogs that the it has significant battery life. Because of this, I opted to not get an extended battery. That was a bad idea. It may just be me, but the battery life is not the best. I really dislike how many Android phones have horrible battery life, and the Droid 3 only reaffirms that.

With an impressive dual-core processor, newly revamped UI, and the latest version of Android, the Droid 3 is the perfect option for almost any user. The phone is nicely priced at $200 with a new 2-year contract, and the keyboard is impeccable. With the new keyboard and faster speeds, any businessman or power user would enjoy this phone. With the full 1080p HD camcorder and a decent camera, photography and cinematography junkies would also love this phone.

Overall, I do enjoy using this phone, and I am glad I chose to use it as my day-to-day phone. Now I just need to grab an extended battery. Don’t forget to watch my full video review review below and feel free to leave any comments or questions after the break! 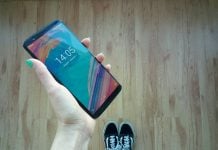 OnePlus 5T review: Still a premium experience on the affordable side