Facebook has had a rocky last few years. The company seemed to be hit with scandal after scandal around user data and privacy. Some of those questions and concerns still remain with Facebook, and it’s the main reason I keep my account inactive.

Despite this, I reactivated everything to take a look at the 10-inch model of the Facebook Portal.

I came away with a new appreciation of how well Facebook can make devices when truly focused. Now, don’t take this to mean the Portal doesn’t have a few misses on the docket. Let’s dive deeper into our full review.

Facebook has done a great job of design here with the Portal. It’s sturdy and well built with smooth lines. You do have a bezel, but I think that’s appropriate to move the unit around to get things focused for video without smudging the display.

Functionality seems to be the all-around main focus of Facebook with the Portal. It didn’t ignore its faults with privacy either. For instance, in the top-left corner, you will find a physical switch that offers two stages of privacy. The first slide cuts off the audio and when pushed a notch further it kills the video as well.

This is a concerted effort by the Facebook team to take an obvious concern by users and offer a well-thought-out solution. You can rest assured that while sitting in your home not being used, that the Portal is fully muted for input.

Rounding out the front is the 114-degree camera array. Honestly, it’s just impressive. The camera is very similar to what Microsoft has done in the past with the Kinect; it finds subjects in the frame and automatically adjusts to include everyone it can. 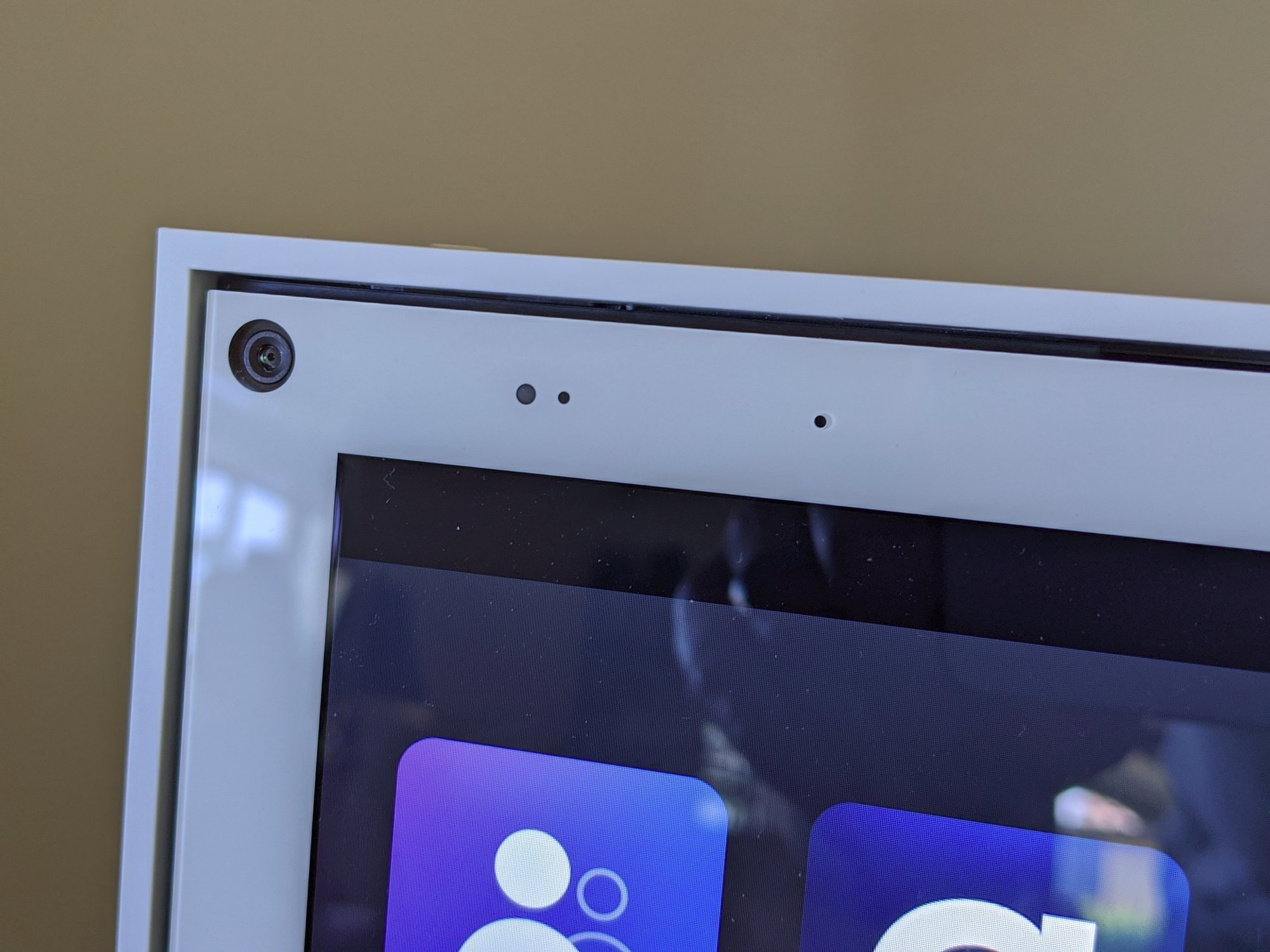 This really shows up when a single person is joined by another individual. The camera will slowly pan out to include the other person or party of people. It can adjust the Portal view to include at least four people comfortably sitting side by side.

In reverse, the camera will zoom back in and focus on the smaller subjects as people leave the camera view. It’s a nice touch by Facebook to keep the users in focus and offer the best video.

To be clear, this does lead to a little fish-eye effect when a single person is present at times. It all depends on the surroundings. With that said the feature’s positives far outweigh this negative.

Around the rear of the Portal, you will find a fairly robust speaker and a single USB-C port. The USB-C port seems to just be for the occasional data transfer but that’s about it.

This port also allows you to use Ethernet to USB-C adapters and video out adapters. Yes, if you want, you can use your TV as the monitor. I’m not sure how many would actually use this but it’s another nice inclusion. 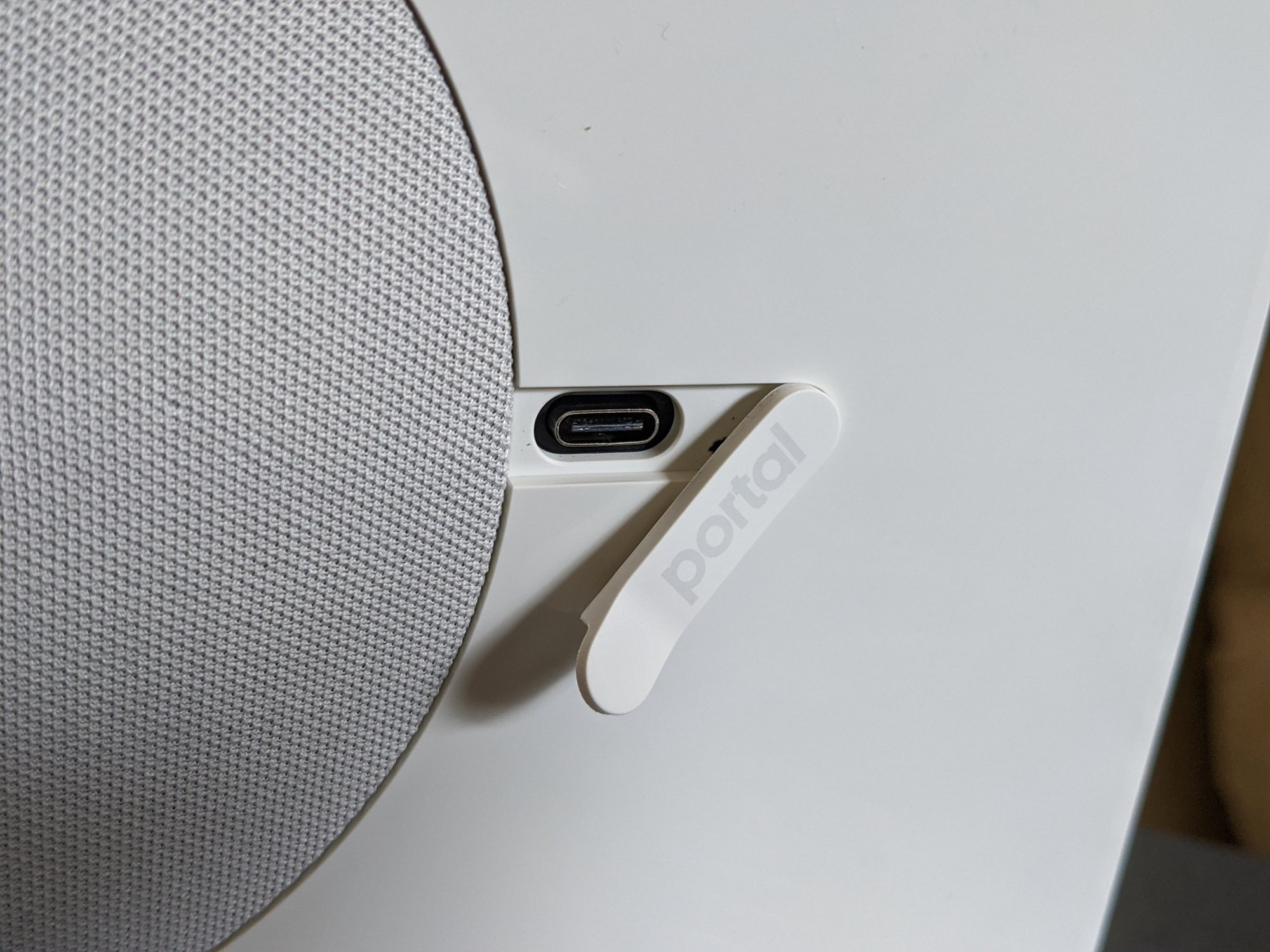 Even when using an external display, the sound is still pumped through the Portal’s speaker. That’s not a deal-breaker, though, as the sound produced by the Portal is very good. It has a built-in subwoofer and highs/mids sound fine.

Video calls I made with the Portal all sounded great with no issues hearing my family. (Thanks to Facebook, my sister got to play with one as well!)

The only other port on the Portal is the power input. I’m really torn on the design of this proprietary power supply. To its credit, Facebook made it functional by turning it into the stand. Also cool, the Portal can be used in landscape or portrait mode.

My complaint is that it’s a proprietary and extremely unique port. I’d have loved to see Facebook use its think tank of engineers to find a way to still have the stand mechanism while allowing it to be powered by the universal standard of USB-C. 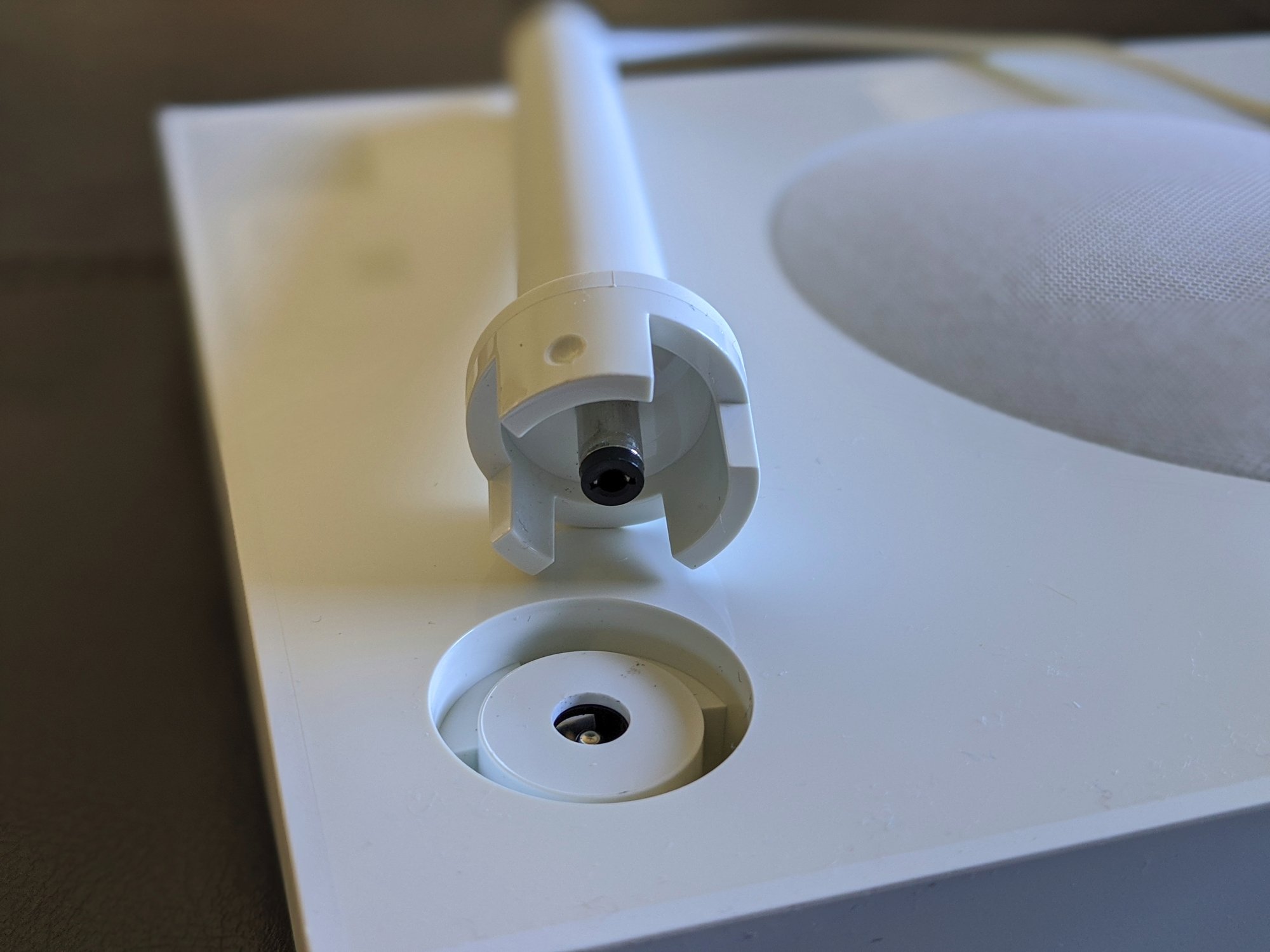 Facebook has limited and expanded on software in some predictable ways. You can only use the Portal with Facebook Messenger and Whatsapp to make video calls. While limited, this is understandable as the company’s most used and recognizable chat apps.

As mentioned in the hardware section, the calls are crisp, clear, and you can even add AR stickers and Snap-style filters to your calls. It’s a fun addition to have when talking to your friends and family.

One other thing that came up a couple of times with calls is that you can stop and start calls via the Portal and transfer to mobile. And vice versa. This is a nice touch for someone who is about to head out the door or who might be just getting home.

My sister had a few times where’d I’d call a few minutes earlier than expected and she answered from her phone. It was nice to know that you could transfer the call to Portal by pressing the contact name on the Portal and it then asks to end the call on the previous device and join.

A side-note to video chat is Facebook claims that the Portal will eventually be compatible with Messenger Rooms. This is the new Zoom-style plugin for Messenger to allow dedicated conference “rooms” with a group conversation. There’s no timeline to when this will be in place but it’s good to know the company is thinking about it.

Other Apps and Functions

Apps are pretty bare. There’s no Netflix, Hulu, or Amazon Prime Video. You’re limited to just Facebook Watch for video content. Spotify and Pandora are both on board, but that’s about it. Additionally, you have a Photo Booth app to send fun AR photos or a selfie to your friends.

There is a web browser that looks to be based on Chromium. It allowed me to access some sites like Plex and YouTube, but Netflix was a hard stop, as was Hulu.

To round out the software side of things, you have Alexa built atop Facebook’s other offerings. This does not get you Echo video calling but does seem to provide almost every other feature.

You can start music via voice, ask it questions, and see your Ring video cameras. Once you connect the device to Alexa it’s a pretty full-fledged option other than the Echo specific video chats.

Who is Portal for?

I struggled with this question. The Facebook Portal is a great device, but it just happens to be limited. On the other hand, it seems to be by design and I think that might be a good thing.

As current conditions have taught us around COVID-19, dedicated apps and devices with specific purposes sometimes shine when they are able to fit their niche. Look at Zoom, for example, and all of the ways people are using it now. The Facebook Portal fills a need, but it just may not be for everyone.

I’ve decided that the Portal by Facebook fills a void in the market that Google, Amazon, and Apple aren’t doing right now. It’s mainly just for video chatting. And it works near flawlessly with an account that billions of people already are signed up and using.

It’s the only dedicated video chat device that I literally had a conversation with my Mom, sister, daughter, and my in-laws. And it didn’t require any of them to download and toil through a new app experience.

I can’t do that with Facetime, Google Duo/Hangouts, or Snapchat. I can’t do that with a Google Home or Amazon Echo Show either. For $180 it’s not an impulse buy, but in the times of video happy hours and social distancing, this is by far the best product Facebook offers. Be sure to hit the Portal product page to find the one that fits your needs. 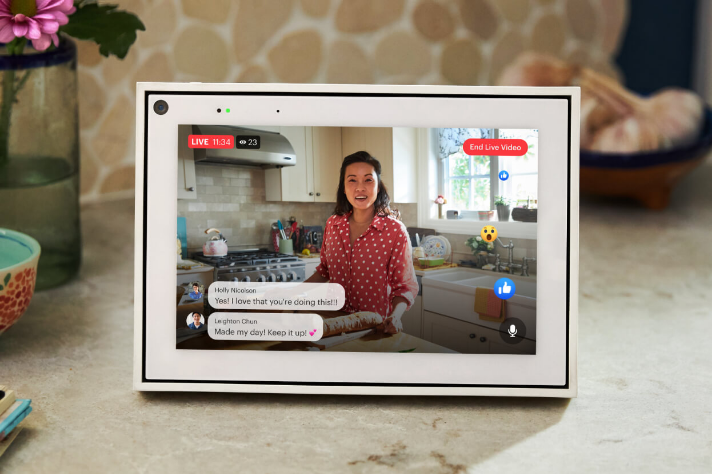 Facebook has come through on a couple of promises with a software update. You can now start a Facebook Live video to share on your timeline directly from the Portal. No longer is this limited to just Facebook’s homepage.

Facebook Live on the Portal is pretty sweet. You can now use the awesome camera technology to have a dedicated live streaming device for your Facebook. 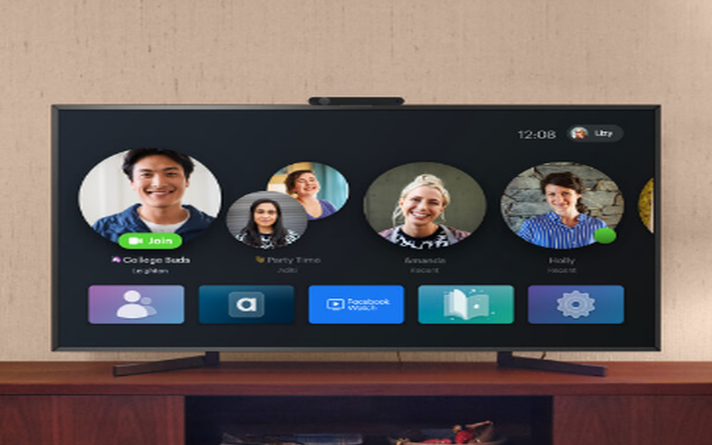 The more exciting update is the Messenger Rooms are now available on the Portal as well. Just like on the desktop or mobile app, you can now chat with up to 50 friends. In times with COVID-19, this brings parity with Zoom but in a dedicated device in your living space. 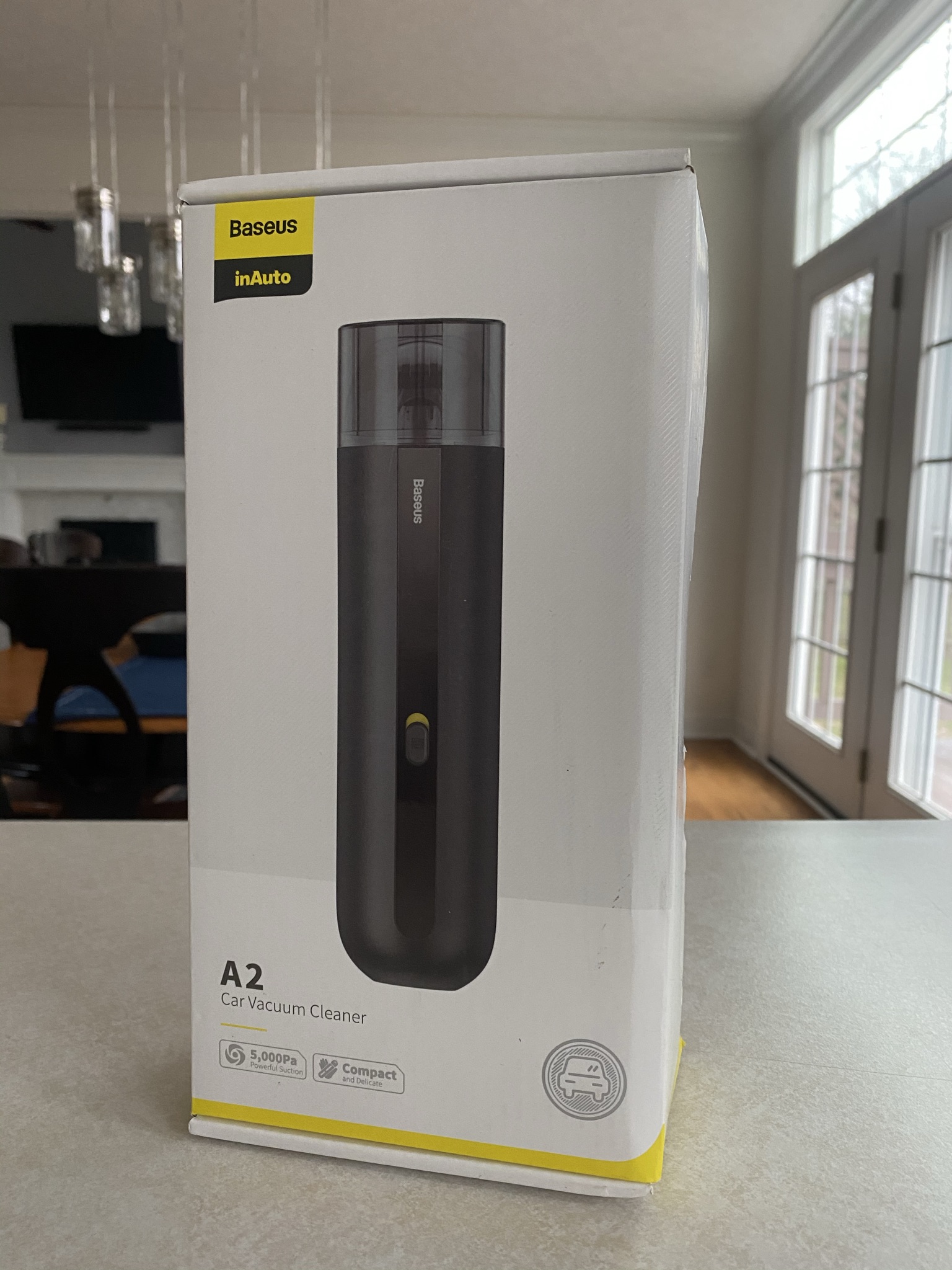