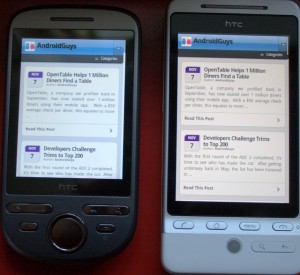 HTC (for now) is the company with the largest selection of Android devices. They were the first one on the scene with the G1 and they have one of the best all-around devices available, the HTC Hero. They’ve recently released an affordable device, the HTC Tattoo and I’d like to compare the two for you.


There are some differences when stacked up to the Hero that might turn some away, but the Tattoo is still a device worth considering. This first list could be all considered as Tattoo PROs.

The Tattoo has also some CONS that have to be taken into account:

As you can see, screen size excluded, there are not that many differences between the Tattoo and Hero. The Tattoo should definitively be in the list if you are in the market for a good, small and affordable Android device.

Using only your finger on the Tattoo screen does not work well if there is not enough pressure. You need to use your nail to be accurate, or even a stylus would be better which is not included with the device. HTC should really have done something to help–they could have included a stylus with a holder in the device or a guitar pick (like Nokia’s 5800). Some would argue that HTC should not have used a resistive screen in the first place, but keep in mind that first it is cheaperÂ and secondly in some cases capacitive screens are not appropriate. You can’t use a capacitive screen with gloves, and also people with hand disabilities would be able to hold a stylus but might have difficulties touching a screen directly with their fingers.

The smaller size will be an issue mainly because lots of applications are not visible in the Market, though that problem should resolve itself once more developers have adapted their apps. See the photos below for the same screens on the Tattoo and Hero. As an example, on a web page in landscape mode you will only be missing a couple of lines. 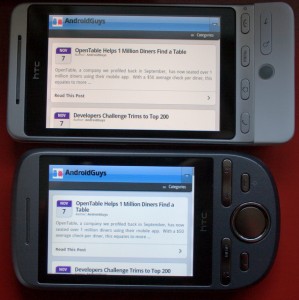 To conclude, the screen will obviously be a key point in a purchase decision, but the Tattoo should not be excluded simply because of its small resistive touchscreen. As I said before, this is a good, small and affordable device… it is an Android device so it can’t be bad! 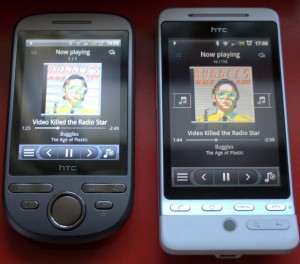