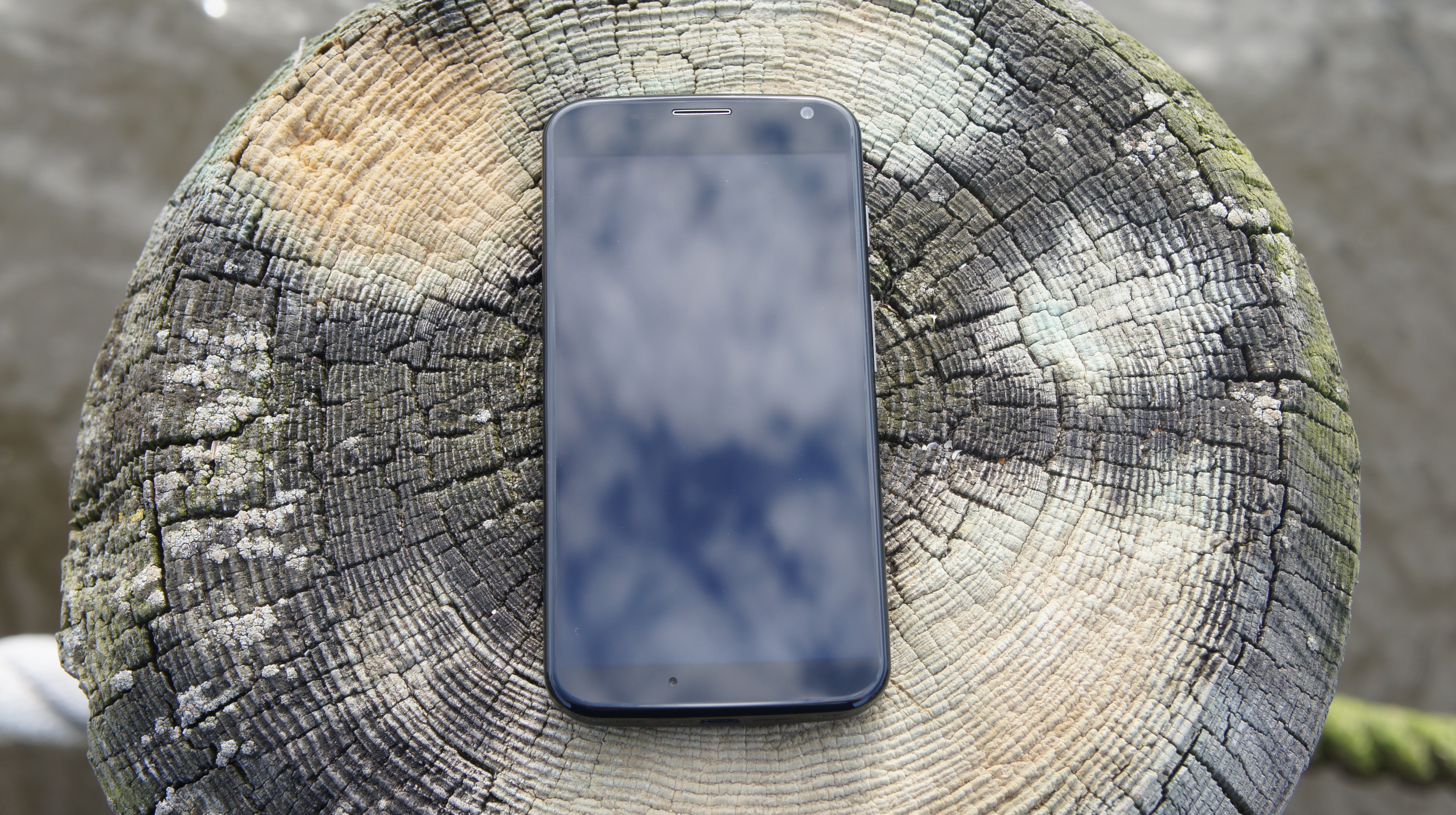 As phones progress, it seems all device manufacturers seem to care about are specs; Processors, RAM, ROM, all words somewhat foreign to the average consumer. But Motorola has a different way of approaching the market, in a world of specs, Motorola is aiming to wow users with features and accessibility over raw power and performance. They have done so with their newest flagship, the Moto X.

Wrapped in a composite PTE material, the Moto X feels great in the hand. The curves along the back help to alleviate the need for two handed operation, allowing you to hold the phone securely in one hand. The soft touch coating provides enough grip so the phone does not slip out of your hand, all while making for a more premium, leather feel.

It’s clear that Motorola took time to design the phone so it would fit perfectly in your hand. Instead of building a phone around a screen, Motorola said that build the device, then choose the best panel to fit within. The glass on the front kisses the outer bezel of the X which creates a smooth canvas for swiping gestures. There is also a small cavity on the back of the X which makes for a unique design trait. When holding the Moto X, I could not help but keep my index finger rested in this dimple. 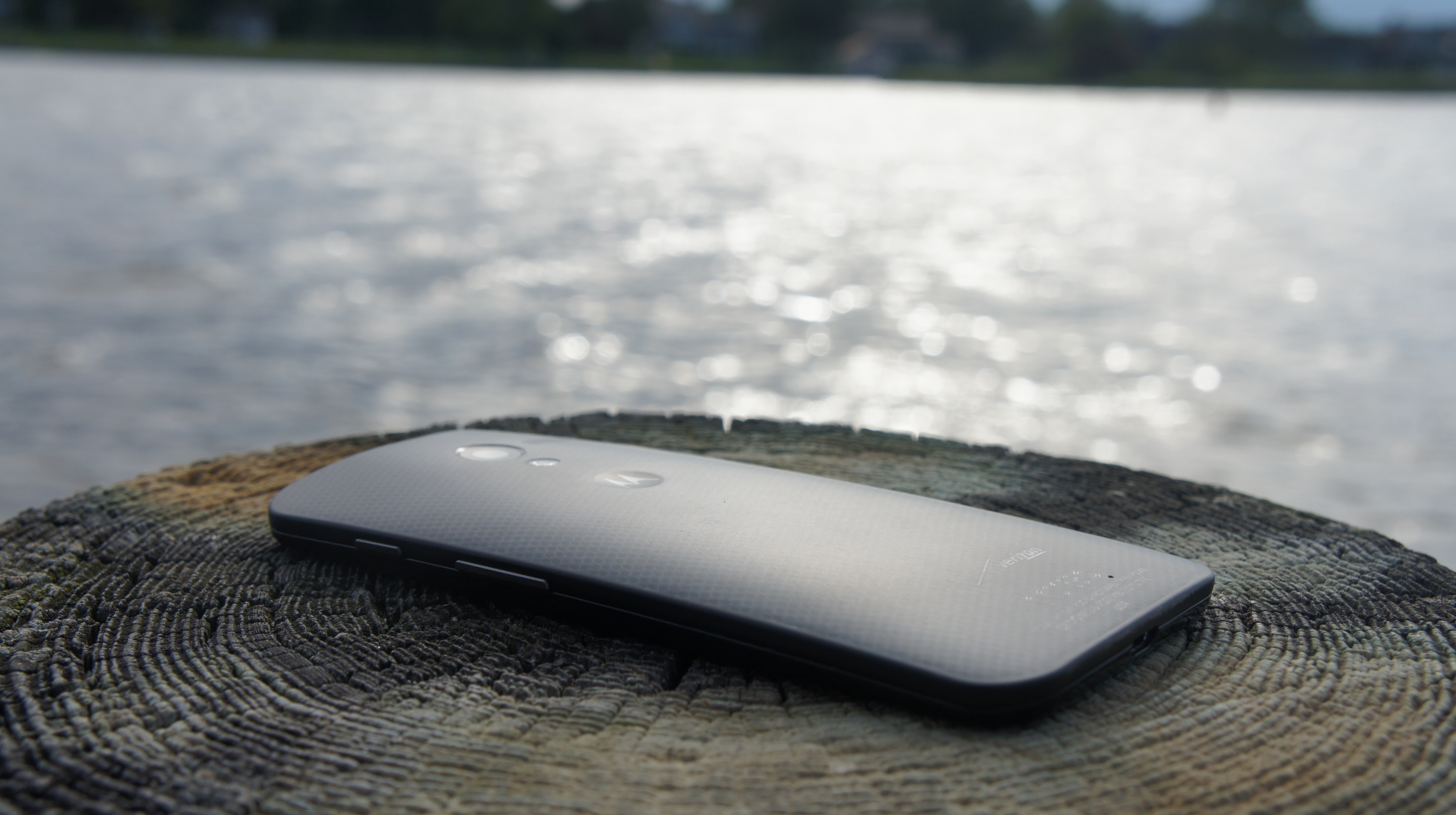 Similar to the HTC One, the Moto X has a curved back panel with no removable battery or expandable memory. Motorola has said to have formed the battery to fill the space where the back of the phone arches over. With that in mind, I am not sure why they only managed to fit a 2200 mAh battery in this phone.

I had the Verizon variant of the Moto X, which (in theory) should not contribute to better/worse battery life. Using the phone rather moderately, I was able to scrape together just under 12 hours of usage. Add in some long calls, videos, and games, I was easily able to bring that 12 hour battery down to 8 hours. Don’t get me wrong, 8 hours of battery under hardcore use  is great, but a dead phone is not. Though as a daily driver, I was able to get use to the battery life on the X without the need to carry around an extra charger.

As I said before, Motorola is taking a new approach with this phone: Instead of amazing hardware and meh software, they are combining great hardware with great software. That great software being a near stock version of Android 4.2.2. I say near stock for a good, well, great reason. The software that Googarola, I mean, Motorola has produced is near perfect in my eyes.

I am a huge fan of stock Android and this phone certainly doesn’t fall short of any stock expectations. Motorola has really just added three key components to this blend of Android; Touchless Control, Active Display, and Quick Capture Camera. 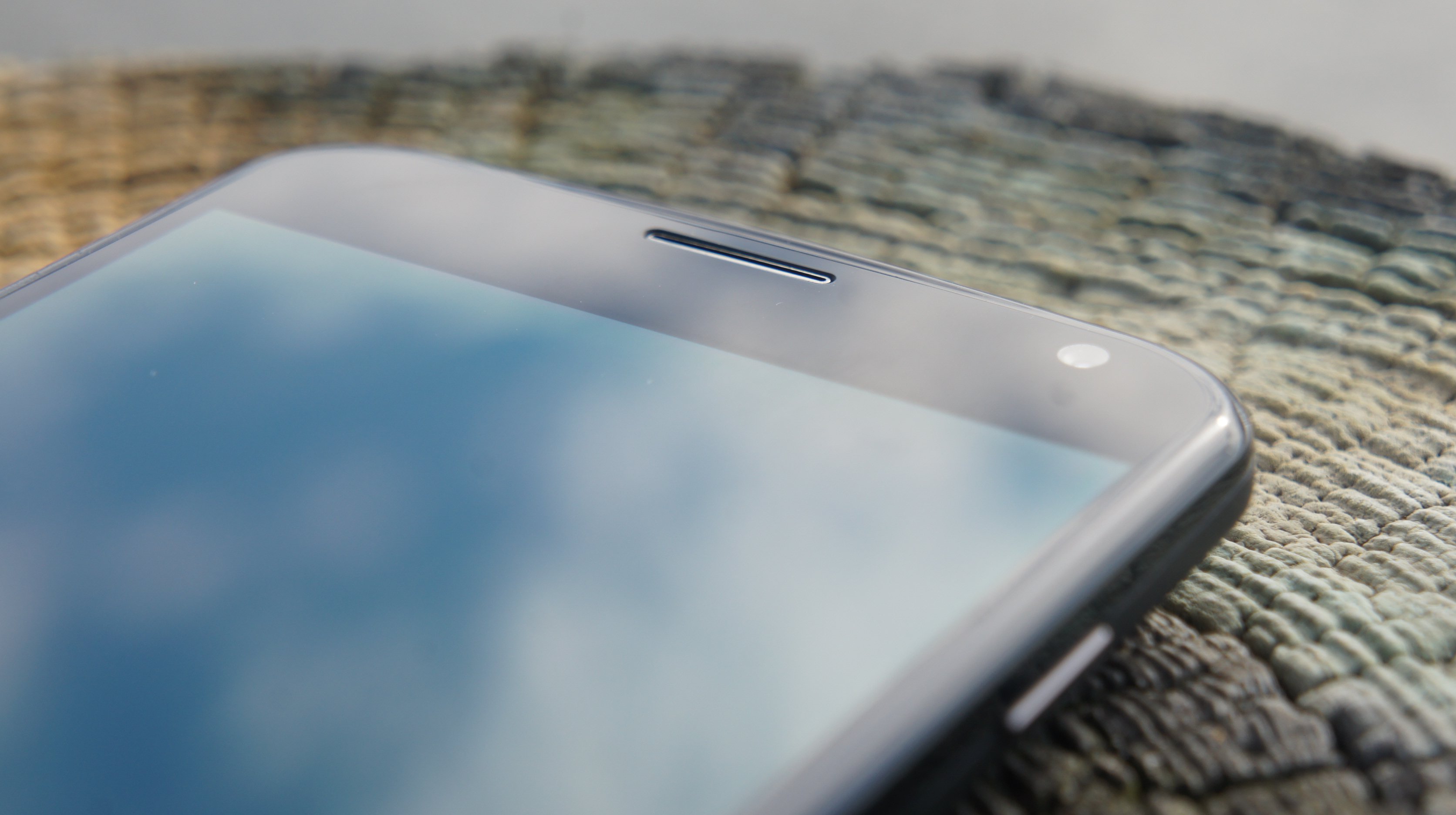 It probably doesn’t take a rocket scientist to figure out what Touchless Control is; it allows you to use the voice command, “Okay, Google Now” to trigger Google Now on the phone. Not sold yet? Let me tell you more. No matter what state the phone is in, as long as you have battery and a cell signal, say the words “Okay, Google Now” and your Moto X will respond to you. This was especially great while in the car – my typical phrase sounded something like, “Okay, Google Now, navigate home”. Whether the phone was in my pocket or in a cup holder, the X sprang to life and began navigating back to my house.

There is a small amount of pre configuring when it comes to Touchless Control – just get yourself in a quiet area, open the Touchless settings and begin the setup process. You will be asked to repeat the key phrase three time, this actually helps the X learn your voice, so there is no confusion when multiple Moto X users are in the same place.

Motorola has finally learned from past fails and pentile is no longer in their vocabulary, yay. The Moto X rocks a generous 4.7” amoled display. Skipping over the usual amoled quirks, this panel actually looks great – colors are still a bit too saturated, but that’s better than muted. And though it only has a 720p (1280 pixels by 720 pixels) resolution, it looks just fine, even next to a Galaxy S4 or HTC One. The lower screen resolution is a result of enhancing the battery life, a trade off I would take anyday.

Because Motorola used an amoled panel, they made perfect use of how the amoled technology works – as opposed to a traditional led screen, when an amoled screen displays the color black, it turns off the pixels in that area; the result is a deep contrast and very black blacks.

Motorola took this technology and made great use of it with their Active Display feature. Whereas most phone have an led indicator to show notifications, the X actually displays the notification icon (as well as time) on the screen. This allows for a very quick, seamless look into your phone without having to even press the power button.

When announcing the phone, Motorola spent a lot of time talking how modern smartphones have all these sensors that are virtually doing nothing. The Moto X takes those sensors and puts them to work in the background, making the X much smarter than it appears. When the phone is in your pocket or purse, the X knows; a bit creepy, but pretty cool if you think about it.

Using these various sensors to detect location and orientation, Active Display know when to illuminate the screen. Flip the X over from front to back and the screen lights up; the same goes for when you pull it out of your pocket or purse. Active Display then gently displays your notification in a slight pulsing pattern on the screen.

When using the Moto X, most people probably will not be able to tell the difference from any stock Android device. That is because most of the unique features are running in the background of the phone. One of those being the Quick Capture Camera, a redesigned camera application that makes for better one-handed use.

Besides tapping the camera icon to open the app, you can twist your hand in a screwdriver motion to open the camera. When announcing this feature, it looked beyond gimmicky, but in everyday use, it’s actually useful. The same as with Touchless Control, no matter what state the phone is in, just twist it like a screwdriver and the camera lunches. 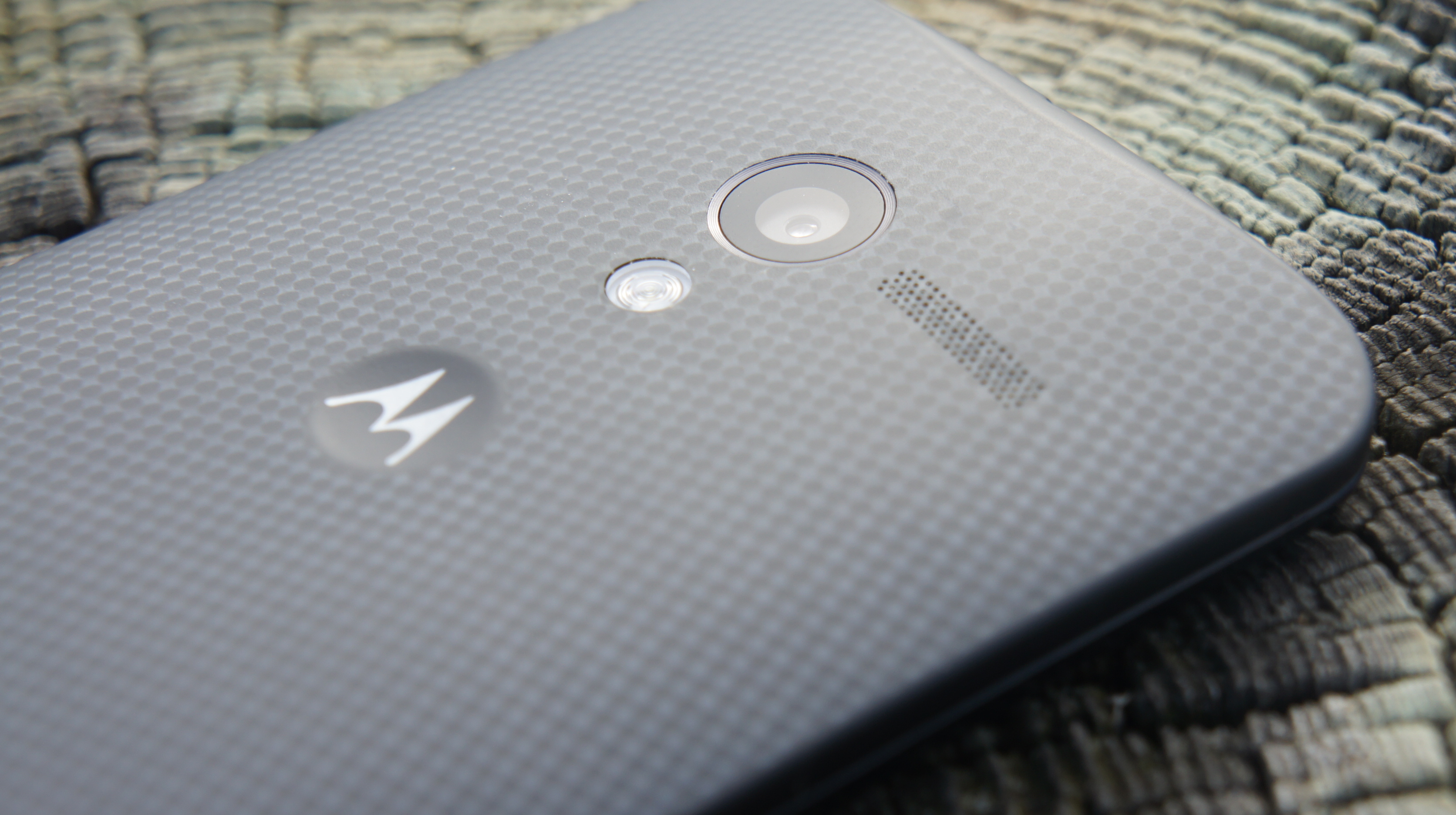 Once you are in the camera, they have simplified everything; just tap to take a photo, swipe left for your galley, and drag your finger up and down for zoom. However, there are very few settings in the camera app. The basics are there, like, flash and tap to focus, but it seems they are missing some important settings. Granted, Motorola is trying to attract the mass market with phone, but there is no reason why a setting like white balance, couldn’t be placed in one of the menus.

As for camera quality, it was hit or miss, I was always able to take a somewhat decent photo, but it was very amazing. Motorola claims to be using a new, Clear pixel technology, which uses an RGBC sensor to bring in 75% more light. Pair that with 10 megapixels and it is an interesting combination; i’ll let the sample photos do the talking in this case. 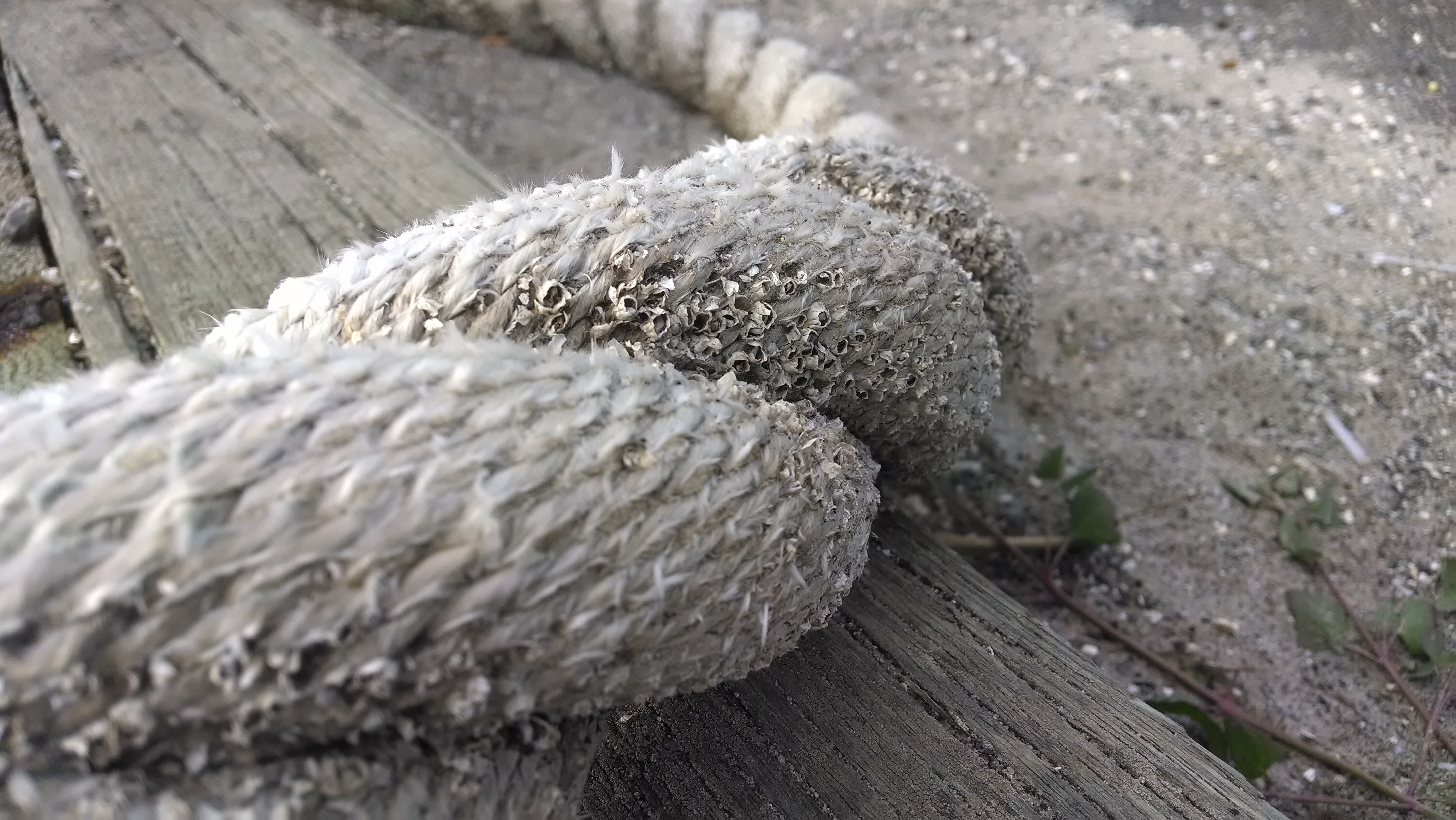 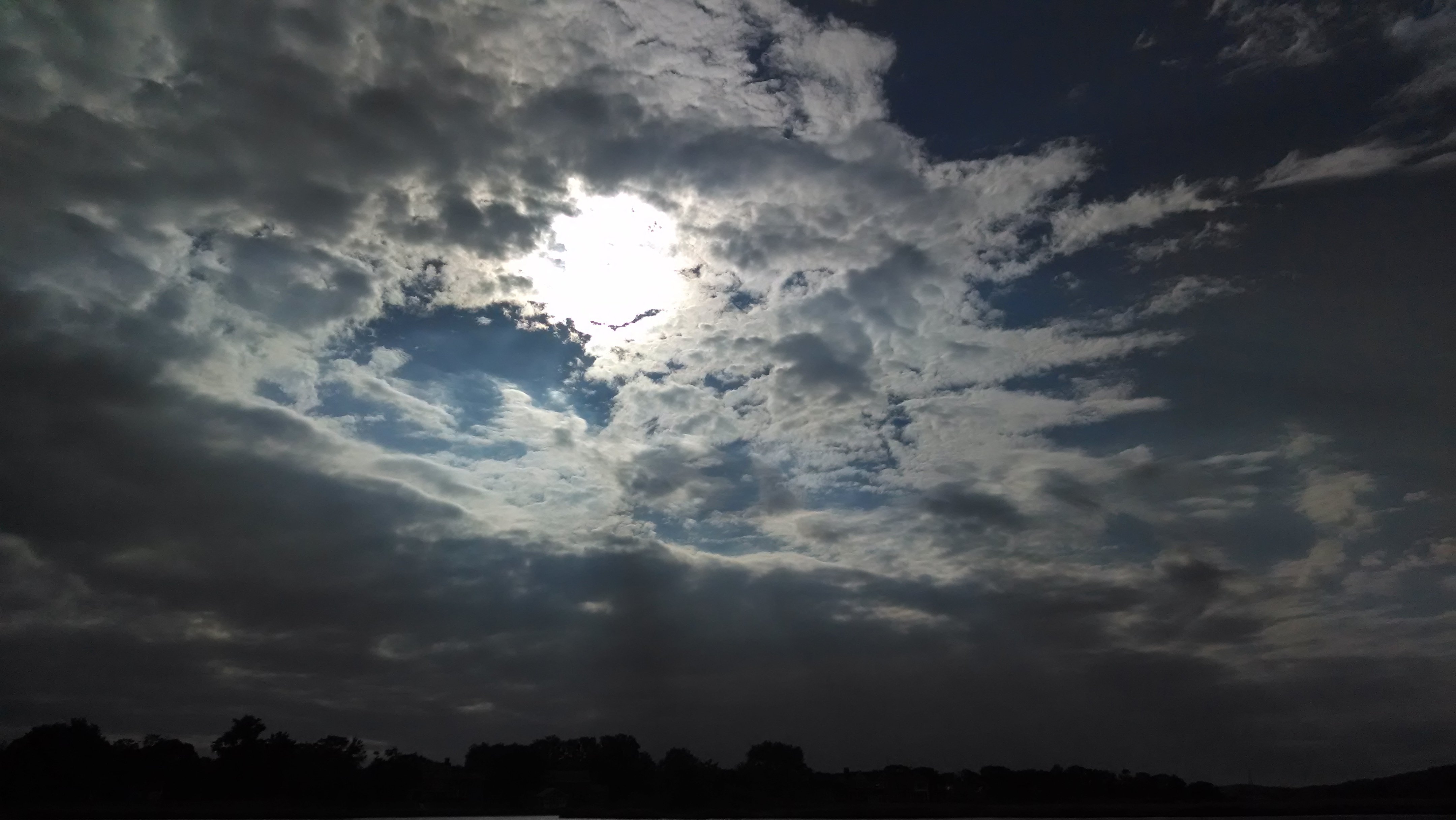 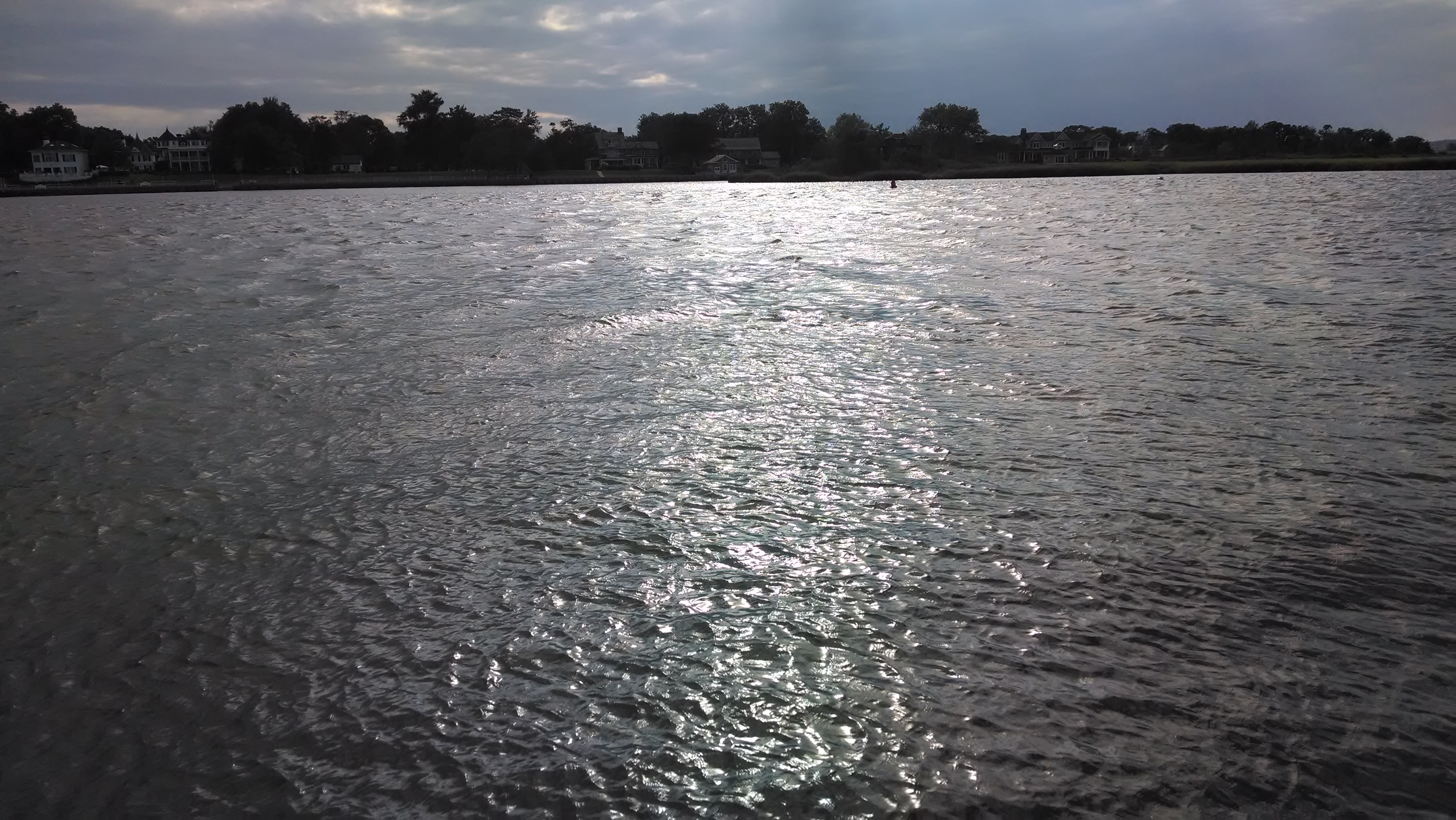 The Moto X I reviewed was all black, kinda boring ehh? Well Motorola thinks so. I am not sure this will be a total selling point for the X, but you can customize the phone just for you. Using their online tool dubbed, Moto Maker, you have the freedom to change the color, boot animation, and a few minor parts of the X. Starting with the front, you can choose from black or white to help accent the other colors. For the back, you have a choice of 18 different colors and 2 wood grains, yes, real wood.

I think the real kicker is the next part, you choose from 7 different colors for the buttons on the phone. I am not sure why that last piece struck me as cool, but seeing the phones in person really had me invested in the custom-phone idea.

The entire process will take 4 days or less, from designing online to arriving at your doorstep. That’s because the phones will be assembled in Ft. Worth, Texas. If the entire Moto Maker process is not for you, phone stores will be stocking the white and black models for same day convenience.

Personally, I would like a black Moto X with a wood back plate and black buttons. Motorola will also be selling redemption cards in store, this way you can begin setting up your phone at your carriers store, and finish everything online. 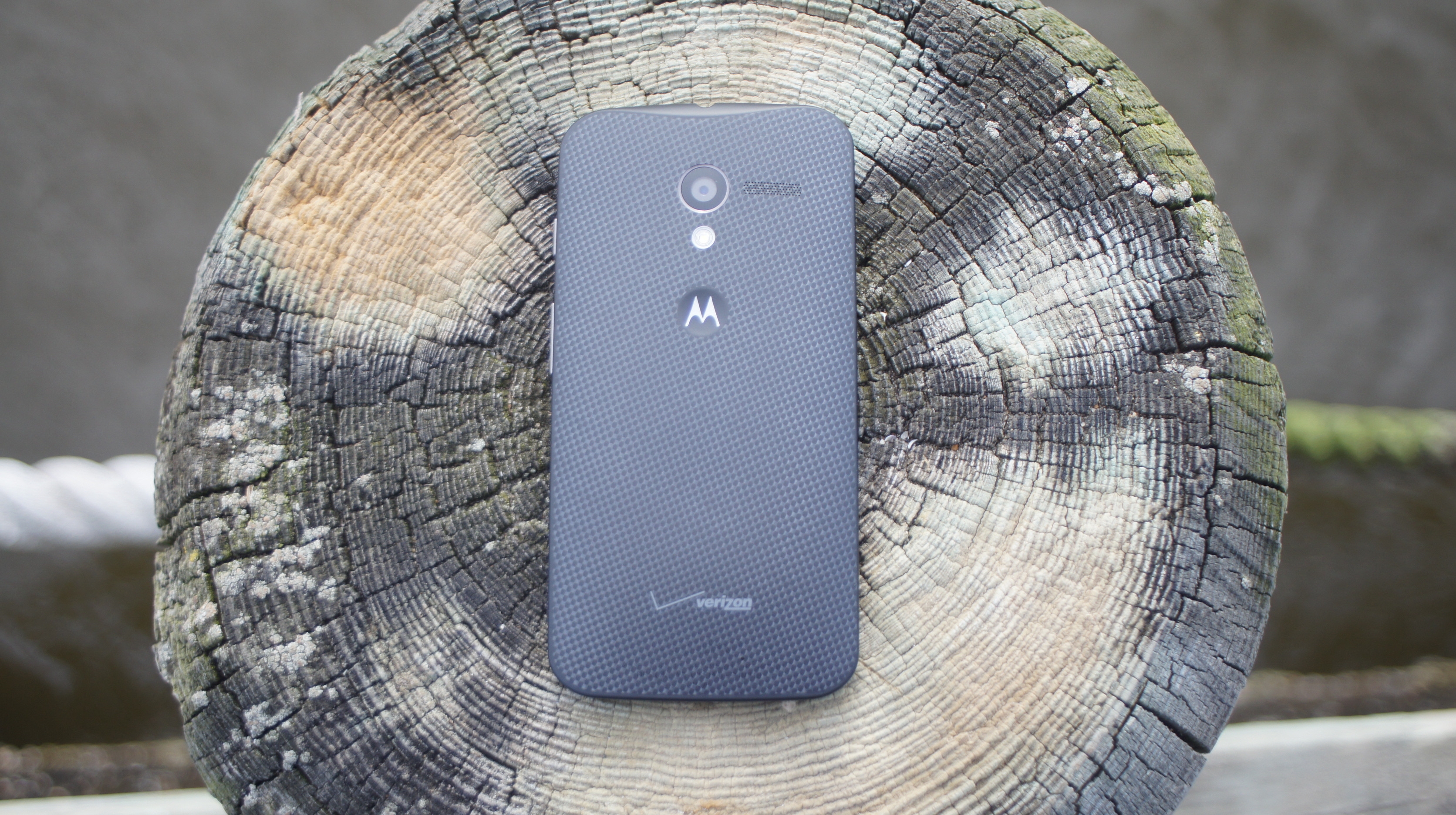 If you have not noticed, I tried to write this entire review without mentioning the specs of this phone. While specs are important, the “mid-range” specs in the X offer a not so mid-range experience. Motorola certainly wowed me with this phone, it’s not that it’s any faster than most phones, it’s about how this phone shows what the future of Android can really be. The Moto X responds to you without you asking it to, it’s a phone that takes away a step or two in the process of making a call or sending a text. The hardware is not astronomically good, but it’s good enough and the software has just enough features without diluting the best parts of Android. I would still like a better camera and definitely a micro sd slot, but without being too picky, the phone is good as is. Since reviewing the Moto X, my Galaxy S4 has found its new home, a drawer. 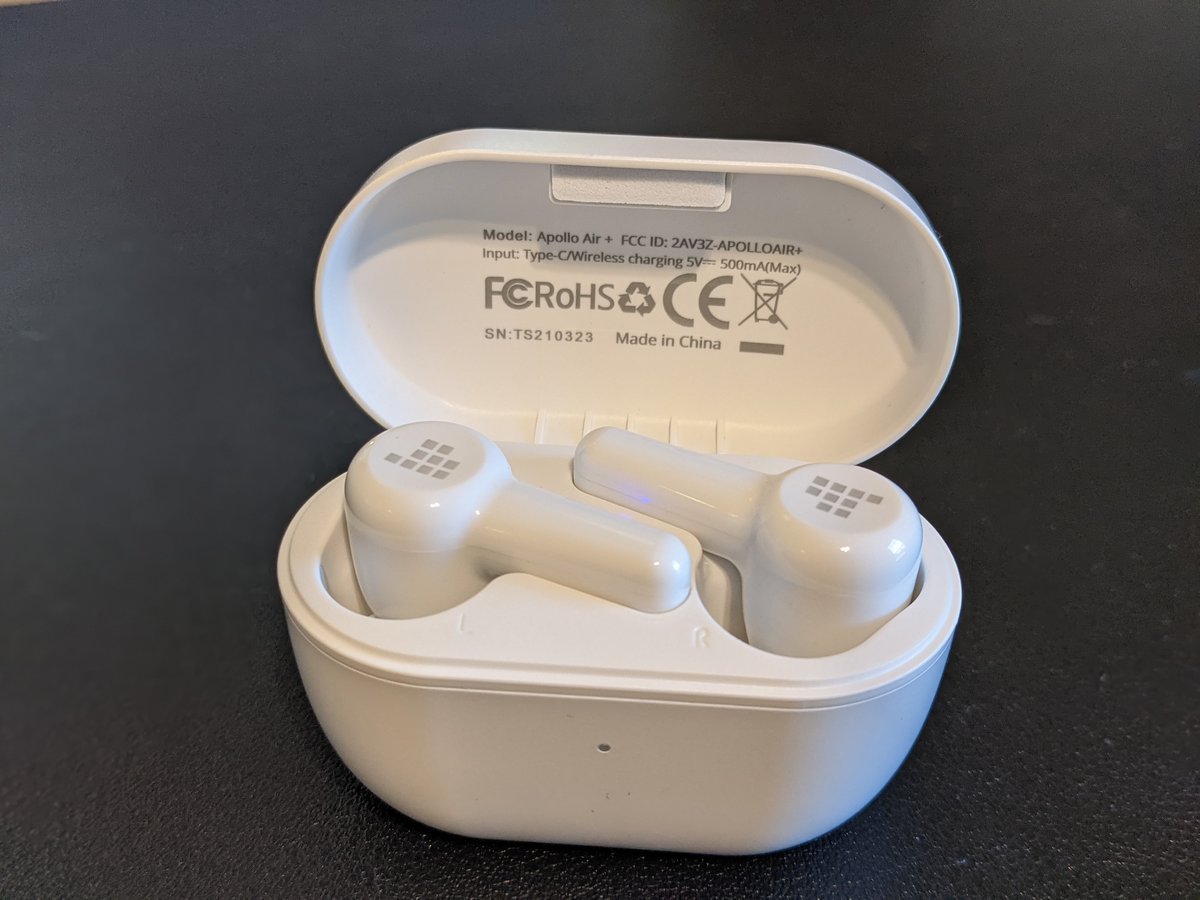