Just this past week, I put my beloved T-Mobile Samsung Galaxy Tab on craigslist in anticipation of getting the first Android 3.0 tablet: the Motorola Xoom courtesy of Verizon Wireless.  As expected, the Tab sold rather quickly and the price offered was right so I naturally saw this as a sign to get the Xoom (yeah right). 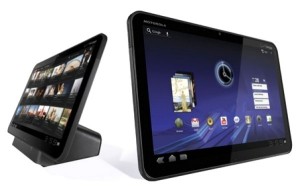 I had been contemplating on splurging for this particular product because it’s not only the first one, I’m use to being an early adopter, but I didn’t want another device with a data plan contract.  But I went against my better judgment and became the proud papa of a Darth Vader-ish looking slab on Monday afternoon.

I should’ve been tipped off by the final bill of $666.89 including my first month of prorated data AND the obligatory $35 activation fee.  Even before I left the store, my Gmail, Contacts,and  Calendar had all been populated.  Now this is a device for the post-PC age!

First impressions as I walked to the car: the screen is VERY glossy and almost impossible to see outdoors.  Even worse than an iPad, in my opinion.  The Xoom may be the same weight as the 1st-gen iPad but it certainly feels heavier.  Not sure if this is because it’s more of a landscape device versus a default portrait, but it is.  I like the “stateless” hardware button on the front as Honeycomb gives you software buttons for the Back, Home, Multi-task trifecta.  And I may be one of the only people who likes the power/standby button on the back as it’s not accidentally bumped, mashed, etc.

Okay, now fast forward two whole days and it is now boxed up and will be back in Verizon‘s retail inventory by this afternoon.  And I will gladly pay the 10% restocking fee counting myself fortunate.  I was surprised that even without Flash and the LTE upgrade, the Galaxy Tab actually felt like a more polished device then the Xoom ever will.  The Tab worked out of the box without anything needing to be added, sure it has an ancient OS, Android 2.2, but it was production ready from the get-go and it was familiar to us phone users.  Because let’s face it, it really is just a big phone without a proper phone app (North American device).

I downloaded my prerequisite apps to the Xoom that I use for work: AndChat, Skype, populated the Email client (that has no push abilities for IMAP.  Yes K9 is an option but I was surprised nonetheless #justsayin), Google Voice is not available, and Seesmic for Twitter.  For what it’s worth, I tried to install my paid for Gameloft games: Ultimate Spiderman and Modern Combat:Sandstorm.  But they only generated a “copy violation” warning when I tried to run them.  Bump.  The only apps previously mentioned that are formatted for the Xoom are AndChat and the native Email client.  I really like the Android 3.0 browser but after crashing about 50% of the time I tried Dolphin HD.  It stutters and chugs worse than a 1977 Vega and is definitely not written for Honeycomb.  I copied Toy Story 3 over and it looked just okay.  I was hoping for a more HD viewing experience but it looked better on the Tab possibly due to the smaller 7-inch screen thereby creating pixel density.  Trying my best to use it as an in-between device I kept finding myself putting it down and leaving it for a proper laptop.  Not good for an almost $700 luxury piece of kit.

In closing, the Xoom is a a small step for tablets but a giant leap for Android-kind.  But in these economic times with gasoline coming close to $4/gallon, I cannot personally justify keeping such a gadget of extravagance and then paying Mother Verizon an extra $20/month for the privilege of 1mbs down on their aging 3G network.  I will be paying close attention to a market ready Android 3.o tablet but this one ain’t it.