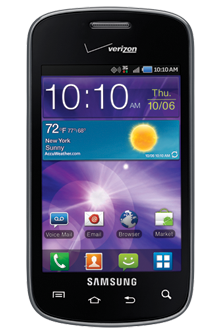 Last month, Verizon unveiled the Samsung Illusion as an option for the money conscious smartphone consumer. This phone may be lacking in specs, but for a $79.99 price tag, Samsung didn’t leave much room for complaining.

One thing I failed to mention in my video review below is how annoyed I was with the placement of the power button. Samsung is known for putting the power button on the side of the phone. While this is a very smart choice for phones that have 4″ displays and above, on the Illusion, it actually made pressing it more annoying than it should. I feel like they’d have been better off putting it on the top of this particular phone.

I will also note that unlike some of the other sites I’ve seen that have reviewed this phone, I did not have any issues with the sound quality. Call me hard of hearing, but the quality was exactly what I’d expect from a $80 phone. Even the speakerphone performed decently. However, if I was in a noisier environment, it might not be loud enough.

All in all, the phone is a solid choice for those who want a simple, no-frills Android phone. I wouldn’t recommend it to power users or enthusiasts, but then again, Verizon and Samsung didn’t have those consumers in mind anyway.

These are the pictures I took during the video review. They were taken indoors, so keep that in mind. Outdoor shots are likely to be much crisper. For a 3 MP camera without a flash, you get decent, quick pics. Just don’t expect to be  starting your family photo album with this thing.