Before I begin my gushing discourse of the love I have for Sonos and it’s newly minted Android controller app, I have to diclose the fact that Sonos sent me a review unit to use, of which that I do not have to return to them.  So simply put, I have to disclose that they gave me free stuff.  That being said, they did not need to buy my love whatsoever, because using Sonos for me is like sitting a fat man down to a 15 course meal, with some magic thrown on top that makes it feel like he never gets full.

I could go on and on with the adjectives I could use about Sonos, however you probably want to hear specifics about the devices they sell and the app to control them, so let’s get down to business.

The review kit from Sonos was a generous one.  Inside of the very large box were three devices, a Sonos Zone Bridge and two S5 wireless speaker systems, all of which work in conjunction to bring audio content to any room in my home that has reach to my wireless network. As I said before, a generous kit to be sure that allows me to experience all the functionalities that Sonos has to offer with their units.

When taking the units out of the box, the first thing I noticed was the heft and weight of the S5 devices.  They are well built, stylish and feel like they are of a quality build.  The Zone Bridge itself is low profile, and hides away nicely.

Setup was simple, and took about 10 minutes total.  (It would have taken longer if I had not already had my music library shared across my home for use with Boxee and other devices).  It consisted of installing the Sonos desktop software that comes with the units, which of course has server functionality to send content to the different devices that are connected.  From there, I hooked up the Sonos Zone Bridge.  If you are confused, the Zone Bridge is simply an interface unit for your network in case your wireless router is someplace where you do not want to wire a zone player up.  In my case, my router is in my basement, in my network closet, so the Zone Bridge was appropriate.  (basically, if your router is in a place that is accessible, and you have a small home or apartment, you can simply use one zone player instead of the bridge, which is an actual speaker unit.)

I plugged in and powered up the Zone Bridge, hit a button and it was instantly talking to my HTPC, where I had installed the server software.

From there I plugged in and powered up the two S5 units, and installed the Android Sonos controller app, and was operational very quickly. 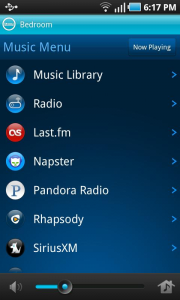 If you have ever owned a Swiss Army knife, you will understand the Sonos audio experience fully.  Simply put, these things literally do everything you would want them to audio wise.  First and foremost, you use them to play your networked mp3 files, which it does well.  Using a simple browser that allows you to crawl through your networked music folders, you can isolate single tracks, albums, artists and playlists.  You can also simply add all the tracks you have available, and set the to shuffle play, giving you an endless soundtrack to your life.

You may be saying to yourself, “big deal, I can do that with my Android device alone, why do I need Sonos for that”.  In the words of a famous TV personality, “But wait, there’s more!”

In addition to playing your networked audio files, Sonos allows you to play a plethora of different audio sources.  You can tie your user accounts from Pandora, Napster, Rhapsody, Sirius XM and Last.FM in as well, allowing you to access all of the content through those services with a touch of a button.  Still not enough for you?  How about the addition of the fact that Sonos will also play your local terrestrial radio stations, automagically sensing your location in the country by your ISP address?  It’s got it.  Sonos even found my small town in the middle of nowhere Missouri, and had all the local radio stations available.  (Sonos taps into each stations live stream broadcast)

Don’t want to listen to your local stations, but want to get one in say, New York?  No problem, Sonos allows you to change the city you are listening to and browse radio stations across the world.

Let’s move on to the functionalities built in to the S5 devices.  These speakers can work by themselves in a room, or in conjunction with each other.  By themselves, they are a full stereo system in the same vein as the Bose Wave device that started the small speaker revolution.  On the back side, they have a couple of inputs.  First there is an ethernet pass through, so you can hook up your speaker directly to your wired network.  There is a line in jack that works with a provided patch cable to run from the headphone jack of any device that has one, so you can play media directly to the S5.  Last nut not least is a headphone jack in case you want to listen privately to your media.  On top of the S5 is a volume rocker, as well as a mute button and a notification light to let you know when you are connected to your network.  I love the simplicity of the Sonos devices, everything is very intuitive and easy to use.

As far as sound goes, these units sounds amazing for their size.  The speakers sound crisp and clear, with very little distortion in the highs and lows.  Indeed, on some tracks with a heavy bass line, it shook the counter or shelf the unit was on pretty nicely.  Very satisfying indeed.  On their own, each S5 is capable of playing a full, rich stereo sound field, capable of filling a good size room with sound.  Indeed we could not crank the unit all the way up because it become too loud for comfortable listening.  We took the unit outside in our yard during a bonfire, and one unit alone filled our three acres of land nicely.

Where the S5 units really shine is in the advanced functionality that is built into them.  When you have more than one speaker hooked into your network, you can listen to different music sources on each one.  Meaning that if you have one in your kitchen where the kids are doing homework, and one in your office where you write from Android Guys, the kids can listen to Radio Disney will the Tron: Legacy soundtrack is playing in the office. Each unit has complete and total independence from each other in the network environment.  You can control the volume of each one from the Android controller app, what they are playing, how they are playing it, the whole nine.  Each S5 is an entertainment system to itself.

Now if you really wanted to have some power say outside, or in a large group of people, you can actually link the two S5 units together as a left-right system to buddy up their power.  Again, during our bonfire, we did this and were blown away by the sheer power in the little units.  At a relatively low volume they filled our land during our party.

As a technophile, I love to see tech and software that has been thought out, refined and made simple and easy to use, thereby unleashing the power that is hidden within them.  Sonos has done exactly that with the Android Controller App, creating a piece of software that is simple, powerful and free.

Simply put, instead of having to buy one of Sonos’ hardware based controller units, you can use your Android device over the same WiFi network to interface with however many Sonos devices you have on your network.  In my case, I could isolate each speaker in different rooms, change what they were playing, change the volume of the speakers right on my Android device.  The app is well laid out, making it easy to use and navigate.  Another nice touch was the fact that if I had the album artwork of the network track I was playing, the app would display it, along with info on the album downloaded from the internet.

The app is clean, and well done.  It is not a slapped together addon for the Sonos system to sell units, but a real effort to help people who already own the units to extend their functionality, and to allow new adopters to get in for the lowest price possible.

I think it is pretty obvious that crazy in love with the Sonos units and the app.  The only downside I can see with the units themselves is the price.  The S5 unit runs $399 on the Sonos site, where the Zone Bridge runs about $99.  Do I think the S5 is worth four bills?  Yes.  I really do.  The sound and quality you get, with the ability to add on to your setup in the future makes it a good buy.  The market for these units are people who appreciate functionality and quality.  Sonos offers this, hands down.

If you have some money burning a hole in your pocket, or a fat tax return, I think you can feel safe buying these units.  Two of my buddies who do not live near me bought the same setup that I have after seeing it over video chat.  They were blown away by what they could do.  After receiving the units, they were exceptionally impressed, and recommend them highly.

Tonight on AGTN, we will be talking with Jodi from Sonos, make sure to join us to hear all about the company and the units, you can also use our download block below to download the Sonos Controller from the Android Market.

Run, do not walk, to get these units if you have the coin.  You will not be sorry. 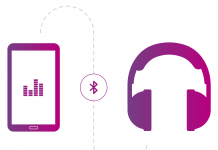