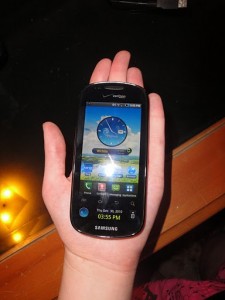 A sexy, sleek new Android device from Verizon Wireless brings a little twist to makes it stand out on its own.  While it sports the Galaxy S logo many are familiar with, the Continuum separates itself with a few distinctions.

The smaller 3.4″ Super AMOLED screen really is a beauty, just like all the other Galaxy S devices.  The 1.8″ ticker display is the first thing to stand out & separate the Continuum from the rest of the pack.  Aside from a few dislikes which I’ll dive into towards the end, the albeit gimmicky device should land in the hands of many Verizon Wireless customers.  Best suited for those with smaller hands that find a typical 4.3″ display to be too large, but don’t want to sacrifice the speed of the ultra fast Hummingbird CPU.

The ticker display is the most controversial topic surrounding this phone. Its a 1.8″ (480 x 96) screen at the bottom of the main display.  Geared towards the social networking part of life, there are Facebook, Twitter, SMS & other notifications inside the ticker.  While quite innovative, it has a few things holding it back.

First of all, why on earth is it on the front of the device?  I believe its better suited on the back towards the top or bottom, so while laying face down, the information inside the ticker is accessible.  Why rob precious real estate from the front by adding a second display when the main screen could be larger?  Relocate the ticker to the back, open the source so developers can make the most of it (read: better than the manufacturer had in mind) & we might have a winning combination.  Until then, I’m going to call it a gimmick.

Battery life is fairly impressive with this device.  The 1500mAh battery which is pretty common in many Android devices, might get a little extra help from the smaller display size of the Continuum.  The USB charging port is on the side of the device which is a pet peeve of mine.  Not being able to mount the device in my universal windshield mount is a considerable loss.  GPS navigation can kill the battery & without the ability to charge the device you might end up at your destination with a dead cell phone. 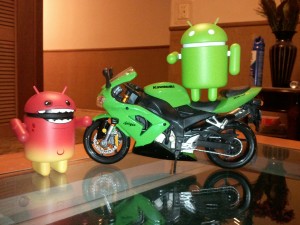 The photo above shows the Continuum can snap a decent photo.  The LED Flash is available for dark lighting conditions as well.  It sports a 5mp camera with auto focus.  Built in, is the ability for 720p video recording too.  A quick dive into the specs of the Continuum & its easy to be impressed.

All-in-all the Continuum has many items on the “Want List” for any Android device.  Fast CPU, expandable memory & an awesome display.  However i do have a few gripes which might be considered deal breakers for some, as well they should be.  I’ve already had a mini-rant regarding the ticker display & feel it would have worked better if Samsung considered how things were done in the day of the flip phone.  Remember when flip phones introduced the small display on outside of the clam shell indicating time, missed calls etc?  Well that didn’t steal anything from the main display & provided information “at a glance” which should be the goal of the ticker without the real estate sacrifice.  The next gripe is a rather large one and it has more to do with the entire line of Galaxy S devices that are STILL running Android 2.1 (eclair).  Seriously a device with a Hummingbird CPU released in the 4th quarter of 2010 doesn’t have at least Android 2.2(froyo)? I mean, SERIOUSLY?  The TouchWiz interface is easily replaced for those who prefer ADW or LauncherPro as alternatives.  Oh but there’s something about Bing on a Google Android device just screams out “mod me, mod me – save me, save me!”

A little side note, it appears the device is rootable using the z4Root method courtesy of AliWaqas.  There aren’t any customROMs & dev support seems to be absent despite having its own forum on XDA.  In other words, this device may not be for the l337 h4x0r5 out there, but if it gets updated to Android 2.2(froyo) I could see it fitting the intermediate user.  As it sits right now, its best for the younger consumer that enjoys gimmicky little things like the Ticker Display. 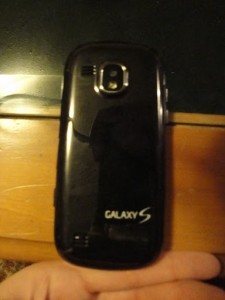