[dropcaps]When those of us who aspire for the latest and greatest see a budget phone, it’s only natural to shrug our shoulders and move on to something more interesting.  With that said, I don’t think the latest and greatest in smartphones has been that inspiring lately.  I’ll actually argue that there’s more action going on in the budget space right now.  As the gain of top-level components are slowing, entry-level components have way more advancement to be had.  And as that gap narrows, you get much more value with the inferior smartphone.[/dropcaps]

And this is exactly the perspective that I took with the entry-level ZTE Overture 2.  ZTE is no stranger to value in the smartphone space, and the Overture 2 is no exception with a price tag of $50, on Cricket Wireless.  What made this review particularly interesting to me is that fact that it runs on Android 5.1 Lollipop and sports a Snapdragon quad-core processor.  Time to see how narrow that gap really is! When you consider an entry-level smartphone, it’s not reasonable to expect a design that impresses, but rather, one that works.  It will be basic, but sturdy.  And if it excels, the user won’t be thinking about the cheap price tag.  I’m happy to report that this precisely describes the Overture 2. Yes, the design is reminiscent of older plastic Android handsets, back when removable back covers were commonplace.  However, not once did I loathe holding the Overture 2.  It feels solid, doesn’t flex or creak, and the material doesn’t indicate that it won’t last.

I appreciate that the plastic back cover has a textured weave-like pattern.  It helps considerably with the grip.  There’s a small notch on one of the corners for easy removal of the back cover.  The cover easily snaps back into place. 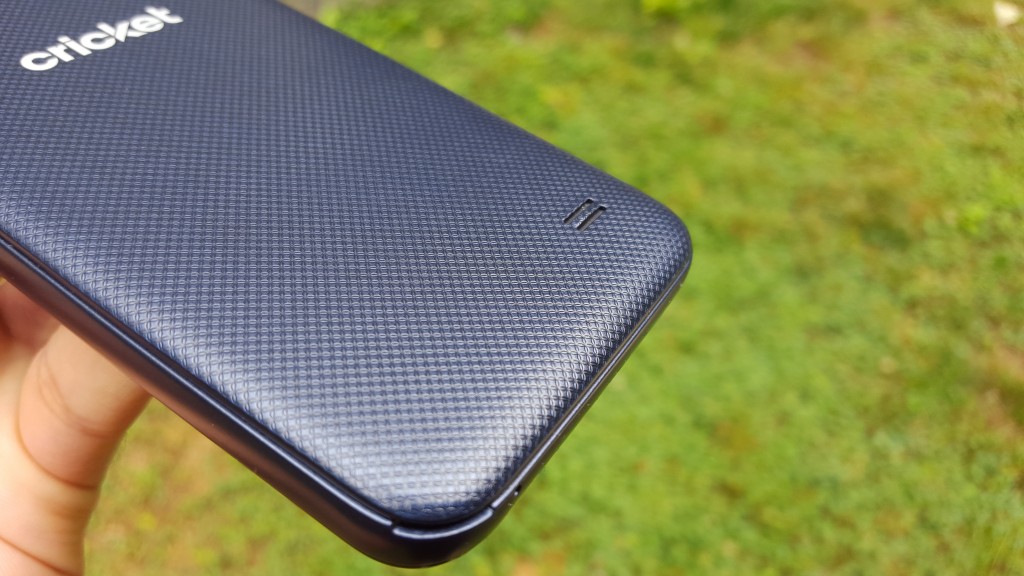 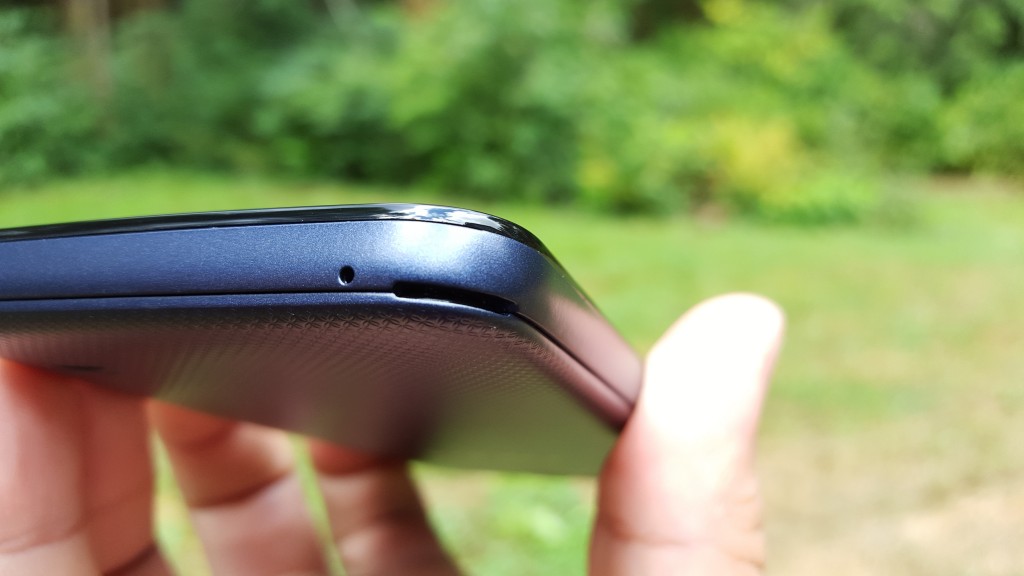 It’s a bummer that while the back cover is removable, the battery isn’t.  I always dislike when manufacturers do this, it’s almost like a tease.  All is not lost as there is a microSD card slot under the cover.  The SIM card slot also resides here. Although the Overture 2 runs on the latest Android OS, you won’t find the latest method for navigation buttons.  On the front you have capacitive soft keys on the bottom (in Lollipop style, at least), a ZTE logo smushed between the display and earpiece, and a front-facing camera.  My only gripe here would be the screen-to-body ratio of the phone.  At 62.9%, I feel like a 4.5″ device should be smaller than this. 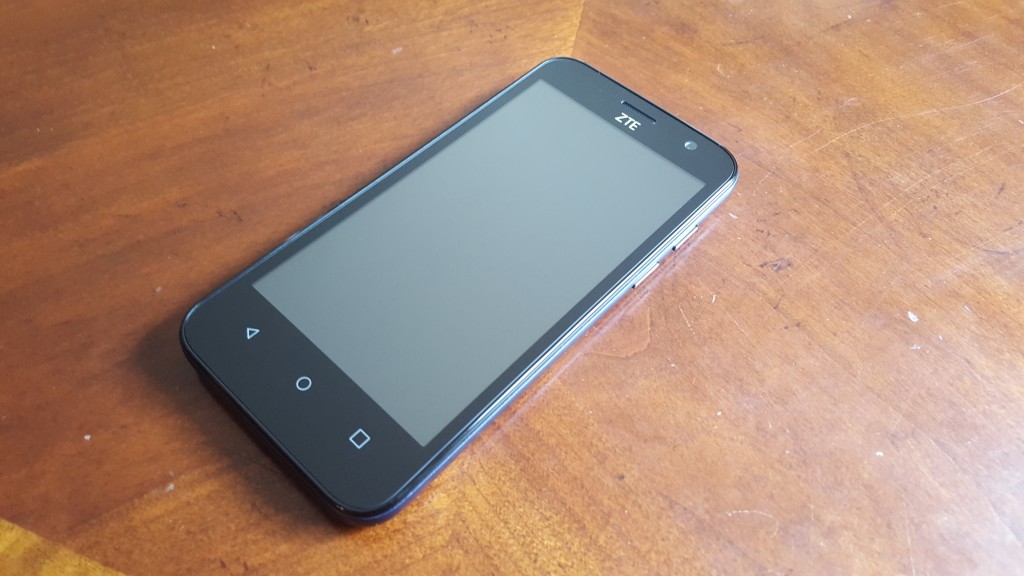 Around the perimeter of the phone, we have a microUSB charging port on the left, separated volume buttons on the right, power button on the top right, and headphone jack on the top left.  There is only a microphone on the bottom of the phone. 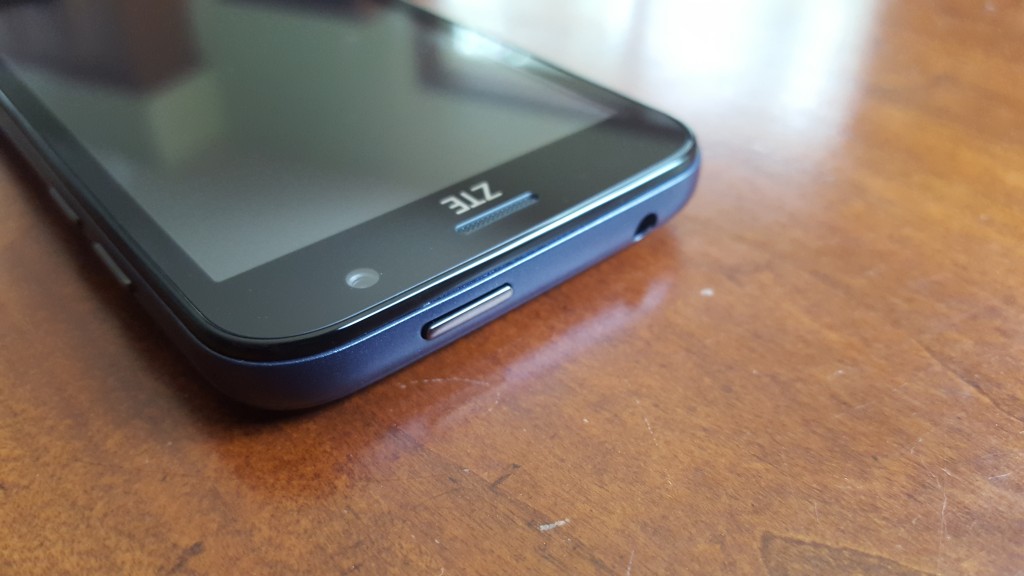 The usability of the power and volume buttons were done well.  They’re clicky, instead of mushy.  Neither too hard nor too soft to press.

I was excited to put the Overture 2’s hardware through its paces.  Although this a budget phone, it’s running the latest version of Android (Lollipop 5.1).  Powering it is the current entry-level quad-core processor from Qualcomm, the Snapdragon 410 (1.2 GHz).  In other words, I was curious to test out how much performance I would lose in comparison to my top-end daily driver.

Confirming my suspicions, the difference wasn’t stark.  The Overture 2 is sufficiently snappy with basic operations (sifting through panels and apps, opening/closing applications, web surfing).  There are some executions that do have a second or two delay that shouldn’t, but certainly nothing to cry about.  This could be attributed to the low 1GB of RAM.

And while we’re on the topic of low memory, something I dislike that’s common on budget smartphone is low internal storage capacity.  Unfortunately, the Overture 2 suffers the same fate, with only 8GB of storage space.  After installing a handful of standard apps (Facebook, FlipBoard, Pandora, etc.) and taking a few pictures, I was down to 1.38GB available. 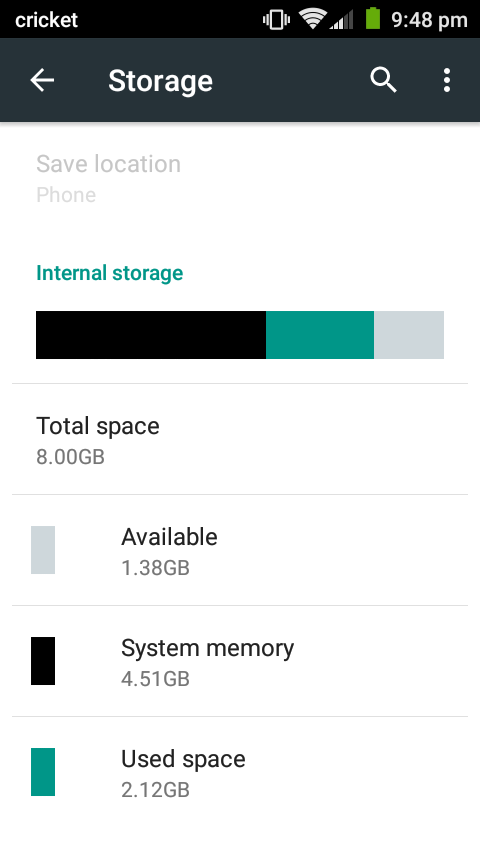 Bear in mind that the OS takes up a chunk of the overall capacity.  Fortunately, Overture 2 is helped along by a microSD slot (expandable up to 32GB).

I loaded up a game (Leo’s Fortune) on the Overture 2, to test out the on-board Adreno 306 graphics chip.  I wanted to try either Modern Combat or Asphalt to stress test the system, but unfortunately with that little storage space, you won’t be able to install big games on this device.  But for what it’s worth, Leo’s Fortune played smoothly and without a hitch.

The largest red mark I would have to give the Overture 2 is on the display.  Its Achilles heel is without a doubt the display quality.  Let’s cover the specs first.

We have a 4.5″ LCD screen (protected by Dragontrail glass), with a FWVGA resolution (854 x 480 pixels).  While the resolution is older than yesteryear, it is not unexpected for an entry-level smartphone.  The same ideal extends to the display quality, but here I’m particularly left feeling that ZTE should have done better.

The display has this strange phenomenon that occurs at viewing angles.  I’ve seen this happen in cheaper screens before, so I don’t think it’s a screen defect.  When you tilt to one side you see dimmed color degradation (almost like inverted colors) and when you tilt to the other side the image is washed out (a more typical effect of cheap displays). 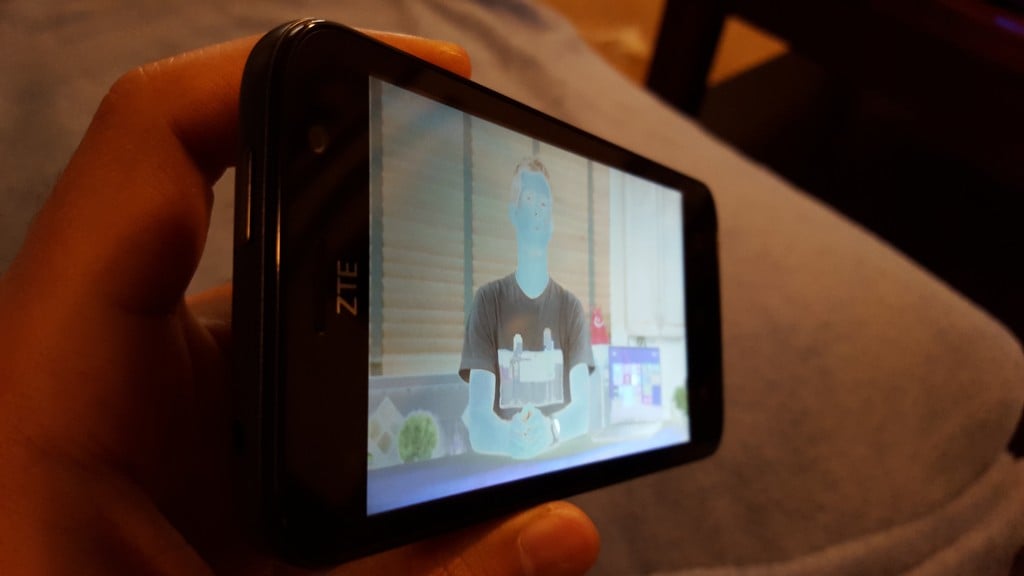 Both effects seem to merge at the middle (looking at the phone straight on), to give an OK image, but my eyes can tell something is not right.  The big problem is the viewing angle sensitivity.  It only takes a slight tilt for the image to quickly degrade in the manner determined by the direction you tilted it.  I have to keep the device steady and straight, or my eyes get a shot of unpleasantness.

If you can look past this issue, colors are alright, resolution is sufficient but not ideal, and outdoor visibility is modest. 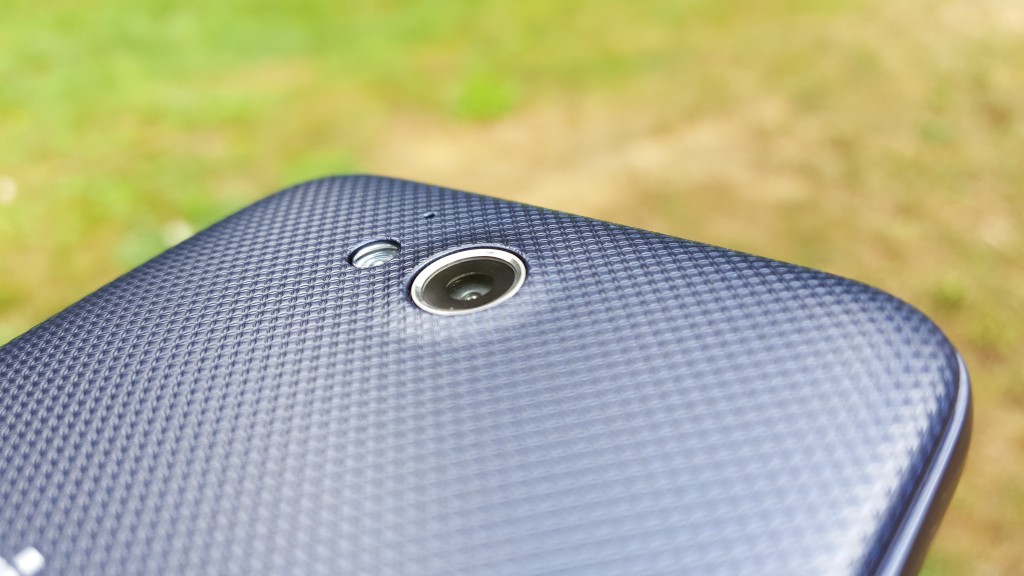 The Overture 2 is equipped with a 5 MP rear camera with single LED flash.  You can record at 720p.  I was impressed by all the features that ZTE through in, separated by three categories: 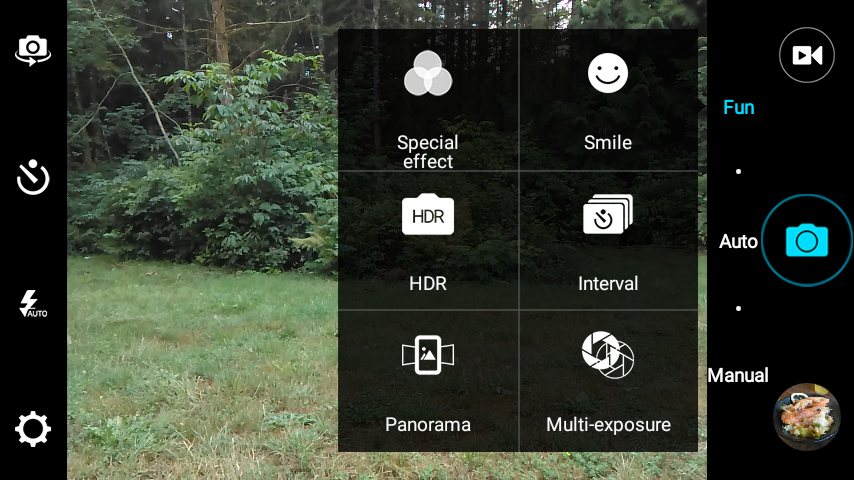 The quality of the images are in line with what I would expect for a phone at this price range.  In good lighting, we can get respectable capture.  But in situations with dynamic range, the camera can blow out lighting a bit.  Colors are decent, but lean a little on the dull side.  Detail matches what I would expect from a 5 MP shooter.  Image quality drops drastically in lower light, but this is not unexpected from a budget camera.

The front facing camera is VGA (0.3 MP).  It is similar to other VGA sensors I’ve seen, which produce grainy selfies.

The battery capacity is a respectable 2,100 mAh.  Although the back cover is removable, the battery is sealed in.  So you won’t be able to carry around extra battery packs.

On the bright side, it may be that you don’t have to.  I was left very impressed by the battery life this little guy managed to pull.  One day I charged it up in the morning and was out and about for half the day and only used 38% battery.  This was with typical operations:  Streaming music in the card, checking Google Maps, web browsing, and taking a few pictures. I used it on and off connected to Wifi the rest of the day and went to bed with 35% battery.  My overnight test (leaving it on, connected to wifi, while I sleep and checking it first thing when I wake up) produced an average result of 15% battery drain.

The Overture 2 also has ZTE’s power saver option.  Testing it produced similar results as the power saver that comes in stock Lollipop, unsure if it’s the same or not.  What’s different is the very welcomed power management controls. ZTE is known to add their own little touches to Android, and it’s no different with the Overture 2.  However, I do appreciate how minimal they keep it.  I can still see remnants of stock Lollipop in places, such as the sound priority control when you press a volume button, the drop-down notification/quick settings panel, and the dialer. The most drastic changes are the following: I really like that ZTE’s alterations to Android don’t feel like they’re deep in the system.  I don’t feel bogged down, or that stock Android is handicapped in some way.  There are a few apps installed by default (bloatware):  Evernote, AccuWeather, Deezer, AskMD, and several Cricket apps.  As with other carriers, you can disable them but not uninstall them.  This is especially annoying when you consider how little internal storage you’re given.

I’ve very glad to have taken the Overture 2 through its paces.  The performance that today’s entry-level Android can pull has left me quite impressed.  If it weren’t for the main concerns I’ve raised (poor display, camera lighting issues, and miniscule internal storage space), I could go as far to say I wouldn’t be too unhappy using this instead of my flagship phone.

But from the perspective of a consumer on a budget, I still consider the Overture 2 a great value despite the some of the weak hardware.  You can’t ignore the $50 price tag, and you’re getting a solid build, a terrific performer, respectable battery life, and the latest version of Android.