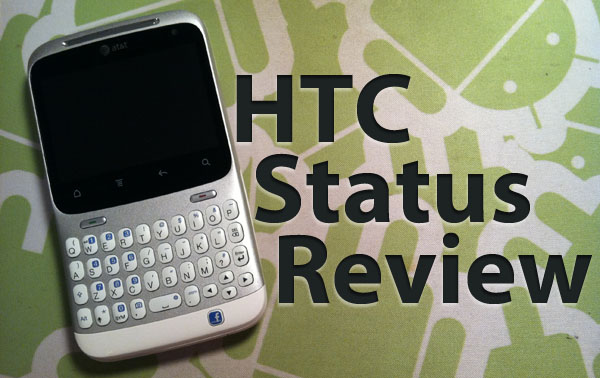 If Facebook is your thing, you will probably be interested in the HTC Status from AT&T. To start, here is a general overview of the Status. The specs include:

The HTC Status is the American version of the HTC ChaCha, which is available in Europe. Not only is the Status a social media fanatic’s dream phone, it also joins a new breed of Android devices. This breed is, of course, portrait QWERTY keyboard Android devices, that resemble Blackberries in design. The HTC Status will run you a low $50 with a new 2 year contract from AT&T. Check out the unboxing and my first impressions of the HTC Status below.

When reviewing these phones, I get caught up with all the features and forget the key purpose of a phone: to make calls. The Status seemed to work like your average phone, some calls had clear quality and others a bit distorted. The speakerphone seemed a little low but defiantly usable in a quiet room. The proximity sensor worked well and I did not accidentally hang up on anyone. Also, I did not have any dropped calls. Lastly, signal strength was decent, I toggled between 3-4 bars, although I used WiFi for data whenever it was available. 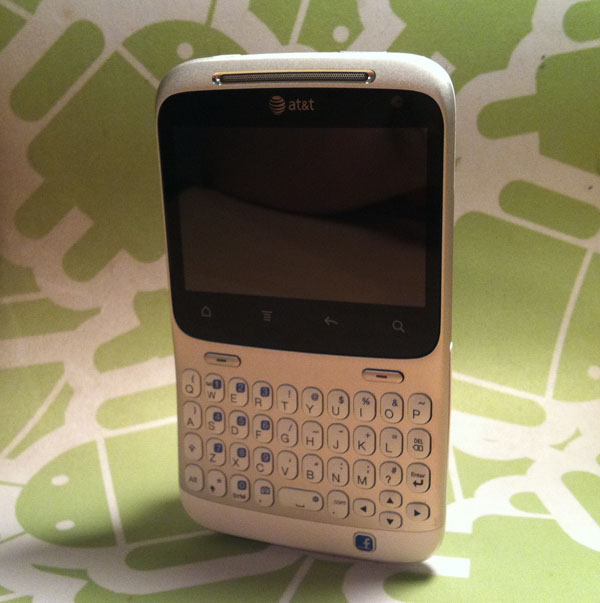 The Status offers a 2.6″ screen with a 480×320 resolution. It also has a full 4-row portrait QWERTY keyboard, navigational buttons, capacitive Android buttons, and a Facebook share button.. The phone itself is covered in both white plastic and aluminum.

The Status has an interesting look that appeals to some people more than others. I mean that in a “you love it or hate it” kind of way. I personally like the design of the HTC Status. The white plastic complimented by the aluminum looks very nice. Another feature I like about the hardware is that it’s very minimal. I like that the number keys are the same blue as the Facebook button. I also like HTC’s addition of  “Send” and “End” buttons. But my favorite feature on this phone is by far the keyboard. It was probably one of the best portrait keyboards I have ever used. The keys have a solid feel to them and offer the perfect amount of travel, and they’re spaced well.

Of course, as with many devices, there were a few features that were lacking. For example, the screen resolution is only 480×320. Its seems nowadays, the standard for Android devices is 480×800. Although the screen on the Status is a landscape-only screen, I think HTC could have bumped the resolution up a bit. Since the Status is a “Facebook” phone, one of the key features is the Facebook button. HTC, being as innovating as they are, could have found a better spot for the button, and had the button continuously blink while in a “Share” location on the phone. Check out my video tour of the hardware below.

The HTC Status comes preloaded with Android 2.3.3 and HTC Sense. HTC actually made a new version of HTC Sense called “Messenger”, based on version 2.1. This version of Sense themes all the Sense applications (Friend Stream, Calendar, Messaging, etc.) to look more natural with smaller screens. One of the major changes is the way you switch between HTC apps. Instead of the usual horizontal buttons and slider on the bottom of an application, the slider is located on the right side of the screen. This positioning let’s you scroll vertically instead of horizontally. Another feature in Messenger is the new launcher. The launcher has up to seven screens, which you can remove, as well as an “all apps” button in the lower left corner and “personalize” button in the lower right corner. HTC also included the new Sense 3.0 lockscreen in this build, along with HTC Hub.

Before using this phone, I was skeptical about how Sense would work on such a small (and horizontal) display. I would have to say HTC did a very good job at optimizing Sense for this odd screen. I really like that the “Sense Sliders” are located on the right of the screen in a vertical format. I really enjoy the new lock screen, and I was very glad HTC brought it to this device (although it is lacking “lock screen skins”), because it works very well. It’s a bit choppy at times, but overall a nice addition. I was also glad to see that AT&T allowed sideloading application for this device (it seems that they are moving in the right direction). AT&T did a decent job by not loading this phone up with bloatware (carrier installed software you probably do not use). AT&T included:

Since HTC made the Status a landscape-only device, you know you’re going to have some problems. There were a few (only 2-3 that I ran into) applications that have zero horizontal support, which means you have to hold the device sideways, and that can get pretty annoying. There may be a small amount of “portrait only” apps, but its seems a lot of applications (that have horizontal ability) have spots where there is only portrait use, which seems to be the most annoying part. You get nice and comfortable with an application, click a link, and then you have to rotate the phone. It can get bothersome at times. HTC’s new Messenger launcher suits the phone well, but has a pretty big flaw. When you’re using the phone, the “All Apps” and “Personalize” buttons are only visible from the first screen. When you swipe from the first screen, the two buttons fade away and leave with you the extra step of going to the main screen before opening your app drawer (cue ADW and Launcher Pro). Check out my video below covering the software of the HTC Status. To see the Facebook button in action, check out the video below where I demonstrate each scenario.

Personally, I am not a huge fan of Facebook, but I think HTC did a great job integrating Facebook throughout the OS. HTC really showed a future for further social integration (Google+ and Twitter) in the Android OS. They did not do as good of a job of managing your Facebook from the phone. I was able to send out content easily, but receiving it took time (going into Friend Stream, hitting refresh, then reading the updates | Go into Friend Stream, go to notifications, hit refresh, then check my notifications) and just seemed like too much. Facebook notifications for all mobile devices seem to be hit and miss. Overall, the Facebook button was good, the Facebook application was bad and needs work (although seems more like problems on Facebook’s end). Check out the video below going over all the Facebook button’s features.

The HTC Status offers a 5 megapixel camera with an LED flash and VGA front-facing camera. The Status also offers “High Quality” video recording (720×480). As you can tell from the camera and video specs, the camera is not the best. Obviously for $50 you aren’t going to get a point-and-shoot replacement, but you get decent shots out of this camera. I like to take macro (up close) pictures and the macro range seem to be very small (as in you cant get to close before losing focus). Compared to my Droid Incredible 2 (8MP), the Status camera can barley keep up. The video quality is nothing to write home about. As for the front-facing camera, light is essential when taking pictures. The brighter your surrounding, the better quality you will obtain. I really don’t want to bash the front facing camera, because it was very generous of HTC to include this feature in a lower end Android device. Below I have a video and photo sample for your enjoyment. 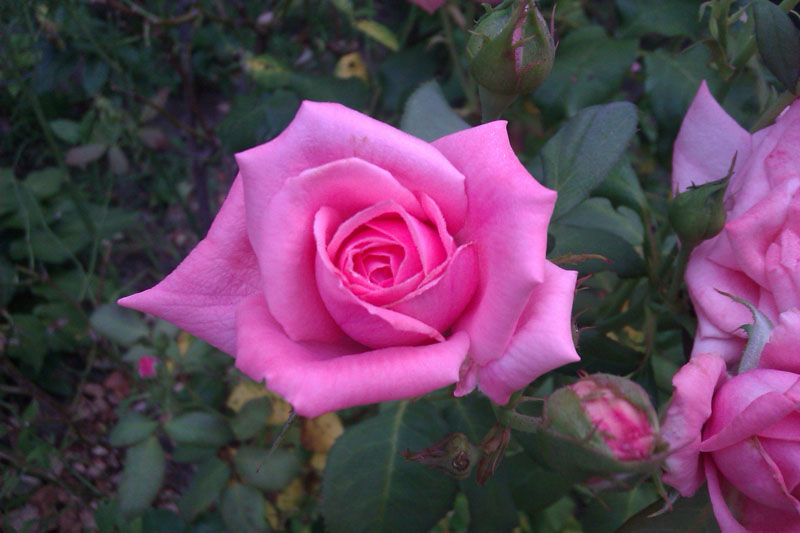 The HTC Status offers some usual specs for the time period (the age of dual-core and maxed out phones). The specs and battery specs are as followed:

I thought this phone was going to be slow because of the sub-par specs and HTC’s Sense UI. I was very surprised with how well this phone got around, with little lag and almost no glitches. HTC took a smart step by adding the 512MB of RAM, because it allows the phone to run multiple applications simultaneously without slowing down.

But of course, when using this phone, I did run into some lag. I really noticed this in the lock screen. You unlock the screen by sliding the circle up. I often swiped my finger up, and didn’t even see the ring move, but it would still unlock. I have to say one horrible feature on the Status was its internal storage. At only 512MB, and using the phone for about a week (only installing about 5-8 applications), I encountered the “Low Phone Memory” screen. From there I was prompted to move my applications to the pre-installed 2GB micro SD card or delete them. In all my time of using Android, I have never encountered that warning screen. HTC was able to boost the phone from the original 600MHz to 800MHz, but I think they could have bumped up the internal memory to at least 2GB.

With the battery, I got about 7-8 hours with the following daily use:

The HTC Status is no ordinary mid-range Android phone. It’s very responsive and has little lag. The overall Facebook experience could be improved, especially since it’s a “Facebook phone”. The camera lacked the quality most people would be looking for, but at least there’s a front-facing camera. The Status has a design that’s unique to Android, with an outstanding keyboard. With the low price tag of $50, this phone is perfect for teenagers, Facebookers, texters, and anyone wanting a good keyboard. The phone will by no means blow you away with speed, but it will certainly get the job done. I’d like to say thanks again to HTC and AT&T for sending us an HTC Status to review, and don’t forget to check out the full video review below.

So, if you could replace the “Facebook” functionality of this device with any other social network, what network would it be? Drop a comment below or on our Facebook Wall!