Ice Rage brings hockey to your Android device in the form of bears, brawls, and general mayhem.  It does not necessarily deliver these all the time, but the makers of WWII: Strategy and Tactics have created a fun, fast-paced, arcade-style hockey game so that you can deliver all the bumps and bruises you wished you could dish out in real life. 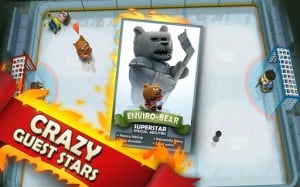 The title screen gives you everything you need to start Ice Rage.  Nothing fancy, just pick your character, Red for yourself and Blue for your opponent/computer, and select your game type.  There are a few game types that you can choose from that bring Ice Rage from a shallow game into waist-high depths.

Quick match is the normal quick game that throws you into the action.  Tournament mode pits you against the entire Blue team, and Rage-Off makes you defeat three enemies before your health runs out.  Multiplayer gives you local quick-match options and the Rage-Off where you battle and beat each other until someone’s health is depleted.

Starting a game gives you a few, minimal options.  You can select the difficulty:  easy, medium, or hard (which is a real challenge where you manually control the goalie), and you can select the one-button option (this takes away your control of the character’s movement so you only shoot and check).  I would like to see a lot more options like how long you play for, maybe a few costume choices, and the ability to add players into the fray.

[pullquote2 quotes=”true” align=”center” textColor=”#1cc73e”]The matches are quick and furious…over the top…you can be blown out or make an unprecedented comeback all within 10 seconds. [/pullquote2]

A game plays out in under a minute or two depending on which game type you are playing.  The games turn into a quick flurry of movement for the puck, and the controls mimic the ice so you have to prepare for sliding and looping turns instead of being able to do a 180 turn.  Shooting is imprecise as well which is part of the difficulty.  You can slow down to help aim your shot better or you can fire off a low-percentage shot that bounces around the boards.

All of this coalesces into a nice cartoony mixture of hockey and air hockey.  The matches are quick and furious, the checks and shots are over the top, and the imprecision creates a match where you can be blown out or make an unprecedented comeback all within 10 seconds.  However, what starts as a simple treat could be grown into a full-fledged hockey simulator.  It would be great to see Ice Rage have a full season mode where you build up your players and team.

That said, Ice Rage brings action-packed hockey to your device so that you can pick it up and play in just a few minutes.  Hopefully, Herocraft can transform Ice Rage into a franchise and make it deeper with more customization.