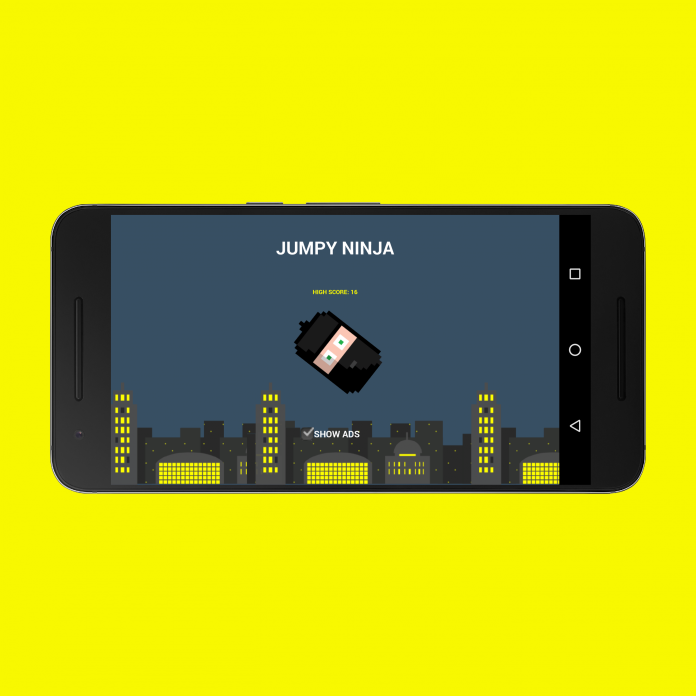 Remember when Flappy Bird’s popularity exploded? You saw people playing instead of working. You saw people trying to improve their high scores instead of paying attention to class. You saw reporters talking about it instead of broadcasting actual news. It was everywhere.

If mobile games weren’t simple enough, Flappy Bird demonstrated developers that a game doesn’t have to be complex in order to garner attention from players. With it came a lot of games with similar premises: a very simple game, basic controls, but unforgiving difficulty. Jumpy Ninja is the latest addition to that trend, with some twists to make it a little bit different from the highly-successful Flappy Bird.

Seriously, this game is as simple as it gets. You control a ninja that is constantly jumping. Tap on the left of the screen to move your character to the left. The same goes if you want to move your little character to the right. That’s it. You have to move your jumpy ninja across some floating bricks. If you fail to land on a brick, it’s game over.

The difficulty in the game comes primarily from the camera. It does not move with you, but at a pace determined by the game. It also tends to go faster the longer you play without dying. This gives you very few moments to actually think through your next movement. Thus, you get a sense of urgency and peril on each decision you take, making the game much more fun.

Unfortunately, that’s where the features end. There’s no Google Play Games integration, no options, no difficulty levels, no other modes, nothing. It stores your highest score, at least. One thing to note is that the game gives you the choice of toggling the ads banner at the top. Kudos to the developer for giving the option to turn off ads in an ecosystem notorious for its pesky ads and questionable monetization methods.

It amazes me how simple some games are, and, even though their mechanics are straightforward and forgettable, people still flock to them. Just like Flappy Bird, the game’s difficulty is its main selling point, since it creates a need to improve your previous high score. However, just like its inspiration, when the novelty wears out, you are left with just another simple game with a lot of missing features.

The lack of Google Play Games integration is a real shame since the social aspect of trying to improve your friends’ scores would fit right into the theme of beating your high score constantly.

You could argue about the rest of lacking features, but there’s a fine line between a simple game and an incomplete game, and, in my opinion, this game falls on the latter. I mean, there’s not even a pause button. There’s no music to be heard. There’s not a real sense of progression, just a high score you must beat. Also, my ninja has sometimes stopped jumping, resulting in me dying much sooner than expected, and for reasons that I can’t control.

Playing the game itself is really straightforward, although I had a lot of problems with the controls at the beginning. When you are moving your character to the right and then you press the left area of the screen, the character defies the laws of physics and stops its movement almost immediately in order to follow your commands. I was expecting a more natural-feeling control scheme, and having to adapt myself to the abrupt change of direction did take some enjoyment out of the first rounds.

In an attempt to emulate Flappy Bird’s tremendous success, Jumpy Ninja offers an equally simple game with a soft learning curve, but with a tough difficulty level. However, it ends up being way too simple for its own good. It’s not that we’re dealing with a unpolished game (although some minor annoyances regarding your character’s jump slash some points out of the performance department), it’s that, after playing, you end up wondering if that’s really it. Unfortunately, it is.