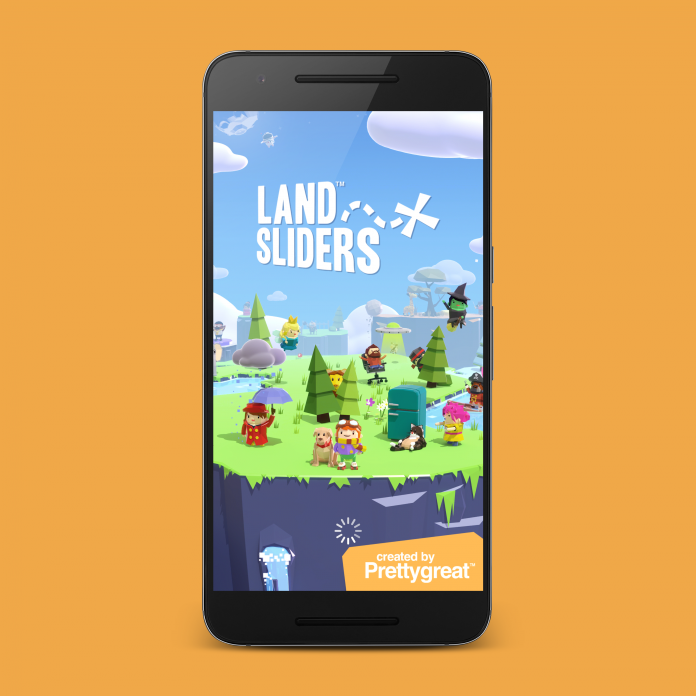 Game developers are always in search of different ways of doing things to stand out in the Play Store. Be it an innovative game feature, very easy-to-use controls, punishing difficulty, or new mechanics, companies are always trying to add new stuff to their offerings. Land Sliders successfully mixes several of these elements in a cute, challenging game with dead-easy controls and several characters to choose from.

After the usual Google Play Games integration, the game asks to choose a character. You will have three choices: a little guy called Turny, a panda, and a fridge (seriously). Unfortunately, just as choosing your starter Pokemon, you will not be able to choose the remaining two later. Well, at least you won’t have a rival choosing a creature that has a type advantage against yours. Anyways, there are more than 100 characters available, unlockable via in-game currency or in-app purchases. Each character can develop one ability by leveling up, but more on that later.

The game drops you right into a small tutorial after finishing its initial setup. Instead of opting for a text-based tutorial, the developer chose to teach you the controls in a smaller-scaled world created only for this purpose. To move your character, you need to “slide the world” by swiping on any part of the screen. This will make your character move throughout the world. If you prefer, you can also reverse the controls and slide the character instead. Tap anywhere on the screen and your character will screech to a halt. Controls feel responsive and are easy enough to understand, but they can feel a tiny bit imprecise in situations where you need bullseye accuracy.

The main screen isn’t actually composed of buttons that you have to press, but a small piece of land with platforms scattered over it. Sliding the world so your character presses any of them trigger the desired function. It’s a really neat way of implementing a main menu and, though it is slower to access each function this way, I think it’s a good trade-off.

Hovering your character over the red Play button will start the actual game. The main objective in each level is to find a platform that takes you to the next level. When you do, there’s a cool animation in which the ground beneath you rockets into the air to the next level. On several occasions, this animation has skipped frames, but it’s good otherwise. A thing to note is that, even though you always traverse the world starting from level one, there are many variations of each stage, so the game never feels monotonous.

The game would be easy if there was nothing more to it than cruising through levels. However, it’s not. There are multiple hazards and enemies trying to block your way to victory. There are dinosaurs jumping across the land trying to murder your character. Bulls storm towards you in a straight line in an attempt to pulverize your dreams. There are big bears that throw snowballs at you, freezing you for a while. Not only you won’t be able to control your character, but also, it will continue to move in whatever direction you were going, so good luck with that.

Fortunately, not all creatures are bad. There are gold-coated rabbits and monkeys, which you can touch and they will explode into coins or bamboos/meats/whatever your character likes (more on that in a bit). Or they can turn into bombs. You’ll have to smash into the character and pray for the best.

Also, some levels provide additional obstacles, such as having to get a key to open the gates blocking the platform to the next level, or some landmark-like structures that sometimes attack you.

There are also lakes and unprotected edges where you can fall, halting your progress. However, an exclamation mark will appear on top of your character when you’re at risk and you’ll have some very brief moments to return to safety.

Each world has elements scattered throughout it. Some of these items are dependent on the character you choose. For example, when choosing a panda, bamboos are dispersed all over the land. The game will sprinkle oxygen tanks when you choose an astronaut, Likewise, you’ll have to collect meat if you choose the lion as your main character.

Even though these items are different in appearance, their function is the same: leveling up your character. Since every character has a special ability, such as making opponents slower or decreasing the time you’re frozen by bears, this special trait gets more powerful the more you level up, making the game a bit easier.

Speaking of which, this game can get really hard. The first two or three levels are relatively easy (especially the first), but later on, there are so many threats and hazards that you won’t be able to avoid. You’ll have multiple things trying to kill you at once, and with environmental hazards, cliffs and water, you’re gonna have a difficult time. Even worse, you only have one life, and you get only one chance of reviving in case you die, triggered by a 30-second video ad. There’s no way of reviving otherwise, even with real money.

There are special platforms dedicated to quests. These are events that you can complete to receive more loot. Examples of these include hitting silver rabbits, getting a dinosaur to jump into a lake, get a certain amount of elements, and similar. Also, you can get an invincibility sauce, which works exactly as the star in Mario Kart. Smash through your enemies until the time runs out to annihilate them immediately.

Going through the rest of the menu options, you’ll see a place where you can buy new characters. Each one costs $0.77, but, since there are more than 100, things can get very expensive quickly. There’s also an option to change your hard-earned coins for new characters (at random). Also, there’s a free gift option that lets you open a gift box after a certain amount of time to receive coins and other perks.

Thanks to its Google Play Games integration, the game can show you leaderboards to compare your scores with people around the world. Also, you can get achievements if you’re into that. If you want to share your deaths and frustrations with the rest of the world, there’s also a Share function. The game supposedly shares a captioned screenshot of your last frame and then sends it to registered apps. However, I could never get it to work.

Graphics-wise, the game has vibrant, colorful elements. Characters and environments look blocky (slightly similar, but not equal, to Minecraft) and very simple, but because they’re meant to. This design choice makes every element more charming and gives the game an identity of its own.

Music follows the upbeat and happy theme that the graphics set, with different tones for the home menu, character unlock, and land sliding. Sound effects are appropriate, with bears growling very loudly and dinosaurs making a funny sound while they jump (because watching a dinosaur jump is really funny). Also, there’s an alert sound when some enemies notice you, so make sure you don’t miss those.

Land Sliders is a game with such an easy mechanic that you could master its controls within minutes. However, difficulty spikes really quickly, but what’s life without a challenge? There are many characters to choose from and Google Play Games integration to squeeze more fun out of it. Aside from minor issues, such as the inability of reviving through methods other than video ads, and some minor concerns about replay value, it’s a fun, polished that incorporates a lot of variety to its gameplay and can (and will) keep you entertained for days.