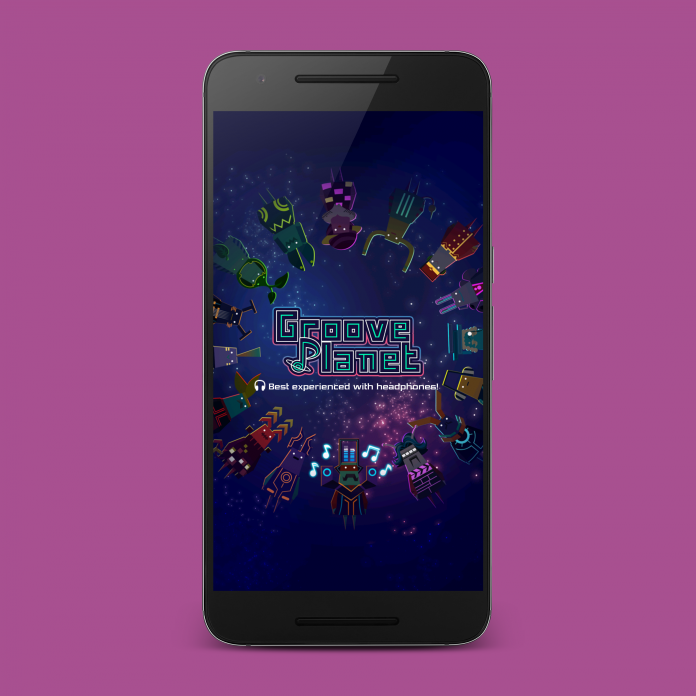 As an iOS app developer, I can’t imagine my life without music. I open Spotify before Xcode and Google Chrome to make sure I don’t go crazy. Music is an integral part of our lives, and several games have tried to capitalize on that importance. The most obvious examples are Activision’s Guitar Hero and Harmonix’s Rock Band. These titles were game-changing back in the days, and their success ignited several related series on mobile. Remember Tap Tap Revenge back in the App Store’s early days? Now, several years after that initial boom, Aminoca Brands presents Groove Planet, a different take on the genre with an interesting premise and amazing features.

After the usual Google Play Games integration, you’ll receive a welcome message by DJ Keith, a character similar to that guy who walked you through basic aspects of the game in Pokemon Red. He will make some (bad) music-related puns, and then ask you to name your planet. Yes, your planet. In Groove Planet, you’re the mayor of an uninhabited planet, and it’s your task to populate it through music.

DJ Keith will return to teach you the basics of the game. In fact, every time you need something, DJ Keith has you covered. Everything is actually pretty simple. Tap anywhere on the screen and you’ll get points. Tapping along to the rhythm of the song will make you perform combos.

Extending your combos will increase your bonus, which is a multiplier for the points you get with each tap. You can also slide your finger through the vinyl at the bottom to watch your city as it grows. If you slide to the beat, it will also count as a part of the combo, so you can mix your taps with swipes in order to check out the rest of the land.

These points, called notes, can be used to construct new buildings, which can generate new notes for you automatically. Each building in the game can be upgraded, and they generate more notes per second in the process. Upgrading your buildings will make people flock to your ever-growing planet, and you’ll start seeing more and more of them dancing to the tunes.

However, not all buildings are accessible from the start. One of the situations that I don’t like about this game comes from this fact. When your planet is full of buildings, you won’t be able to construct more. In order to progress in the game, you’ll have to create a completely new branch, which forces you to start the game from zero, albeit with a 100% multiplier bonus for the notes each building generate.

Although this is made to improve the game’s replayability, I don’t like deleting all of my previous work and start over just after some minutes. At least, the multiplier makes it easier each time you have to reset your game.

You also have a base (think of it as a town hall) that can be upgraded to get more notes with each tap. There’s also a hidden building called the Recorder, which will gather notes for you while you’re not playing. Pretty cool stuff!

To make things a little bit harder, there are UFOs that appear and kidnap your villagers. To protect your people, simply tap on the UFO and it will fall to the ground. There are also yellow satellites that work the same way, but, after being destroyed, show you a popup asking you to watch a video ad and increase your current amount of notes.

Sometimes, destroying these ships will earn you gems in the process. These gems can be used to buy notes, super charges or skip the effects of the chance roulette.

The chance roulette… I have a love-hate relationship with it. After a certain amount of time, a purple disk will appear from the bottom, letting you access the chance roulette. You’ll have to choose between three characters, and your choice can either yield you additional notes immediately, enter a 30-second period where each of your taps will earn an insane amount of notes, or lose notes/buildings. You can either watch a video ad or spend two gems to double the effect if it’s positive, or skip it if it’s negative.

Also, to spice things up, the game will give you a mission, which will be at the top of the screen at all times. These include destroying a certain amount of UFOs, tapping a specific number of notes, and construct a new building. Completing them will give you a significant amount of notes, so make sure you complete them.

Even though the game itself has a lot of features, it doesn’t have a lot of options. You will be able to turn on or off the music (seriously?), sound effects and a notification that tells you when the recorder has its notes ready. It is important to note that the game supports saving to the cloud, which is a big plus for people who game on multiple devices.

Graphics for the game are never complicated or overdone, but they follow the same dark, neon-lights, vibrant style at all times. When performing combos, your villagers will start dancing and there will be fireworks in the background, which is a nice and charming addition.

Buildings have very intricate designs and are a joy to look at, and special effects, such as when you tap the screen or upgrade buildings, are very pleasant. Unfortunately, when there are a lot things going on, such as building upgrades, long combos, and people dancing, some performance hiccups occurred. Nothing serious, thankfully, but it is worth mentioning.

A music game without a good soundtrack is like a Netflix session without pizza. There are eight included songs, all with an electronic, dance club vibe. Even though I’m not fond of that music style, there is no denying that the soundtrack is outstanding and catchy, and does a great job in immersing you into the gameplay.

One of the greatest aspects of the app is, without doubt, the ability to import your own music into the app. I frankly didn’t expect much when I first read about the feature. However, after trying several songs made by several artists and with different tempos, I can say that this aspect of the game works almost flawlessly.

The app somehow analyzes your track and adjusts its gameplay accordingly. You need to actually go with the beat of each song to rack up points. Jamming along Delain’s newest single “Suckerpunch,” Dragonforce’s fast-paced “Through the Fire and Flames,” and Queen’s classic “Don’t Stop Me Now” was a pleasant, smooth, and almost-native experience.

It is important to know that there’s no way to tell the game which folders to scan when it’s searching for music, so, if you have other music files (such as voice notes), unfortunately, they will appear in your library too.

Thanks to its Google Play Games integration, you will be able to complete achievements to increase your level. Many of these achievements are pretty hard, so you’ll definitely need some time to complete them. Curiously, the game also offers its own implementation of achievements. Some of them coincide with the ones offered through Play Games, some don’t.

Leaderboards will let you compete with people around the world in aspects such as UFOs destroyed, population, number of taps, and completed tasks.

With its captivating graphics, strong gameplay, and the option to add your own music to the game, Groove Planet manages to tick all the boxes. Although there are some minor annoyances, such as having to start over to unlock new buildings, and mildly pesky ads through chance satellites, the top-notch execution of the music library import is one of the best I’ve seen in a game. If you enjoy music (and who doesn’t?), then you’ll love tapping along to the beat with Groove Planet.

Slide and bounce to the rhythm of Tiles Hop: EDM Rush! (Review)