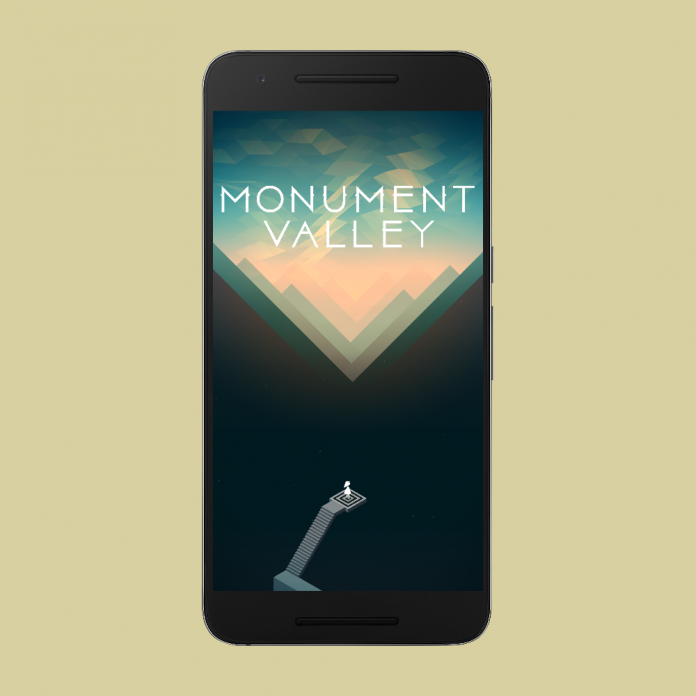 Every now and then, a developer comes out with a game so good that it gains critical acclaim by the industry and shapes it moving forward. Remember Flappy Bird? It wasn’t a complicated game at all (from a technical point of view) but it gained so much traction in the industry that even the developer could not handle it and pulled it from the stores.

The same can be said about Monument Valley, by ustwo games, a puzzle game that combines so many good elements on different levels that you are left wondering why does the developer is asking just $3.99 for it. It is easily the best puzzle game in the Play Store, and probably one of the best mobile games ever created. Seriously, I am not exaggerating.

You can see the philosophy of this game right from the beginning. You don’t get a conventional tutorial or anything. You get thrown right into this world and, after a couple of minutes, you will get the hang of the controls. If you tap somewhere and Ida is able to move there, then she will. There are also several elements that you can interact with, but I will not spoil the fun for you.

After finishing this very easy introductory level, which is actually Stage 1, you will get to the game itself, and then the fun starts for real.

The game will take you to the stage selection, which features a very nice spinning portal with the ten available levels. Yes, there are only ten levels in the game, but more on that later. Even the stage selection screen is one of the most beautiful I’ve seen, if not precisely functional.

Entering a level is like a box of chocolates. You never know what you’re gonna get. Although every level has (obviously) the same art direction and chill vibe attached to it, they’re very different from each other. Each one has its own unique setting and mood. From dark, eerie environments to gleeful, yellow tinted backgrounds, there’s no level that feels the same to another.

These levels are called monuments, and it’s all part of a background story. The fact that the game actually has a story, something that is so rarely seen these days on mobile games (and even on some console games), is worthy to mention (if a bit sad, since it says a lot about the current state of mobile game development).

Don’t expect something ground-breaking, though. There’s only so much you can tell in a couple of hours with very few interaction between characters. However, it is still nice to have a story to follow through, and not just wander aimlessly without any explanation of what is going on and what are we doing here.

Along the way, said characters will help you understand what is going on. However, most of the time you’re going to be cracking down these puzzles and just being in awe about even the smallest aspects have been thought of and executed in an admirable way.

Your mission is always to reach a goal at the top of these monuments. When this happens, Ida places a geometric object on top of it and clears the stage. Monument Valley is not like common games in this day and age, in which you earn coins, orbs, gems, or similar, in order to buy in-game stuff and move forward, so you won’t actually win any kind of in-game currency.

Rather, the developer is focused on giving you the best possible experience. If I had to choose my favorite part of this game, then it would be this lack of “pay-to-win” strategies that has plagued the store these days.

As you go through each stage, they get bigger and more complicated, with Ida “learning” new stuff (such as walking sideways) and new ways of interacting with the environment. Elements such as the crow people are introduced in later levels to spice things up.

At first, the puzzles are easy, but, as you progress through the game, you have to think more deeply about your next move. There’s no timer, score, or anything related to competition. This game is meant to be as relaxing as possible while providing a decent challenge, and that goal is fulfilled in a superb manner.

The only bad thing that could be said about this game is how short it is. Sure, it is a great experience that feels very polished, and probably generating these ten levels took an insane amount of time, but, when finishing the game, you still have this “I want more” feeling. It’s a shame that the game is not longer but probably the game developer had to choose between shipping it in its current state or spending more money and time developing it, and thus increase the asking price.

In case you haven’t noticed yet, graphics are by far the most impressive aspect of this game.They are not flashy or cutting-edge, but they way they have been done is what makes this game special and unique. As previously said, each level has its own unique character and setting.

Animations are extremely fluid and meticulous, while Ida’s movements are limited but fluid. Notable is the attention to detail by the developer, which can be easily seen thanks to the intricacies of each stage. This game is proof that you don’t need Need for Speed or Modern Combat graphics to create a visually appealing game.

Sure, those games look outstanding and it is sometimes even hard to believe that they’re being rendered by a mobile phone, but Monument Valley manages to look absolutely superb with its charming approach to graphic design.

Regarding sound, it tries to maintain the same tone set by the graphics and gameplay. Soothing music and simple sound effects are all you will hear in Monument Valley, and they do a superb job in not disrupting what is achieved by the other elements of the game.

Sometimes, a game comes that completely changes the gaming landscape. Super Mario 64, Pokemon Red & Blue, Metal Gear Solid, GTA: San Andreas, and Minecraft come to my mind as revolutionary games on consoles, while Candy Crush Saga, Clash of Clans, Pokémon Go, and Temple Run could be equivalent in terms of impact on the industry. I can confidently say that Monument Valley can be added to this list, thanks to its relaxing vibe, massive attention to detail and satisfying puzzles. While short, this game is easily one of the best games ever released for a mobile device, and one that every person even remotely interested in gaming should experience.

Download and install Monument Valley from the Google Play Store.