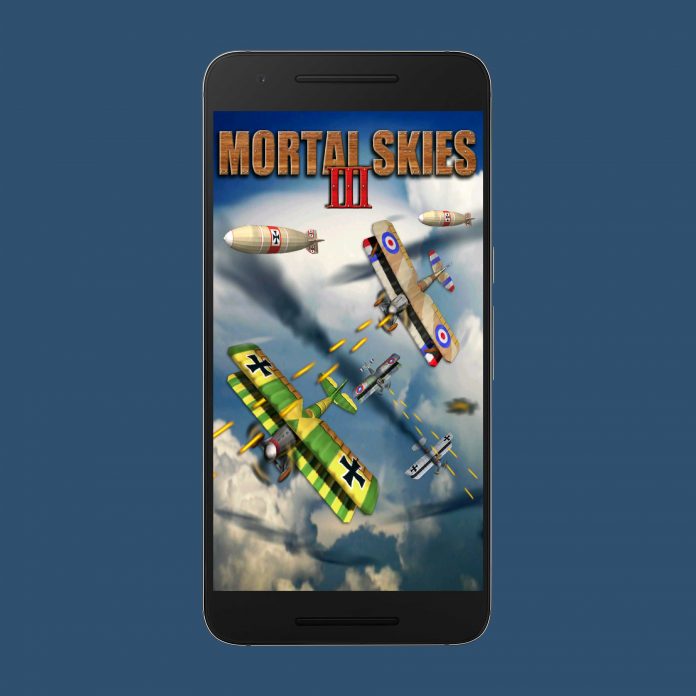 Mortal Skies 3: World War 1 puts you in the seat of your own aircraft, with only one goal in mind: to destroy all your enemies while avoiding your own death. Developer Erwin Jansen also added several elements to make the gameplay more fun and varied, such as power-ups, different types of ships and epic boss fights.

The game’s premise is so simple that you don’t even need a tutorial for it. You control a plane in a top-down field that is constantly firing, and your goal is to destroy as many enemies as you can before they take away the three lives the game gives you.

Normal enemy planes come in packs of four. Fortunately for you, most of them never fire at you directly. When you destroy the whole group, they may drop either coins or power-ups. Coins are used to buy new ships and guns, while power-ups have a temporary effect on your ship. You can get gun upgrades, missiles, fireballs, and even a couple of friendly ships beside you blasting at enemies.

Ships can also drop some special items, like napalm (which creates two big fireballs that destroy everything they touch) and a bomb that annihilates everything in sight.

Sadly for you, planes aren’t the only things that want you dead. There are some towers hidden behind walls that are ready to take you down. Also, elements like tanks, helicopters, and bunkers are ready to help the enemy in case everything else fails. Some of these enemies even shoot missiles instead of normal bullets, making it really hard to survive if you don’t annihilate them quickly.

Also, at the end of the match, you may get experience points, which can be applied to specific parts of your aircraft. There’s no apparent way of getting these back, so you’ll have to use them consciously.

I will repeat what I said in the title: the difficulty in this game is out of this world. I’m pretty sure even the developer acknowledges it, since there’s a slider for increasing (hell no) and decreasing the difficulty. Power-ups definitely help, but you don’t get them all the time, so you’re mostly on your own.

Other than that, the game is really fun. There are very few moments where you can rest; most of the time, you’re just dealing with the increasing amount of things going on. There are planes coming from everywhere, helicopters shooting you consistently, and huge bosses. On top of that, you have to deal with towers, bunkers, missiles, and everything in between. All of these factors combined result in an immensely fun game that will not forgive any kind of mistake or oversight.

Another thing I want to point out is that the game performs really well. Even when there’s a lot of ships, missiles and bullets flying around, I never saw the game stutter or drop frames, so kudos to the developer for optimizing the game.

As previously said, the biggest (and most peculiar) option is a slider to change the game’s difficulty level. It defaults at 100%, but it can go as low as 75% or, if you’re into masochism, as high as 250%. You can also change the music’s volume (but not the sound effects’ volume).

The game itself has barely appropriate graphics. Enemies’ planes (and your own) are bright and sufficiently detailed, while the explosions are decent. The background looks a little blurry, but there’s the possibility that the developer did this on purpose.

The biggest problem lies in everything that comes before. The game tries to adhere closely to a very old-fashioned theme involving wood and bolts (which may sound good on paper), but it turns out looking cluttered and unpolished. Also, there are some resources that are not big enough for high-res screens, so they appear pixelated on my Nexus 6. Since there are several phones with the 1440p resolution the big ol’ Shamu boasts, it’s not something that can be overlooked.

Music in the game is very upbeat. When I first heard the tunes, my immediate thought was “these tunes would fit in a Pokemon game.” There are very few songs, and the ones available are rather short, so they may start to annoy you after a while. Fortunately, you can turn it off altogether in settings. A little thing that bothers me is that you can clearly hear the moment where the tune loops, since it’s not as seamless as it should be.

Sound effects are also adequate. For the most part, they are well done and add a lot to the atmosphere, but there are also some of them that sound really dull (like explosions you would hear on a SNES game) and are not believable at all.

Behind the torturous difficulty, Mortal Skies 3: World War 1 is an easy-to-play game that’s full of twists and surprises. Unfortunately, outside of the core experience, there’s an interface that’s bordering on unfinished, and the music + sound effects combo is nothing to write home about. If you are prepared to overlook some glaring flaws, like some pixelated graphics here and there, and a couple of really bad sound effects, then you can definitely get some fun out of Mortal Skies 3.