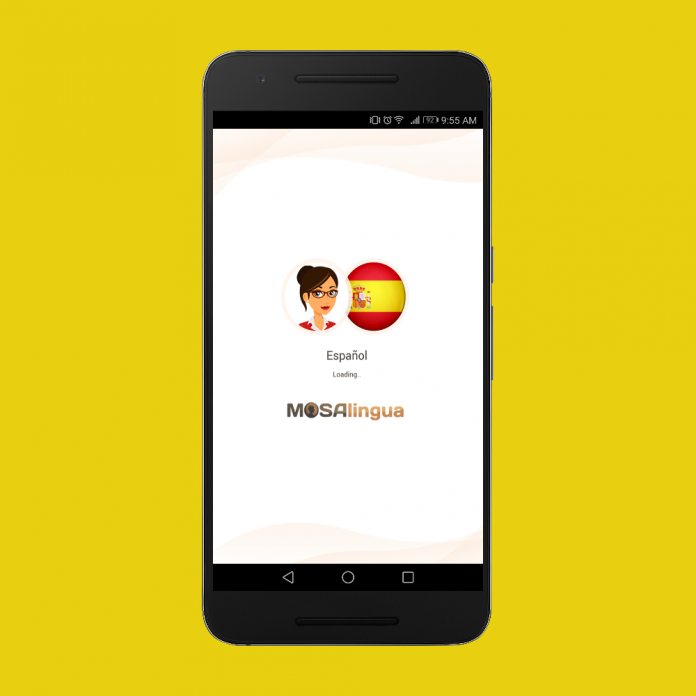 As the only native Spanish speaker in AndroidGuys, it is always amusing for me to see Android apps for learning Spanish. After all, it is a fairly useful language, with approximately 500 million people talking it natively throughout the world. There are different approaches for learning it, but MosaLingua Spanish uses a fairly common one: repetition.

Even though apps are trying to move from an extensive setup process and assume defaults that can be configured afterward, MosaLingua Spanish deviates from this approach and makes you go through a lenghty setup wizard.

First, in case you feel more comfortable in languages other than English, you will be glad to know that you can also learn Spanish with MosaLingua on the basis of French, Italian, Portuguese, and German. Also, in an effort to tailor the app to your needs, it asks you what are your motives for learning Spanish. Unfortunately for some of you, “Understanding reggaeton lyrics” is not one of the choices, but there are other possibilities for you:

In case you already know some Spanish words, MosaLingua Spanish lets you start at a higher level. However, for testing the app, I started from the very basics.

Finally, the app asks you to make an account. If you don’t want to, you can scroll down and press skip, but some features will be unavailable until you sign in. Nevertheless, it’s nice to have the option of creating the account later, in case you discover that the app is not for you.

Unlike other language-learning apps, MosaLingua Spanish is not based on a gamification approach, like Duolingo. Instead, you are the biggest input for it. If you are the kind of person who writes words into cards and goes through them constantly, then you’ll feel right at home here.

The whole approach is based on repetition. The app makes you repeat each word by talking, reading, and spelling it, and then asks you at the end how confident you are that you memorized it correctly. If you feel like you will have problems with remembering the word in the future, you can let the app know and it will bring it up on your next sessions.

There are different categories of words, such as eating, weather, and transportation, but the recommended way is to follow the order that the app gives you. In it, you go through basic stuff and gradually get more challenging words and expressions.

Each exercise is composed of a set of cards, which the app will first read out loud to you. Then, it will ask you to record yourself. However, it doesn’t give you feedback on how good or bad you did. It more or less relies on how you think your sound compared with the recording, which is, frankly, not ideal.

Then, it makes you memorize the words by looking at a picture of it. Yet again, it speaks the word to you, so that you not only memorize its meaning but its pronunciation. Finally, the app asks you to spell the word (or phrase) by giving you the letters (or words) in a scrambled order. It will give you immediate feedback on how good you did.

Through constant repetition, the app aims to slowly improve your Spanish level. Later, it also adds dialogue in conventional situations, such as asking for a table in a restaurant, buying medicine, asking for a taxi, and similar useful situations.

As a native speaker, I find these dialogues to be very useful for anyone who is learning Spanish. There’s a point where learning more words is useless if you can’t form a sentence with them, so this is a great way to use all of this vocabulary.

Frankly, I’ve used a variant of this kind of repetition method myself when learning German and Estonian, and I know several people who have used similar approaches, so I’m sure that MosaLingua’s research about this topic is based on real evidence and not just made up.

If your motivations for learning Spanish are not enough, then the app has you covered. It keeps you going by asking you to do your exercises every day and by showing you different stats, progress graphs, and videos by MosaLingua members in which they constantly encourage you.

If you find that the available content is not enough for you, there are optional packs with more words and exercises. These include advanced vocabulary, slang, and vocabulary for specific situations, such as news and idioms that native speakers use. These are all available separately or can be bought as a discounted pack.

The dialogue at first sounds very generic, but you can download a pack to improve its quality. I suggest you download it because audio recordings go from regular to top-notch with this. If you are interested to know, the dialogue sometimes uses the Latin American way of pronouncing “c” and “z” (that is, make everything sound like an “s”), and sometimes it uses the Spanish way (so they have a “th” characteristic sound, as in “thaw” or “theater”). Look it up on YouTube if you are unsure of what I mean, but this lack of cohesion between pronunciations could be very confusing for newcomers.

Regarding the interface of the app, I find that sometimes it looks like kind of unpolished. It feels as if the app was developed with one of these mobile web frameworks that then generate Android apps, instead of using native tools. Animations are not as fluid as they could be, interface doesn’t follow material design guidelines, elements such as alerts appear out of nowhere instead of using Android’s built-in animations, and the app itself feels like it was brought directly from the Jelly Bean days.

It also sometimes doesn’t feel responsive enough, and I found a bug in which if I went to the optional packs screen, tried to buy one but canceled instead of going through with the payment, and the app became unresponsive.

MosaLingua uses a different approach than several language-learning apps. Instead of incorporating a gamification aspect to the process, MosaLingua bases its method on constant repetition of words throughout time for the best results. Obviously, every person learns stuff in a different way, which is why we should be thankful that there are so many options. There’s a free version of MosaLingua Spanish if you want to evaluate its effectiveness first. If you are able to deal with a fairly antiquated interface, the content beneath it is good, and, in the end, eso es lo único que importa.

Download and install MosaLingua Spanish from the Google Play Store.