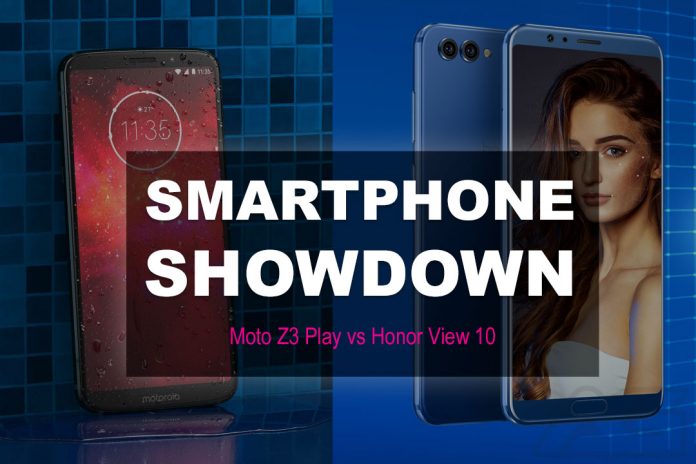 Not everyone is willing to spend $700+ on the fanciest smartphone on the market. Fortunately, you can easily get a high-quality budget smartphone that doesn’t compromise on features.

In the past, the term “budget phone” was usually a warning rather than a tempting proposition. That’s not the case any longer today when the market abounds with top budget phones.

The recently announced Moto Z3 Play and Honor View 10 are excellent examples of phones in this category. And given that they are offered at the same price point, we’re going to pit them against one another and see which one comes up on top.

Both Honor View 10 and Moto Z3 Play are trendy smartphones sporting the popular 18:9 aspect ratio. They are quite similar in size too, as the Honor boasts a 5.99-inch LCD FullView display with 2160 x 1080 pixels, while the Moto includes a 6-inch panel with the same resolution. However, in the former case, we have a Super AMOLED display.

Other similarities include the fact that both models feature a dual-camera on the back, although the sensors are quite different, as we will see below. Both cameras are protruding a little bit, and the Moto Z3 Play also has the Moto Mod pins on the back.

The Honor View 10 has a nice and sturdy metal construction. The design is pretty familiar: an integrated metal body and frame build with rounded corners and antenna lines along the edges. Sound familiar? It should because it’s quite similar to what the OnePlus 5T had going on.

In contrast, the Moto Z3 Play opts for a glass design. It’s a premium construction, one that features 2.5D glass on the front and back, sandwiched by 6000-series polished aluminum frame. And even if this makes the Z3 Play more prone to accidental damage, we can’t deny the phone looks extremely gorgeous.

Another big difference between the two is that the Z3 Play’s fingerprint sensor is now fashioned onto the right side of the phone. The Honor View 10 has it living under the display like you’d normally expect.

The two phones are quite different internally as well. The Moto Z3 Play leverages the Snapdragon 636 chipset, which is backed up by 4GB of RAM and 32GB or 64GB of storage. For its part, the Honor View 10 relies on an octa-core Kirin 970 processor which integrates the company’s NPU. It also ships with 6GB of RAM and 128GB of storage.

This NPU (Neural Processing Unit) chip adds a number of new features and improvements to the View 10 including the ability to automatically optimize the phone’s memory based on which apps are more used.

The phone’s camera also harnesses the power of the NPU to automatically select the best mode to shoot a certain scenario.

Speaking of the camera, the dual-camera on the Moto Z3 Play pairs a 12-megapixel sensor (f/1.7) with a 5-megapixel depth one. It’s a combination that allows the device to capture the popular portrait shots. It’s nothing that we haven’t seen before, but Motorola also includes a few fun features like Cinemagraphs. The tool creates a dynamic look with photos as it blends some animated elements to make the pic come alive.

The Moto Z3 Play also comes with deep Google Lens integration. So the camera can detect scenes and provide relevant info about it.

The View 10’s camera borrows the same shooting modes and features from the Huawei 10 with one major difference. The cameras are not Leica-branded. Even so, you can take advantage of features such as of AI scene detection, monochrome shooting and wide aperture mode shooting.

What about selfies? Well, the Moto Z3 Play has a modest 8-megapixel one with f/2.0, while the Honor View 10 includes a 13-megapixel front-facing camera.

What about the battery? To keep your phone in vigorous form, Honor has included a large 3,750 mAh battery that should last a full day with normal use.

But if that doesn’t seem enough, turn your attention to the Moto Z3 Play which ships with a 3,000 mAh battery. Even though the Moto Z3 Play features a smaller battery compared to the Honor, knowing how Motorola optimizes its phones, we expect to be pleasantly surprised when it comes to battery life. What’s more, if you buy the phone unlocked, Motorola will throw in a Battery Mod for free.

Now one thing that really sets the Moto Z3 Play apart from the Honor View 10 is Moto Mod support. The Z3 Play supports all current and future Moto Mods, so if you have an older Hasselblad Moto Mod laying around the house, you’ll be able to use it with the Z3 Play.

To conclude, we’re going to mention a few of more things. The Honor View 10 features a 3.5mm headphone jack, while the Moto Z3 Play does not. The latter also has an IR blaster, which is really rare these days.

Both phones have the same price tag of $499 when purchased unlocked. However, if you want a phone with a metal body, AI-powered cameras, tons of RAM and storage and a larger battery you’ll opt for the Honor View 10.

On the other hand, if you prefer all-glass phones, AMOLED displays and like the idea of having Moto Mods, you’ll go for the Z3 Play. Don’t forget, you’ll also get a free Battery Mod to go. The phone will be available for purchase in the US later this month.