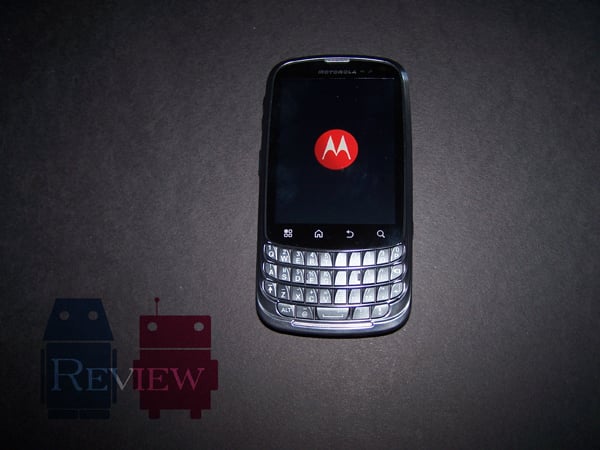 The Motorola Admiral was announced late October as the first Android-powered smartphone with Sprint Direct Connect. I had the opportunity to get some hands-on time with the device and want to share with you guys my opinions on this “business ready,” “military grade,” piece of hardware. We’ll take a look at the hardware, software, and every other “ware” you can think of to help you decide whether or not this Admiral is fit to run your fleet.

The Motorola Admiral was built to be “business ready” and shares a common business design most resembling its cousin the Motorola DROID Pro or a Blackberry Torch 9810 that doesn’t close. It has a very sleek QWERTY bar form factor with more curve than bar, giving it a classy look. It’s compact and lightweight but built to be tough. The Motorola ADMIRAL is designed to meet Military Standard 810G for dust, shock, vibration, solar radiation, low pressure and high and low temperatures, but believe me, you won’t be able to tell by holding the device, as it feels extremely petite and fragile.

I found the sides to be very smooth which made the device feel very slippery in my hands. On the left you have a volume rocker, Sprint Direct Connect button and micro USB port. The right side is pretty much clear with only a single camera button — which happens to be quite small in my opinion, especially considering it’s the only button located on the right side. 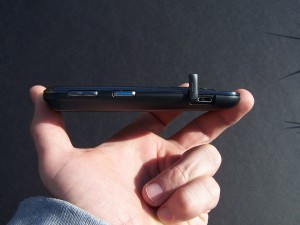 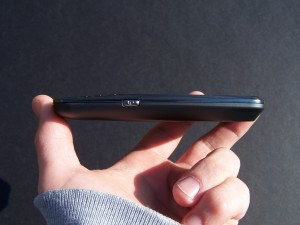 On the top of the device you will find a speaker phone button, a 3.5mm headset jack and a power/lock button. A microphone is located at the bottom of the device. 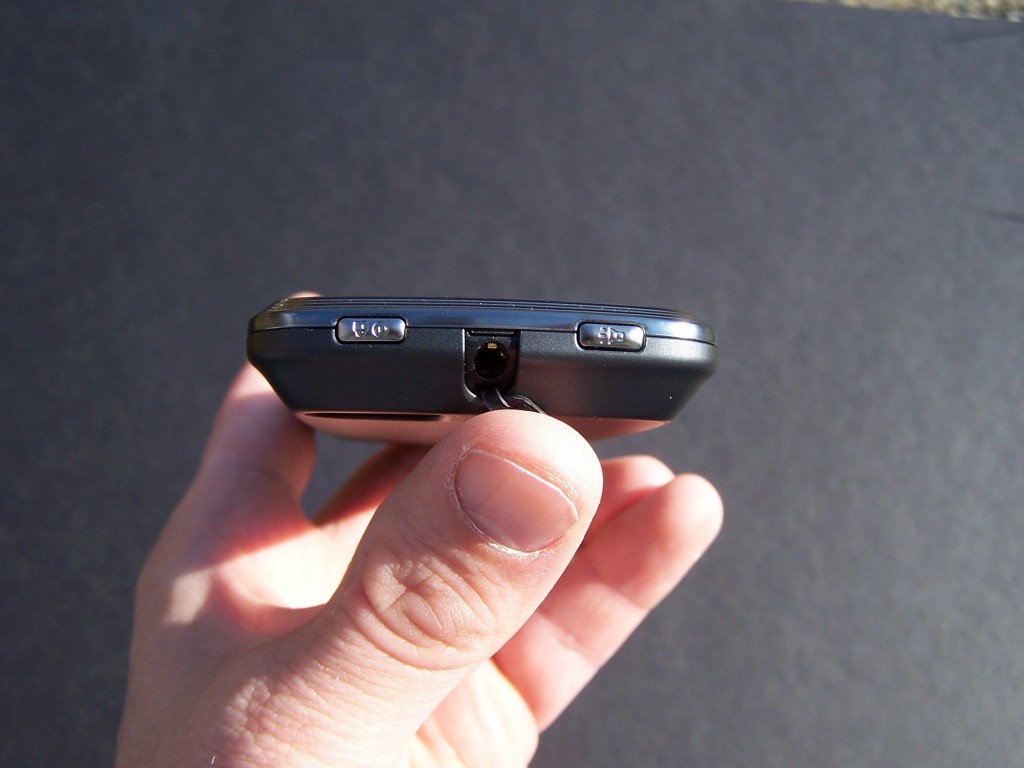 The front of the device features a 3.1″ scratch-resistant Corning Gorilla Glass display, with an ear piece and notification light at the top and four capacitive buttons at the bottom. Below the display is a 4-row physical QWERTY keyboard, a speaker, and a second mic. The back of the phone features a cover which feels like cheap plastic and had me worried every time I took it off to get at the battery. I felt like it was going to snap which doesn’t really fit my definition of “tough.” Also on the back, you’ll find the 5MP camera with flash along with the familiar Motorola and Sprint logos. 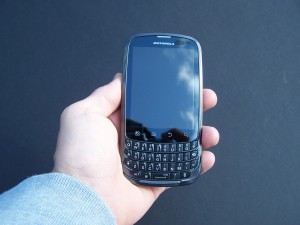 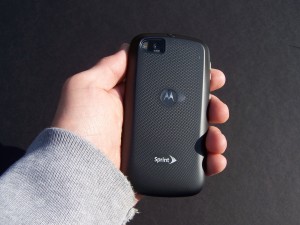 Under the hood you’ll find more than enough power to keep business moving. The Admiral comes equipped with a single core 1.2GHz Qualcomm MSM8655 processor, 512 MB RAM, a 1860 mAh Lithium-ion battery (which takes a while to charge) and 4GB of onboard storage, although I believe only 1.4GB is actually available to the user. The Admiral does have a microSD card slot for up to 32GB of expandable storage and you’re definitely going to want to pick a microSD card up since it doesn’t come with one. 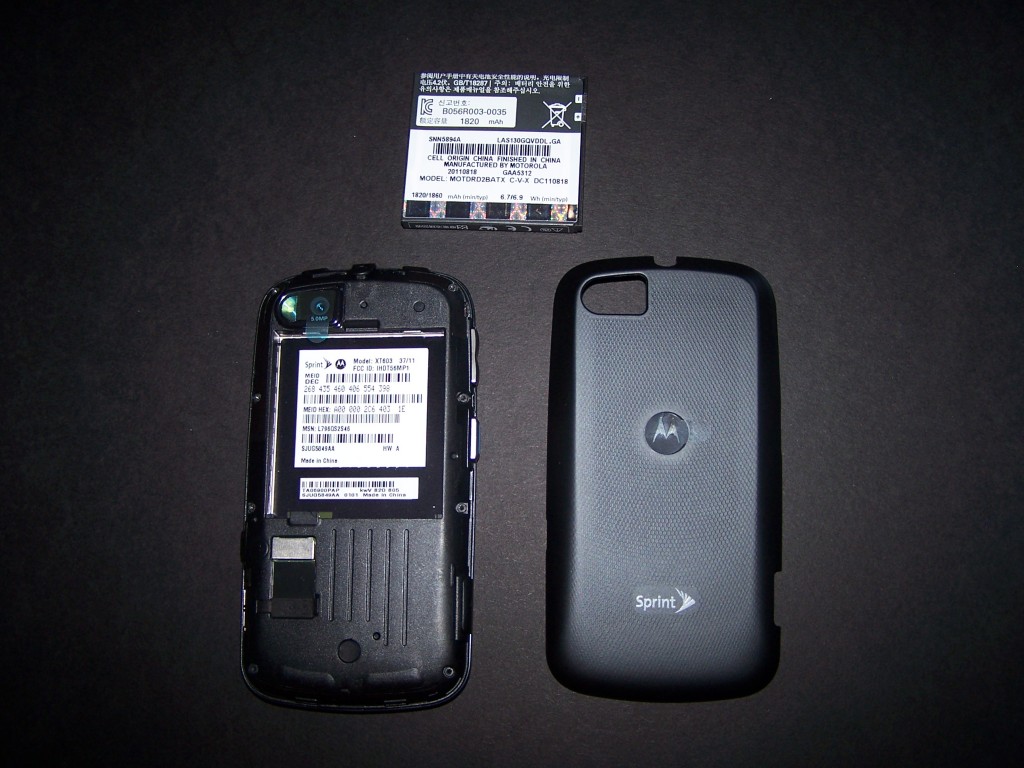 The Motorola Admiral features a 3.1″ VGA (640×480) tough Gorilla Glass touchscreen display. The display is quite small compared to the behemoths we’re used to seeing nowadays, but given that the Admiral is marketed as more of a business device, and features a QWERTY keyboard, the small screen size fits well. Viewing most everyday tasks such as phone calls, emails, etc. are fine on the small screen, but you’ll definitely miss those extra inches once you get into web browsing, videos and games. I have to admit, I wasn’t expecting much out of this little VGA display but was pleasantly surprised at just how crisp and vivid it actually was.

I found the Admiral’s QWERTY keyboard to be a little too compact for my liking. It’s a definite tough match for overweight opposable thumbs and makes for quite a few errors. Typing at a moderate speed was fine, but if you attempt a teenage speed text, your message will most likely resemble Klingon. Man hands beware.

The Motorola Admiral has a 5-megapixel camera with 720p HD video capture, LED flash and 4x zoom, but like most Motorola cameras I’ve used, I was not impressed. Quality was okay when taking pictures outside, but inside or under low light, photo quality was disappointing. Shutter speed is also painful, and there’s nothing I dislike more than having to wait 4-5 seconds after I hit the camera button for my picture to be captured.

Sprint Direct Connect is Sprint’s new push-to-talk network which uses CDMA EVDO Rev. A and allows simultaneous PTT and data. This is going to be the future of PTT on Sprint as they slowly phase out support for iDEN technology. Many changes have gone into this new system and it includes several great features such as the ability to DC up to 200 handsets in a TeamDC call, as well as availability notification. Direct Connect is probably the single most reason you’ll be purchasing the Motorola Admiral and was unfortunately the only feature I was unable to test — due to not having a single contact with a DC number. I apologize, but you’re just going to have to watch the video provided by Motorola to see how DC works on the Admiral.

You’ll find the Admiral running Android 2.3.5 with Motorola’s most recent “it’s not Motoblur” UI. While I personally prefer a vanilla Android experience, I will say that the Motorola UI reacts fast and is very responsive, in part, due to the device’s 1.2GHz processor, so no worries about performance. 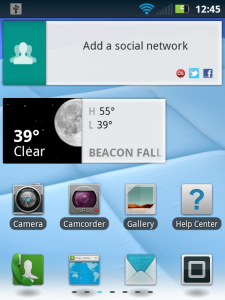 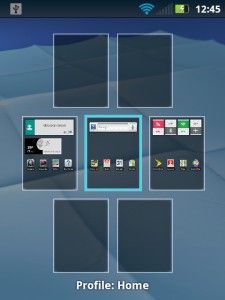 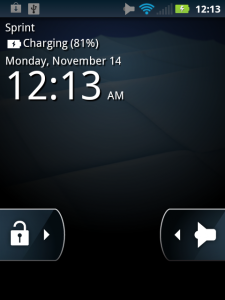 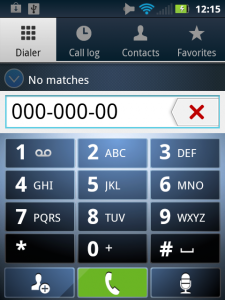 The Admiral comes preloaded with a few Sprint specific “bloatware” apps which for the most part can be uninstalled, but after that — it’s all business:

You’ll also find the use of “Profiles” to be helpful in maintaining mobile separation of work life and personal life. Switching between profiles is as easy as 1-2-3.

You’re most likely going to be buying the Motorola Admiral for work purposes so I’ll focus on that. The claim is that the Admiral is tough, and while I can’t vouch for its toughness (since returning review units in pieces is frowned upon), I will say that I’d feel uncomfortable using this device in a field such as construction. It just doesn’t “feel” durable enough and does not have enough of a grip to it. If you’re in a field where your mobile device really takes a beating, you might want to consider purchasing a rugged case to add protection and grip. Anyone in the business sector will love how sleek this phone looks and feels, but no matter what field you work in, one thing is for sure — the Admiral is ready to work.

It’s fast, reliable, features a responsive touchscreen keyboard as well as a full physical QWERTY, has Direct Connect and a battery large enough to last. Did I mention that the Motorola Admiral is only $99 on a 2-year contract? Not a bad price at all. As always, I recommend doing your own hands-on before making any decisions, but I’ll say this, I’d take the Admiral over a Blackberry any day. And for those that need Push-to-Talk, why not have it along with the worlds leading mobile phone OS!

To purchase the Motorola Admiral, or for more information, visit Sprint.com