Smartphone gimbals have been around for quite some time now, but I have never had the chance to use one. When I saw the MOZA Mini MX make its way into our review queue, I had to call dibs. Considering this is my first gimbal I will be writing this review as a beginner of sorts.

In a lot of ways the unboxing experience is my favorite part of a new toy and the MOZA Mini MX was no exception. The packaging wasn’t super fancy or anything, but the way it was presented was very pleasing to the eye. There really wasn’t a lot to it, the gimbal, a soft case, tripod, charging cable, and booklet. Minimal, but well presented.

I had asked on Twitter what were some things to look out for when reviewing a gimbal, and one of the suggestions was to see how well it did with a heavy phone. The heaviest phone I currently have is the Samsung Galaxy S20FE so that’s what I used for this review.

The process was fairly simple, although unfolding the gimbal was a bit of a challenge. Before I was able to actually use the gimbal the booklet says you need to download the MOZA Genie app. Once I got the app downloaded and the gimbal unfolded I was ready to go.

I put my phone in the gimbal, which ended up being a bit top heavy due to the fact I was trying to not hit the power button on the phone with the gimbal mount. My worries were unfounded; the way the gimbal holds the phone actually didn’t hit any buttons on the phone at all. Getting the gimbal linked with the app was fairly painless.

One thing that kind of bugs me though is the fact that I have to manually connect Bluetooth every time I turn on the gimbal. The gimbal will still work, but you won’t be able to use any of the buttons to take pictures or start recording video. It’s easy enough to get Bluetooth to connect, it’s just something I feel should be automatic and not manual.

Of particular note, Moza doesn’t include a charging brick in the packaging. I generally charge my devices with an Aukey 30W PD charger I have next to my bed but neither that nor the 60W MacBook Pro charger would charge the gimbal. I ultimately used a charging brick I received with my LG G8 in order to get the gimbal to charge.

Here’s a quick beginner’s tip: make sure your smartphone is as centered as possible. If you’re too heavy on one side, the gimbal will fail and just flop around. As someone once said “perfectly balanced, as all things should be.”

There are a handful of built in shooting modes and some will take advantage of the gimbal itself while others rely more on the included tripod. Including the tripod is clutch, especially if you want to use your smartphone to livestream or to just set up for a picture.

Back to the shooting modes, you get; Vertigo, Sport Gear, Time-lapse, Slow Motion, Inception and Fast Tracking. I seriously doubt I’ll be using much of these on the regular, but as I always say, “I’d rather have it and not need it, than need it and not have it”. 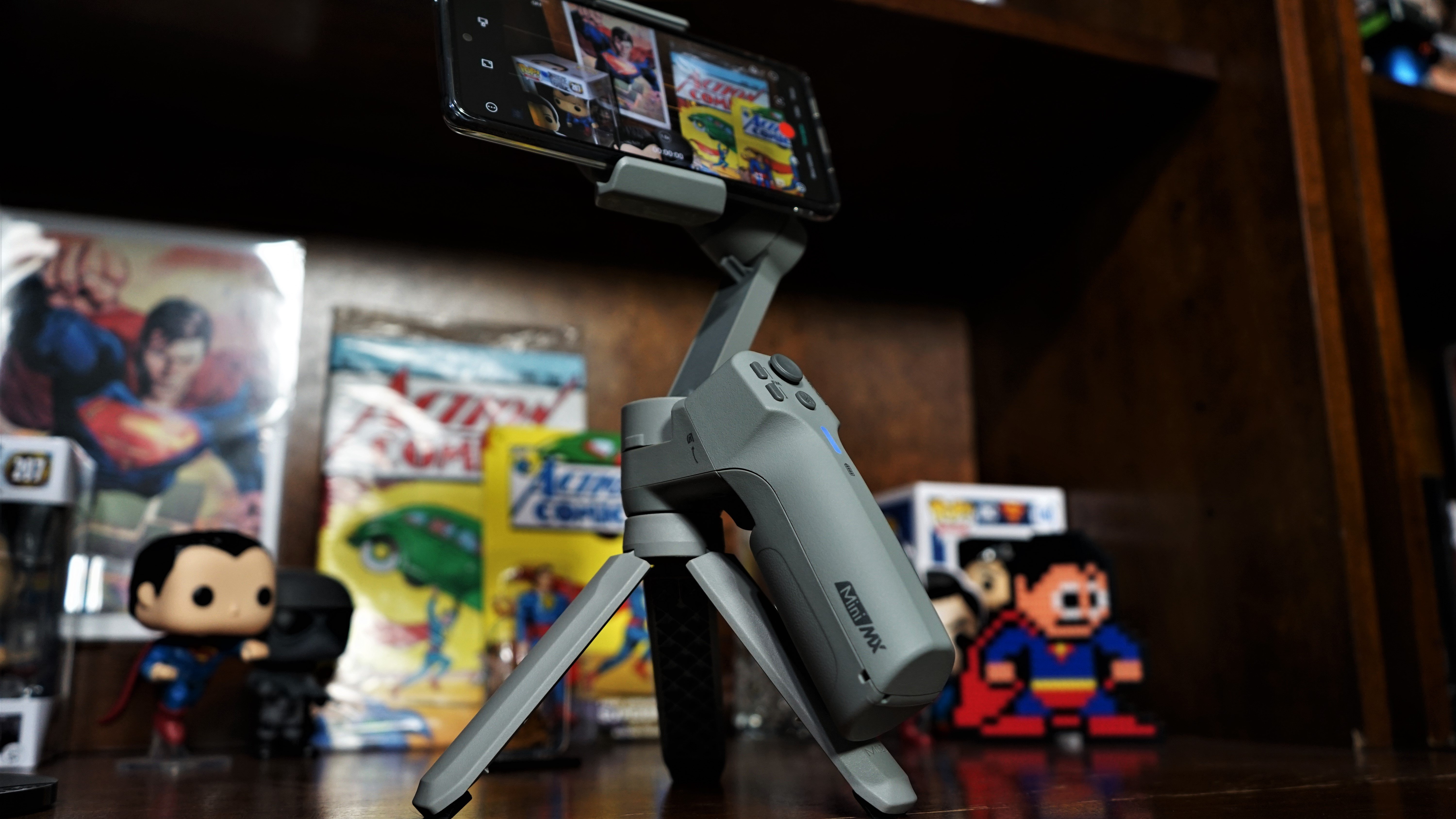 When unfolding the gimbal it can feel a little loose. Not cheaply made or anything like that, but almost too smooth in a way. Once it locks into place though, it definitely doesn’t feel like it will come out unless forced.

The MOZA Mini MX has some heft to it, it is solid, but not overly heavy. I don’t get worried that I have to baby the gimbal for fears that it will be quick to break. I am definitely impressed with the build quality.

It’s also light enough that it won’t kill my arm after holding it for a good while. I’m looking forward to using this for birthday parties and events where kids open their presents.

Once everything is set up it works incredibly well. The MOZA Mini MX has a long battery life (20 hours), and even comes with it’s own tripod.

Really, the only thing I would change is the fact that you have to manually connect Bluetooth. It’s definitely not a deal breaker but just something to be aware of and hopefully something that could be fixed in a software update.