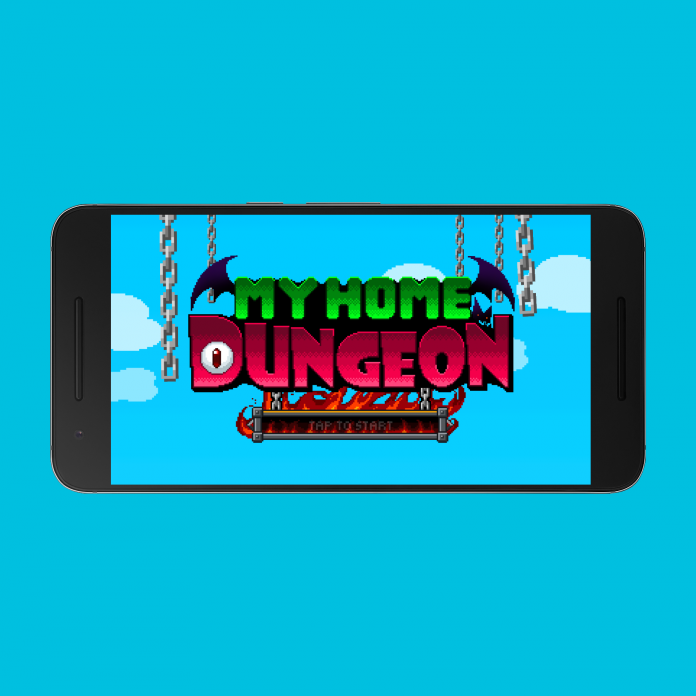 With the increasing amount of “endless” type games that feature almost no story and no progression, it is nice to see more ambitious projects such as My Home Dungeon. Developed by BerryRabbit, the game features an actual story, character progression and more depth than what you normally find these days in the Play Store.

Just as you open the app, it will ask you for permission for accessing your contacts. It’s like apps don’t even try anymore. I’ve played several hours of the game without one single instance in which my contacts are required for some kind of functionality. Why then? This is a widespread problem across the Play Store and it has no sign of stopping.

Anyways, after this, the game will take you to a short tutorial. The game will teach you in a funny way the basics of the gameplay. Let me take the opportunity to mention that the initial story of this game is hilariously ridiculous. “Oh look, there’s a huge, monster-riddled dungeon just beneath my house! And for some reason I am broke and selling it but I carry a fire-spewing sword with me everyday! And also I can throw fireballs!”

There are four main on-screen buttons: two at the left, which are used for moving your character, and two on the right. The action of the first right button depends on the circumstances. You have a bar at the top, and if it is filled up, then you launch a very strong special attack. If the bar is not filled up, then you have two medium-powered attacks. After that, you just have a VERY weak sword attack that is better left unused.

The second button is used for generating fireballs. You can hold this button and your character will generate a continuous blast of fireballs. This will turn out to be your primary weapon throughout the game.

Monsters come at you in waves. There are normally three or four waves per level. After clearing each wave, a new section will show up and you progress until you reach a boss level. These bosses can vary from giant variations of the monsters you normally see to thought out, challenging boss fights.

These boss sections are also where the story unfolds. At first, the story is confusing but it starts to make a bit more sense as you keep playing. Something interesting is that the story gives you choices, and the story tends to change a bit depending on what you choose. For example, I managed to make a boss angry at me and increase its powers because of an answer I selected, so be careful about that.

Monsters spawn from the sides of the stage, and thus, you need to carefully plan how you will approach each stage. Since there’s no way of jumping or similar, you can easily get stuck in the middle of two or more monsters without any place to go. If you deplete your three hearts, either by hitting monsters or by touching spikes, it’s instant death. You can either try the level again or watch a 30-second video ad to repeat only the last wave.

When killing monsters, they will throw gold and some energy orbs. Gold can be used for buying new equipment and increasing your character’s level. Also, you can increase the power of your fireballs and sword skills. If you are impatient, you can also buy gold through in-app purchases. The energy orbs will replenish the previously mentioned bar so that you can perform your strong sword attack.

Overall, the game feels very balanced. There’s no instance in which you feel that your death has been unfair or that it gets prohibitively hard just to push you to spending money on gold. It might get a bit repetitive after a while, though.

The way your character moves around the stage is almost as if he was walking on ice (which he actually does, in some stages), so you have to get used to it in order to avoid crashing into a monster by accident just because you moved your character in a wrong way.

Graphics for this game are weird. On one side, we have pixel-style sprites for the majority of elements in the game, including your character, monsters and scenery. On the other side, the game presents very polished and not-pixelated elements on the main screen. Also, this same line of design is used for sprites and characters when there is on-screen dialogue.

Both elements clash with each other and give the impression of not being cohesive. It’s like two developers didn’t communicate with each other at all and then asked the design team to create assets for each of their parts.

This doesn’t mean that the graphics look bad. I like the polished assets much more than the pixel art (especially because now it seems that every game is trying to do pixel art), and I believe that the game would benefit greatly from either converting everything to pixelated sprites (probably easier, since the majority of elements have been drawn this way) or to polished art.

Just as with many games nowadays, sound is good enough for what it is intended. Sound effects are there but they don’t excel in any way. Music for the normal levels is the same, so you will probably get tired of it at some point. For some reason, I love the boss music. It is very dramatic and enhances the act of fighting against the boss.

One of the good points of this game is that ads and other ways of monetizing the game are not intrusive. You never feel like the game is pushing you to buy gold, and there are no ads thrown at your face for no reason. Instead, the developer has made them optional, and you can totally do without them.

There’s also a way of earning gold by watching 30-second videos. If you don’t want to, then you can always repeat previous levels and earn gold that way. It’s your choice, and not the developer’s, if you want to go through ads or not. This is something increasingly uncommon in the Play Store, and for that, I applaud and thank the developer.

My Home Dungeon combines RPG elements with a very simple gameplay and controls to make an appealing game that can keep you entertained for a while. With the different options to increase your character’s strength, monsters getting gradually stronger, and no ads being forced down your throat, you can be confident that My Home Dungeon is worthy of being in your Android’s internal storage.

Download My Home Dungeon from the Google Play Store.