In Newton Drop Dash!, you are an apple trying to get to the bottom and hit Newton on the head so he can discover gravity. There are three lanes, and one or more will be open for you to move through. Alternatively, one or two will have obstacles that want to smash our little apple friend. 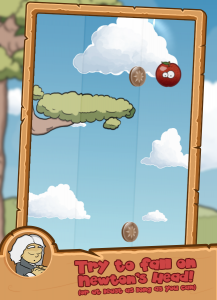 Hit one of the obstacles and SPLAT! Game over.

You will need to avoid trees of all shapes and sizes, as well as those pesky penguin-looking birds that fly across the screen from time to time. Tapping on one of the three lanes moves the apple into that lane. Move quick enough and you will avoid even the peskiest PengBIRD! 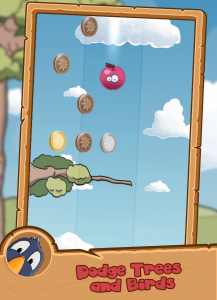 While falling and avoiding the trees and birds, you will want to collect as many coins as you can. Bronze coins are worth one, silver are worth two and gold are worth five.

There is also a red bar at the top called the fever bar. The bar fills up as you collect coins. In theory, once full, it will trigger FEVER time. However, in my time playing the game, I have never collected enough coins to fill it. Coins will also help you buy things in the store. More on that later.

So, as we are still falling… We see trees, pengBIRDS, coins, and… Power-ups! Because what falling apple couldn’t use a few power-ups, right? Rockets, magnets and helmets OH MY!

The rocket power-up speeds this little apple up and allows you to blow right through any obstacle in your way for a short time. 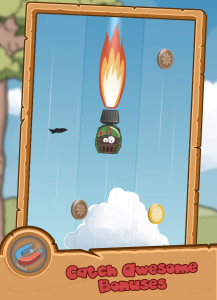 The magnet pulls all the coins that are on the screen to you for a short time so that you don’t have to move to collect them. The helmet gives you the win over the next obstacle you encounter by not making the apple go splat when you hit it. These three power-ups give your apple an advantage over the obstacles in your quest to get to Newton.

As we fall further down the map on this journey to the bottom, the seasons will change. I have only gotten far enough to see summer and autumn but I am sure winter and spring are down there waiting for me somewhere.

Remember I told you we would come back to buying things with all the coins we collect? Here you go. There are many things in the store that you can buy. Want to make that rocket blast last longer so you can make it further while not having to worry about any obstacles getting in the way? 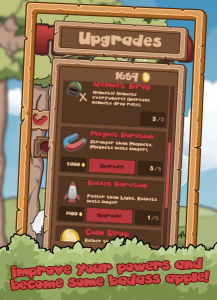 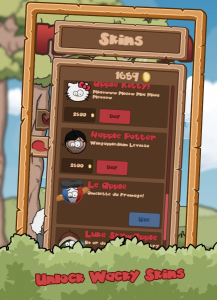 Just collect enough coins and you can make that happen.

There are also wings that make you move faster side-to-side. Other power-ups are also here and you can make them more powerful by spending coins.

We also have the ability to dress the little apple up in cleverly-named skins. My favorite is Luke SkywApple. These things add to the game’s fun factor and make it worth playing to get coins.

This game is really fun. It is hard, but not so hard that makes me want to give up. I find that I would drop a certain distance and then the next few times, I would get a lower score. Immediately after that, I would beat my previous longest drop out of nowhere.

The power-ups are fun to get and buying new ones to make them better is also a nice way to keep me playing. The fact that it only takes a few minutes max to play a few rounds is good too because I still have stuff like work and family to attend to.

The first bad thing I noticed about this game is the ads. They pop up every few games and are mostly the same ad for Mobile Strike. This was really annoying for the first little bit when I was playing. But there is only a six-second wait, and then you can close the ad. I would rather not see ads, but, since the game is free, I understand the developer needing to put them in there. One other bad aspect of this game is the menu. It is a little confusing and takes some getting used to.

All in all, this is a fun game that will keep you entertained for a while. It’s hard, but not too hard. The use of 6-second ad is annoying, but I understand why they have to be there.

Credit: Credit AshCorp for the screenshots.