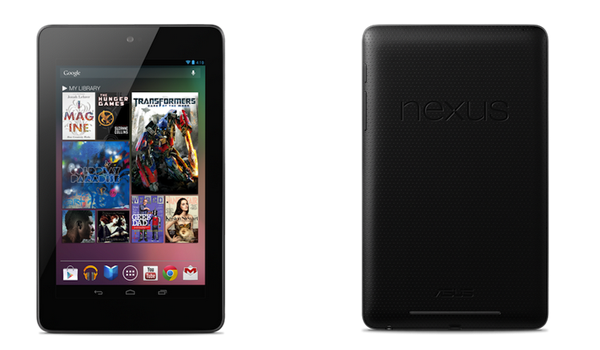 What we liked:  Priced to sell, the $199 sticker puts this in conversations for anyone considering the Kindle Fire.  Android 4.1 Jelly Bean is considerably more than a minor update to Ice Cream Sandwich; Google Now is easily our favorite new feature.  Fast on every front, the Nexus 7 is the new standard for Android tablets, thanks largely to its quad-core Tegra 3 CPU.

Room for Improvement: We’d love to see microSD expansion and a rear camera if only because that’s what we’re accustomed to seeing on tablets.  Moving the speaker(s) to opposite ends would also improve our experience for games and HD movies.  The placement of the volume and power buttons require a bit of familiarization as the tapered design makes them feel like they are on the backside.

Review at a Glance: Next to the Samsung Galaxy S III, the Nexus 7 was the worst kept Android secret of 2012.  After rumors started in late 2011 that Asus and Google would be working together on a tablet in the Nexus name, the conversation quickly shifted from if it would happen to when it would happen.  Now that Google I/O 2012 has come and gone and the Nexus 7 has been delivered, we turn out attention to whether it was all worth the hype.  We say it is most definitely worth every bit of anticipation and even more.  We hate to employ the overused phrase, but the fact is the game has changed.

We could go into a long-winded diatribe about the hardware and whether it is justified by the $200 price point but that would be a waste of time.  Simply put, there’s no other tablet on the market that competes at this price.  What about the Amazon Kindle Fire?  On the hardware front, there’s no comparison.  Among other details, the Nexus 7 offers a considerably faster processor, higher resolution display, a front-facing camera, and Bluetooth. If you are in the market for a true Android tablet and need to watch your pennies, this is the one to buy.

Much is said about whether the 7-inch display size is right for Android and if users should instead consider a 10-inch model. No, you should not.  Time and again I find myself happily returning to the Kindle Fire and other 7-inch tablets for reading magazines, books, emails, and other apps.  Titles such as IMDb, TED, and Currents work wonderfully on the portable tablet and really shine here with the 1280×800 resolution display.  That’s not to say a 10-inch tablet isn’t right for anyone or that we wouldn’t love to get our hands on the same experience on a larger screen.  The 7-inch screen is much better for typical users than they think, and it’s a huge step up from 3.5-inch and 4.5-inch handsets.

The NVIDIA Tegra 3 processor inside the Nexus 7 is a screamer and performs as well as anything else we’ve played with in the past.  While some credit is due to Android 4.1 Jelly Bean and the Project Butter stuff, the quad-core CPU has handled anything and everything we’ve thrown at it so far.  Games such as Zen Pinball THD, Dark Meadow: The Pact, and Sonic 4 Episode II THD not only look gorgeous but they play exceedingly well on the 7-inch display.  Hate to obstruct your view with fingers and hands? Hook up a Bluetooth game pad and watch how immerse your games feel.

I’ve long held the opinion that mobile games are best served casual but am quickly learning to love console-like quality titles.  Whether it’s the quad-core CPU, the 12-core GPU, or a combination of the two, I love how water effects, smoke, lighting, and other features get a chance to shine on the Nexus 7.

Although we’re familiar with seeing a rear camera on our tablets, it’s hardly something we ever use.  That said, we immediately missed having one for taking pictures and loading apps like Instagram.  Sure, we could sideload whatever we want if we really tried, but we found ourselves wanting to snap a photo or two from the Nexus 7 only to switch to our phone.  It’s certainly not a deal-breaker for us but we’d like at least a 5-megapixel camera on the device seeing as how portable the tablet is. If you’re going to add in NFC support for usage outside of the home and office, then why not add this in?

Generally speaking, the Nexus 7 is a sharp tablet with a unique soft-grip backside that feels like it might get dirty.  Our version has a white rear and initially felt like it would gather oil and dirt however a week later it’s still nice and clean.  There’s a lot of bezel around the display and I’ve heard plenty of complaints about wasted space.  After using it for a few days, I’ve come to block this out, if not appreciate it a bit.  Given that my tablet use is more for consumption of media and reading, I like that I do not accidentally turn pages or swipe to additional screens. As for the extra space on the top and bottom, though, I cannot make up a good enough reason to justify all that black.

Android 4.1 Jelly Bean is a significant step forward for the platform and it’s much bigger than we could have envisioned.  We’d have been perfectly fine with Google calling this a 5.0 release as it has all sorts of wonderful stuff that is very obvious to users.  Starting with the ability to launch into Google Now, one sees that this is a different Android experience. Toss in some speedy animations and effects and you see that Google really cares about how things looked.  If you’ve been with Android for a few years then you know just how simple (read: ugly) things could be for apps and general settings.  The UI is sharp, clean, and continues on the foundation that was built with Android 4.0 Ice Cream Sandwich.  Android was initially known for being more powerful than other mobile platforms but it’s not hard to say that future releases will be more beautiful than others in the space.

Even in its first few days Google Now has emerged as the clear winner in assistant and voice activated apps.  Why?  Because it delivers everything you want or need, and without prompt.  Why bother asking what the weather is or how long it will take to get to your appointment?  A simple swipe of the screen gives you this information, and more.

The best part of Google Now is that you don’t train it in the ways you would typically teach an app, it just observes you and your habits.  Spend any length of time at a particular destination or place on the map and Google thinks it might important to you.  Every so often you will see Google Now suggest a spot to you and ask if it’s important, providing at-a-glance ETA and traffic details.  Ask Google Now a couple of times whether your favorite baseball team won and it’s going to start telling you ahead of time.  What’s more, it also provides a seamless way to purchase tickets to the next game, if that’s your wont.

As many of you already know, additional features of Android 4.1 Jelly Bean include offline voice-to-text, smart widget placement and sizing, and a quicker way to view photos.  While each one is a cool option or selling point on its own, this is one of those “the total is greater than the sum of its parts” scenarios.  Spend more than a few days with Jelly Bean and you will find older versions of Android somewhat maddening.  Why can’t I move my widget to the bottom of the screen without moving each icon first!?  Why can’t I compose an email using my voice while riding on the subway?!

I’m sure I’m not the only one to hope that the Nexus 7 is the start of a regular series of Android tablets designed to move the platform forward.  Larger players such as Amazon will be pushing their agenda forward with new designs and attractive price points.  On the other end, smaller companies with tablets hovering around $100-$150 will get more powerful all the time.  Here’s to hoping Google circles back once a year to say, “This is where we think tablets should be and how much they should cost.”

Considering the way Amazon and Apple push their products, I sincerely hope to see Google or Asus offer this tablet in retail environments.  I understand that there’s next to no margin or room for profit, however Google needs to beat people over the head with this tablet.  This should not be one of those ad campaigns with AdSense/AdWords on websites or something is only talked about in online conversations.  Consumers need to see commercials for the Nexus 7 during prime-time television shows and sporting events.

While Android 4.1 is the most intuitive and feature-rich version of the platform yet, it’s still not something that your mother or uncle will figure out right away. There’s a day or two of playing around with Jelly Bean before someone might feel truly comfortable, whereas Amazon’s Kindle Fire excels at ease of use.   That said, this is the sexiest and most robust tablet experience we’ve played with to date.