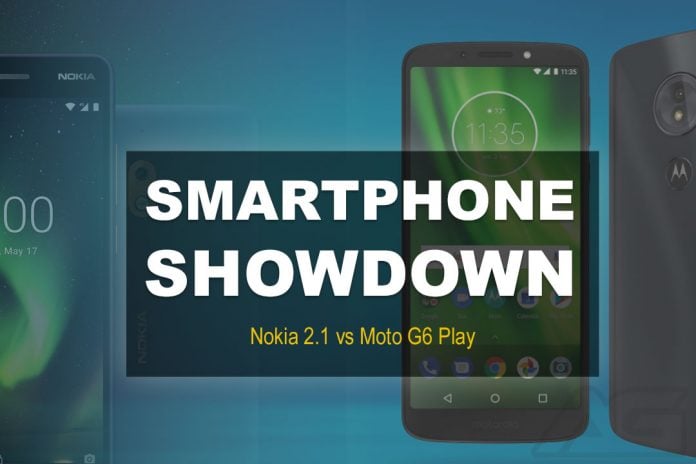 HMD Global unveiled the 2018 version of the Nokia 6 earlier this year and now it’s doing the same for its budget lineup. So say hello to the Nokia 2.1, Nokia 3.1 and the Nokia 5.1, which come with key updates to make them competitive in the second half of 2018.

The Nokia 2.1 is part of the Android Go initiative and includes a big-battery, which will certainly make it attractive to customers on the budget.

But HMD is not the only one who recently unveiled an affordable big-battery phone. Motorola launched the Moto G6 Play not so long ago. S which one is the better alternative? Keep reading to find out.

The Nokia 2.1 comes with a polycarbonate design that is largely identical to last year’s model. It also includes a more spacious 5.5-inch IPS LCD display (upgraded from 5-inch) with 720p resolution. You get the standard 16:9 aspect ratio here.

Now, if you want the modern 18:9 tall and lean design, you will have to opt for the Moto G6 Play, which is made of a shiny plastic resin.  The handset offers a 5.7-inch IPS LCD display with 720 x 1440 resolution.

Unlike the Nokia 2.1, the Moto G6 Play also has a fingerprint scanner mounted on the back and has a water-repellent coating that protects the phone from accidental splashes.

This year HMD has upgraded the Nokia 2.1 to a more current Snapdragon 425 processor. This is a quad-core processor clocked at 1.4GHz.

The phone ships out with 1GB of RAM and 8GB of expandable storage (up to 128GB), but luckily HMD has decided to adopt Android Go for the Nokia 2.1. So besides a slimmed-down OS, you’ll also get special lite versions of Google’s major apps installed by default including Gmail, Assistant and YouTube. This means you should have more free storage.

Both phones are on par when it comes to battery, their major highlight. It’s a 4,000 mAh unit that should be able to offer an extensive battery life.

The Moto G6 Play launched with Android 8.0 Oreo on board, while the Nokia 2.1 ships with Android 8.1 Oreo (Go Edition). Nokia promises the phone will get timely updates, as part of the Android Go initiative. But Motorola is also known for offering pretty fast updates.

The Moto G6 Play has Dolby Audio, while the Nokia 2.1 comes with front-facing stereo speakers. Both include a 3.5mm headphone jack.

The Nokia 2.1 is pretty basic when it comes to photography. It bundles an 8-megapixel rear-facing camera with autofocus and LED flash. On the front, it has a 5-megapixel selfie snapper. While unimpressive, the two cameras will be able to get the job done when needed.

The Moto G6 Play does a little bit better in this department, as it employs the services of a primary 13-megapixel camera with f/2.0, PDAF and LED flash. An 8-megapixel self-portrait camera resides on the front.

The difference in pricing is meager, but the Moto G6 Play has an 18:9 aspect ratio display, fingerprint scanner, more RAM and storage and better cameras. On the other side of the coin, the Nokia 2.1 runs a light-weight version of Android and offers front-facing stereo speakers.