I have used Centrallo for the past few weeks to organize what I am expected to do for various organizations. It has helped me keep my projects separate and made sure that I completed them on time.

Centrallo is a great solution for a number of different problems. It can help you take those quick notes about things that you are likely to forget, you can organize projects, and you can organize your life. Now let’s look into where Centrallo shines and where it falls short. Here is a look into why Centrallo will remain installed on all of my devices after this review is finished.

I am as scatterbrained as they come. I can forget things two seconds after they occur. With Centrallo, I can quickly type up notes about things that need to be remembered. It works great as a note taking app.

While it takes a while to get it set up, after you have a few entries under your belt, note taking becomes quick and simple. The quick add feature is perfect for this type of usage. It allows you to make a text entry, set a reminder, save a photo, make a voice note and more! Great for the forgetful types such as myself.

Probably the best feature a developer can provide for their app is support. In the time that I first reviewed their beta to their initial public release, a lot of additional features have been added and a lot of my gripes have been fixed. You will notice update tags after a lot of the points that I make in this post. Those are all things that the development team at Centrallo added or fixed after the initial review after they were brought to their attention.

The dark theme can be a bit much. It is dark and I personally feel it slightly depressing. At the time of this review, there is an option in the settings to change the background color, but you can’t actually change the color just yet. Centrallo has assured me that there will be additional themes added into the app, so that is something to look forward to.

Update: A lighter theme has been added in the settings. It looks just as clean as the dark theme, but with a white background base.

While the app is running great on my Moto X, I could not install it on my Nexus 7. The reason for this is that I am running the Android L developer preview. The current beta that I am using does not support Android L currently, but I was told that Android L support will be coming shortly and will definitely be ready when Android L hits full release.

Update: Android L is now supported, however, my untrained eye did not see any material design elements just yet. Hopefully those are still to come!

There are many good things to look forward to in the Centrallo app release, but there are also some things that could be improved. It is a long list, but they are very minor inconveniences that are quickly remedied.

Tips are too bloated. While it is great for starting off, there is just too much to go through. It shows off the lists in lists feature quite nicely, but it takes too much time to go through them all. It would be better if they were to just create a tutorial that pops up in the first running of the app along with an option to run through the tutorial again in the settings if it is required. This would make learning how to use the app less of a pain and get users off to a quicker start.

This leads into my next quarrel. Storage restrictions. The initial restriction makes sense. 100MB for a lightweight user free with an option to purchase more storage space for about $5 a month. However, the premium subscription only gets you 1GB of storage. There is no option for unlimited storage. Even though that I have not used even 1MB of my 100, this still doesn’t make sense to me. There will always be that heavy user that uses way more space then one would ever think possible. The premium subscription should get you unlimited storage. If I can’t touch my 100MB, then it is doubtful Centrallo will lose much by letting people have unlimited storage verses the 1GB limit.

My last bone to pick is with the user interface. The ui is clean and works well after you have played with it for a good amount of time. It takes a bit of fiddling to figure out how everything works and during that learning process, I lost a good number of my lists. Again, this is where a tutorial in the first boot up of the app would come in handy.

The app has its faults, but I believe that it can be made perfect (for my usage) with a few additional features. In my opinion, these features should be already implemented. Keep in mind that I am using a beta release, so that these features might actually be in development and could be present in the final release.

Hyperlinks. Centrallo has added a very helpful feature where you can share links from your web browser to Centrallo to save the link as a listing in the app. A quick note to remember a site that will be useful later on, but not enough to bookmark it. The only thing missing is hyperlinks. You can’t just tap the link to open up your web browser. You have to manually copy the link and paste it into your browser of choice. This is an unneeded annoyance and time waster.

Another issue is the sharing feature. While you can share individual items, the recipient has to have a Centrallo account or will have to create one to receive the shared item. There should be a function where you can share whatever is saved in that particular note through text, email or social networking. An additional feature that would be great is if you could send an entire list of lists instead of the individual item through the same manner.

Update: Lists can now be shared

Centrallo is a great concept and a great app. It is important to remember that I am using a beta release, so it is not a completed product just yet. The app and service has great potential and will be a great benefit to users who need something to organize their lives. The world is a busy place and I plan on using Centrallo to help me manage my workings in this busy world. 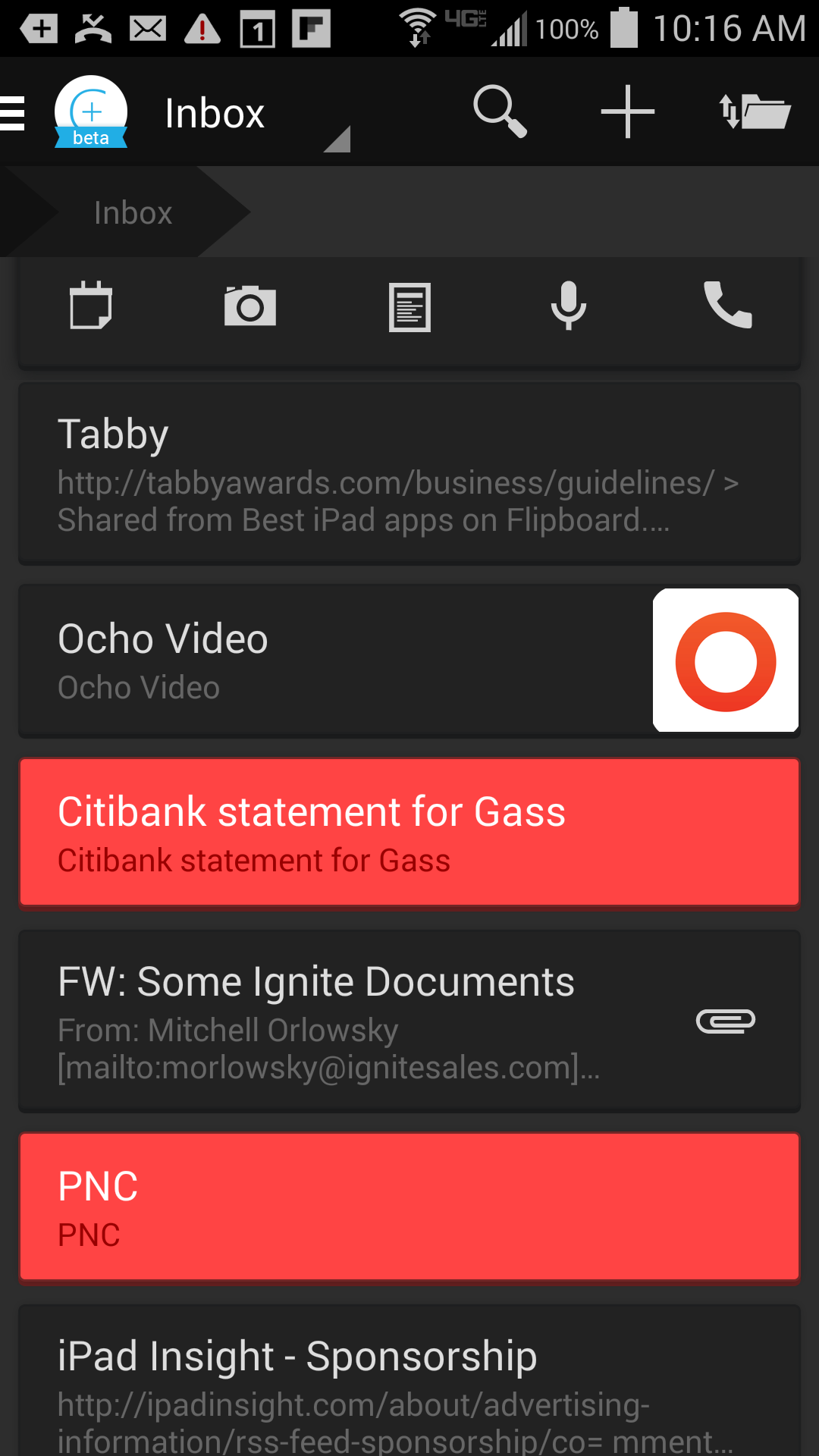 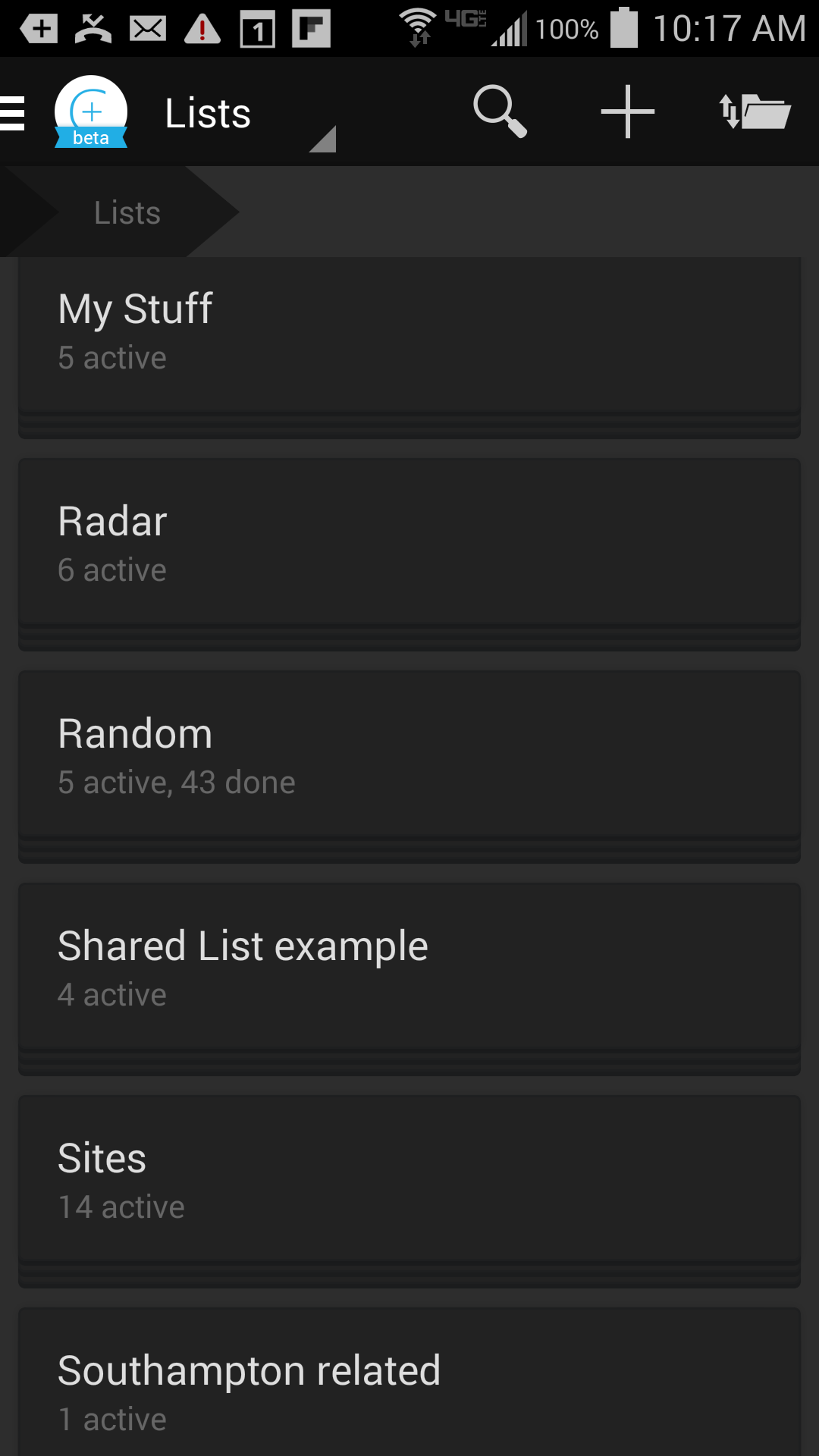 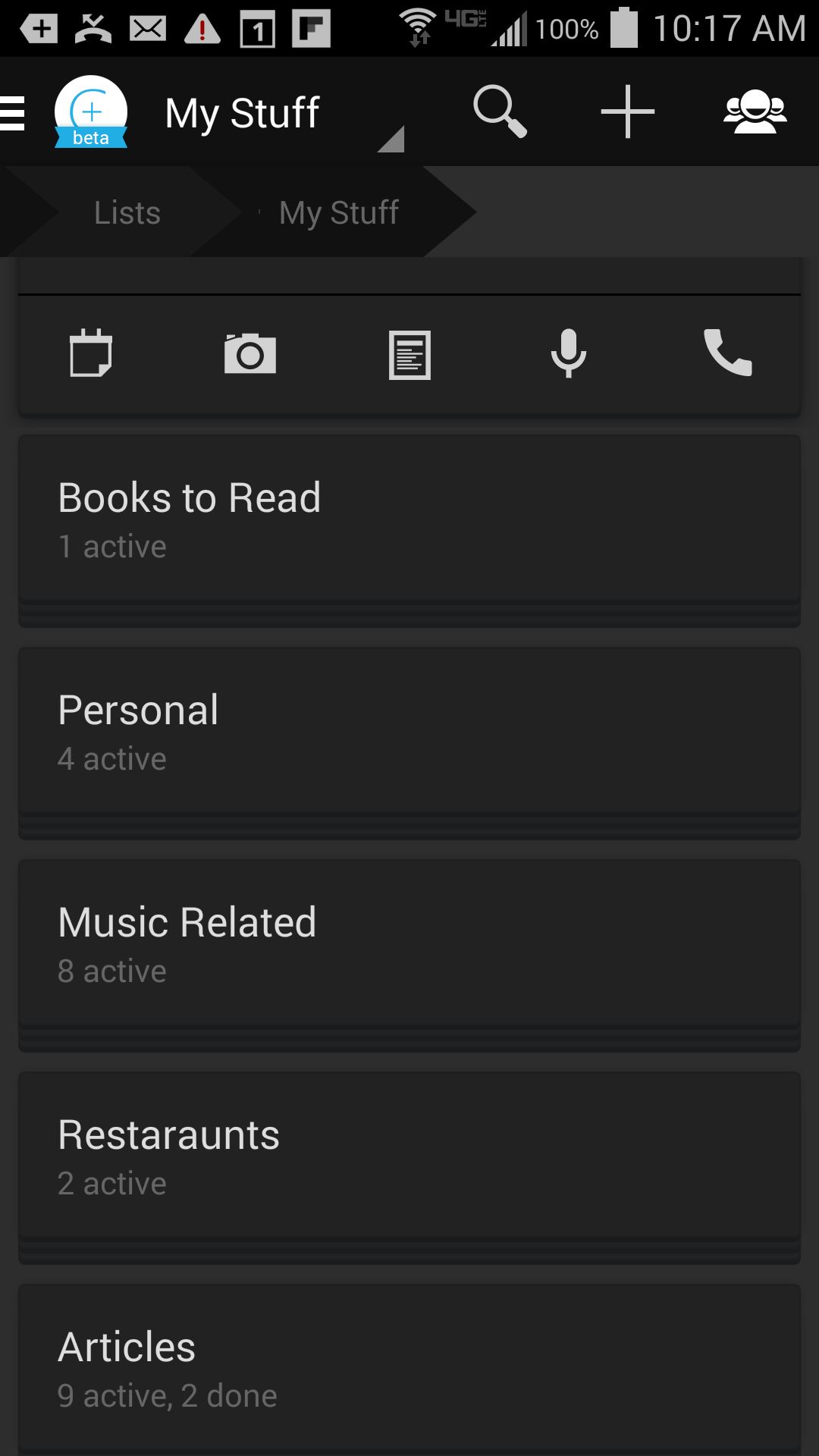 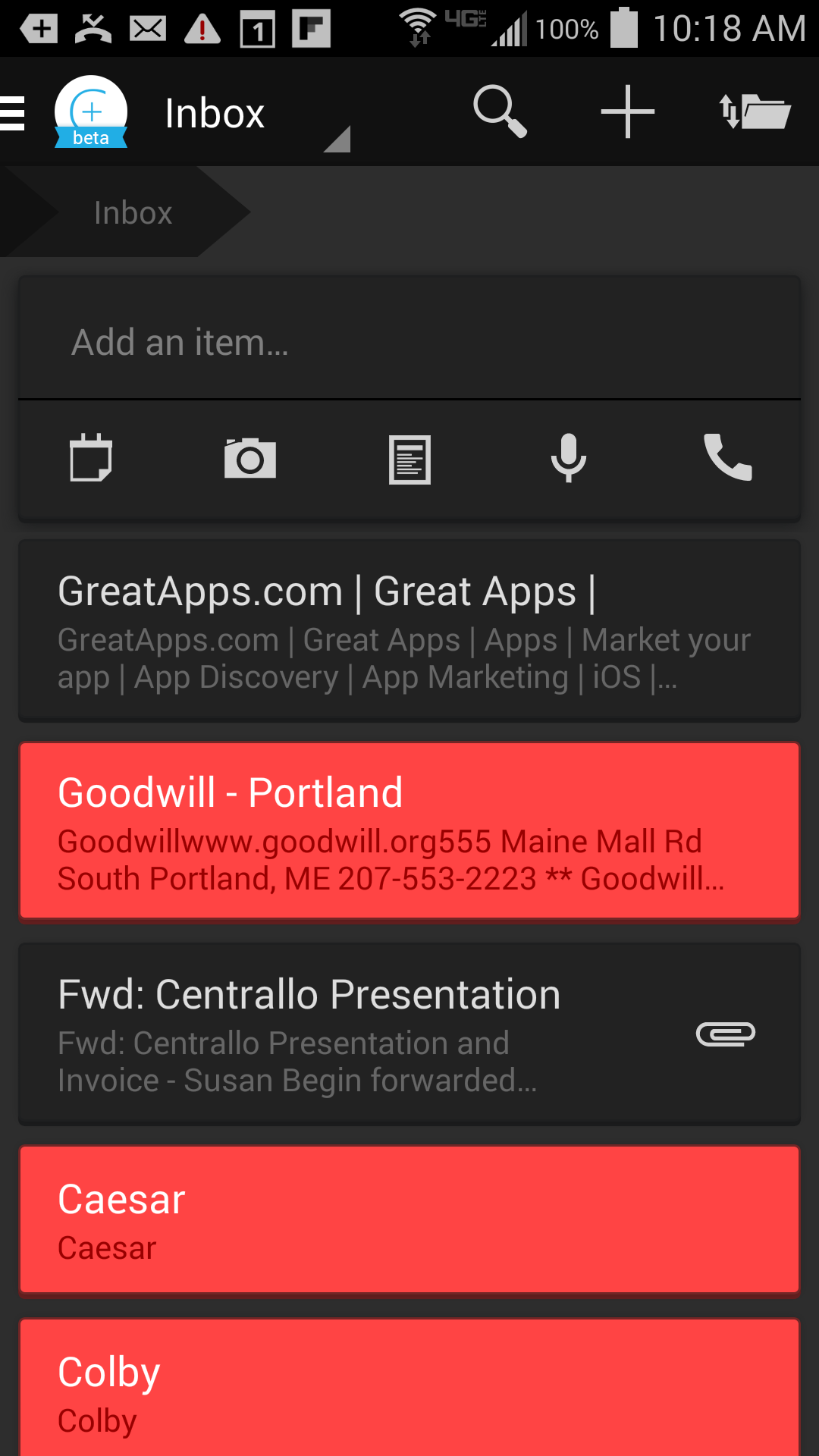 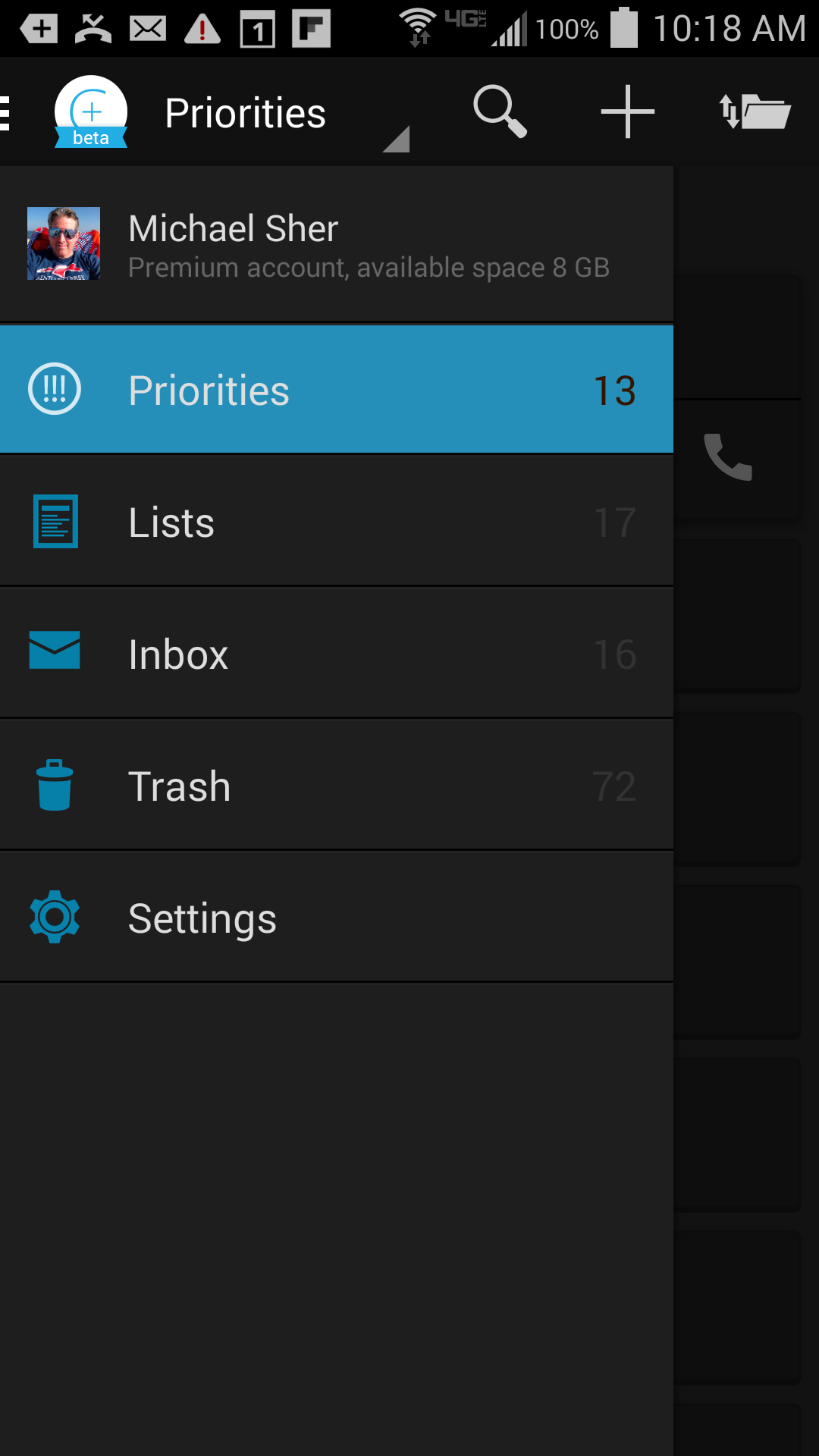