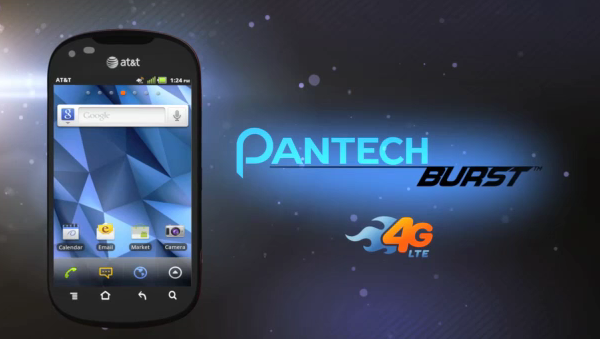 What we liked: At $50 with a two-year service agreement, the Pantech Burst is a wonderful 4G LTE value.  The screen sharp and the internals are better than expected.
Room for Improvement: Battery life is pretty average at best and the camera autofocus leaves much to be desired. Speakerphone is either tinny or slightly muffled, depending on volume levels.
Review at a Glance:  For the price, we love the Pantech Burst.  Considering the hardware, we would expect AT&T to ask for at least $50 more for the handset. Not that we’re complaining. Thanks to sharp color options and slight personalizations, the phone doesn’t feel cheap or look generic.

When Pantech and AT&T announced the Pantech Burst at CES a few weeks back, we were skeptical at what might be in store for consumers.  Priced at only $50 (with a two-year agreement), we didn’t think it would be much of a handset once we got our hands on it.  Well, I’m glad to say that I was wrong and that the Pantech Burst is worth every penny.

Specs are admirable here and even beat most of the current crop of Android smartphones.  Details include a 1.5GHz dual-core CPU, 4-inch Super AMOLED display, a 5-megapixel camera, and 4G LTE support.  Powered by Android 2.3 Gingerbread, the phone looks as nice most smartphones, even if it’s a generally uninspired form factor.  Color is sharp (Ruby Red) and the black accents give it a touch of class; the phone certainly doesn’t look cheap. The Pantech Burst fits nicely in the hand and feels neither overly heavy or light.

Powering on the smartphone, the 4-inch Super AMOLED display grabs your attention with its contrast, brightness, and clarity.  If you’ve ever experienced a Super AMOLED on a Samsung handset then you’re already familiar with the quality we’re dealing with here.

The lock screen is slightly different from most other handsets and hardware makers and includes six icons that you drag into the center circle.  Much like HTC introduced with Sense a year back, you have instant access to phone, email, music, and others.  If there were one recommendation I could give it would be to include the camera instead of something else.  The notification drop-down shade gives you quick settings for some of your more common stuff such as Wi-Fi and Bluetooth.

The Pantech Burst comes loaded with a number of applications such as AT&T’s Navigator, Amazon Kindle, Qite Lite, and RSS reader, Yellow Pages Mobile  and more.  Not the worst set of bloatware we’ve encountered but it’s not full of value either.  Of course you also get your Google apps like YouTube, Gmail, Talk, Android Market and other familiar titles.

The backside of the Pantech Burst features a 5-megapixel camera while the front offers a 2-megapixel camera.  Like most Android handsets there are options for adjusting resolution, flash, white-balance, and others.  I liked some of the filters on the phone as it reminds me of Instagram and other third party apps.  Unremarkable and mostly average across the board, the phone works best in brighter light.  Indoors isn’t the worst, however, as even fluorescent lighting still looks decent in most cases.  My one major gripe about the camera is that it takes for ever to focus once you snap a photo.  If you are looking to capture a candid moment with babies, animals, or sports then you’ll likely come away with “after” shots that you have to explain.

Switching to video mode, the Pantech Burst records 720p HD while most of today’s top Android handsets record 1080p video.  I cannot complain much here because we’re not dealing with a $150-$200 phone.  Playback is crisp and looks great on the 4-inch display and the phone captures sound about as good as it does video.

Unfortunately no matter how good the Burst captures sound, the phone doesn’t do it justice when it comes to playing.  Speakerphone leaves much to be desired and is perhaps one area where the phone falls very short.  At high levels the sound is muffled and distorted and low levels are very hard to discern.  I love to listen to podcasts and audiobooks on my mobile devices so it looks like I will be using Bluetooth in this case.

Unfortunately we were not able to test the handset on AT&T’s 4G LTE network so we don’t have any speeds or benchmarks to share at this time.  Considering the network is just getting underway it may be some time before our neck of the woods is blanketed with the faster coverage. To that end, I would have a tough time selling this phone on the merits of 4G LTE connectivity alone.  Chances are good that you’ll not have 4G LTE in your market yet, however, that should not deter you from buying the Burst.  If you were to factor in everything else with the phone, it’s more than worth the $50 price tag.  Should you have support for 4G LTE in your city then consider that a bonus!

At 1,680mAh battery, the Burst is rated with battery life of 4.5 hours talk time and 10 days standby time.   We ran through the battery a couple of times and found that to be somewhat of an aspiration.  Even though we had not loaded many of our daily use apps, the phone died pretty quickly.  While it wasn’t the worst we’ve encountered, we’ll definitely consider a high capacity replacement down the road.  Looking at the competition, other models on the market are starting to come with 2,000mAh capacities which only makes this look worse.  If you’re coming from a feature phone and considering your first Android, be warned that the battery is not a selling point.

When you consider what you get for your money, the Pantech Burst is quite a deal.  We’ve come a long way from the days of all Android phones running $200 with a contract and this is a step in the right direction.  This might not be something you’ve replaced your current smartphone with but it’s more than enough for your friend’s first foray into Android.  Even though other companies such as Samsung and HTC have a chunk of the Android market space there is plenty of room and opportunity for others.  If Pantech is able to produce this type of handset and price on a regular basis then we might have a dark horse on our hands for 2012.

There’s just enough personality here to stand out from the gray slabs that we often see and the themes and UI touches are nice.  Whereas I previously looked at Pantech as a low-grade handset maker I will certainly give extra consideration to future Android endeavors.