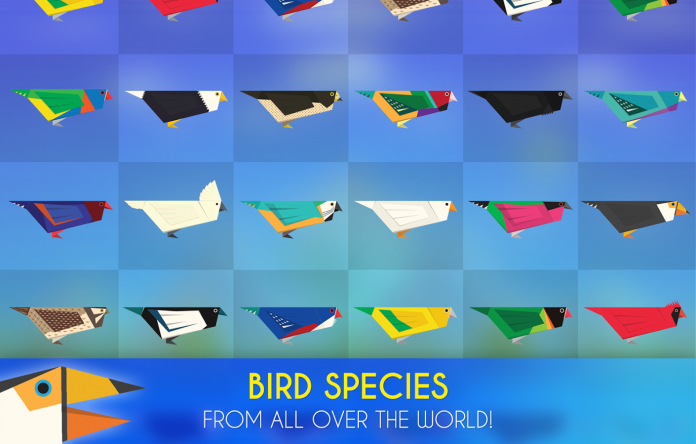 Paper Wings is a fast-paced arcade game about controlling a papercraft bird to collect coins in an endless run until you miss a coin or die to an obstacle. The difficulty ramps up quickly and the game is fun and has a nice conservationist message built in.

Paper Wings is a very simple concept on paper (pun intended), with only two buttons that turn your bird left and right to slide it about the screen. You need to rock up and down to facilitate speed and maintain altitude since the bird acts like a paper airplane. The difficulty comes mostly from the lack of control you have over your bird, with the only turning coming from looping around as you’re limited to moving in two directions. To further increase the difficulty, there are also hazards like tracking bombs that are fast and can almost be mistaken for coins.

You have the choice between a large number of real life birds from all over the world to play with, and each one has unique characteristics that change up the gameplay, such as magnets to pull coins or increased power-up times. The different birds all have little biographies about them and where they come from. The game also features a donate option to help support the American Bird Conservancy with donations, which is awesome in its own right.

I really like Paper Wings, from its cute papercraft visuals to its simple yet challenging gameplay. Its one of the few games I will probably keep on my phone, as I usually delete most of the games I review after I am finished with them. It’s the right mix of short burst play, fun, and polish that makes a mobile game worth playing for me. It’s a