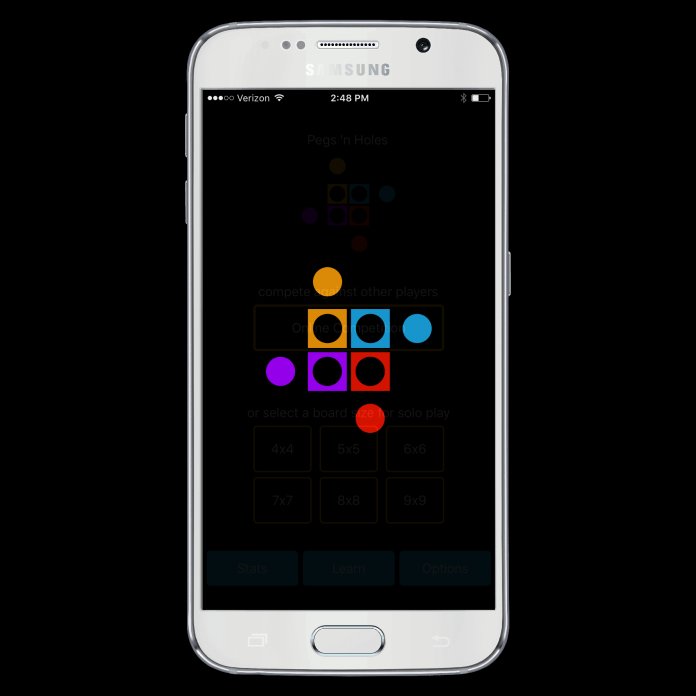 It’s amazing how a simple game can entertain us so easily. Let’s take Connect Four for example. The company I work for recently had a Connect Four tournament for all the employees. It was hilarious to see full-grown adults getting so hyped over watching two people try to line four circles in a row. I actually spent hours practicing with my roommate only to lose in the first round to my boss. If you’re reading this Beth, I’m taking you down next year.

Let me introduce you to Pegs ‘n Holes, another simple, yet addictive game that resembles a Connect Four board.

Pegs ‘n Holes is a logic-based puzzle game that involves matching the circles with the board’s holes in the correct sequence. Tapping the circle will slide it to the corresponding colored hole, eliminating it from the board. The goal is to match and eliminate all the holes in the board. 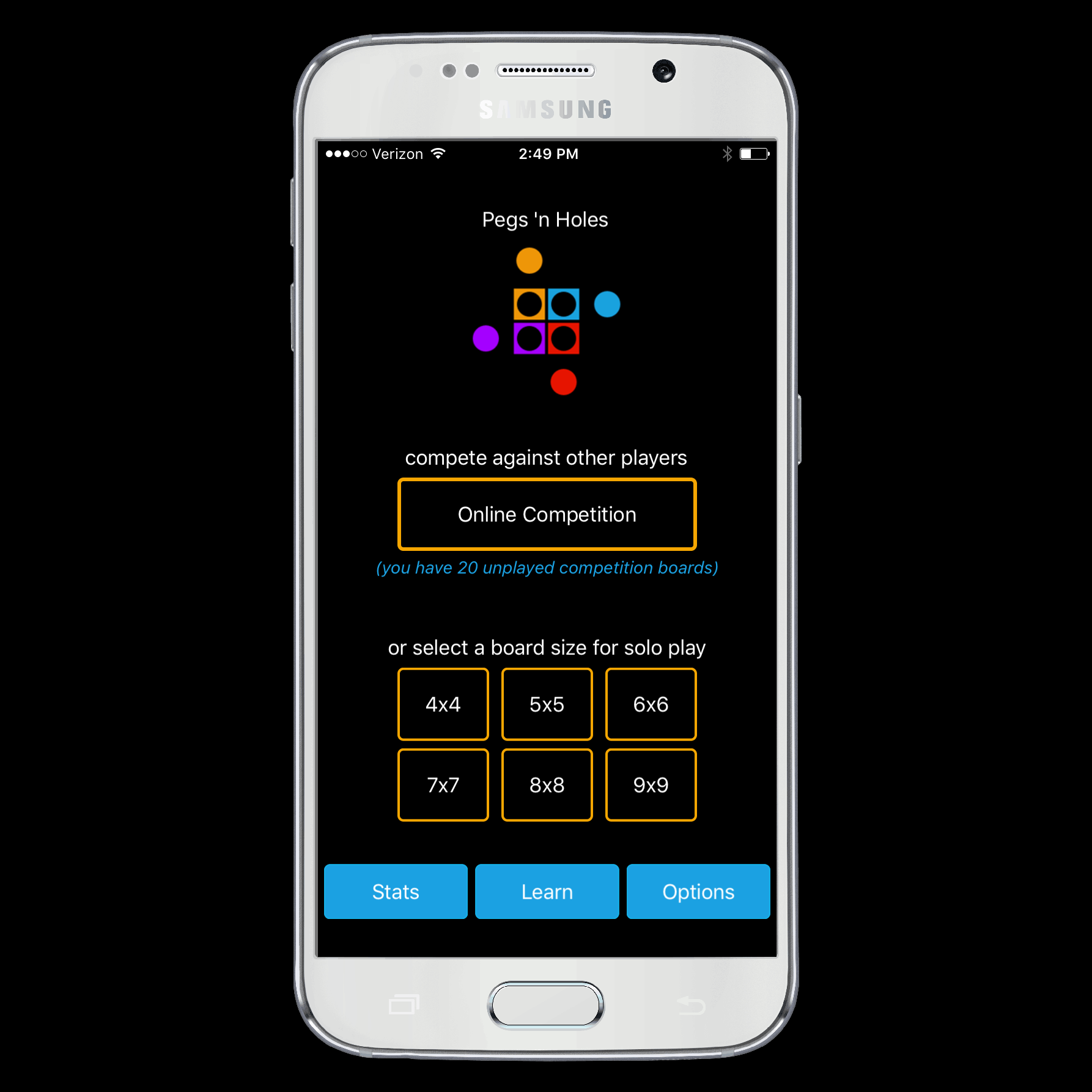 Finding the correct sequence is harder than you think. The game will only let you tap the circles that give you a potential move. The tricky part is that there are multiple circles that can potentially go into the hole that you want to clear. The concept is similar to Sudoku,
where numbers can go into multiple boxes, but only one box will complete the puzzle. Prepare yourself for the frustration you will encounter when you only have two boxes remaining with the wrong colored circles.

There is an undo and restart button during gameplay. The undo button comes in handy when you realize you’ve moved the wrong peg. You can undo as many times as you want and you will not be penalized for using it. There is also a colorblind mode option that uses shapes instead. 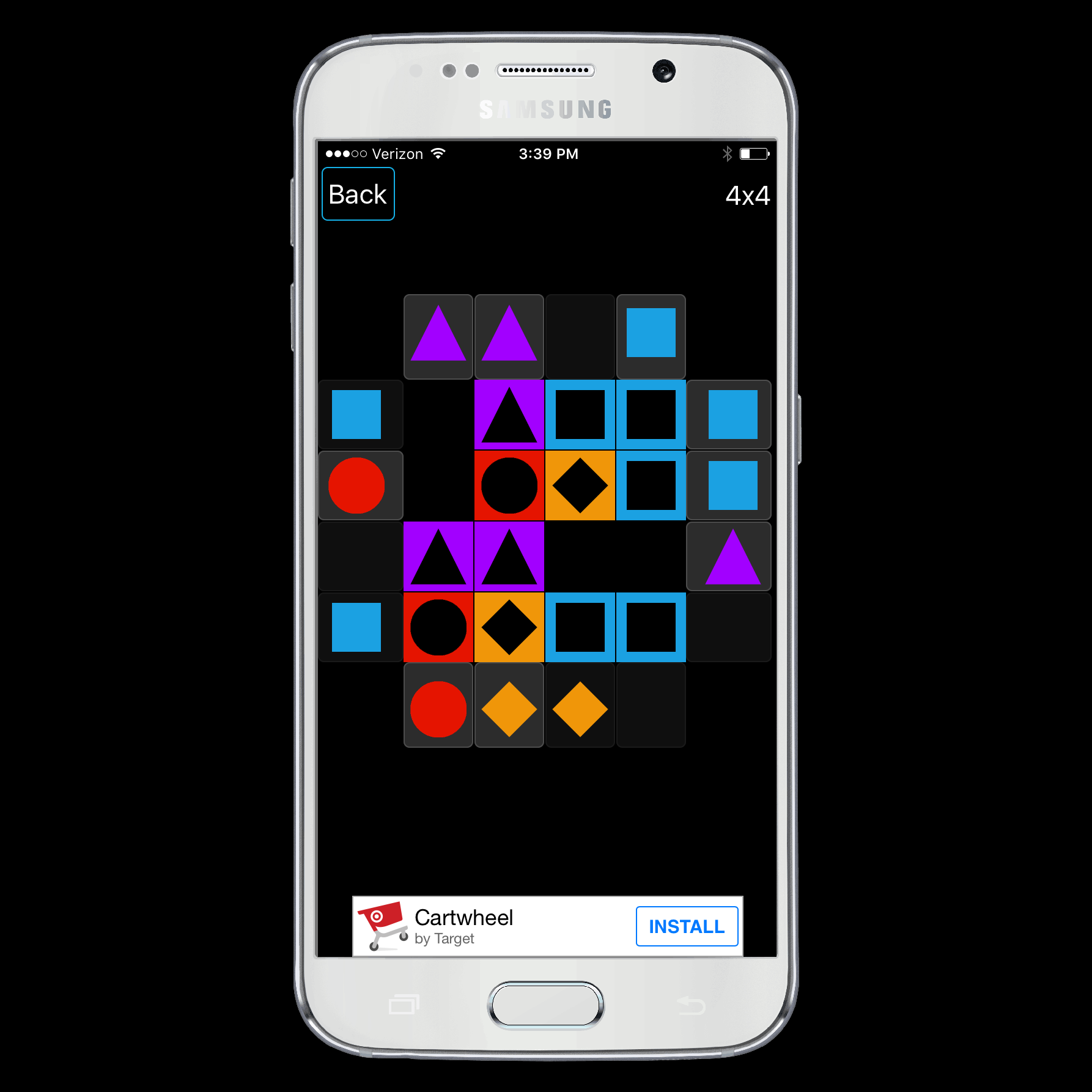 The game offers two modes: solo play and online competition. Solo play lets you choose different board sizes such as 4×4 up to 9×9. 4×4 will be for beginners, while 9×9 will be for those players with a lot of time to kill and need some mental stimulation.

The online competition mode features a 7×7 board, where your completed time will be ranked against other players. I have managed to get last place almost every time in this modes. Some of these times are obscenely fast. I average around 100 seconds for a 7×7 board. The top ranked players are finishing at around 16 seconds. 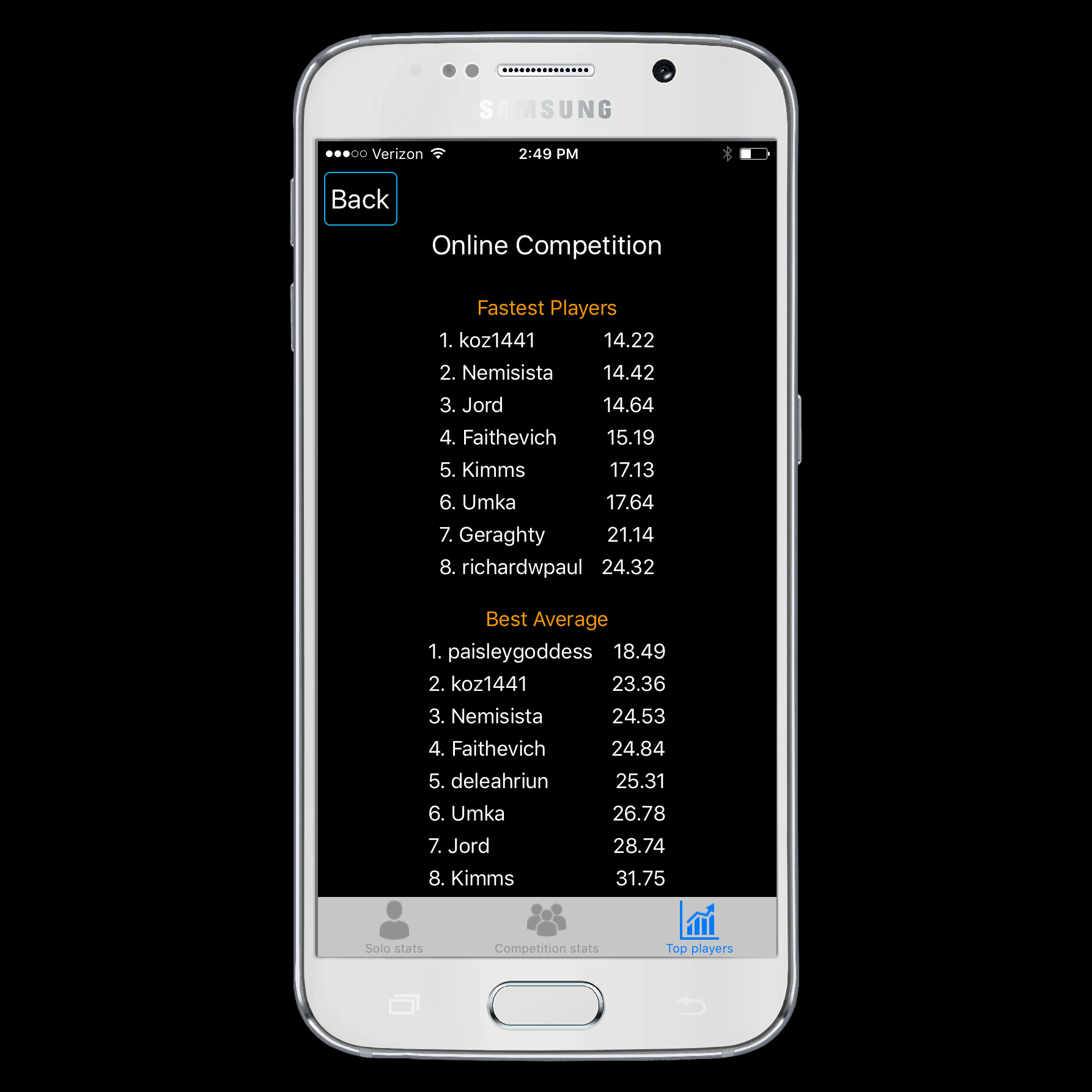 There is only one in-app purchase which is to pay $0.99 to remove ads at the bottom of your screen.

I really enjoy puzzles so it was no question that I had a great time playing Pegs ‘n Holes. The game is quite addicting and I found myself playing constantly. I really appreciated the simplicity of the game. You don’t have to invest much time to be entertained. The challenging levels were great exercise to keep my brain sharp.

The animations of the game were really smooth. Tapping the circle was quick and responsive. You can tap two circles at the same time to shave off key seconds. The only issue I had with the touch screen interface is that it became harder to tap the correct circles when the board grew bigger. I found myself tapping the wrong circle in the 9×9 mode frequently. This could be partly due to my fat fingers, but I can imagine users with smaller phones having an equally difficult time trying to tap those small pegs. 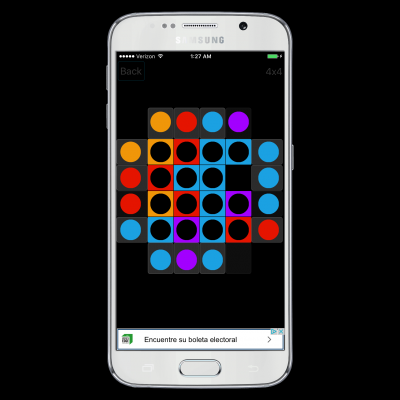 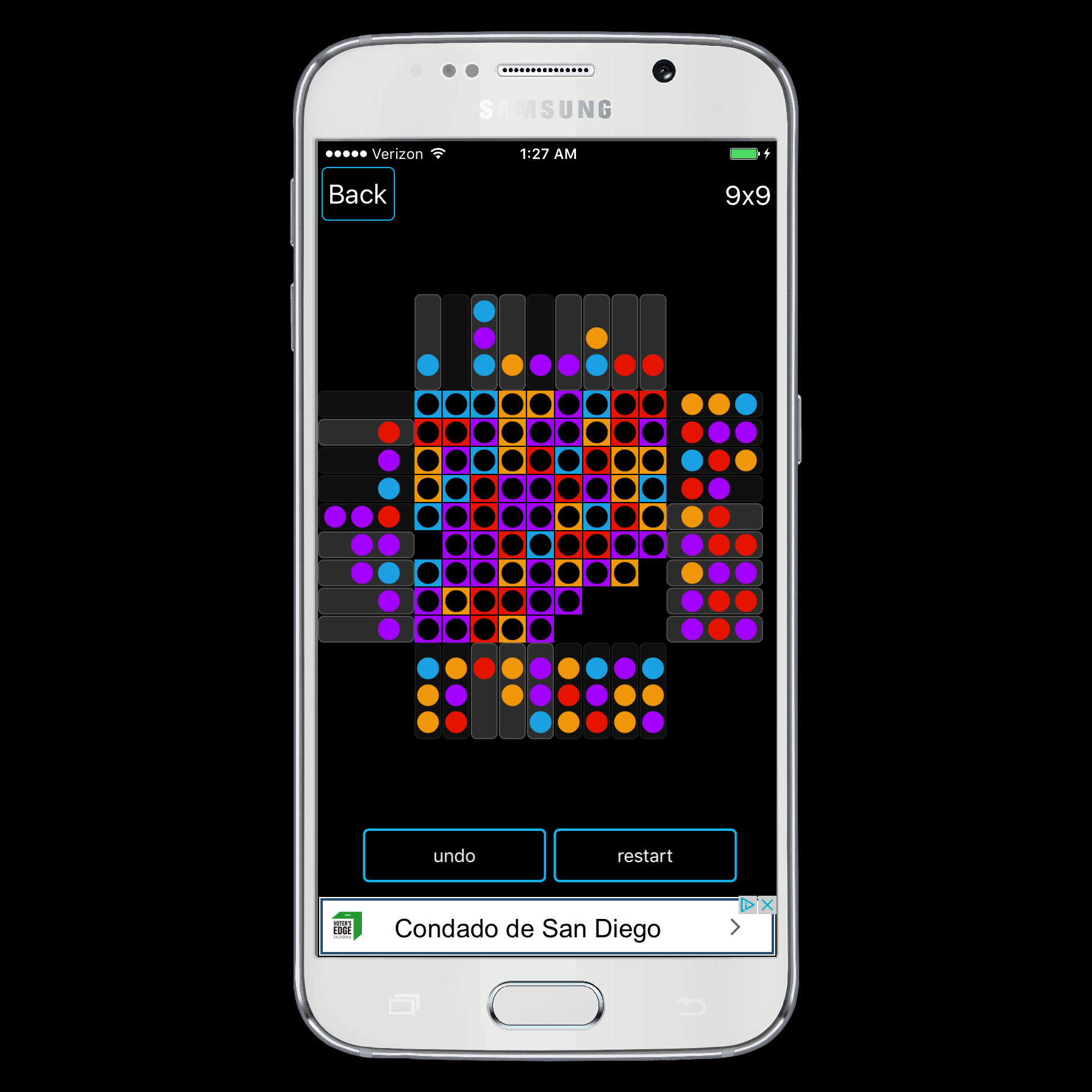 One more minor thing that bugged me was the restart button. There were numerous instances where I accidentally grazed over the restart button and ended up restarting the game right before I was about to win. This could easily be fixed by adding an “Are you sure you want to restart the game” option when the restart button is pressed.

It’s amazing how a simple game can keep people entertained for hours. This is the main reason why puzzle games will always have a spot in your phone.

Pegs ‘n Holes is a logic-based puzzle game that uses pegs to eliminate all the holes in the board. The two game modes gives you the freedom to play casually or competitively. This game is perfect for anybody who has a couple minutes to kill and wants to challenge their brain. With all mindless games in the app store, it’s nice to have an option that actually requires some thinking.