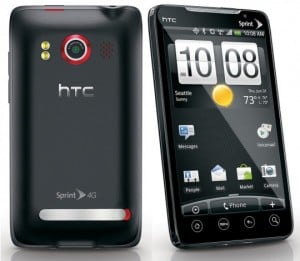 I’ll spare you guys a bunch of long-winded paragraphs and get right to the point.  The HTC EVO 4G is the best phone you can buy for your money right now.  Coupled with Sprint’s rate plans, there is really not much to even debate.  From the gorgeous, and massive screen to the speedy 1GHz processor, it easily bests my previous Android experiences.  I am not going to bore you with head-to-head match ups or specific test here.  There’s plenty of the detailed stuff to be found online already.  No, I will simply tell you about the things that stick out.  My gut tells me that you guys are a lot like me.  Your usage changes from day to day and you just want to know the big picture.

Let me start with the size of the phone.  At 4.3-inches, it’s not exactly a tiny device.  Yes, I throw it in my front pocket and carry it around in the same manner as my long forgotten G1.  Yes, I also worry like crazy that something is going to stab me in the leg and break the display.  It may not be the Super AMOLED of the Samsung Galaxy S but it’s the first thing anyone notices whenever I show them the phone.  It’s almost laughable when I show my Cliq XT next to it.  However, the EVO 4G is every bit as thin as my Cliq XT and doesn’t feel much different in my pocket.

The screen, and four buttons are very accurate and responsive.  I’ve not run into any issues where they don’t recognize my touch and the cursor always ends up right where I want it.  Thanks to its size, typing is a breeze.  When going back through emails and texts, I can get right where I need to or want to.  Whether in portrait or landscape mode, pounding out an email is almost effortless.

I’m sure you’ve seen enough pictures of the phone to know that the top is where the 3.5mm headphone jack is while the bottom has the micro-USB and micro-HMDI port.  Unfortunately, Sprint and HTC opted to leave out a micro-HDMI cable so I cannot give you a detailed account of personal experience.  I can say this though – what I saw at CTIA (Prince of Persia trailer) looked amazing.  There was nary a stutter to be found and the image was as good as anything I’ve watched in HD.

The 8-megapixel camera that comes with the EVO 4G has replaced the Nikon my wife and I often carry around.  It’s nice to have a camera phone that opens up the app quickly and snaps pictures immediately.  Yeah, I am staring at at you, G1. As for the front-facing camera, it’s more than adequate for those of you who want to snap of some Facebook pictures.  If you’re into cutting-edge, Jetsons-like things such as video calling, I think you’ll be more than pleased with its quality.  NOTE: The pictures you see above were untouched and taken in real-world conditions.  Real-world meaning, “Hey let me get a picture of that really quick!”

Okay, let’s talk a little bit about the battery. As many of you may have read elsewhere, it’s a sticky point.  As I said above, I did not do any hard tests or face off comparisons but I can share this.  You will want to keep a charger on hand, either for your PC (micro-USB) or in the car.  If you are coming from a previous Android phone, you already know how this goes.  The EVO 4G, like others, is capable of doing many things at once and handling multiple background applications.  You have to understand that if your twitter and Facebook apps are running updates every five minutes that it’s going to tax your 1500mAh battery.  Plus, the 4.3-inch screen makes it awfully hard not to watch YouTube or play games.  Longer-term web browsing, games, and GPS activity are going to wear you down if you’re not careful.  Of course all of you  know this already.  Battery life is probably most noticeable to former BlackBerry or iPhone users.  I will end it with this – considering the screen size and multimedia capabilities of the phone, I don’t expect more out of it.  Would I like more?  Of course.  Just get yourself into good habits like turning off Bluetooth and WiFi and you’ll be alright.

This phone, like the Droid Incredible before it, really give HTC’s custom user interface the power it needs.  The 1GHz processor and memory is more than adequate to keep my seven screens full of widgets and shortcuts.  The FriendStream, Calendar, and other HTC widgets look amazing on the phone and really get a chance to shine.  I wanted to wait a few weeks before I could definitively say this but it handles everything I throw at it.  After getting past the first impression of ‘Wow!  It’s so fast!” I wanted to load the phone with apps and put it through real world usage.  I am happy to say that my EVO 4G has more apps on it than my Cliq XT and G1 combined and it shows no signs of struggle.

I wish I could share my experiences with 4G with you guys but I live in an area that likely won’t see it for another year.  I suggest checking around for other reviews from people who actually have tried the service.  As for the mobile WiFi sharing, it’s super easy to use and the feature works great.  My first experience came in San Francisco when I watched LOST over my netbook using the 3G network.  After an initial stutter and buffering snag, I was able to enjoy the full episode without interruption.

I do have a somewhat minor gripe in the way the microSD card is handled.  You must power the phone off and remove the battery each time you want to replace the card.  Like I said, trivial.  If you throw a 16GB or 32GB card in there you should be okay.  If you are one of those people who go back and forth between multiple 2GB cards then you are going to get tired of that quickly.

Call quality is nothing remarkable in that I never thought about it.  The speaker and input were plenty loud and the network provided a clear conversation every time.  There were no issues in dropped calls or clarity but that’s more of a network discussion anyhow.

In terms of Android, there’s nothing else out there that another phone has over the EVO 4G.  As I mentioned at the beginning this phone and the accompanying Sprint rate plans make it not only the best Android phone out there, but possibly the best combination in the industry.  Looking beyond next week’s WWDC and Apple’s big iPhone announcement, I am hard pressed to imagine anything better in the near future.