The Kyocera Hydro XTRM is a 4G LTE, the company’s first GSM HSPA/LTE capable Android powered handset with an IP57 Rating against water and dust. This device is available in the United States (see: U.S. Cellular), on the T-Mobile Business and MetroPCS networks. Maybe it’s just me but I feel the Samsung Galaxy S5 Active borrows a few design cues from the Kyocera Hydro XTRM; however, stylistically this is pretty standard with durable devices these days.

The XTRM features a standard dark panel around the display with average bezels around the sides. The top and bottom, however, have quite a bit more bezel, providing less of a screen-to-device ratio than we would have preferred.

Around the sides, there is a thick border trim that almost feels like a bit of a metal border. On the rear of the device, you’ll have a removable “micro diamond-cut” plastic battery door with an O-ring seal to protect against water.

There’s a 2000mAh removable battery packed in, with microSIM and microSD card support. The dual-core Qualcomm Snapdragon S4 Plus SoC (MSM8960) powered at 1.2GHz runs the device with 1GB RAM, and allows for basic/standard smartphone. It, of course, also comes with your basic GPS, WiFi, Bluetooth, etc. Memory will be 4GB, with only 1GB user available, however storage can be expanded via a MicroSD card up to 32GB.

With a color plastic overlaid TFT LCD display and 480 x 800 resolution, the 4-inch display isn’t wonderful but gets the job done without looking bad or vastly hindering visibility. It’s worth noting that this unit feels much smaller in hand as compared to other smartphones on the market. 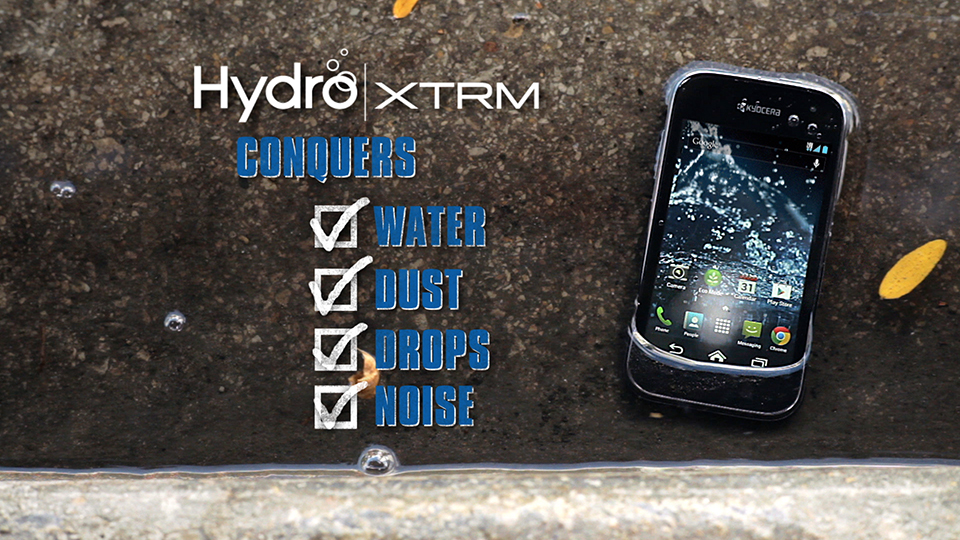 The Hydro XTRM can sit under water (~1m deep) for up to 30 minutes and is dust and shock resistant. In other words, you’ll be better protected against accidental damage than with most other devices. To be extra safe, it is always best to ensure that the battery door with the water-seal is fully and securely tight and sealed before getting this phone anywhere near water. This smartphone does not have any of those potentially annoying MicroUSB or headset port covers, yet manages to be water resistant.

We’ve dunked this phone in water, dropped it here and there, ran water directly over the device and much more; the Hydro XTRM was not phased by any of our bad behavior. It’s able to take life’s spills without problems, but do remember the phone should not be used regularly underwater and should be dried immediately after getting wet of course.

Audio quality was surprisingly pleasing with this device. Our test calls proved to be loud and crisp, which we expected as many users will be using this phone around construction or loud noise areas. The area where we were most impressed by was the speaker/speakerphone volume which was loud but not as quite crisp as the earpiece.

This smartphone runs Android 4.1.2 Jelly Bean out of the box. While certainly not the latest, it definitely runs just fine and is compatible with most everything found on the Google Play Store. There is, of course, a small  downside to not having Android 4.4 KitKat. Specifically, we’re referring to usage of resources and security improvements. Hopefully we’ll see an update at some point for this model.

Kyocera has a bit of a funky skin running over 4.1; frankly, it reminds me of Android 2.3 manufacturer overlays (with a 4.1 hybrid style). Simplicity was kept in mind, while keeping the best features of Jelly Bean.

Battery Life is tricky with this phone, averaging at around 5-6hrs with light usage with data on. Strangely, on some days with heavier usage we received around 10-14hours, or the polar opposite of 3-6hrs. Sadly, it was pretty inconsistent in our testing. It is worth mentioning that the coverage area during testing was being upgraded on T-Mobile which may have contributed to the fluctuation in consistency. The phone does features a Battery ‘MaxiMZR’ similar to other Power Saving modes with other devices, something we have yet to see in stock Android in even the latest versions as of the publish of this article.

This device did take a bit of getting used to as a daily driver during our testing period as we came from a higher powered smartphone. Indeed, we noticed the differences after using something more robust. Average, and first time buyers, though, may not see any visible lag or under-performance. Kyocera sticks to what’s important for industrial users and the more accident prone customer. If you are looking for the latest and greatest (with or without element resisting features), this device is most certainly not for you.

The Hydro XTRM is a great choice for those needing a basic and durable Android smartphone that can handle the elements. Summarily, it’s a decent 4G LTE handset with essential functions and few extra gimmicks.

Whether you need this as a basic device, backup, or nearly weatherproof phone, check out the XTRM. U.S. Cellular has recently discontinued this model however you can find the Kyocera Hydro XTRM at T-Mobile Business (pricing varies) and for $79.99 at MetroPCS.