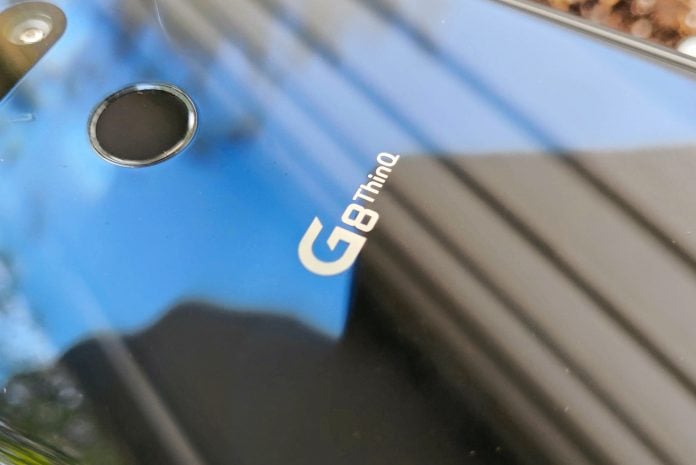 LG is back again with another iteration of its “G” series, with this year seeing the launch of the G8 ThinQ, the company’s early year flagship. Going head to head against the Samsung Galaxy S10, the G8 feels familiar for anyone who has picked up an LG device in the past couple of years. An iterative design, same-y software and small improvements leave us wondering if this one is worth the upgrade if you’re currently using the LG G6 or G7. 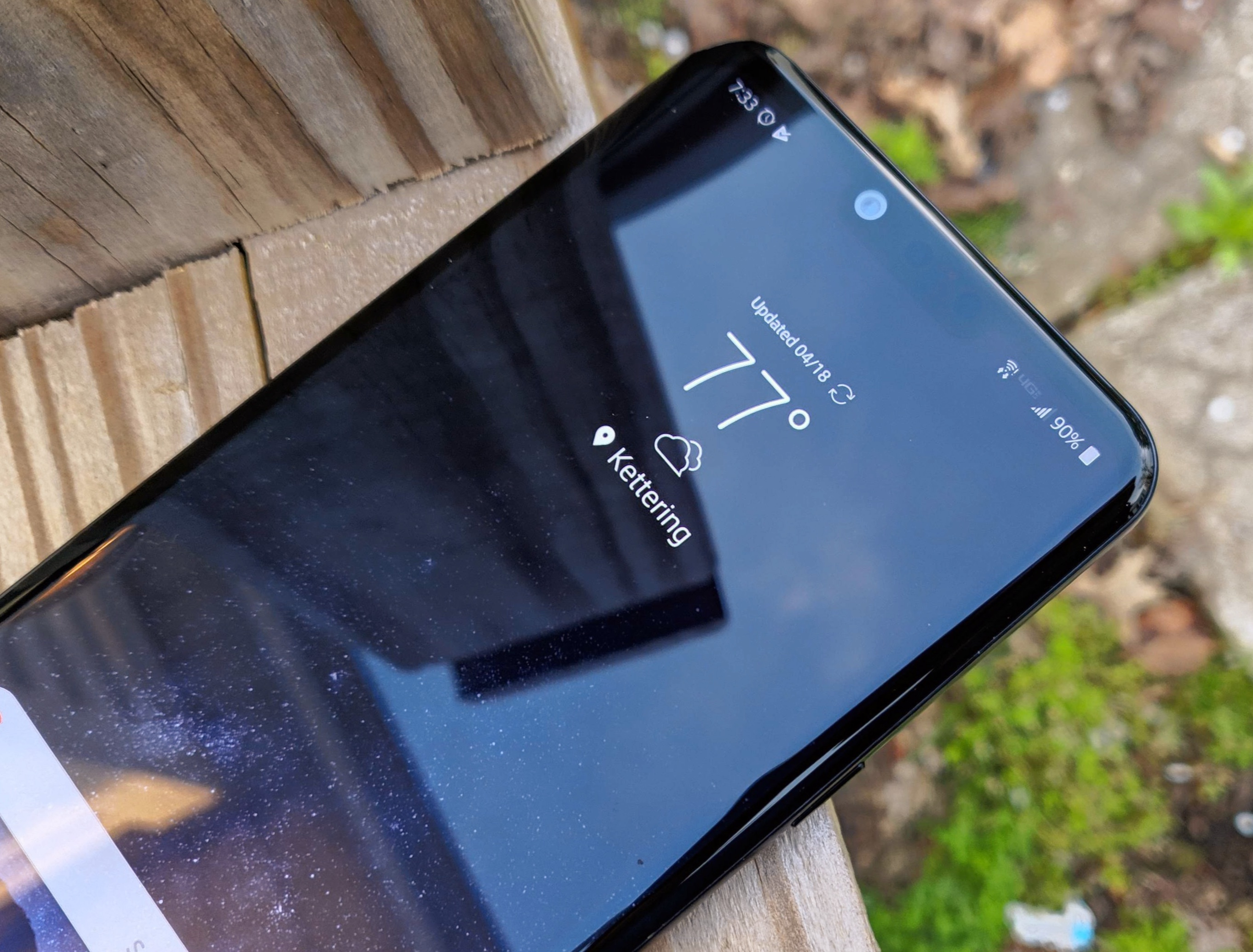 LG has long been known to make great hardware who sits a step behind the market leaders of Samsung and Apple. That hasn’t changed here.

The LG G8 is a joy to use and feels very comfortable in the hand. It’s one of the few phones with a very large display that doesn’t hurt my hand in usage and I appreciate that. That’s not to say that there aren’t bezels here because there are, but LG just knows ergonomics. The rounded corners and sides of the device never feel out of place.

That being said, I’ve seen some hate directed toward Samsung for not innovating on its current hardware design over several years. Well, what’s good for the goose is good for the gander.

LG largely uses the same body as the LG G6 (2017) which means we have no hope of a noteworthy hardware refresh until at least 2020. I’m not saying LG needs to change it up but in the world of mobile, going multiple years with the same body style can hurt sales as consumers might assume there’s no overt reason to upgrade.

Personally, I really enjoy LG’s design and the G8 fits perfectly into my palm. I hope LG continues down this path because the G series has always been one of my favorites, largely due to the industrial design. The curved 2.5D glass of the display melts into the frame of the body and the flat sides make the phone easy to handle despite being one of the most slippery devices out there. 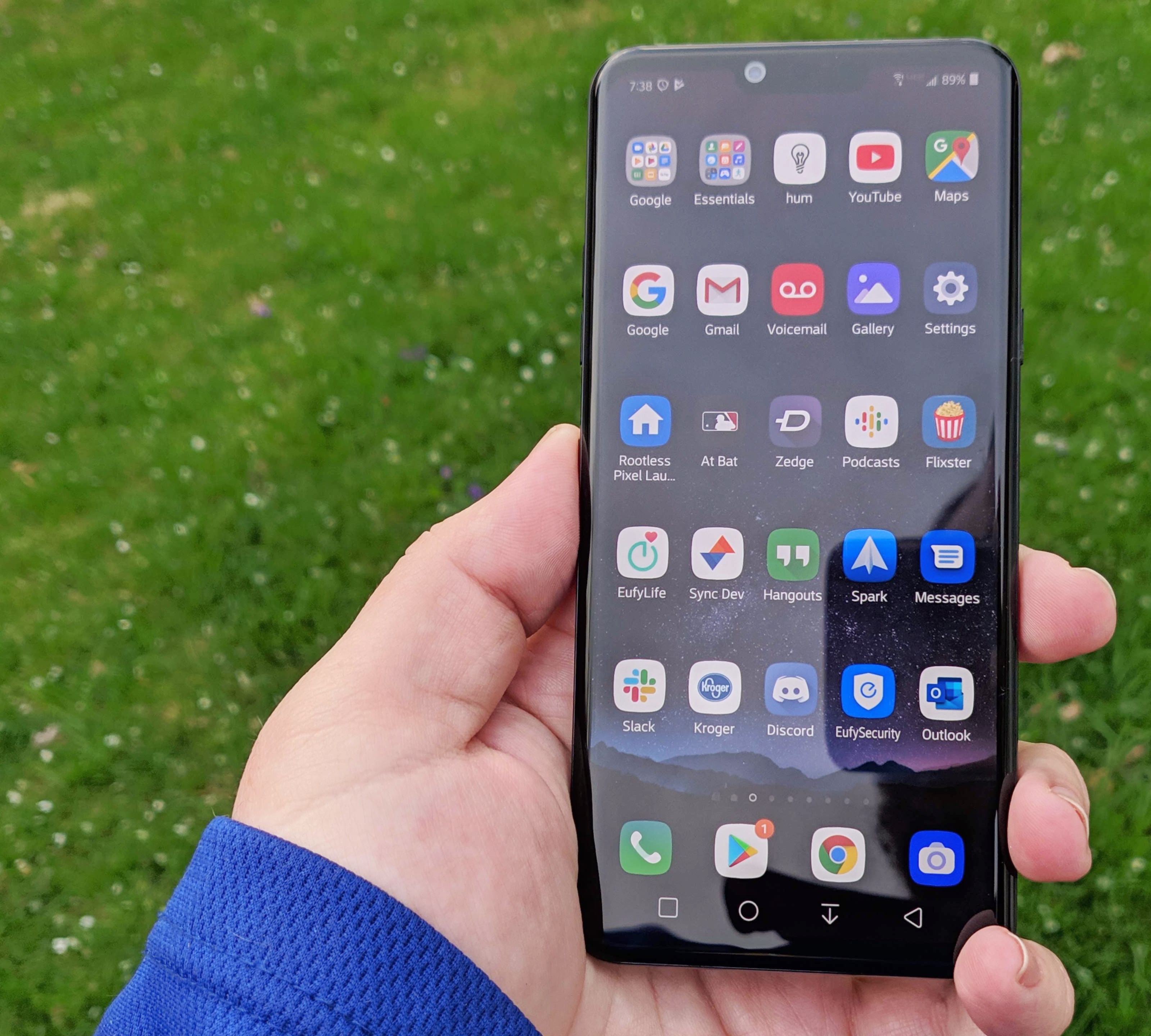 The G series makes the switch from IPS LCD to OLED display this year, something once reserved for the more expensive V family. Customers are really in for a treat here as LG has come a far way in figuring out mobile displays. Things have changed quite a bit since the disaster where early Google Pixel 2 XL units had LG taking it on the chin over lack of quality and terrible black levels.

The experience is totally different here. LG’s displays might be slightly behind Samsung’s still but that’s with the benefit of holding the two displays side-by-side. I don’t think you’re going to walk out of a carrier store with your new phone and be disappointed at all. In fact, I think you’ll love it.

Blacks are inky as you’d expect for an OLED display and colors seem to pop. I don’t run any kind of color tests because I feel that’s not true to a consumer experience but I can tell that LG did a fair bit of tuning to make this display as true to life as they can. Pictures look absolutely fantastic and the colors from plants and flowers really spring to life. I haven’t watched much video yet but the little bit I did looks great as well.

Overall, it seems LG really stepped up its game with the G8’s display and if you were looking for just one reason to upgrade, this might be it. 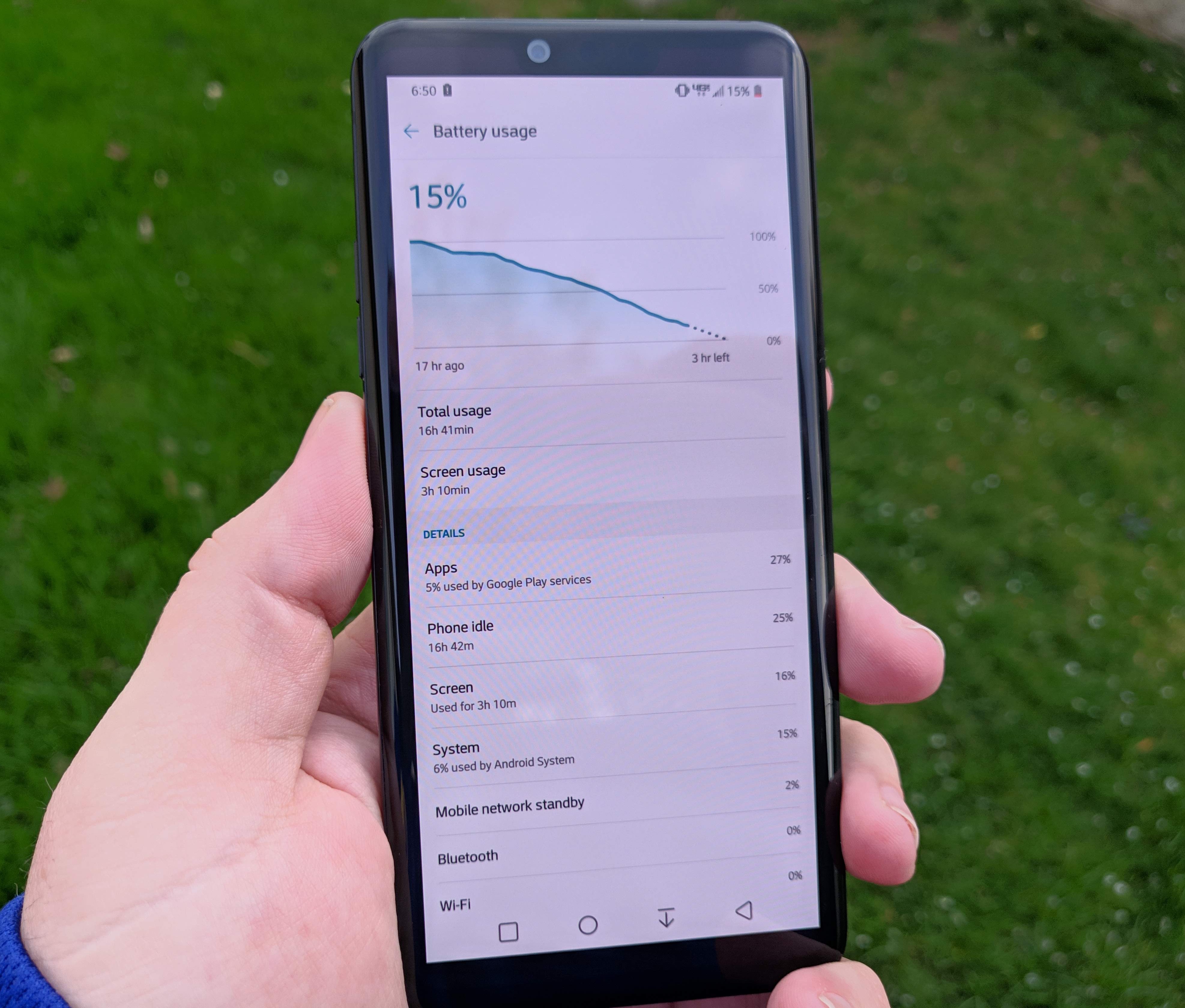 Battery life in our first 48 hours has been a bit below our expectations for a 2019 flagship. The G8 is powered by a Qualcomm Snapdragon 855 SoC which is a far more efficient chip than the LG G7’s SD845 from last year but we’re not still seeing great battery life.

Again, take this with a grain of salt because we’ve only had the device for a few days, but we topped out at 4 hours of Screen on Time with plenty of background music streaming going on. With devices like the Galaxy S10, a phone consumers will directly compare it to, gets more than five hours of screen on time, it’s definitely disappointing.

Luckily LG did include faster charging standards than Samsung (Quick Charge 3.0 vs. Quick Charge 2.0) and includes 9W wireless charging. I was able to throw the phone on the charger for about a half hour and power through the rest of my (very late) night.

If you’re a power user, you’re probably already looking at phones like the Huawei Mate 20 Pro, OnePlus 6T or Samsung Note9 or Galaxy S10 Plus. I don’t think the LG G8 is going to give you any reason to consider it over those otherwise unless you sit it on a wireless charger all day. Maybe that’s a bit harsh but it’s not my first choice for an endurance champ. 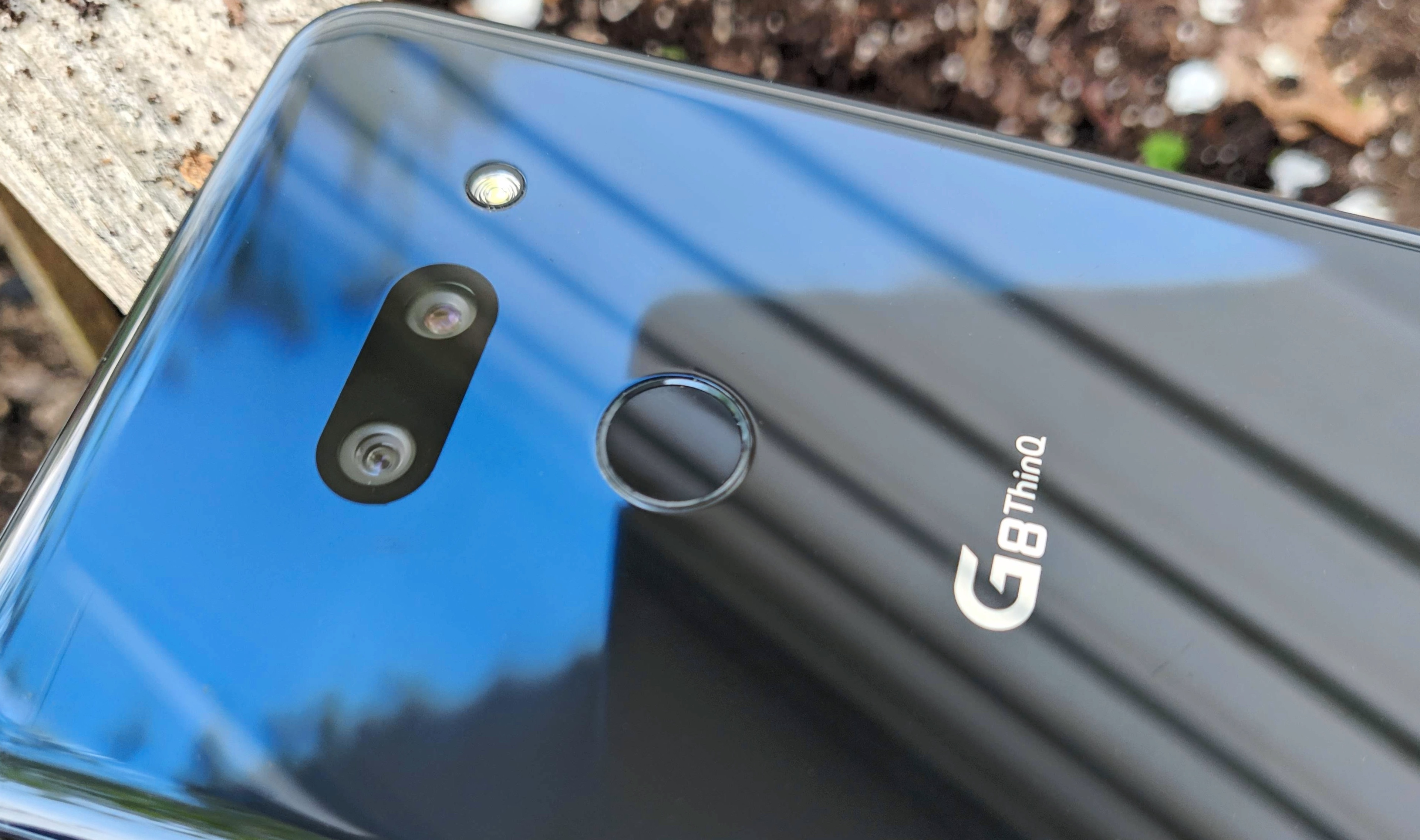 The LG G8 has a dual-lens setup on both the front and rear of the device, with the main camera setup employing a 12 MP f/1.5 optically stabilized sensor next to a 16MP f/1.9 ultrawide sensor. The front features an 8 MP f/1.7 sensor next to a time-of-flight sensor that allows the phone to perform all kinds of interesting tricks (more on that later).

Shooting pictures on LG phones has always been a joy and I have much the same experience I always have. Whether that’s a good thing or not, I’m not quite sure. Sure, I love the LG camera app and the wide-angle lens, but I don’t know how much progress LG has truly made in the last few years.

Other reviews have rightly pointed out that there can be quite a bit of grain and artifact in pictures taken on the G8. This is an issue that has plagued LG devices for some time.

LG also made some interesting choices in the camera app like not being able to swipe through modes, instead switching over to the selfie camera whenever you swipe. While I see some of the logic here, it doesn’t feel well thought out and hurts usability.

We’ll dive further into the camera in our full review. 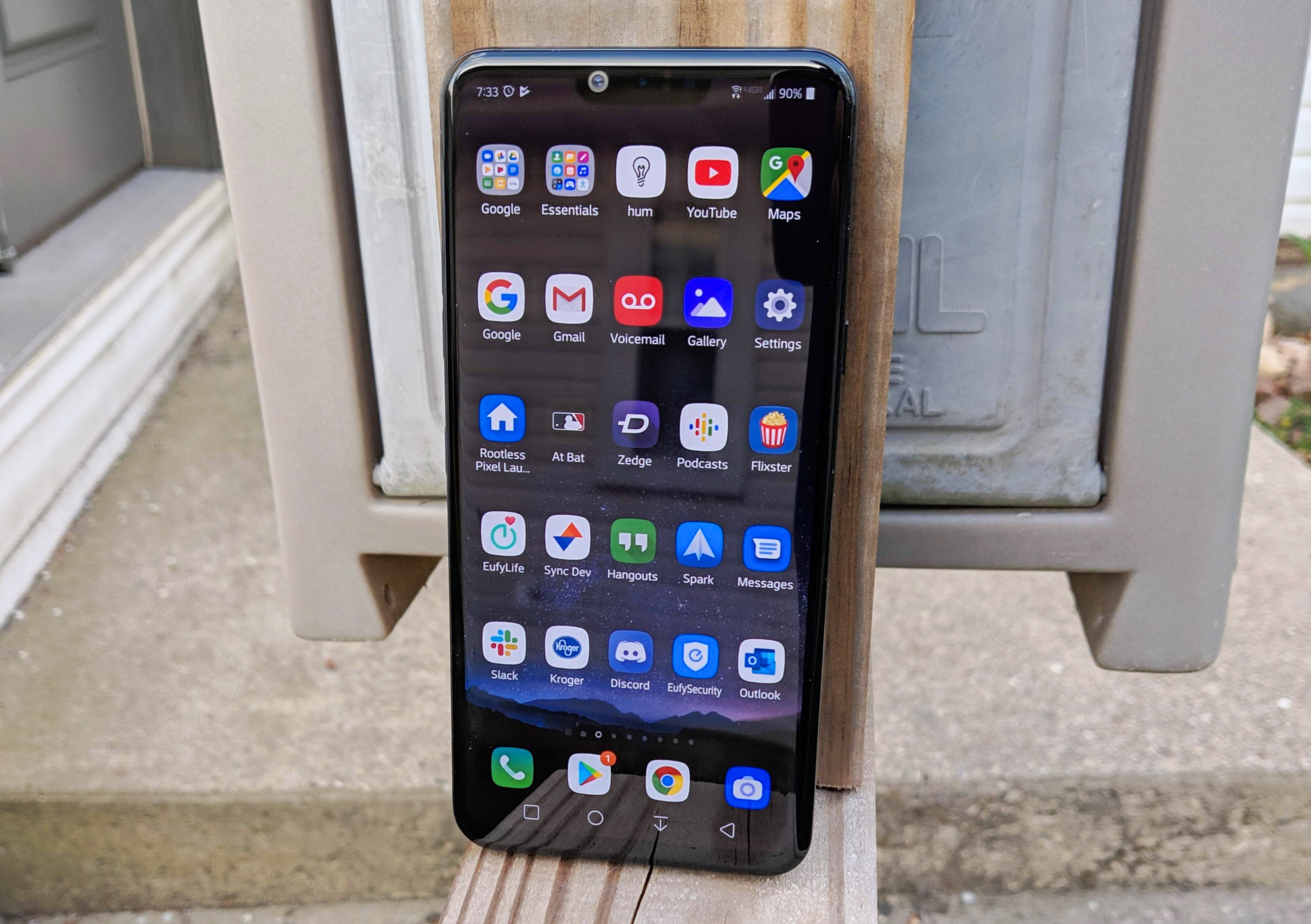 I’ve never been a fan of LG’s approach to software. I tend to find its software skin to be heavy-handed, offering little benefit over stock Android. The story is much the same on the LG G8, though this time we do see some new tricks that might interest you. Until you actually try to use them, that is.

For some reason, LG has continued to stick by its out-of-the-box launcher with no app tray. I don’t know who advises the company to continue with this here in the West but I hope they cut it out.

This might work for Asian audiences, but it’s an unpopular move here in the Americas with 100% of the people I’ve questioned about it. And that’s not just heavy smartphone users as they range from “how do I turn on a phone?” to outright Android experts.  All of them pan the interface.

The app tray is one of the largest single advantages Android has over iOS and LG hides it. Why? If I want all my apps on my home screen, I’ll leave them there when they install.

Not only does the software experience not make a ton of sense, it’s laggy too. Double pressing the multitasking button top open my last app ranges anywhere between frustrating to just plain broken.

There is, at minimum, a delay while the system tries to figure out what to do and sometimes it just ignores me altogether. I wish this was an outlier, but it just seems to be an example of the larger problems with the phone.

Don’t get me wrong, 95% of the time the phone performs fine, but then it just doesn’t. It’s great until it isn’t and that’s absurdly frustrating. I’d imagine this is from poor optimization and can be fixed in future software updates, but it’s not a great look for LG right out of the gate.

The Time-of-Flight sensor on the front of the phone lets users operate it hands-free to control functions like skipping songs and adjusting volume. This is a nice concept but I’ve yet to get it to work. I’m not saying I haven’t been able to get it to work reliably, I’m saying I can’t get it to work at all.

While this first impressions might come off overly harsh or negative, I think the LG G8 is a really solid phone.

As I said at the outset, it’s probably the most comfortable in-hand phone on the market right now, even if it is pretty slippery. This comfort level cannot be overstated. Every time I pick up my OnePlus 6T or Samsung Galaxy S10+, I wish it was the LG G8 and that’s pretty impressive.

I really enjoy the look and feel of the G8 right up until I actually start using the device. The software experience really holds the phone back from being a top-tier contender in my opinion.

I’d love to see a software overhaul much in the same way Samsung recently radically changed its One UI experience. Focus on putting UI elements in the bottom half of the device with large text on top for easy actions and easy navigation. Get rid of the light color scheme and pastels for a darker and bolder aesthetic. Optimize your system so I stop having issues that remind me of Android Lollipop.

There’s a ton of potential here because the LG G8 has outstanding specs, but LG holds the phone back with sub-par software. This is a familiar story for LG devices.