If there’s one thing Motorola has been great at doing since the original Moto G, it’s creating a great phone for a very great price. Even under new Lenovo ownership, the same holds true for the Moto G4 Play. If you’re looking for a great valued, brand new smartphone under $200, you can’t go wrong with this phone.

The Moto G4 Play contains the same materials used on the outside on the regular Moto G4, which I ended up really liking. The back is a textured plastic that feels like rubber and gave me a good grip on the phone. The Motorola “M” dimple is back, and although it’s really subtle, it’s a good reference point for your index finger as you make calls. I’ve grown to prefer all-metal phones such as the HTC 10 and Nexus 6P, but after a couple days I didn’t mind the relatively “cheap” plastic feel of this phone. For the asking price, this phone feels solid. 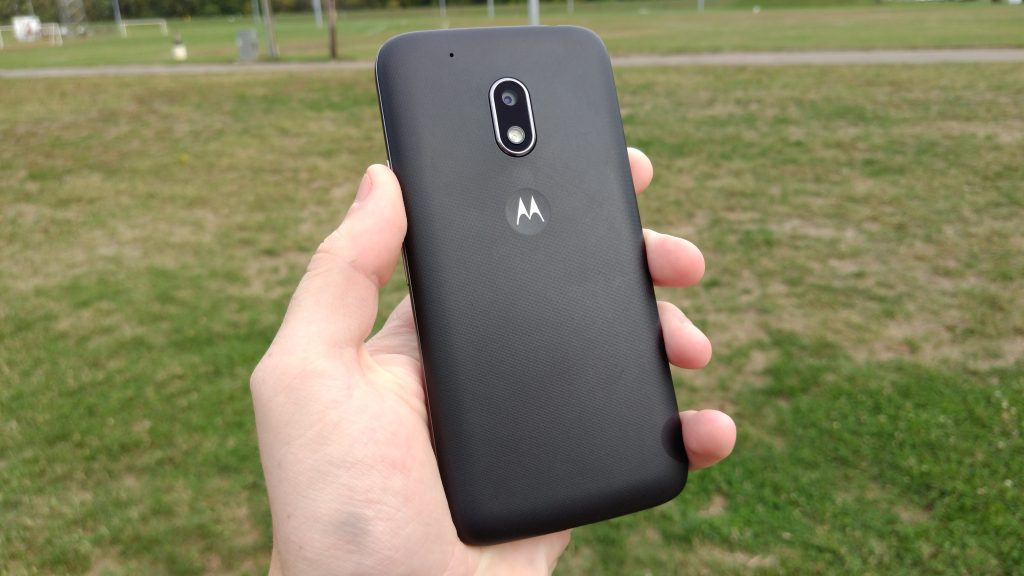 I tried twisting the phone and bending it a bit, but didn’t feel any creaks or movements with the outer body. Motorola advertises this phone as water resistant too, but don’t go dipping this phone into a full tub of water. It’s meant to withstand rainfall and spills, but not full water submersion.

The body is definitely manageable to hold with one hand, but with wider bezels than most 5 inch phones on the sides and top, it’s not as easy to hold as the Nexus 5 for example (on the right in the image below), a phone that came out in 2013. However, I can’t complain for the price, and I was certainly able to use this phone one-handed without much hand adjustment. Motorola sure knows how to put a decent display on an affordable device. A good comparison would be with the Nexus 4’s display, as they both look near identical, despite the G4 Play having a slightly larger 5 inch display and newer Gorilla Glass 3. 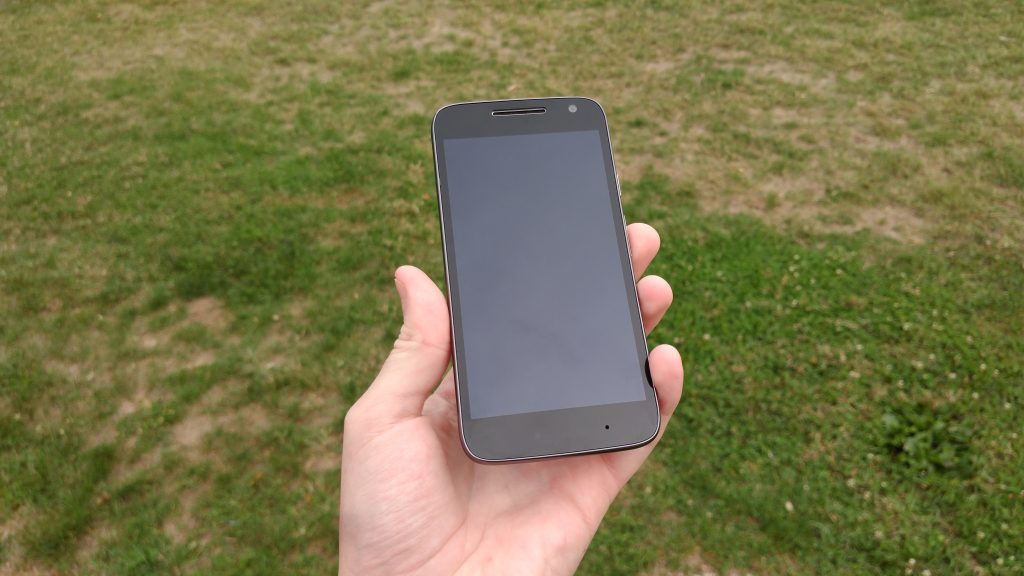 The colors look quite natural, but slightly more washed out than the regular G4. Color saturation matches just about all lower-end LCD displays, however the darker colors look lighter than they should be. There’s a noticeable light bleed coming from the back lights of the panel, but this is only apparent when the phone is viewed from the sides or bottom. If you’re worried about the lower 720p display, don’t be. Everything looks very crisp on it, and I really enjoyed scrolling through wallpaper apps trying out the sharpest offerings.

This is the aspect of the G4 Play that shocked me the most. This Snapdragon 410-powered phone actually runs really fast and everyday tasks felt very snappy to me. If I were to compare every day performance of this phone with another, it would be just slightly slower than the Nexus 5 powered by the Snapdragon 800. It sounds crazy, but I am using them side by side and the differences are extremely minimal.

Gaming performance was frustrating with the G4 Play, as games took a very long time to load, with an average of 88 seconds to load my Fallout Shelter game, with similar longer than average loading times with other games. Other than that, frame rates held up well enough and I didn’t notice any crazy slowdowns during intensive games like NOVA 3.

Multitasking on the G4 Play was a pleasant experience, with the 2GB of RAM providing just enough space for you to switch between your most recent 5-6 apps on average with no hesitation or reloading. Anything more than 6 apps though you’ll see some of them close and reload when you open them.

Performance is much better than I expected with this phone, and it shocks me that I can get very similar UI navigation speeds in a phone that costs a fraction of today’s highest end devices. You won’t be sorry with the Snapdragon 410 on-board.

Like the Moto G4, the Play version offers fantastic battery life. With this 2,800mAh battery, I’ve been consistently getting at least a day and a half of moderate to heavy usage. Using a lot of Snapchat, way more Groupme than I’d like to admit, occasional SMS texting, web browsing, lots of Reddit and an hour or two of YouTube and Netflix a day, I have not felt worried about getting through a day with this phone. 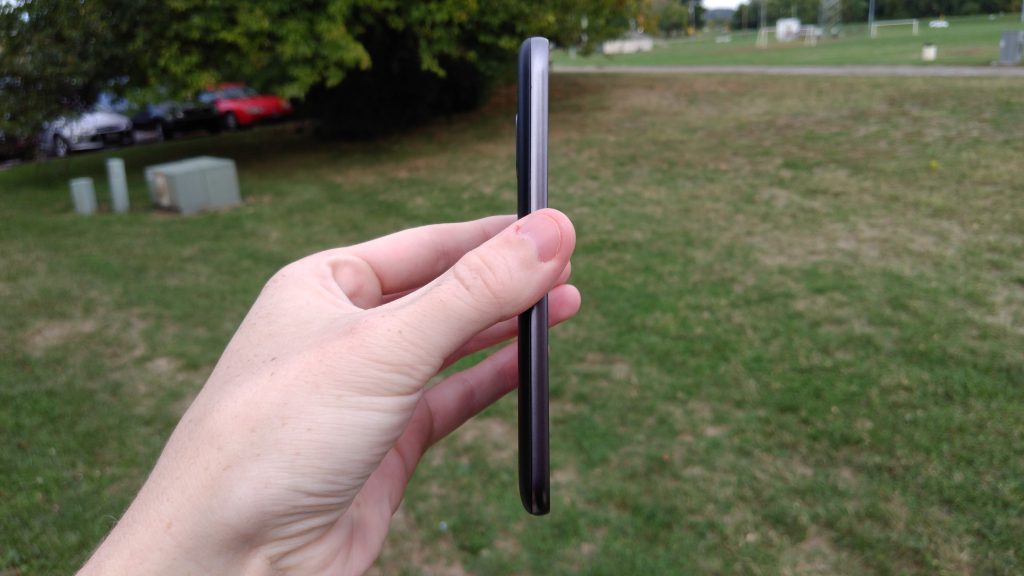 The only downside is this phone has a big battery but no fast-charging capabilities. This means charging this phone to 100% takes quite a bit of time and I recommend you plug it in at night regardless of what’s left after a day. And with Android Marshmallow, standby battery life is just as phenomenal as other phones, only draining 1% on average at night off the charger.

If you’re on the go more than the usual person and aren’t often around a charger or don’t want to wait for the slow charging, you’ll be glad to know the battery is removable so you can buy a new one to swap out whenever (after you power down the phone, of course).

You might be thinking you’ll be getting the world’s crappiest smartphone camera in a phone at costs $150 unlocked, and at first I was under that impression as well. But as I took more shots throughout my testing, I became more and more impressed with what a camera of this cost can get you. 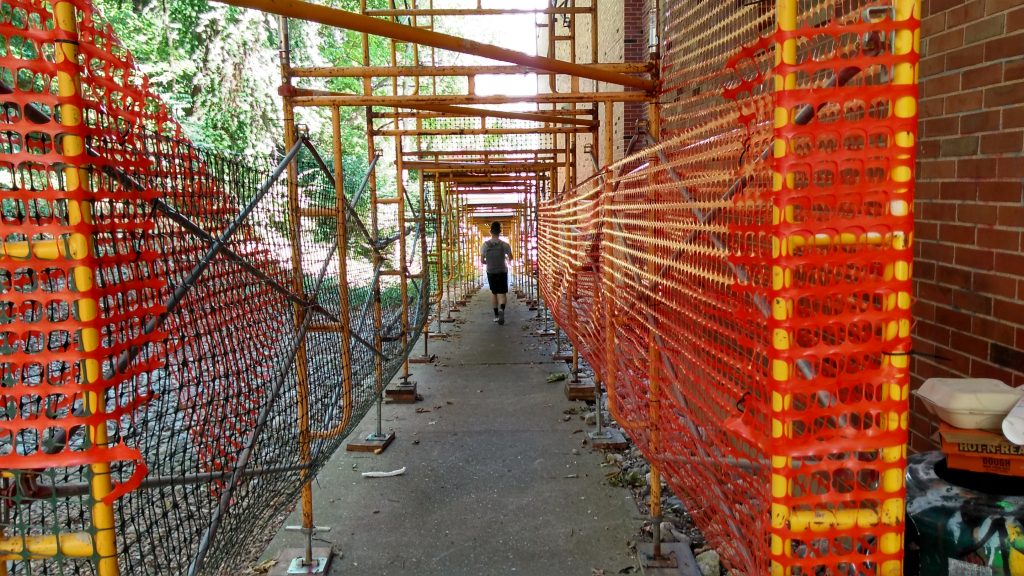 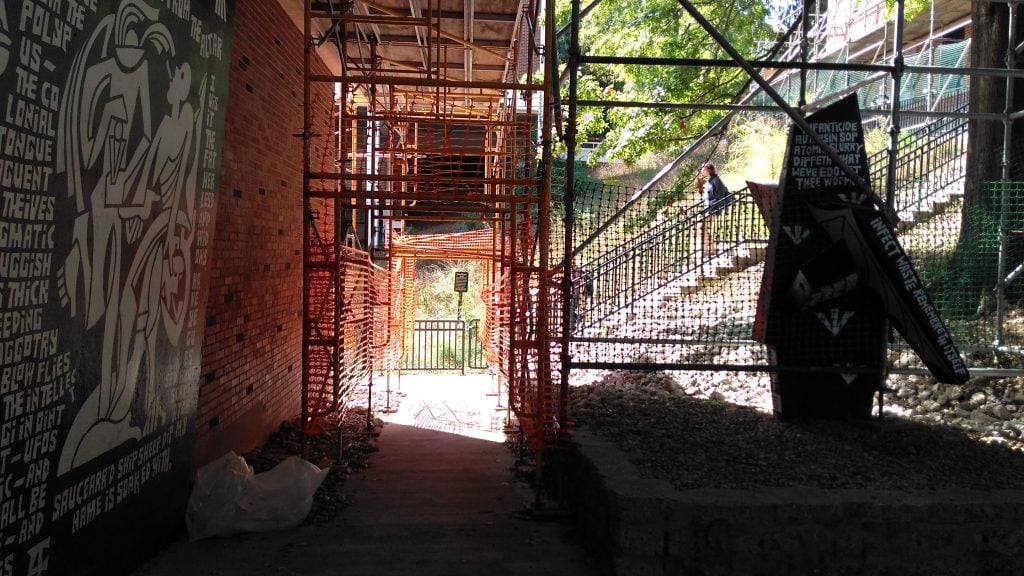 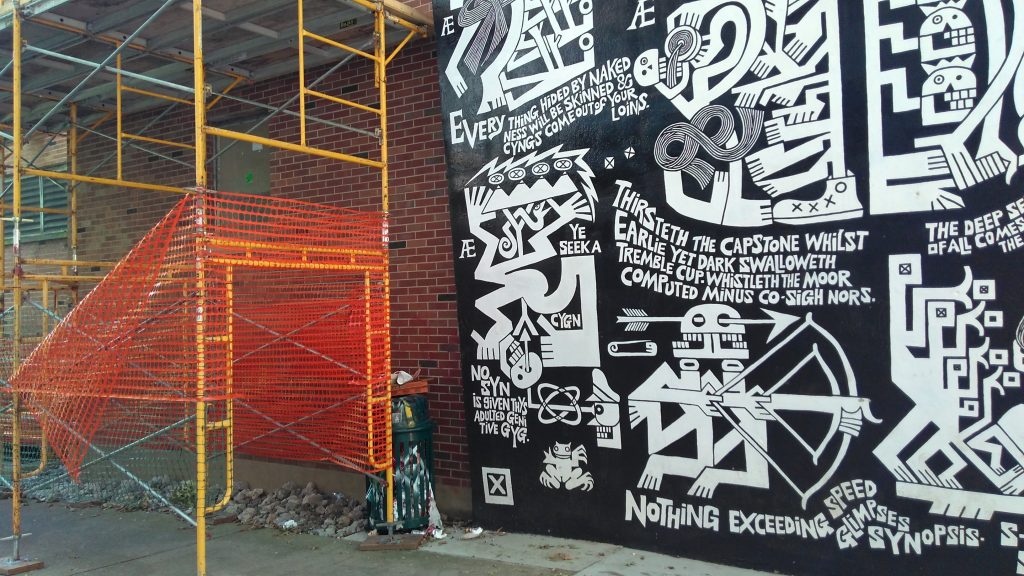 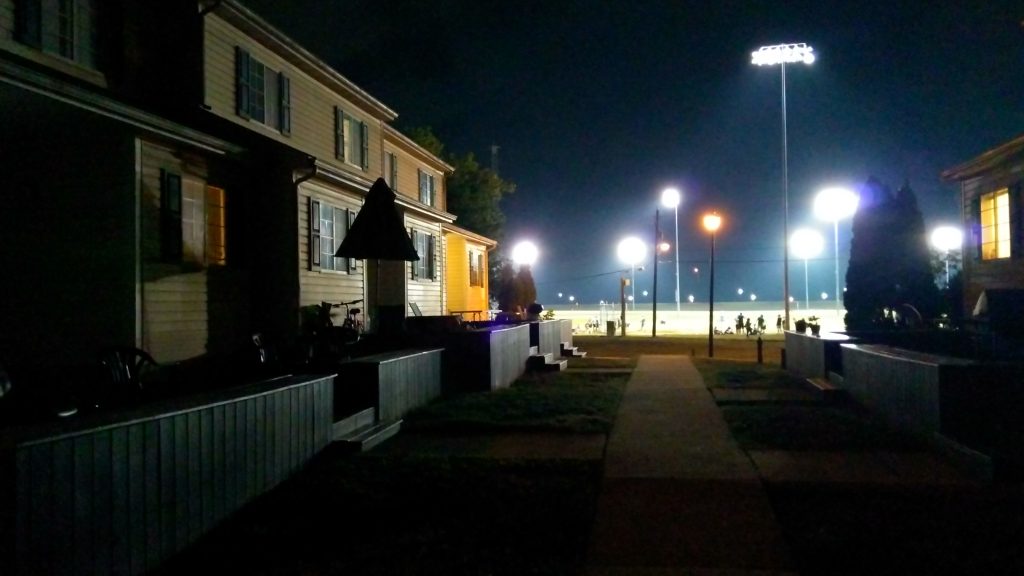 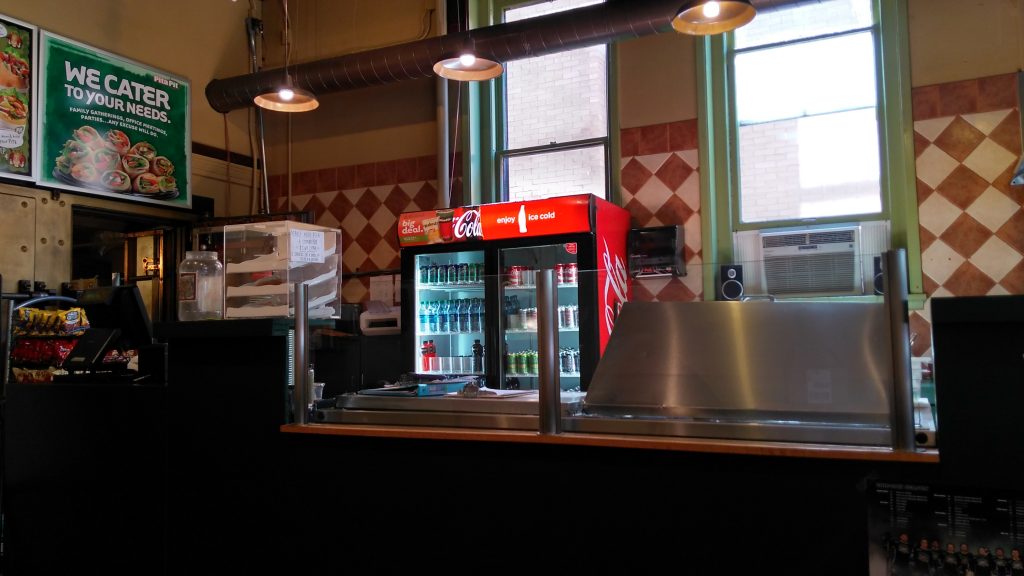 Photography is not my expertise, but I’d like to talk about these photos I’ve included here. Shots in full daylight lack a bit of detail when zooming in, and blurriness is evident with the lack of OIS. I had to stand and hold the camera very still to get a crisp shot, but when I did I was happy with it.

Shots with HDR, such as the second photo above, don’t seem to capture the correct lighting in dark areas, and detail falls short because of this. HDR processing time took about two seconds as well, which is more than I’d like to wait. The graffiti wall shot pleasantly surprised me by keeping the correct lighting of the shot and the right amount of detail when looking at the wall. I also appreciate the outdoor shot of my campus, as the detail of the back building and the bushes looks pretty good for a camera of this price.

As you see with the night time shot, you might as well not bother taking pictures when the sun goes down. The lights in the field are way blown-out, the shutters on the houses are barely captured, and there is absolutely no detail found on the grass. However, finding a good phone that can take good pictures at night, even at expensive prices, can still be difficult.

With the G4 Play, Motorola clearly did a great job optimizing the software to take full advantage of this Snapdragon 410 chip, as this phone handles everyday tasks with no problem, and barely any hiccups. Navigation is far more fluid than it has a right to be at this price, and that more than likely has to do with Android Marshmallow on-board and Motorola’s dedication to optimizing software correctly. 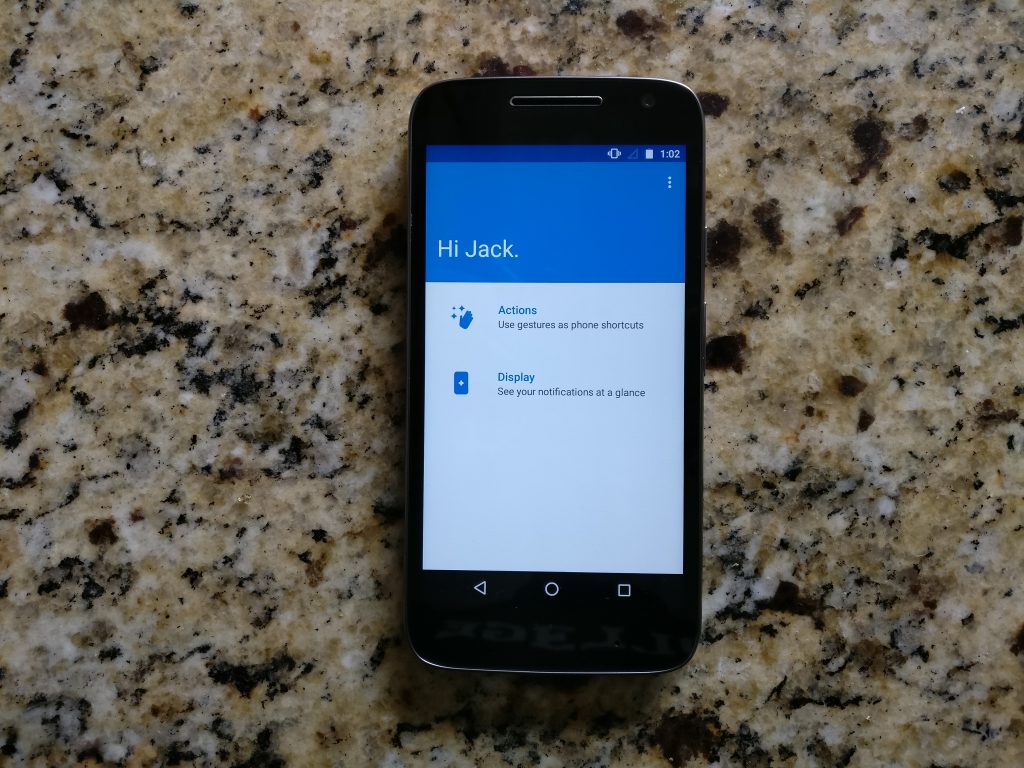 Motorola added a few features not found on stock Android, but I’m disappointed they did not include some of the gestures that made other Moto phones great, such as twist for camera and chop for flashlight. Whether this is because of the lower-end CPU or something else, I really wish it had it anyway. Moto display is back, providing convenient pre-lockscreen notifications, but it doesn’t look as good as it does on other Moto phones because of the more noticeable light bleed coming from the display.

Motorola also included a screen shrink option for those wanting full range of the display with one hand. To activate this, simply swipe up from the navigation bar. To deactivate, you just have to touch any part of the black area above the display. The Moto G4 Play impresses me almost as much as when the original Moto G came out years ago. For $150, you can grab a customizable phone directly from Motorola’s website that offers a crisp 5 inch 720p screen, a front facing speaker that gets fairly loud, speedy performance that almost matches flagship devices, incredible day-and-a-half to two-day battery life, and a solid build. The phone’s cameras are lackluster if you compare pics with other phones, but in daylight it’ll get the job done just fine. There’s also no quick charging, but the large battery makes up for this.

I recommend this phone, hands-down if you’re looking for a new phone under $200.

When and where to buy: Motorola Moto G4

The fourth generation of Motorola's affordable and moderately built mid-range smartphone line, the Moto G4 provides users with a 5.5-inch display at full HD 1080p resolution. Powered by an octa-core processor with 2GB RAM, the Motorola phone comes in two...
Read more
Note: Select outbound links may include affiliate tracking codes and AndroidGuys may receive compensation for purchases. Read our policy. As an Amazon Associate we earn from qualifying purchases.