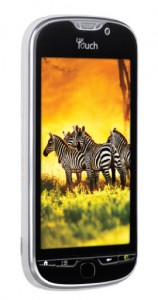 T-Mobile fans and subscribers, I would wager to say that the majority of us are sporting something from the MyTouch series if we don’t have the Nexus One.  Personally, after the G1, I moved to the MyTouch 3G, then to the MT3G Slide, and now, I have had the opportunity to get my hands on the 4G (Originally to be called the MyTouch HD, remember?)  I wanted to take a moment to give you the good, the bad, and the ugly.  Remember, this is just one phone geek’s opinion, but hey, I’ve used every phone in the MyTouch series, so I think I have some clout.

First, let’s start out with the screen.  Amazing, simply beautiful.  It’s large enough to support Gingerbread, but not too large that it’s uncomfortable in your hands.  It is very clear, and watching videos, or playing games (like Angry Birds) is pretty nice on it.

OK, the size of this thing, for me, is pretty tight.  It IS a little heavy, but again, not like it is unbearable or anything.  It has a form factor that is comfortable, but tends to be awkward if you’re trying to nudge it between your elbow and cheek to talk.  (The phone tends to move just far away enough from the ear that it makes it a little hard to hear, but maybe it’s just me.)  But, on the bright side, it doesn’t have a physical keyboard (which I don’t like) so it’s nowhere near as bulky as the Slide. Also, the genius button is pretty cool, but to be honest, I don’t normally use it, but if I were to discipline myself, I’m sure it would be advantageous.

The front-facing camera, oh man.  This thing is amazing.  First of all, it’s good for checking to make sure there isn’t spinach or anything in my teeth after eating, but also for taking pictures of myself with a friend. (We have all had that experience where someone’s ear gets cut out of the picture.)  But let’s face it, the front-facing camera is designed for Video Chat.  It works, and pretty well.  Well, now it does.  The day I got the phone, it didn’t work at all, and it was laggy, and there was no sound, but that night, I did get an update for Qik (the video chat app) and then it did fix it.  I video chatted with a friend that has an Evo.  It also comes integrated with Yahoo Messenger and one can do video chat that way, but as I don’t use Yahoo, I haven’t tested this out.  Personally, I downloaded Tango, because it’s available for other operating systems that have a phone with a front-facing camera.  (I won’t mention any iNames.)

The MT4G also comes stock with FroYo, so that means the WiFi hotspot, Market Apps on the SD, and so forth. These are great, and fortunately, T-Mobile does not charge extra for tethering, so I have used that a bit here and there.

Another great feature is the WiFi calling.  This is both great and bad for me.  Back in the day, before Android T-Mobiel featured “HotSpot @ Home UMA calling” plans, and certain phones worked with it, but essentially, ANY call made while connected to WiFi was free, and didn’t use your plan minutes.  It also seamlessly swapped from UMA to Edge (yeah, before 3G.)  Now, the WiFi calling works great, especially when I’m on campus in a building that gets no service, because they converted an old basement into a classroom, I can still get all my messages, and make calls… No doubt, it works, and works well, but it still uses your plan minutes, and all calls made from the WiFi must be ended while on the WiFi, it doesn’t swap between WiFi, 4G, HSPA, Edge, or whatever.  That’s kind of a downer for me.

It does also come with a fair share of bloatware, but that’s to be expected.  The free trials of a couple games are fun, and I am interested to try out T-Mobile TV, but not looking forward to paying the subscription fee, so I’m going to hold off on that one for a while.  Some of the default software is pretty cool though.  My favorite is the ScreenShare.  The EVO 4G does the same thing, but now it works on the MyTouch.  Basically, from the same wireless network, you can share your screen, including music, videos, and pictures.  It’s pretty cool.  When you’re phone is is desk dock mode, with the earphones, you can listen to the FM radio, which isn’t the most amazing thing in the world, but a cool feature.

Finally, let’s talk battery.  We love our smartphones, but they are battery killers.  Especially when we use the phones like they are designed to be used.  I am a power user.  I’ve had to charge my MyTouch Slide half way through my school day in the past.  The 4G has an AMAZING battery life.  I don’t know how, because I leave my WiFi and GPS on all the time, get my email notifications, my texts, my tweets, and my random internet searches, and 12 hours later, I’m still not in the red, so yes, I am very impressed.

All the other info, like specs, camera quality, and all that stuff we’ve already reported on and read about.  Camera’s fine, good quality, speaker is fine (although I read that people did not like the speakerphone, because it wasn’t loud enough.  I personally haven’t had that problem.)

So, there you have it, guys, just my opinion, but this is a pretty amazing phone, and I would highly recommend it.