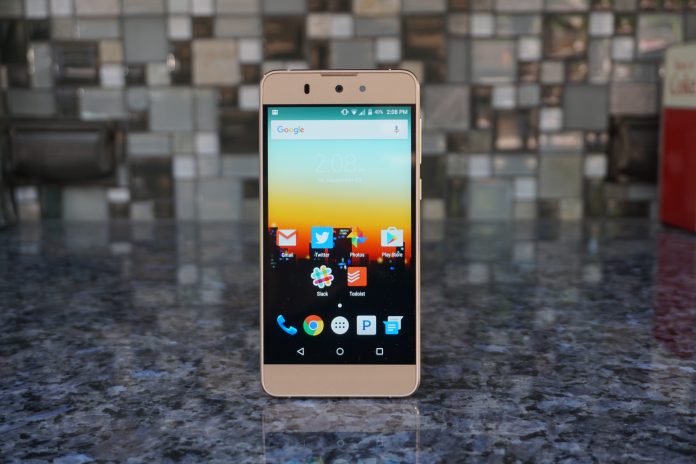 Posh Mobile is a relatively new player to the mobile phone scene. Posh released its first devices in 2013 and has grown its portfolio to include over 20 GSM unlocked Android-based phones and tablets. In a crowded market filled with hundreds if not thousands of budget friendly devices, Posh sets out to be different from the crowd with the mission “Elegance for all.”

I have spent the last two weeks using Posh’s Optima LTE L530 as my daily driver on the T-Mobile network. For a budget device, the unboxing experience was a good one. Included with the phone, Posh gives you a case, screen protector, headphones, charger and a sim tool. Posh Mobile was a relatively new name to me when I received the Optima L530. I was aware that the company had made the largest and smallest Android phones available on the market, but this was my first experience using one of its devices.

I know it is said a lot, but cheap phones are continuing to get better. The Posh Optima L530 is a GSM unlocked device that was released in April of 2016. Though I missed my 6P, I found myself missing it less than I would have predicted. The Optima is a very solid selection for those looking for a budget phone with a premium feel, great battery life, and a decent display. While Posh lists the MSRP for the Optima at $229.99, you can buy the phone on Amazon in both black and gold for $169.

The Posh Mobile Optima LTE L530 has a very nice balance between metal, glass, and plastic. Glass is used to cover both the front of the device and the rear facing camera. This Glass gives the phone a premium feel while also providing increased durability. A plastic plate covers the back of the phone, but it does not detract from the phone’s premium feel. Joining the front sheet of glass and rear sheet of plastic together is a metal skeleton. In addition to feeling great in hand, the metal band provides a lot of rigidity to the device. 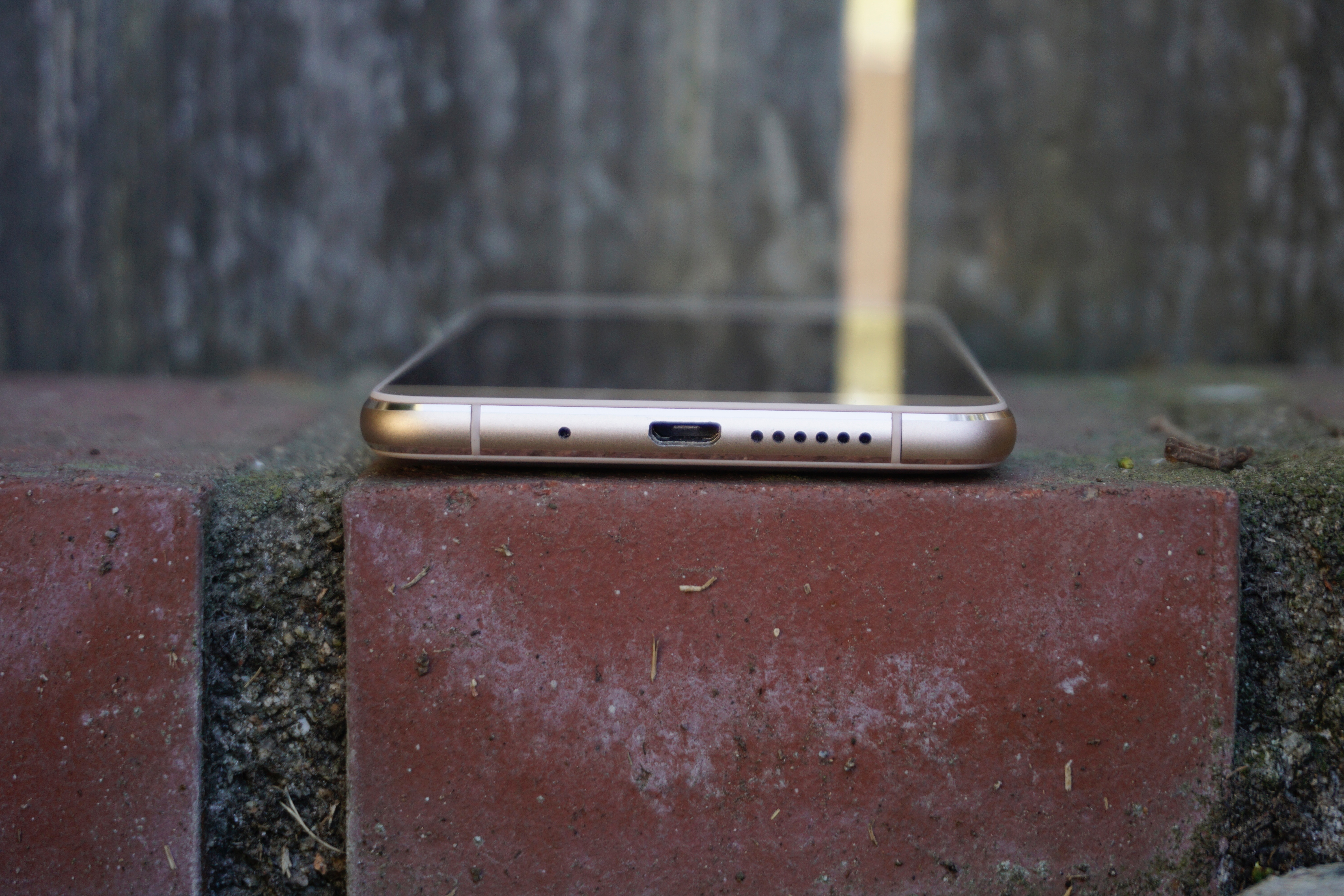 To get this premium feel out of a “budget material” like plastic, Posh used a glossy hard plastic that feels similar to glass. While I’m sure this plastic back allowed them to save a lot of money on production thus keeping the device cheaper for consumers, the back is slippery and scratches extremely easily. A few days of setting the phone on my desk and visible scratches appeared on the rear of the device. Despite the slippery feel and ease of scratching, I’m glad Posh used the materials they did. Between the 5.0″ screen and premium feel, the device is a joy to use and fits well in your hand. 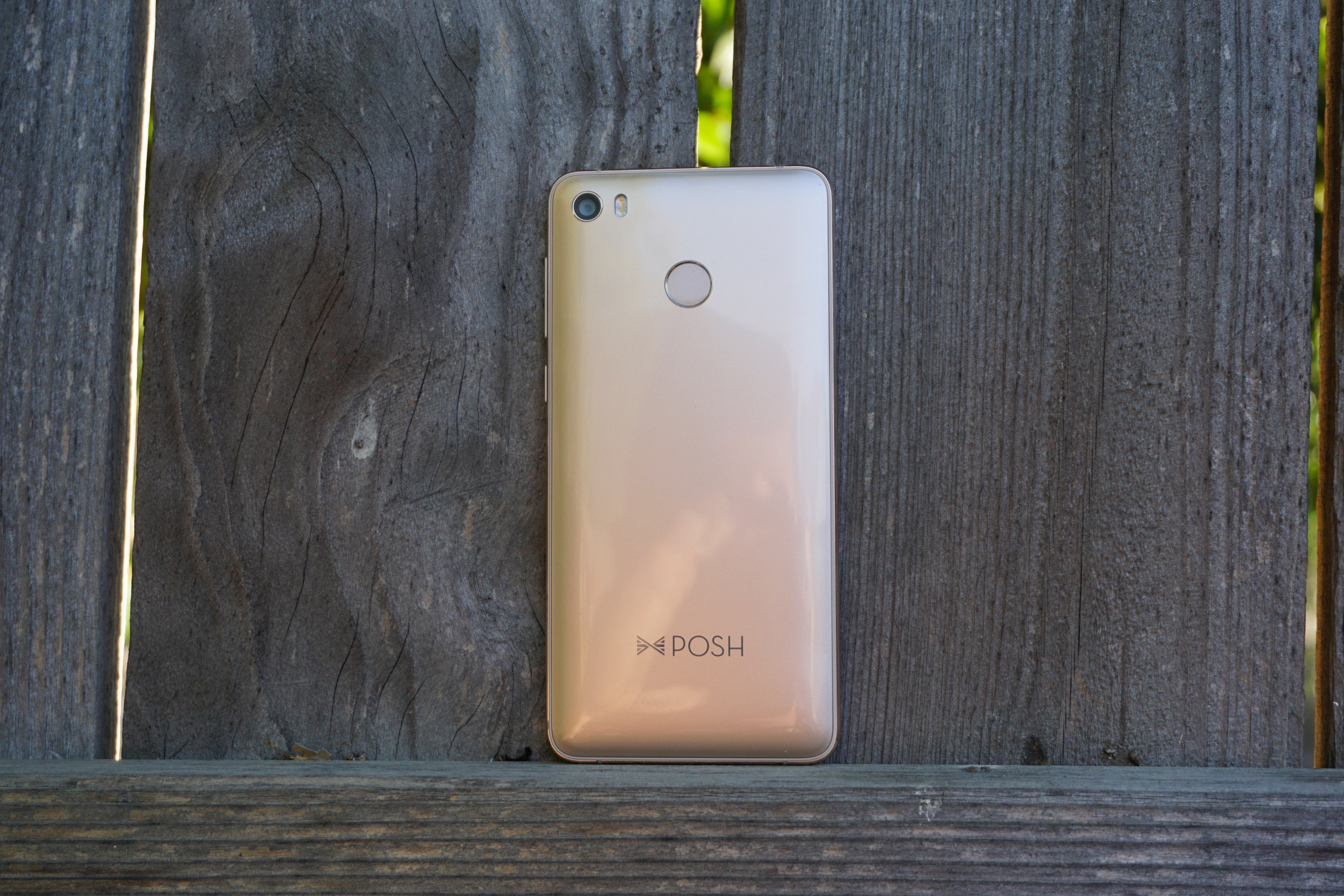 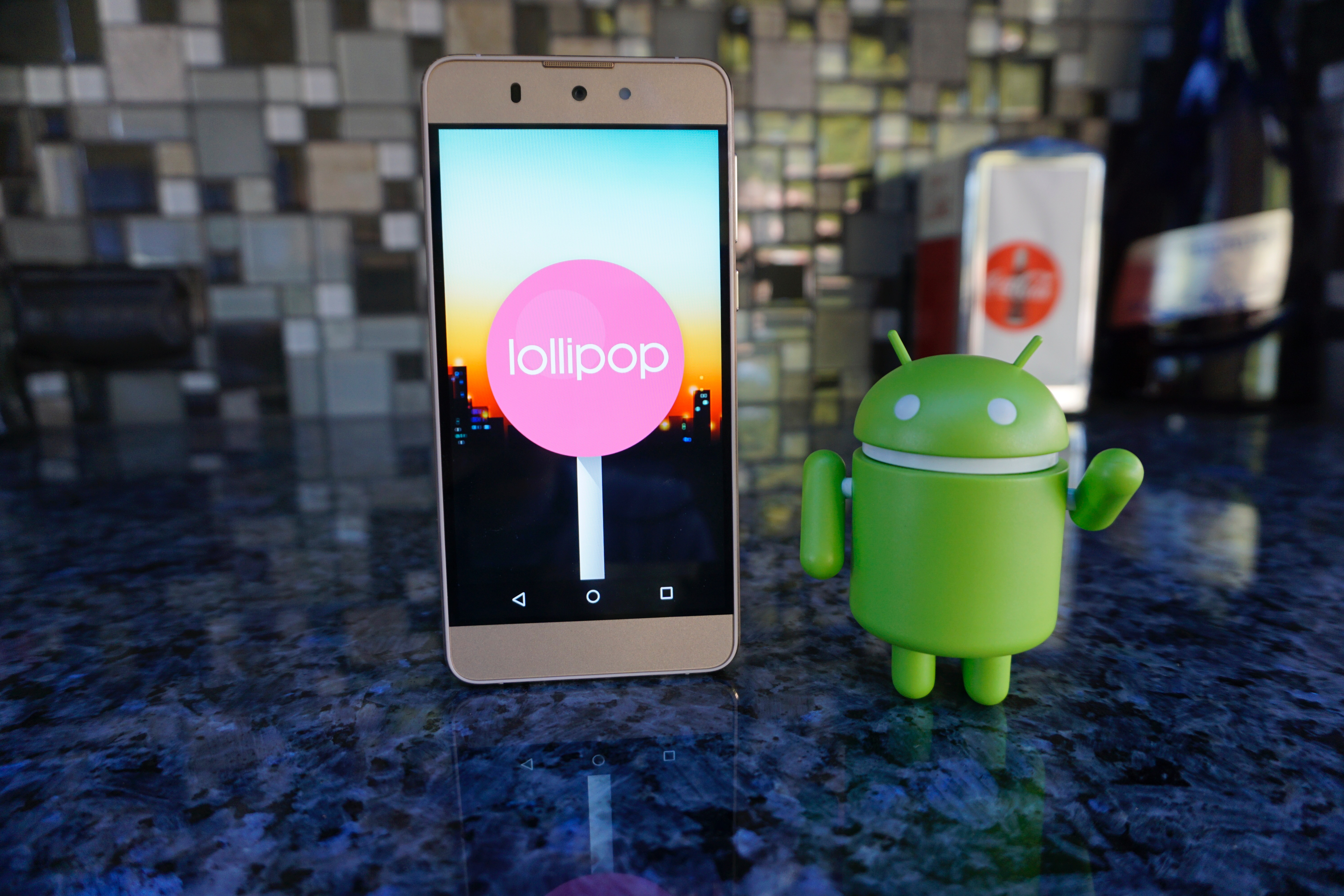 The Optima LTE L530 has a 5.0″ IPS LCD with a resolution of 720p. Following the example of many budget phones before it, the Optima uses a lower resolution LCD panel to presumably save money and get the most out of the battery. The display did not seem cheap in the slightest, though, and I enjoyed using it to watch videos and read. The Optima has wide viewing angles and PPI nearing 300 allowing text to be read clearly at nearly any angle. 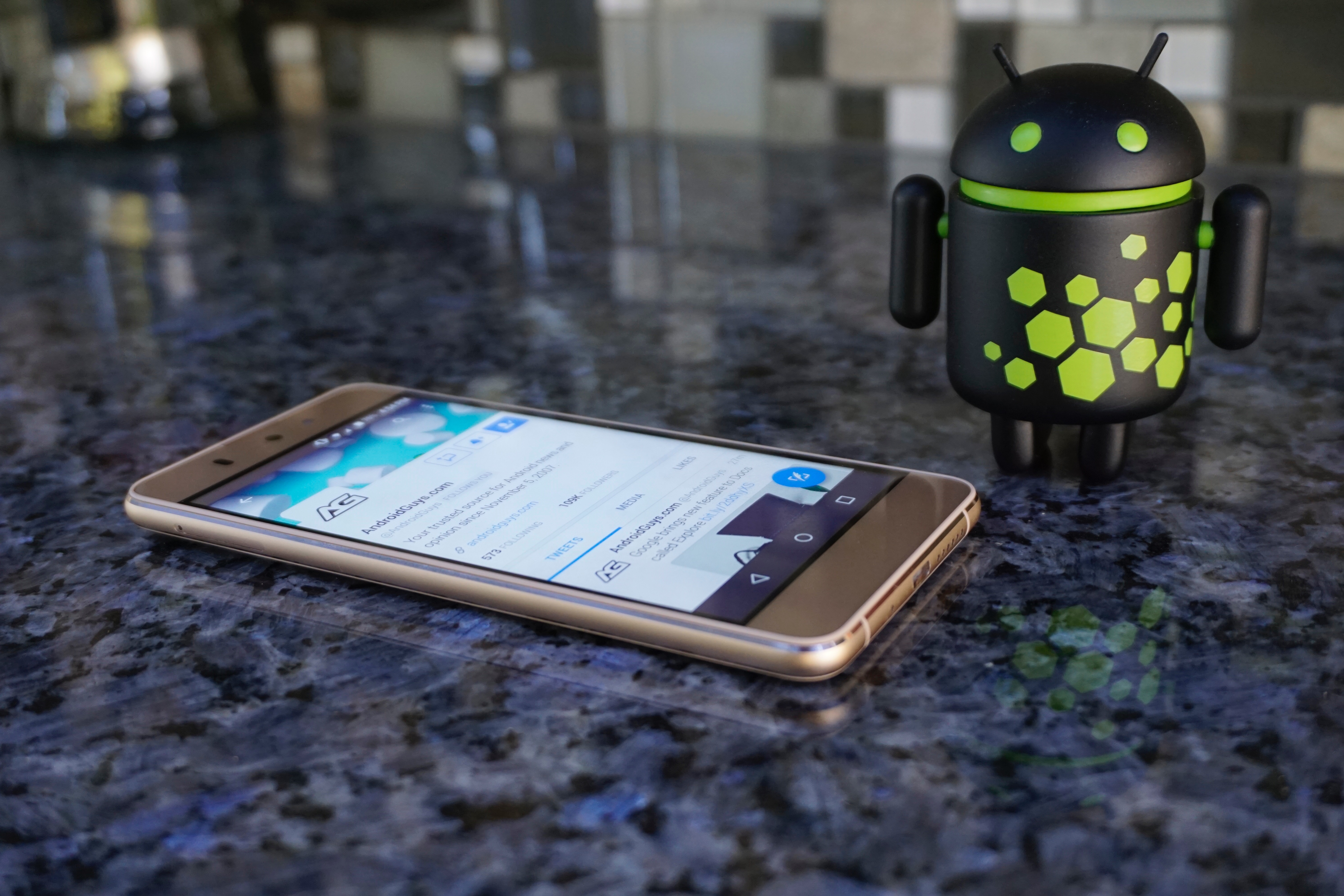 A few Posh devices have had issues with the overall brightness of their displays being very low; this is not the case with the Optima L530. I found that I had to turn the auto-brightness feature off to prevent the device from cooking my eyeballs indoors. I leave the brightness at around 35% at almost all times both indoors and out. The only time I adjust the brightness is in bed at night when I’m reading. Even with the phone’s ability to deep fry your corneas, its lowest light setting is still shockingly low and allows for a good experience reading at night.

The software experience across the Posh lineup varies significantly. Some devices like the Volt L540 come with a heavily skinned version of Android. The Optima L530 does not. Posh has added some “enhancements” to its version of Android, such as functionality for the fingerprint scanner, but I was excited that the phone still feels distinctly like stock Android Lollipop. 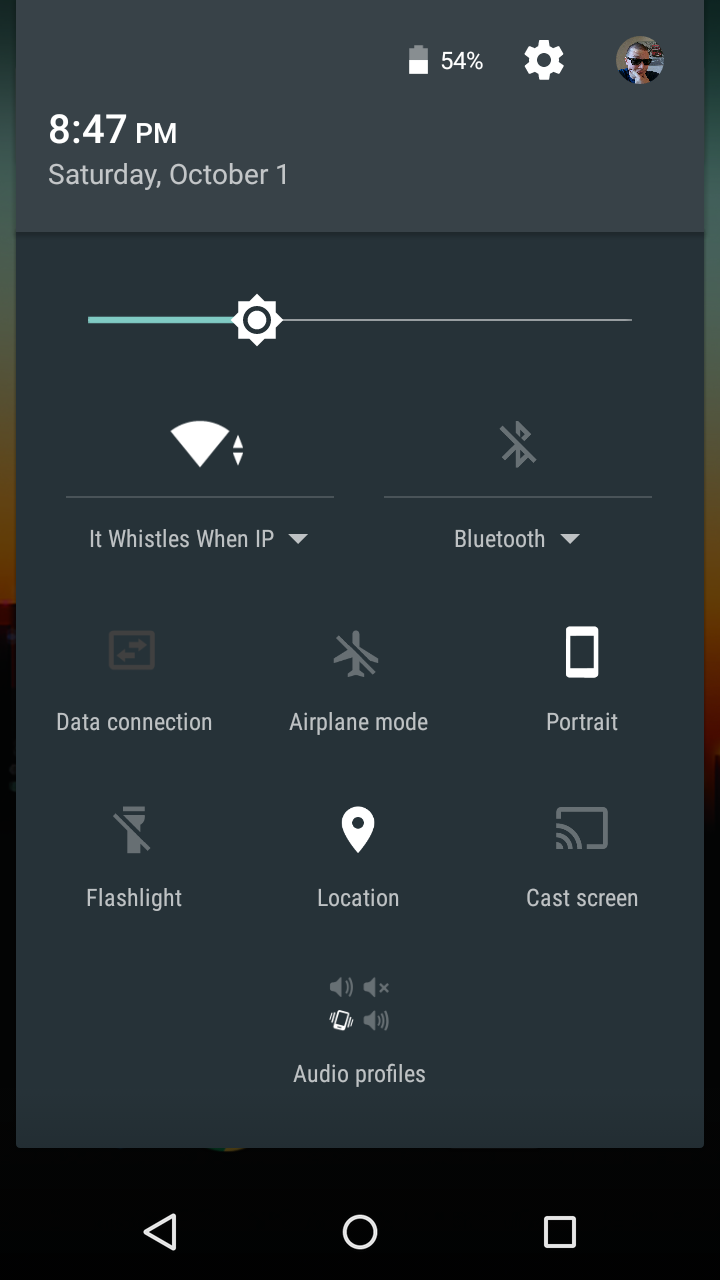 When you get the device, you will need to do a bit of downloading. The phone comes with almost nothing installed. No bloatware, no extras, nothing except the mandatory Google apps and a handful of Posh apps like “Posh Apps” (Which doesn’t load), Inbox (Not to be confused with Googles Inbox), an FM radio tuner, and a basic sound recorder. This is a nice change from the bloatware riddled devices I am used to. I was able to choose what I wanted to install, and I didn’t have to navigate around other “mandated” software. This experience was a bit freeing for me. Despite all this freedom, though, I am still having issues changing my default messaging app. 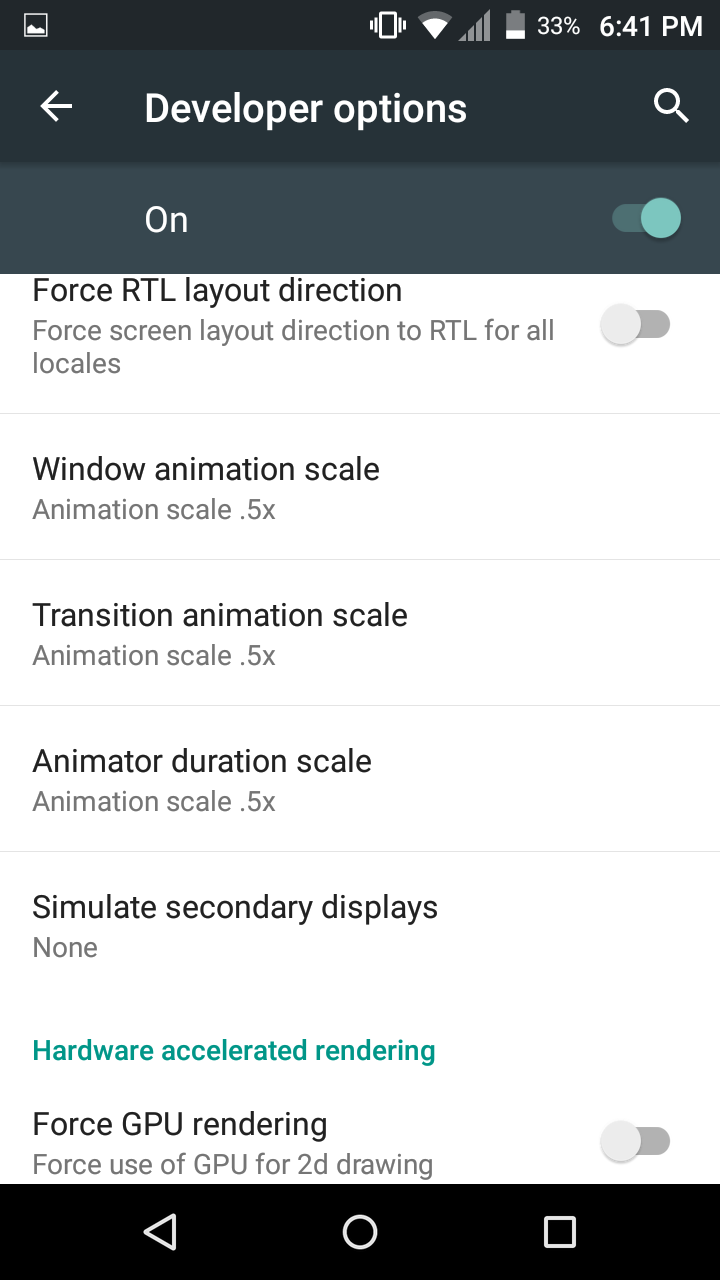 I now have two apps that receive texts and have those lovely notification flags. The messenger bug and fingerprint software aside, I have had no software issues with the phone that would prevent me from using the device in my day to day.

As with many budget friendly devices, Posh had to make sacrifices somewhere to lower the price of the Optima and the performance of the device saw some of the corner cutting. For the first week using the device, I used completely stock settings. While the Optima was usable, I did find it to be a bit slow, and it would stutter through animations occasionally. I decided to try and speed up the phone by enabling developer options and decreasing the animation scale by half. Not only did this speed up the transition between screens, I saw a huge reduction in the stutter between animations as well. 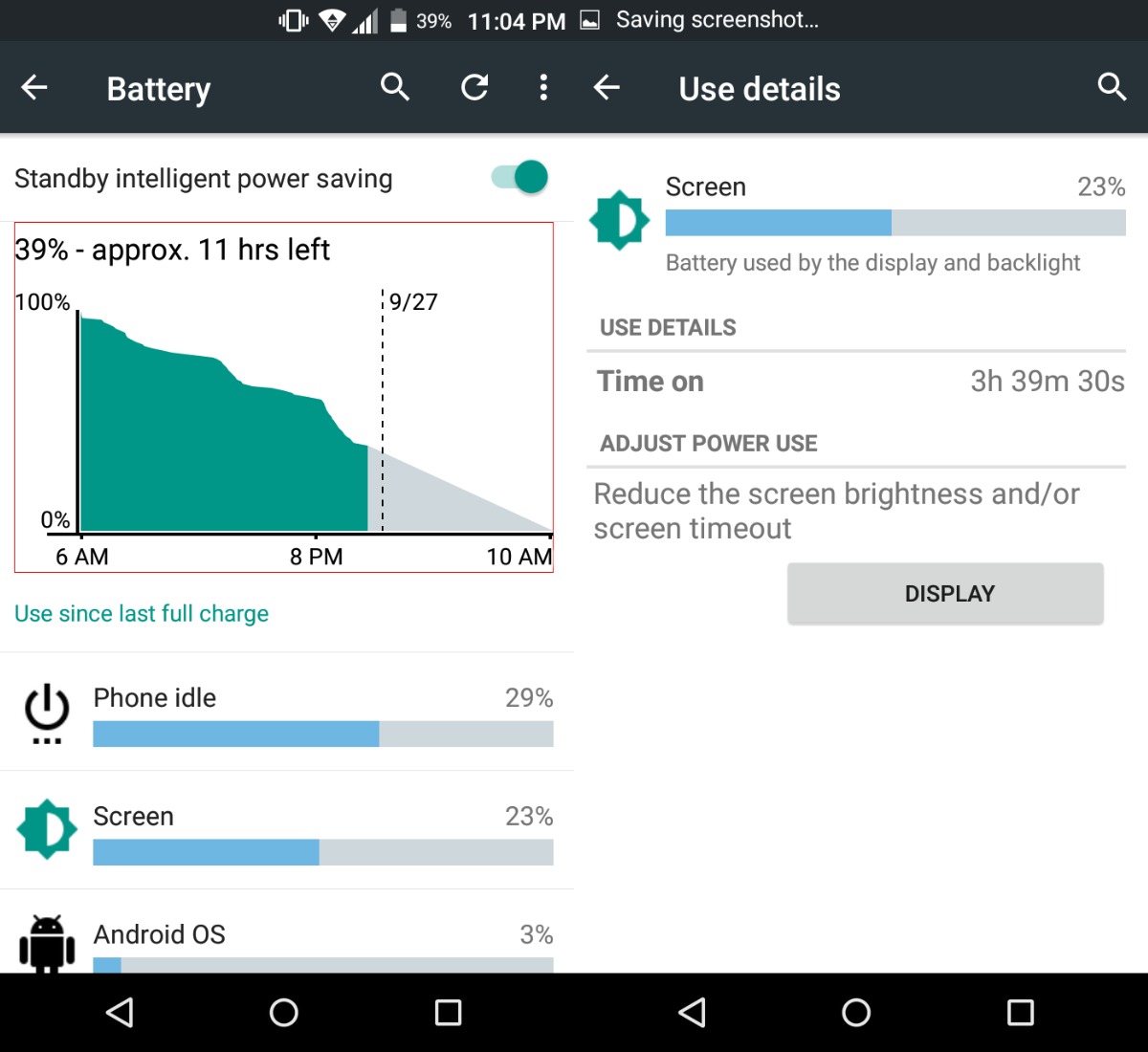 The battery in the Posh Optima LTE L530 is something to write home about. Posh managed to cram a 3000 mAh battery into the Optima L530. This combined with a power-efficient processor, and a smaller screen with a lower resolution allows the device to go for days at a time. I have come to expect 4 hours of screen on time on any given day from the Optima. Unfortunately, there is a small catch to the great battery life. Once you drain the big battery, you will be tied to the wall for 2+ hours to get back to 100%. To include a quick charge feature on the device, while nice, would have raised the price of the Optima. I think excluding it was a smart move on the part of Posh.

The Optima LTE L530 has two 13MP sensors with a 2.2 aperture. The rear of the device has a dual-tone LED flash, while the front only has a single tone LED flash. The Optima can record 1080p video at 30fps, has autofocus on both the front and rear sensors, and HDR capabilities. While these specs are far from the worst out there, they do not produce good pictures. Even with perfect lighting conditions and a steady hand, pictures will be blown out, foggy, and have a soft focus. You will not want to use this camera for more than picture messages, and social media. 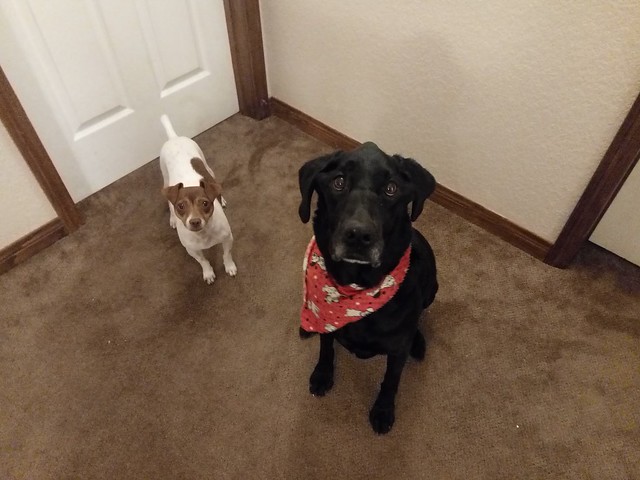 One major criticism I have with the device is the decision to go with Android Lollipop over Android Marshmallow. The L530 was released six or more months after the announcement and release of Android 6.0, and yet it is still running Lollipop. I feel the inclusion of Marshmallow would have improved my experience on the Optima. The fingerprint scanner would have had built-in software support, the great battery life would have gotten even better with Doze, and general functionality of the phone would have improved and gotten smoother. I’m holding out hope that Posh will release a 6.0 update (or jump straight to 7.1), but regardless of what “could have been,” the Optima LTE L530 it is still a good device.

When Posh Mobile sent me the Optima LTE L530, I was expecting to get a “chunk” of plastic with a cell radio inside of it. Instead, I got the pleasure of using a well-designed phone. Posh has built a well-rounded device in the Optima L530. Many budget friendly devices make enormous sacrifices to make one feature on the phone excel, but Posh went a different route with the L530. The phone does well in many categories with a focus on the display, battery and build quality. This winning combination, combined with the $169 price tag on Amazon makes the Posh Mobile LTE L530 a phone well worth your money.