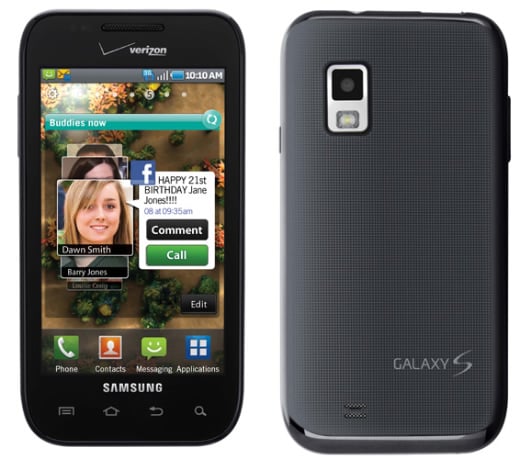 By now you’ve probably seen the reviews of the other Samsung Galaxy S phones — the Epic 4G, Captivate, or Vibrant– or at least gotten an idea of what Samsung’s trying to do with Android 2010.   Up until this now, the non-Droid Android offerings on Big Red’s network have been a little disappointing and quite lacking.  The Fascinate is arguably the first handset that gives something like the Droid X or the Incredible a proper run for its money. This review (which should have been done a while ago I might add) is my honest opinion of a Bing-ified handset I wanted to hate, but actually end up loving.

Overall, the Fascinate represents Samsung’s first serious smartphone in years and their apparent desire to use Android to dominate the U.S. market.  Did Samsung succeed with this handset? Did they nail it? Will this be the first non-Droid Android handset which is actually worth buying on Verizon?  Hit the jump to find out! 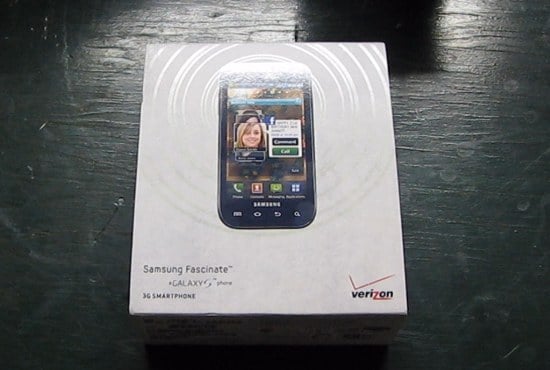 The Fascinate came boxed in a small, square, white box with Verizon and Samsung Galaxy S Logos on it.  Upon first opening, we see the phone on top, and below we have a USB/charger cable, earphones, warranty statement, as well as an instruction manual.  Overall, a pretty much run of the mill packaging, nothing too special. Next, the hardware! 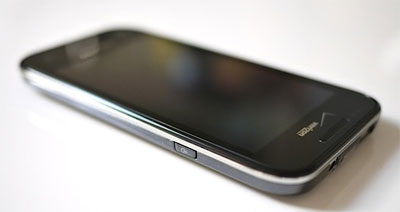 When first holding the Samsung Fascinate, it feels cheap as hell. In all honesty, the phone  feels like and looks like a less than mid-range handset.  Very shiny, and very plasticy. No where close to the build of the G2 or Nexus One.   Overall,  the phone is extremely thin (think the width of little more than a pencil), with metal siding and a  black plastic everywhere.  The lack of no-hard rubber for protection might deter some people.  Inside the device is a 1 GHz Hummingbird processor, a microSD slot expandable to 32GB (it comes with a 16GB card),  proximity and light sensors, and an accelerometer. Additionally, the device packs in WiFi (802.11b/g/n), Bluetooth 2.1, and an AGPS radio. Of course there’s a 3.5mm headphone jack and Micro USB port, but other than that, the phone is fairly run of the mill. No surprises in this speedy little beast.

The Samsung Fascinate features the famous Super AMOLED display.  In my opinion, it is hands down the best display I have ever seen on a smart phone. Absolutely beautiful. It made my Nexus One screen look down right awful.  It was amazing and probably the best thing about this handset.   I should also mention it was the perfect size. Samsung nailed it with the screen. A real slam-dunk!

The camera on the Fascinate seemed just about identical to those found on the Captivate and Vibrant, except for the fact that it’s actually got a flash.  In terms of photo quality, we thought that the Fascinate performed at a very high level.  Photographs came out much better than on my Nexus One and far better than those taken on the HTC Evo.  For still photos, the camera was a major win.

On the video front, I was very impressed with the 720p video quality of the device. This phone is a great replacement for a mini-camcorder.   The video was that good.  Overall, the camera performed very well!

Having had my own opinions about TouchWiz 3.0 before I started the review, I decided I would have an open mind when going into this review. I was going to honestly give TouchWiz 3.0 a shot.  I have to say, besides what my thoughts were, I loved TouchWiz (even if it made my Android phone look like an iPhone).   I found it very user friendly, easy to use, and the widgets were great.  For those who don’t care for it, home replacements can be used, so you are not out of luck if you don’t like it. It was a good experience coming from stock  Android.  It was also much better than HTC Sense in my opinion.

The only real issues I had with TouchWiz was that it was very buggy at times.  Upon starting the phone for the first time, it froze up and I had to factory reset it.  In addition to this, sometimes the screen would just randomly freeeze and not register any touches.  Let’s hope Samsung get’s this cleared up when Froyo hits.

So, yeah, the Fascinate has Bing as it’s main search engine.  All searches are routed through Bing and Google search is essentially cut out. Despite the fact that I don’t really like Bing, I decided to give it a shot.  I have to say the maps work alright, but search was very disappointing.  Search wasn’t good at all actually.   For normal consumers though, Bing will be just fine.  The big issue in my eyes is that there’s no option to switch to Google.  In fact, the only way to change it fully is by rooting your phone. Pretty lame Verizon.  The fact that we weren’t given the option was a total fail.

Phone quality on the Fascinate was really very good, and the volume was very loud and clear.  No caller I spoke to reported any issues whatsoever with the calls.  Everyone said it sounded great.  Great job on this Samsung.

The battery on the Fascinate was definitely better than the Nexus One, but it still died fairly quickly.  Even when the phone was on standby, and I made minimal calls and sent a small amount of texts, the battery died by 6 p.m. and I unplugged it around 8 am.  About 10 hours of life.  Not very long at all. Android really needs to come up with some sort of different multi-tasking solution, what they have now just isn’t working for battery life.   While I can’t confirm this, I also think the screen really sucked down battery life.

Overall, if you don’t mind Bing, this is a great handset with a fantastic screen.  The screen size is just about perfect. The processor and memory are also more than adequate.  It is a very good phone.  I will definitely miss the screen, most of all.   Good news is that a Froyo update is on the way and I am very confident this will get Gingerbread.  So for those  concerned with those types of things, this is great!

In my honest opinion, Samsung succeeded.  This is a great phone that is worth buying on Big Red.  Despite the Bing thing, great job.