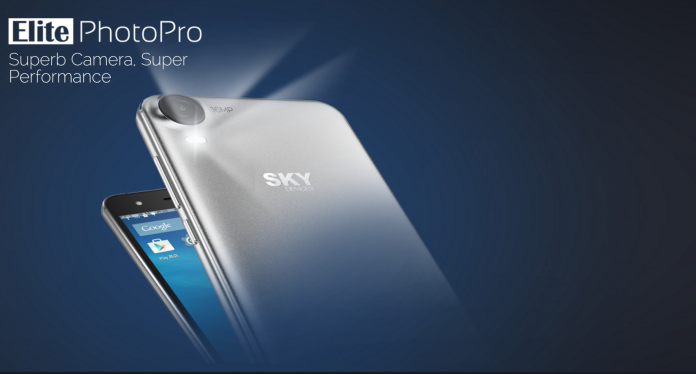 There is an awful lot of publicity recently for the unlocked phone market. And it’s generally well-deserved: the recent flood of good (if not great) devices that can hold their water against the likes of the big boys Samsung, LG, and the Cupertino-based-company-that-shall-not-be-named.

The added draw is that with the death of traditional 2-year service contracts, you as a consumer aren’t tied to a handful of subsidized phone options. Instead, you can pick from a much larger pool of devices, and (generally speaking) if you break, lose, are just aren’t happy with your current ride, you’re only a SIM switch away from a new and different phone.

And the phone makers have responded to this growing market in a huge way. So much so that one manufacturer has already skyrocketed to become the world’s #3. On top of that are several up-and-coming manufacturers who has planted its flag in the market, looking to take its piece of the smartphone pie.

One manufacturer is Sky Devices, who has been selling Android smartphones throughout Latin America, and is now making its move into the U.S. While you would think this sounds like a brand with just a few devices, in fact, they boast 29 different phone models (not to mention 3 smartwatch/wearables).

Recently I was given the opportunity to test drive its finest offering, the Sky Devices Elite Photo Pro. While the initial looks are there, let’s see how this phone fares in the real world as a premium phone offering.

Let’s start with the numbers. With this device you get:

To those up on their smartphone knowledge, these are obviously not top-tier numbers, but I consider myself “tech-frugal”, where there’s a definite value point where specs and price meet. And hey, this device retails for about $150; which leaves you with some breathing room in your day-to-day budget. That said, I believe it’s worth seeing how the phone performs in the hand.

What’s In the Box?

Sky Devices takes good care to set you up right with this phone. In the box you will find:

What’s not in the box, but comes with the phone anyway, is a 2-year warranty from Sky Devices, complete with toll-free assistance direct from the manufacturer.

The Elite Photo Pro is a really good-looking phone right out of the box; sporting a “soft-etch” (my term) back… it’s plastic but hard to tell until you touch it. I was honestly impressed upon viewing & holding it for the first time.  Silver is your only color choice here.

This “soft-etch” gives a good feel to your hand. Around the device, there’s a micro-USB charging port at the bottom, along with a microphone. On the left side, you have both the power & volume up/down buttons. Up top are the 3.5 mm headphone jack and second mic. The right side is clean along its length.

On the front the display is up-front and center; it’s 5″ diagonal with minimal side bezels. 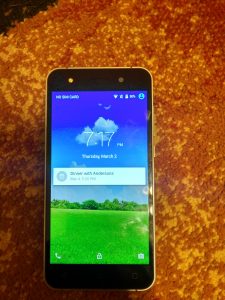 The 720p resolution is OK, but nothing that will blow your mind in terms of detail. The top holds the front-facing camera and notification LED, while the bottom has the now-traditional home, back, and recent app capacitive keys. These keys sit dark until one is touched, then provide a subtle blue illumination to all three. In general, these keys were very responsive, and if you’re an Android veteran you’ll have no problem tracing across the dark keys as they’re right where you’d expect them to be. There’s also a microSD card slot which accepts up to 32 GB of additional storage.

On the back is the camera lens, flash, and single speaker. The lens is given special visual treatment, with a pronounced circular bump-out.

Given the display, visuals are decent but not jaw-dropping. Still, the color saturation is pretty darn good, and overall it performs nothing short of above-average across all functions (Netflix, gaming, general apps, etc.).

Lollipop 5.1. I know, I know; this is more than a generation old at this time. But given the 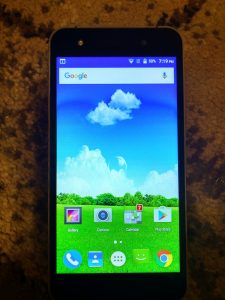 specs, the price point, and the [perceived] target market, there isn’t really anything this phone can’t do for everyday usage. Power Android users may take umbrage to the OS, but what you’re missing is Now on Tap, Doze battery saver, fine tuning of app permissions, and fingerprint login (which this phone doesn’t have anyway). None of these I consider ground-breaking or must-have features, so to me, they’re no big loss.

There is a skin over the stock Android experience here; it reminds me a bit of LG’s flagship devices, with a bit of a cartoon-style look and color scheme. Beyond this, there isn’t a lot of differentiation from the stock Google offering, and I claim this to be a good thing.

One anomaly I found is that the recent-apps button (bottom-right) wants instead to act the same as a long press on the screen, essentially backing you out to see the homescreens and select widgets & wallpapers.

I found performance to be really good given the price. Lag was minimal to non-existent, and switching between apps offered a satisfying small amount of delay and/or stutter; nothing to really write about here.

Here’s this phone’s big claim to fame (or marketing push) is the camera, a 16 MP unit teamed up with a 13 MP selfie shooter. And the phone design really tries to visually emphasize the camera, with a pronounced circular cutout tucked tightly into the upper corner of the body. A single flash unit sits just below.

Real-world test shots were mixed. In good light the camera performed well, getting all the contrast and colors one would expect. But when the light levels dimmed, it had some trouble keeping up. And in darker interior environments the Elite Photo Pro struggled some, with quite a bit of noise and greatly reduced contrast capabilities.

Given that this is obviously the most-hyped feature of this device, I was somewhat disappointed by the performance. My personal holy grail of smartphones is to find one that doesn’t go all-out on all the specs but does focus on a truly industry-leading camera experience while providing a better cost value to the consumer. The Elite Photo Pro certainly wants to be this but doesn’t quite get there.

One other niggle is that the lens sits so very close to the edge and corner of the phone body, that it becomes entirely too easy to let your finger obscure a portion of your photos. I had to devise a non-traditional way (to me) of holding the device for photography purposes.

Ok, let’s go full-circle here. The Sky Devices Elite Photo Pro retails for $150; meaning you could literally buy 4 or more of these for the price of one mainstream flagship phone. So we have to keep our expectations in check here.

For the money spent, you get a very nice frame & body, a pretty good display, almost stock Android, decent storage and RAM (what would have been industry-leading a couple of years ago), a pretty good camera, some nice accessories, and enough money left in the bank to tackle some of other life’s challenges and opportunities.

So overall, I have to say I really like the Sky Devices Elite Photo Pro phone. If you are looking for a more-than-OK Android device and don’t want to spend upwards of $1,000 on something that will irrelevant two years from now, or if you have family members looking for good Android of their own, I do recommend this device.

You can purchase the Elite Photo Pro from the likes of Amazon, or directly from the Sky Devices website.