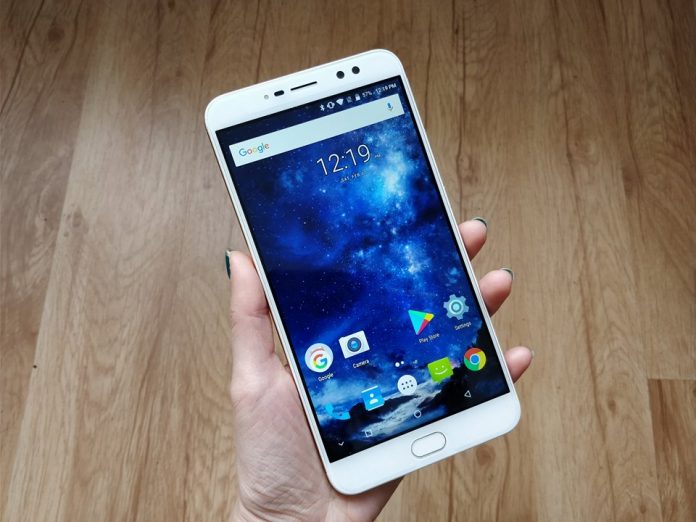 China has been rapidly taking the phone world by storm, seriously undermining its Western and Korean rivals with powerful devices sold at affordable prices.

Chinese tech products used to get a bad rep, often being labeled as fakes, clones or just sub-par imitations. But the comparison wasn’t always warranted. Today things have gone through a sea of change, as more and more promising companies keep springing up like mushrooms after the rain.

OPPO, Xiaomi or ZTE have been pumping out well-specced handsets at low prices for years, but a new wave of smaller brands has also attracted some attention. Companies like Bluboo, UMIDIGI or Doogee might not be household names yet, but they are beginning to leave their mark on their industry.

It’s also the case of UHANS, a young Chinese brand that’s trying to make a name for itself. Since it was founded in 2014, the company has released a few smartphone models including the Max 2 which I recently spent a few weeks with.

Phones seem to be constantly growing in size, so phablets aren’t quite as distinctive as they used to be. But a metal giant of 6.44-inches still has the effect of drawing at least some attention to it, right? Enter the UHANS Max and its larger than life persona. 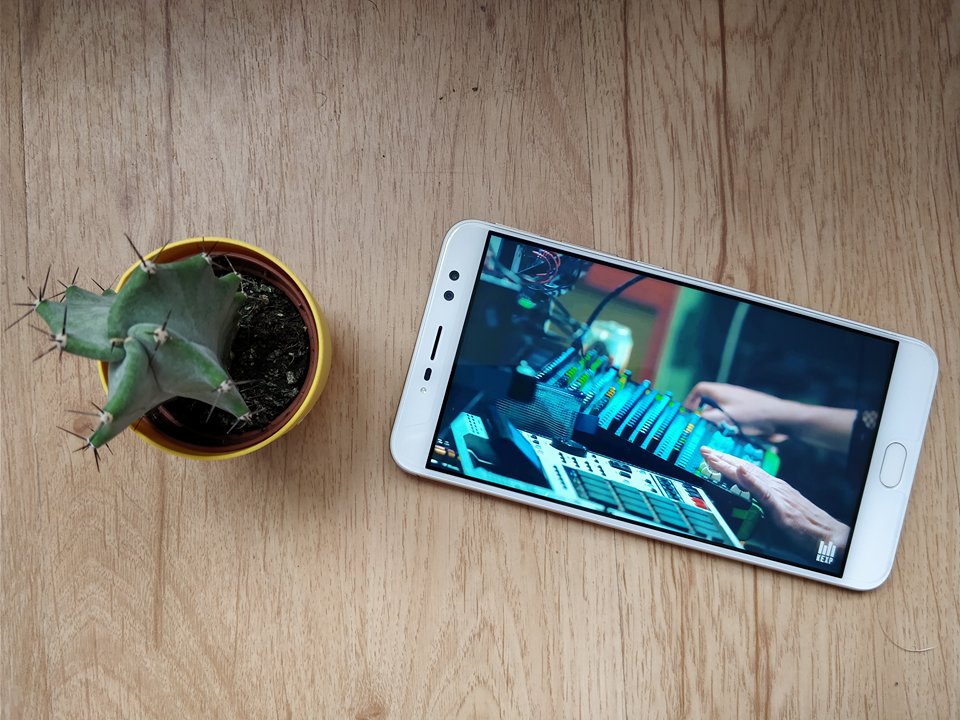 UHANS is a small company, but you wouldn’t necessarily think so when looking at the packaging. Our review unit came in a visually appealing, minimalist dark blue box with the UHANS logo placed discreetly in the top left corner.

Take the lid off and you’ll be confronted with the Max 2 – the whole 6.44-inches of it. Yes, it’s a big phone indeed – the classic kind. Unlike many handsets launching today, the Max 2 does not have a bezel-less display nor does it benefit from the modern 18:9 aspect ratio.

It’s pretty standard in this respect: it boasts relatively slim side bezels, but the chin and forehead are very prominent. It has a physical home button which also doubles as a fingerprint scanner and on-screen buttons to help with navigation.

Because I have smaller hands, holding the Max 2 was a bit awkward for me. Its size is definitely a bit over the top while I’m concerned, but that’s not to say I’m labeling it as unusable. Far from it, I’m just saying it takes some time getting used it.

I liked the fact that for such an affordable phone, the UHANS Max 2 boasts a sturdy metal back, although the top and bottom are made of plastic for some reason. As a result, the phone is not too slippery and is not a magnet for icky fingerprints either which is always nice to have (although a lot of people use a case with their phone). 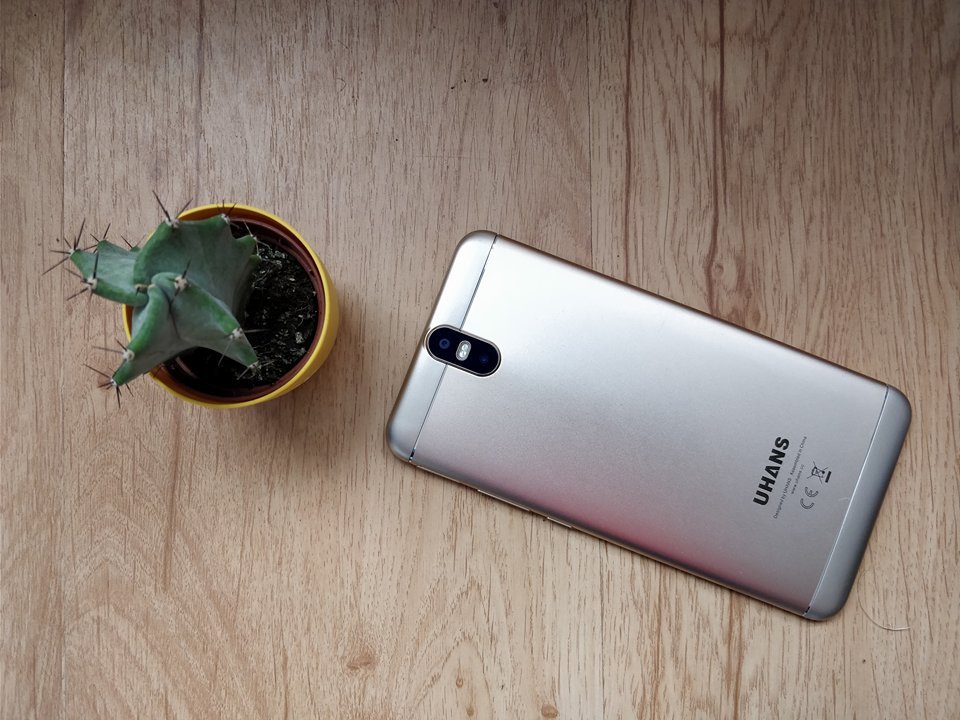 I’m not too crazy about the dual-camera arrangement on the back. It looked pretty decent in the promo pictures I’ve seen, but in person, it’s quite unaesthetic with the flash awkwardly positioned between the two sensors. What’s more, the camera bump is quite prominent, so you need to be extra careful when placing the device flat on a surface to avoid the camera glass getting scratched.

On the front side, you’ll notice the notification LED and a second dual-camera arrangement. There aren’t many phones with dual selfie cameras out there and the Max 2 is one of them. More on picture quality later on in this review.

At the bottom, you’ll find two speakers and a microUSB port in-between, while the power button, volume rocker, and dual SIM card slot live on the right side. The left side has been left clean and unadorned. The top side is home to the 3.5mm headphone jack, so yes you can use your favorite pair of headphones with the phone. 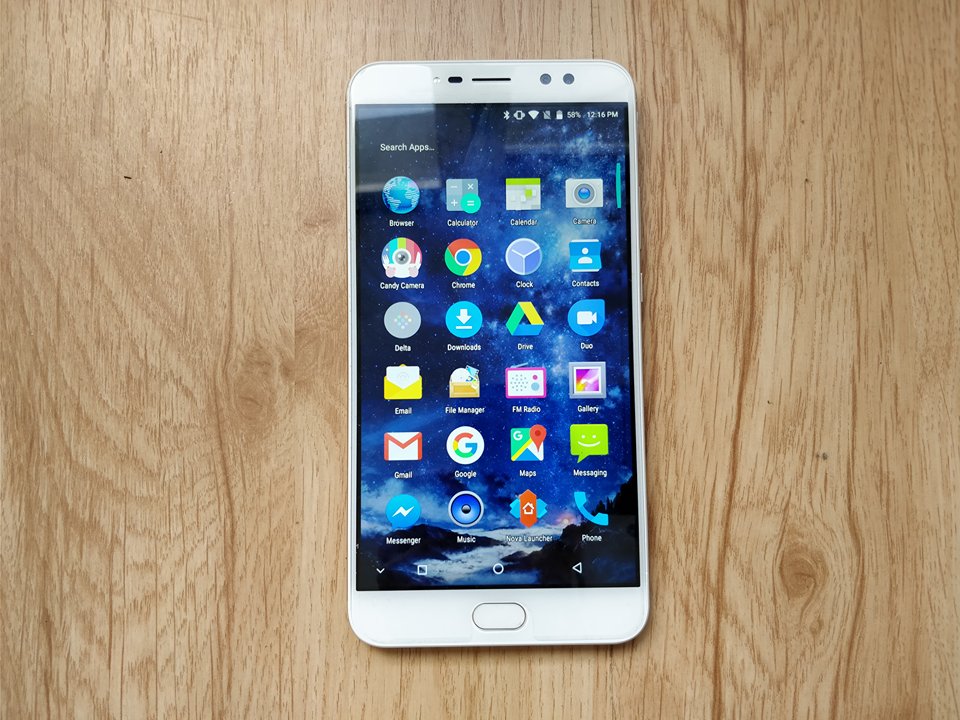 The screen on the UHANS Max 2 is pretty decent, but will definitely not wow you. The phablet features fullHD resolution (1920 x 1080 pixels) which is enough to produce clear and crisp images. I found the colors to be a bit faded out, but fortunately, you can access the MiraVision tool (in Settings) and adjust various parameters including contrast, saturation, and picture brightness. There’s a Vivid mode for those who like me, prefer brighter colors.

There’s also an Adaptive brightness tool, which once toggled on can optimize the brightness level for available light.

That being said, the Max 2’s display visibility in broad daylight is alright but granted, it’s winter here and most days are pretty gloomy and dark, so I haven’t had much chance to use the phone in bright sunshine.

The UHANS Max 2 comes equipped with a MediaTek MT6750T processor clocked at 1.5GHz with Mali-T860 GPU and backed up by 4GB of RAM and 64GB of expandable storage (microSD card slot available).

This configuration is enough to sustain most of my daily activities including reading emails and articles, browsing social media, chatting, playing a few games, talking on the phone and watching a video or two on YouTube. Yes, given its large size, the phablet is perfect for watching all kinds of video on it.

Navigation in most cases was pretty smooth, although I had the phone freeze in a few instances when I was trying to switch between apps rapidly. Fortunately, it wasn’t long before things returned back to normal. As a side note here, I also noticed the phone is extremely slow to reboot or start, which can be quite annoying especially when you’re in a hurry to do something.

The phone comes with a pretty stock version of Android 7.0 Nougat on board and doesn’t include any bloatware. The icons could use a re-design, but sadly there’s no built-in option to allow you to tinker with them a little bit. Fortunately, you can always install an icon pack or third-party launcher. There’s also an app drawer – if you’re into that.

The Android on board of the Max 2 is pretty bare, so you’re not given a lot of extra options.

I never used a dual-selfie camera before and well, the results were quite intriguing. In broad daylight, the selfies came out extremely detailed (see galleries).

If you’re skittish about your imperfections shining through the good news is that the selfie camera has a few beautifying modes including skin smoothing, face slimming, skin whitening and…enlarging eyes – for those who want to get freaky.

You also get a bit of bokeh on your selfies, which as you probably know is not a feature normally offered by most smartphones.

You can achieve the bokeh effect by using the main camera set as well, but sometimes the software goes crazy and ruins the background blur. In some cases, it seemed like the camera was trying to apply a “pixelated” effect instead of bokeh.

Sure, some shots came up looking pretty nice. But as is the case with most budget phones, you need good light and a steady hand to get decent results. Even so, colors seem quite washed out. The UHANS Max 2 is also a bit slow to focus. Snapping pictures in low light yields standard grainy results. No surprises here.

AT&T’s 3G network is the only solution for those who really want to give this big monster a go in the US.

No, you won’t win any photography contests with the UHANS Max 2. But, under the right conditions, you can actually get some pretty nice shots to show your friends.

The UHANS Max 2 is powered by a 4,300 mAh battery which takes a lot to recharge. There’s no fast charging here, so be prepared to wait a while for the phone to fill up.

Once full, the phone’s battery life runs out pretty quickly. Playing intensive games, snapping pictures, talking on the phone and exchanging messages on WhatsApp drained the device well before my bedtime.

Since I’m located in Eastern Europe, I could use the UHANS Max 2 on a 4G network without a problem. But given that the Max 2 was not meant for the US, it won’t work on most networks in the country. AT&T’s 3G network is the only solution for those who really want to give this big monster a go in the US.

In case you’re wondering, phone call quality was quite ok. I did not experience any interruptions, the sound was clear and loud enough.

Priced at around $164, the UHANS Max 2 is a recommended purchase for those who want a phone for media consumption. The big screen is perfect for watching videos on YouTube or Netflix, but it’s also great for navigation when driving. Bonus: it has a sturdy metal back that looks pretty nice (save for the awkward dual camera).

Unfortunately, US customers won’t be able to use for anything more than a portable media player or gaming device. This is okay, though, if you have consistent Wi-Fi at your disposal. But, if you go off the grid, the phone becomes just a device you can take some average photos with.

Don’t have Portrait Mode on your Android? Use these apps instead