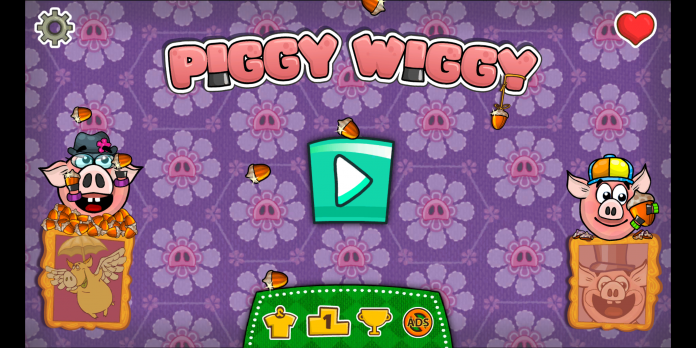 There have been a lot of physics-type mobile games that have gone on to huge success in the market. From Angry Birds, to Cut The Rope, to Chalk Ball…these are houlehold names these days. The best-known ones provide a unique twist, mechanic, or other feature that the masses gravitated to, and millions of downloads later these titles have become 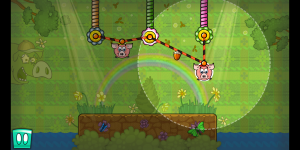 Following on these success stories, there are plenty of titles now in the Play Store. One such title is Piggy Wiggy, a family-friendly physics-type puzzle game from the developer Qaibo Games that follows the Cut The Rope style of game mechanic. Let’s take a look at how this game tries to pull you in.

How to describe the idea of Piggy Wiggy? Each level gives you a combination of pigs & acorns. The goal for each level is to move the pigs around the screen to gobble up all shown acorns….doing so in either the fewest moves and/or the most creative way maximizes your points for that level. 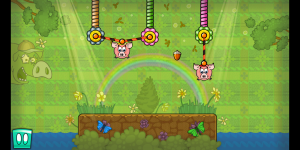 To help with your goal, each level is also loaded with a combination of pulleys, hinges, platforms, plates, and explosive balloons. Each combination of these items can provide you with a multitude of ways to solve the acorn-eating puzzle (particularly so in the later levels)

To get started with Piggy Wiggy, download the game from Google Play. Once installed, simply open and off you go. There aren’t any settings to fiddle with, save for toggling the sound effects and background music on & off. 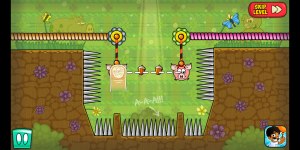 From there it’s pretty standard puzzler fare. At first you’re presented a few ‘tutorial’-style levels where the developer provides direction on how to play with simple animations, in lieu of on-screen text.

You play by using your finger to identify a connecting “pulley”. From here you swipe to the piggy of your choice, stretching a band that connects the piggy to said pulley. This launches the piggy towards the pulley in a physics-based arc. In the beginning this in enough to collect (eat) the acorns in between; but as the levels get harder you start using these bands to swing piggies into other objects/tools to set up, and then engage the movements that will complete the level.

As you progress in the game, more and more challenging puzzles emerge, including sequential moves that are required to collect all acorns. These can include various tools such as boulders, popping (exploding?) bubbles, and rail cars that can be slid as-needed to place your piggies right where they need to be.
The visuals and sound effects are clean and colorful; though the constant intermittent oinking gets on the nerves after a while.

Piggy Wiggy is a pretty simple game, and one that is safe for all ages. It’s a title you can have on your device, and feel OK with your little ones picking up and playing. Not only is it safe for their age, but it also can be pretty easy for them to figure out and progress through.

There really isn’t anything to improve, per se. The problem is that this genre of game has been done a whole lot of times before already. And while fairly polished, smooth, and well-thought-out, Piggy Wiggy doesn’t really give you any new, clever, or otherwise unique angle to make you want to play the game….or play it above any of the other established titles in the genre. It’s just, there. It does what it does well, but it’s also pretty forgettable once you put it down.