I’m guessing that you have not played a game of pinball in a good long while. Let alone thought about pinball, for that matter. For a brief moment in your life, this quarter-played arcade staple was a daily calling….right up until more important things took over (cars, 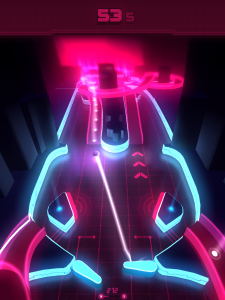 boys, girls, boys and girls, whatever).

While you may not have been thinking about it, there is a game in the Play Store that may be worth considering. PinOut, from the developer Mediocre, has brought a fun, lively, family-friendly mobile version of pinball to Android devices everywhere.

One of the best things about PinOut is Mediocre has kept the formula much the same: it’s very easy to get in, have some great fun, and then get out. Not a lot of setup or settings to tweak. Just download PinOut from the Play Store and you’re set.

Opening up the game is a snap after downloading it. The game takes you right into the start screen, where a play button awaits. For settings, there’s really only adjusting the quality level of the graphics (for any devices that struggle to keep up). 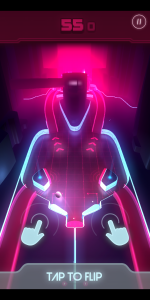 Starting out you are given the shortest tutorial ever; but this is fine, as it’s pinball. You are shown that you activate a flipper by tapping the corresponding side of the screen (left or right….doesn’t matter how high or low on the screen you tap). And you’re off.

As for controls, you just read about them. It’s just like Pinball, in that you are controlling left and right flippers. One difference is you don’t have the ball-launching spring catapult you’d have in the physical machine….the ball just comes dropping down nice and soft; ready for you to strike it.

The game is timed; that is there is an omnipresent countdown timer at the top. If it gets to zero, your game is over. You can stretch this time by striking your ball down particular “add time” rails (similar to “checkpoints” in driving games).

PinOut is presented in a never-ending road style, Your goal is to simply go as far as possible before your clock finally runs down. In the interim you can get special bonus items, some of which you can choose from; like a “bullet-time” feature that slows the timer down for a while, or an option to freeze time for a particular number of paddle flips (I loved this one; almost giggled whenever I got it while playing).

PinOut has no storylines to follow, no plot, no setup, no backstory. It’s just you, the ball, 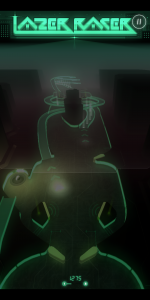 the clock, and a seemingly endless supply of boards to clear.
There’s even a side-game to play when you hit certain spots, called Lazer Racer. Using the “scoreboard” portion of the game display, you play a Frogger-style dodging game, trying to beat your best record. It’s not much but it is a cute diversion.

An obvious point of marketing for PinOut is its graphics style. It’s a combination of Tron-style and retro groove, using strong colors against dark backgrounds. It does a great job of being aggressive without being garish or hard on the eyes, allowing you to play for longer periods without fatigue.

Paired with the great graphics is a cool, mellow, retro-arcade soundtrack that moves you right along with the endless-road presentation. The music, for me, never takes over or gets in the way of gameplay. It just sort of fits-in, and this is a high compliment for game music, nowadays.

For an easy, challenging but chill, kid-friendly game, I highly, highly recommend PinOut on your device. It’s both easy to pick up and put down; then just as easy to pick up again. It offers a short-term arcade respite from your real-world stresses, while still being a truly quality title to have in your library.

Up for review here is the Trifo Lucy robot vacuum cleaner. Learn more about its features, capabilities, and more.
Read more

Logitech has recently unveiled its new product, the Lift Vertical Ergonomic Mouse. It features Bluetooth connectivity between up to three devices at...
Read more

If you have a business you should have a website that allows you to connect with your audience and keep them updated...
Read more

We spend a large segment of our day looking at screens. Be it a computer monitor, laptop, phone, tablet, TV, or even...
Read more

Blurams Dome Lite 2: The $50 pan and tilt camera for the masses?

Building up a smart home doesn't have to be an expensive endeavor, even if you're dealing with security. Indeed, you don't have...
Read more