Pixel Kingdom has the ability to ensnare you in three ways: if you love pixels, if you love knights or wizards, or if you love great gameplay in a mobile format. I love all three of these things so Pixel Kingdom made it high on my list of need-to-play mobile games. 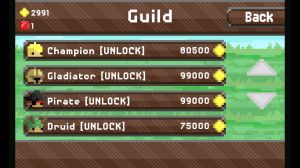 Pixel Kingdom is very similar to Swords and Soldiers albeit with a little more freemium and a little less graphics. On the left side of the screen, you have your own knights, warriors, archers, and wizards that you pit against ghouls, goblins, gremlins, and zombies on the right. You send your army through three horizontal lanes against the other side to slowly drain their health until you can bring it to 0. You do not have to mine your own gold as you battle because you gain money by the second instead of by killing enemies or owning farms or mines. You can speed up your gold gathering by spending the gold in a research-like way during battle, and you face the choice of increasing your gold production or sending another warrior to fight in the face over an overwhelming horde.

At first, you are given an archer, a warrior, and a rogue. After a few games, you can use your gold to buy characters like a wizard, a cleric, a necromancer, and a pirate. The levels seem infinite and the monsters various, and the health of the enemy base increases as you progress in the game. You can gain more money by sending your troops into a lane with a treasure chest, and you gain gems by beating certain levels.

With more money and gems comes more characters and upgrades.  While it would be great to pit an engineer character that costs 75,000 coins against a flying skeleton, there’s no real incentive to buy these extremely expensive characters aside from the in-game achievements.

Per battle, you gain only a few hundred coins, but a paladin will cost you 22,000 and the highest character, a gladiator or pirate, will cost you 99,000. These exorbitant costs, along with the fact that the higher level characters will not add much more than the average characters you begin with, make you wonder why are there extra characters? This is where the freemium model comes in to play.

Luckily, you are not bombarded with ads, and you never feel that it is necessary to buy anything, but I would have liked to seen these characters add depth to the gameplay instead of merely being extra characters.

[pullquote2 quotes=”true” align=”center” variation=”mossgreen” textColor=”#3062b8″] it is nice to take a second to appreciate how handmade the visuals really look.[/pullquote2]

Pixel Kingdom looks and plays great. There are a few different background vistas that play in the background (woods, mountains, caves, rain, etc.), and it is nice to take a second to appreciate how handmade the visuals really look. You can see the careful placement of each pixel that created the monsters attacking you.

Pixel Kingdom also has a few extra features. It includes achievements and trophies for your accomplishments. While these are not Google Play Games compatible, they give you the same sense of accomplishment, and they could easily be incorporated into the new service. You are also able to level up your characters outside of battle, and instead of boss battles, Pixel Kingdom throws dragons at you as enemies in the middle of a fight.

The gameplay of Pixel Kingdom is not as varied as Swords and Soldiers, but it does mimic the childishly wonderful graphics and offers random monsters and backgrounds to play through. I would like to see deeper strategies develop for the enemy AI and a few more worthwhile characters to use in combat, but Pixel Kingdom delivers an RPG-like leveling system with a few extra stat-boosting items at the merchant. A lapse in judgment or a loss of attention can quickly bring the horned turtles and witches down on top of you.