I do not have a great description for this game, and the title was alliteration for alliteration’s sake, but I can tell you that PUK is an addicting pick-up-and-play game.  And those are the best kinds of mobile games. 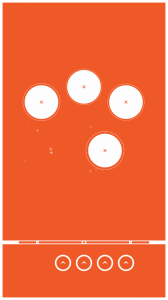 PUK bills itself as an action puzzler, but I do not think that is quite right.  It is like air hockey, skeeball, and pool mixed into one absorbing game.  It is an amalgamation of gameplay types; a hockey puck that you fling at portals to remove them from the screen so that you can advance to the next level. Except, there are no levels really.

PUK levels are randomly generated, and you cannot save your progress or return to a previously played level.  Each play through is unique, fast paced, and difficult – and you will likely not see it again for a long time.  Since each level is randomly generated, I do not see the need to go back to one specific level, but many reviewers on the Play store are clamoring for progression saving.

The gameplay of PUK is marvelously simple.  You have a set number of pucks (from one to six or seven) at the bottom of your screen.  With your finger, you slide the pucks down to choose at what angle and with what speed at which you want to launch them towards the portals above.

The game turns nasty after a few easy warm-up levels.  From a faster timer (have I mentioned that yet?) to barriers trying to keep your pucks from reaching the portals, PUK ceaselessly adds difficulty to your puck-flinging journey. There is only one inconvenience, and it is a little specific to certain devices, but on my Galaxy Note 2, when I pull a puck down to fling it, I hit the capacitative back button more often than I would like.  It merely pauses the game, which may be beneficial, but it can also throw off your rhythm and timing.  There are also some vagueries too like why do you get medals (new completed levels I assume since there 1,000 of both) and when the timer bar expires (it is difficult at first glance to see when it will expire).

PUK is a great mobile game.  You can play it for short spurts to try to get a few medals, or you can play for an hour trying to beat your high score.  I think the developers could add some settings to mix things up like colors, a progression saving option, and a more-helpful guide, but these are minor details for an addicting, fast-paced game.  PUK is simple, quick, and addictive – the trifecta for mobile games.