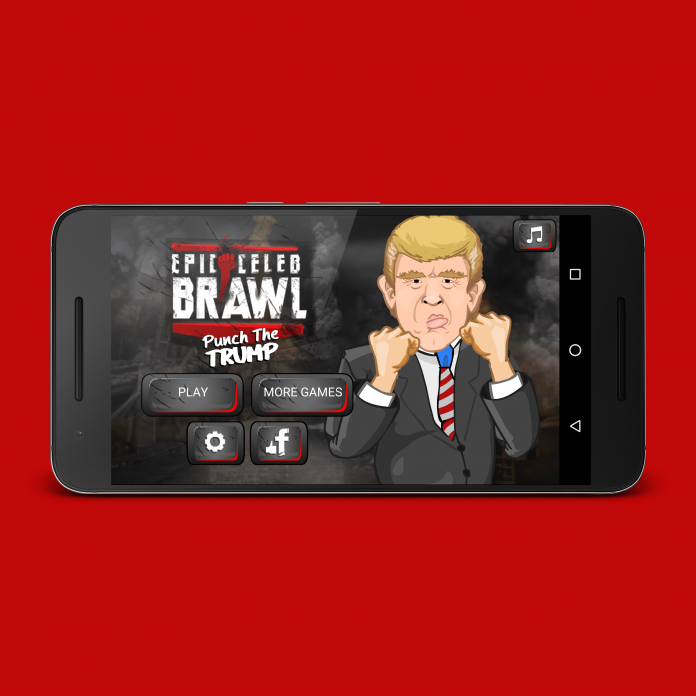 Presidential elections in the United States are a big deal. Every country in the world is closely looking at candidates and major events, and then offer special coverage in the much-awaited day. Without doubt, Donald Trump is the most controversial candidates I have seen. The fact that there’s a game that lets you beat him to death is a clear indicator of it. Punch the Trump, made by Brutal Studio, tries to jump on the media’s hatred towards this peculiar character, but the result is not a great one at all.

After downloading the game, the app welcomed me with the most frightening message I’ve come across in the Play Store:

“Thank you for downloading our application using the AppJolt network.

In order to enhance your mobile experience, you may receive survey questionnaires and advertisements when uninstalling and updating our application and certain other applications on your device.

I immediately pressed Cancel instead, which (I hope) didn’t start that helpful service that would have surely enhanced my mobile experience.

Anyways, after that rough start, you’ll get to the app’s main screen. You’ll have the option to start playing, configure a couple of settings, like the developer’s page on Facebook, and check out more games. There’s also a very cartoony Donald Trump at the side, boasting a very aggressive stance. Usually, when opening the app again, you’ll get a full-screen video ad – just because.

One of the selling points of the app is that the developer added phrases used frequently by Trump himself. When pressing Play, he’ll actually say “It’s disgusting” which I found hilarious.

After this joke, the logical next step would be to start the fight itself, right? However, the app will ask you to rate it first, and will give you free belts in return (explained in a bit). It’s understandable that a developer would want his app rated, but it makes no sense to ask users before beginning a game.

Even worse, there’s no way of saying no (or at least not now), just an arrow that will take you to the in-game store. Exiting the store will NOT take you to the game, but rather to a main screen that looks different from the one we just saw. I’m dead serious.

There’s a button that says “Fight!” here (while the first main screen says “Play”) that will finally take you to the fight itself. There are five buttons are your disposal, placed at the bottom of your screen. The ones at the edges perform a light attack, while the two contiguous ones perform a strong one. The center one is reserved for blocking.

Your character is placed in a first-person perspective facing Trump, and there’s a HUD similar to what you’ll see in any fighting game, with your and your opponent’s remaining HP, and a pause button.

Similar to more robust fighting games, you can perform combos that will deal more damage. If you pause the game, you’ll find a button that will not take you to a list of combos, but rather redirect you to a website where you can see said list.

From time to time, Donald Trump will enter Rage Mode, in which his eyes will turn to dollar signs and he’ll punch like crazy. You will need to block in order to survive it. Also, the background will turn into a US flag, the music will change, and Donald Trump will say his famous line “You’re fired.” It makes fights a little less monotonous and it’s fun to watch at first.

For those of you who like Mortal Kombat, there’s a “Finish him” prompt, in which you have to do a combination of attacks (which, fortunately, are shown on the screen). If you execute it successfully and on time, Donald Trump will be shot by a cartoon Barack Obama. A little bit of dark humor here, but you shouldn’t take offense by it.

When winning a game, you will earn belts, which can be used to buy in-game items. These belts can also be bought with real money. Things like bats, machetes and shurikens are available for purchase. Unfortunately, scrolling through these items is an absolute pain because of a flawed implementation that makes the items jump all over the place when scrolling through it.

Fights against Trump are mildly entertaining at first, but that’s it. Sure, punching a fake Donald Trump may sound appealing to some people, but the novelty wears out really fast when you analyze the game beyond that. Fights are essentially the same every time, making it really boring after some rounds.

Nevertheless, I want to remark the fact that the game has combos that work great. The developer could have aimed for something less complicated, but chose to add combos to spice things up, so kudos.

That’s where the praise stops, however. The game has so many flaws, bugs and performance issues that it opens up the eternal dialogue about Google’s lenient approach towards app distribution inside the Play Store.

Apart from the issues discussed previously, the game does not perform well at all. Half the time (and I’m not exaggerating), the game just freezes while fighting. There is both lag and frame drops in every single fight I’ve had. When quitting the game, it forgets to enable screen timeout again, so my phone just sits there with the screen on forever. I once paused the game while on rage mode, and, when finished, Trump kept repeating his dialogue over and over.

To improve its replay value a little bit, the developer added the belt mechanic, but since these items are used on fights only, it doesn’t do much to improve the game’s replayability. Also, you get a score at the end of each fight. However, there’s no Google Play Games integration or similar, so you can’t actually compare your score with anyone.

In a surprising move, the developer added several options to control the game’s graphic quality. It’s really peculiar, since the game shouldn’t tax your phone’s GPU at all, but it’s nice to have the option anyway.

Also, the game doesn’t rely on automatic language detection to configure itself, but at least lets you change the interface to your preferred choice. You can also turn on or off both the music and the sound effects.

Even though the interface is not good at all, fighting itself does not look bad. The Donald Trump character is adequate and the game’s rendition of Barack Obama, and the context he appears in, is comical. However, the interface before fighting looks bad, the scroll is hilariously flawed, and there are inconsistencies in several instances.

Sound effects are acceptable too, and the fact that the developer added phrases said by the real Trump is rather cool. However, some of them are low quality, so they don’t sound as sharp as they should.

I understand that app development is hard. I also understand the need to monetize your efforts. However, this game could have been much better if more effort was put into it. In its current state, it’s difficult to recommend it, especially with its insane amount of bugs and performance issues, invasive ad networks being used, and poor fun factor. There are better fighting games in the Play Store. Sure, they won’t let you punch Donald Trump (which may sound appealing to some of you), but they offer a more refined, pleasant experience.

Download and install from the Google Play Store (if you dare).

Power Rangers: Legacy Wars – Galactic witch Rita Repulsa is back and has to be stopped (Review)

Political Run campaigns for your votes in the Play Store