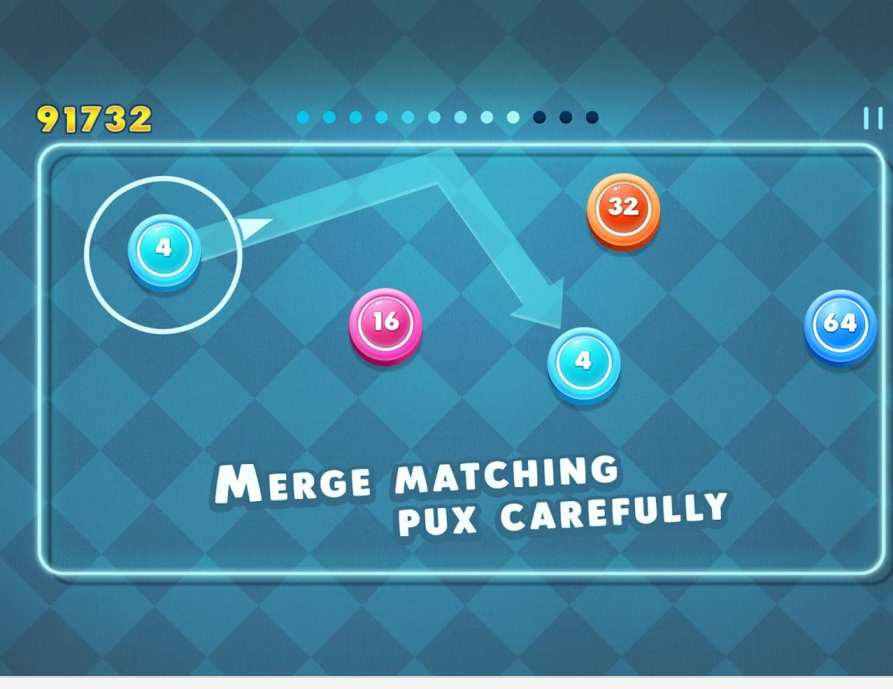 At risk of sounding utterly cliche, Puxers is a game that’s easy to pick up, but hard to master. You flick numbered pucks around an arena, colliding like-numbered pucks with one another. When these pucks collide, they transform into the sum of those numbers. You may have no more than 12 pucks on the board at a time – any more, and you lose.

Beyond the standard Google Play login, there’s not much to do as far as setup for this app goes. I’d highly recommend viewing the tutorial slides, which you access by tapping on the stylized ‘?’ on the right side of the screen.

Puxers is relatively simple, but at the same time challenging and strategic. I fell in love with it very quickly. The graphics are cute and arcadey, with sounds to match,  and the game itself runs very smoothly. Pucks range in scale by powers of 2, from 2 to 8192. By colliding like numbers, you create a numbered puck that equals the sum of the two you collided. For example, colliding two 8-pucks results in a 16-puck, two 16-pucks yields a 32-puck, etc. At some point – I believe it is when the number reaches 8192, the puck simply turns into a star and leaves the field. As you accumulate numbers, your score goes up.

The kicker, however, is that if you accumulate twelve pucks on the board and fail to clear one, you lose. Game over. This is where the game’s only in-app-purchase comes into play; if you lose, you are able to Undo your last move by paying $0.99. In between games you’ll often encounter long, video-based ads that can be skipped in a few seconds, which will then direct you to a Play Store download link. A small inconvenience, but inconvenient nonetheless.

If you like simple, challenging puzzlers, this game is for you. Great quality of product, a simple game mechanic, and a real sense of accomplishment when you beat your score should make this game a hit if it gains traction.