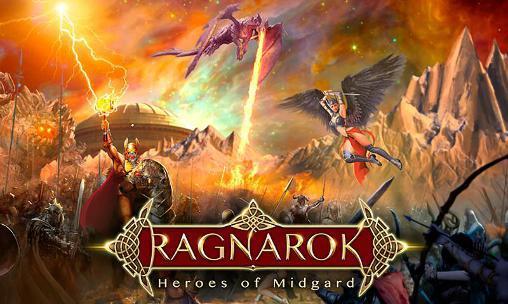 Ragnarok: Heroes of Midgard is a free-to-play card collecting/RPG game that has a lot of potential, but also a lot of faults.

Cost: Free (with micro-transactions and ads)

Ragnarok: Heroes of Midgard is an interesting game, to say the least. It’s a sort of card game/RPG hybrid with characters based off of Norse mythology and fantasy. The game features card collecting, exploration and battling with a team of characters – sounds great, right? Unfortunately, Ragnarok doesn’t exactly do any of these things in an outstanding way.

The story of the game is essentially Loki, the Norse god of Mischief, is up to no good and you need to stop his evil deeds across the realms of Asgard. The game takes some liberties with Norse lore, but it isn’t the worst premise.

The game is similar in style to other popular mobile games like Brave Frontier, where you collect characters of varying rarity and power, put them in a team, and fight in automatic battles. Ragnarok uses cards instead of characters, with admittedly nice art on them, which you collect from the field of battle and from the environment. You can summon cards using in-game currency and real money, as well as upgrade and fuse them together to get more powerful units. Once you get the cards, however, the game takes a sharp drop in fun.

Where a game like Brave Frontier has Final Fantasy-style animated battles with interesting effects and some degree of interactivity, Ragnarok does not. Battles in Ragnarok boil down to two parties bumping into each other with little to no animation, and just some numbers popping up.

The battles last about 2-10 seconds at most, and sometimes you don’t even know what happened until the win/loss screen appears. I wish they had sprung for animations, or added some strategy to the mix, letting you pick which cards attack when, or maybe add some ability to launch special attacks. The game just doesn’t give the player much to do besides tap one button and watch.

The same can be said of exploration, which consists of tapping the “explore” button and watching a little animation over and over until something happens. Occasionally a battle will crop up, or a cut-scene detailing the story will occur, but they are not very frequent, making exploration become tedious at times.

There are other modes to play as well, including an arena mode, where you can battle your party against others. A guild feature is also available, in which you can create and join teams with other players or friends. These modes are fine, but the arena is just more of the same boring battles.

Also, the app has a weird issue where it installs two different icons. Worst of all, one works and the other doesn’t. Confusing and frustrating for sure.

Overall, I was disappointed with Ragnarok: Heroes of Midgard. It has a lot of promise and a bunch of content to work with, but the gameplay itself, coupled with the bevy of superior games available in the same genre for the same price, make this game a hard sell. If you’re looking for a decent game to pick up and play for a time waster, or if you need that collectible free-to-play card game/RPG fix, you could certainly do worse, but also a lot better.

Download and install Ragnarok: Heroes of Midgard from the Google Play Store.