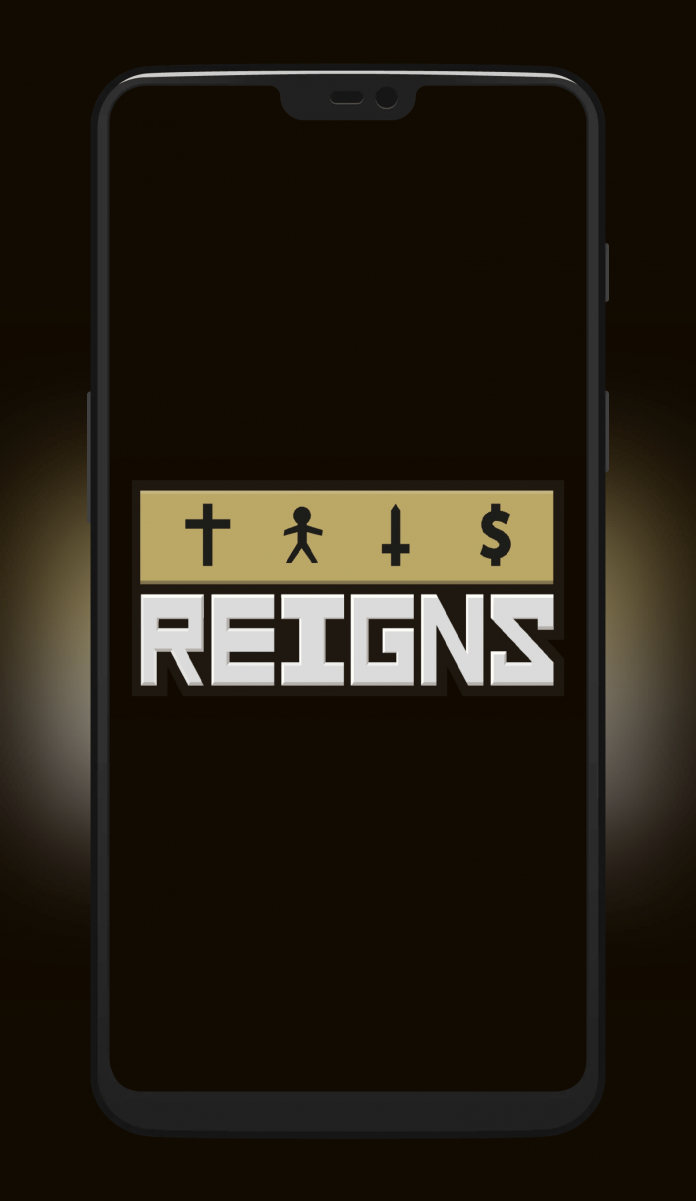 Have you ever wondered what would you do if you controlled a kingdom? Would you govern for your people or for the money? Would you prefer to do ethical deeds that take a toll on your kingdom’s finances, or accept some money even if that means the citizens will look you in a bad way? What about the army? The church? In Reigns, you get full control of your lands, and need to make decisions in order to keep several factions in order.

Reigns is like Tinder but with royal decisions: swipe either left or right and question your choices after. As a king, you will get multiple situations, brought to you by your advisors. It is your job as a king to select the choice that is more appealing to you and your resources. You have the church, the people, the army, and the treasury, all depending on your choices. Give too little power to the army, and your kingdom will be invaded. Give too much power to the people, and they will overthrow you.

When starting the game, you will get your name as a king. Unfortunately for ladies, there’s no option to govern as a queen. We all know queens are the actual governors, though. After that, you will start getting questions from all kinds of people. Cards range from “We need a hospital” to “There are some witches that are meowing and it is spreading throughout the kingdom” to “You found a mushroom, the blue one seems edible.” A big part of the success of this game is just how great the sense of humor is. 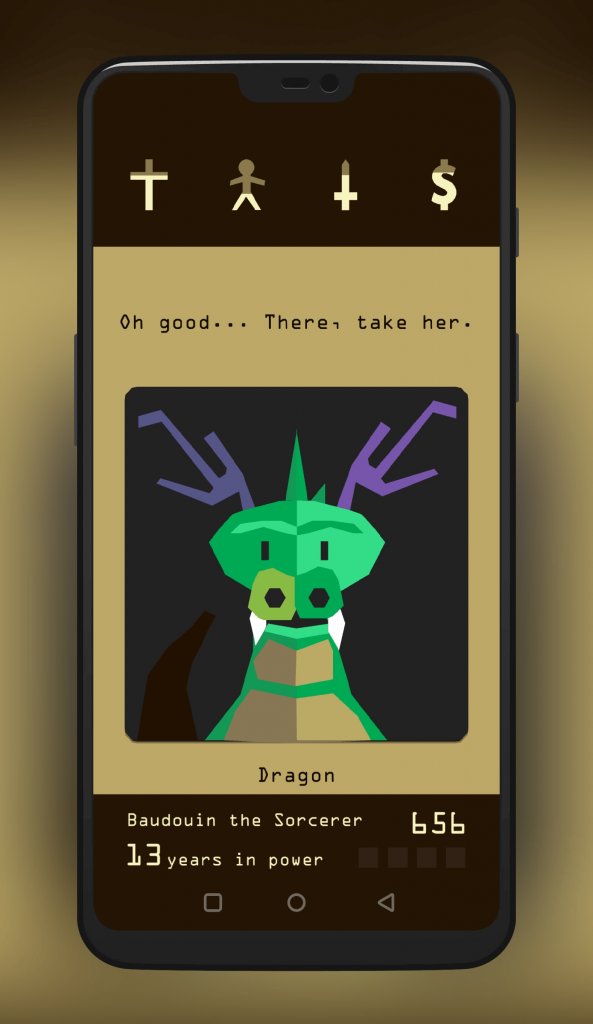 You will always get two options for every situation. For example, the mushroom case above would have something like “Eat it” or “No way.” Depending on that, your character will either have its resources affected in some way, or you will gain some ability, building, or other power. Let’s start with the resources.

As previously said, your decisions affect four different factions: the church, the people, the army, and the treasury. For each decision, you can swipe slightly left or right, and see how choosing it will affect the faction. If an advisor comes and says “The town smells like trash,” you might have options like “Clean it” or “Let them rot.” The first option could cost loads of money but it would increase the people’s satisfaction. The second option could reduce people’s happiness but still cost money because now you need to treat your citizens from a plague.

The beautiful thing about it is that you never know what will happen. You get either a big or a small circle on top of the affected resource. However, you only know if the resource will increase or decrease after you have swiped a card. Thus, you are left to your own instincts when thinking about every decision.

There are some cards that are very obvious in their effect, but some have effects that you would never imagine. That’s what makes every single question in the game a challenging one, and keeps the game fresh, even though the questions are reused.

Buildings and other items 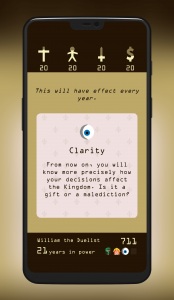 Throughout the game you will also get the chance to build stuff for the people, such as higher walls or a barn. These will aid you throughout your reign, and, since they are permanent, they stay around even after you have died.

There are also other items that only work for the current king. There’s one item that lets you see if your decision will affect a faction positively or negatively. There’s a mushroom that makes everyone sound funny. There’s an item that will make you crazy and prevent you from understanding what people are talking. Most of the items are useful, but some are also included just as a fun thing.

Death is part of the game

Unlike basically every game I have played, overperforming in Reigns is as deadly as underperforming. I have died a couple of times by giving too much power to the people and to the army. They have both overthrown me. Just like in real life, I have never had too much money, so I don’t know how that can go wrong. You have to keep your resources neither too happy nor too unhappy, which adds a whole new dimension to the game.

However, there are some instances where it seems like the game decides that you should die, and thus kills you in cheap ways. For example, there’s been a couple of times I have been sent to a dungeon and both times I have died almost out of nowhere. Another time, a plague entered my castle after a wrong decision and finished my reign. It’s good to have some lack of predictability in the game, but dying randomly is a little infuriating.

One of the biggest flaws of this game is its absolute lack of story. You are a king, and apart from some very small references to a story, such as you having a child, there’s no narrative to speak of.

The game tries to work around that by creating objectives. These could range from meeting a special kind of character in-game to perform some action, like govern for some time or even meeting the devil.

Also, there’s a high score functionality. Your longest runs as a king are automatically saved for you. Other things that you encounter during your years in the throne are also recorded, such as the characters you unlock and the kinds of deaths you have had.

While these are nice to have, they are no substitute for a well-constructed story. This means that, after you have seen all the cards that can be drawn, there’s no much point in going on. Fortunately, the game makes sure to push that as far as possible. I have discovered almost 300 cards and it seems like I have only seen 1/3 of them, so there’s a lot of content to explore before you inevitably have seen it all.

Reigns does a good job in trying to keep audiovisual elements consistent throughout the game. The same font is used throughout the game, colors follow a predefined palette, and all graphics follow a pixelated graphic style. The character’s portraits have enough details to be distinguishable but still do not deviate from the style of the rest of the elements. Everything is just laid out in a superb way.

There are several sound effects, primarily to introduce a character. They are mostly gibberish, but with time, you learn to identify recurring characters just by listening to the sound effects they make. It’s almost like the cry of a Pokémon. Also, kudos to the music. It is atmospheric and immersive, which makes it superb for setting the mood for the game itself. 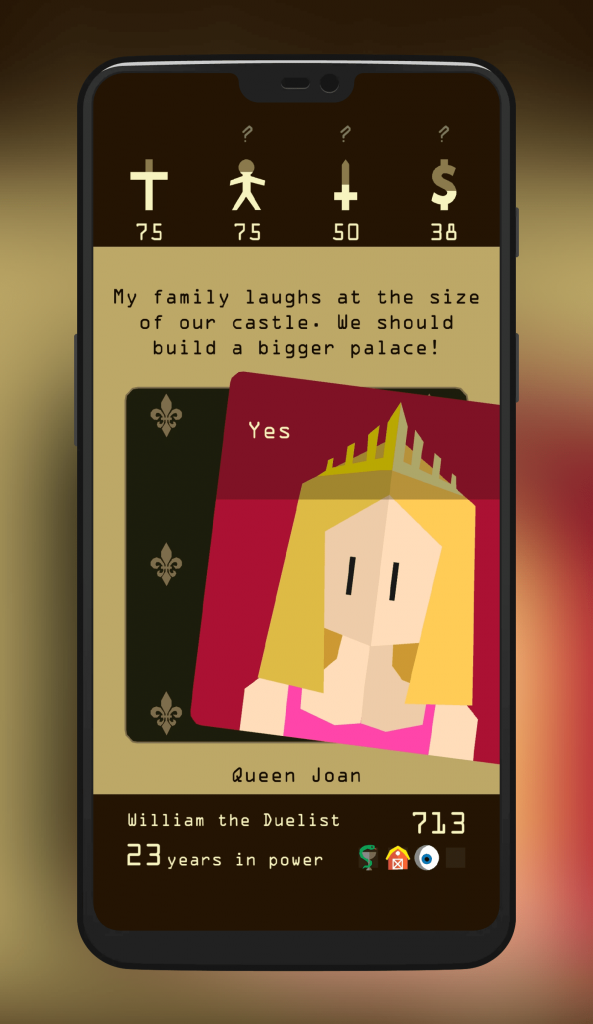 Reigns takes a fun approach to controlling a kingdom by making you take black-or-white decisions that directly affect the factions inside it. There’s a lot of cards to play with, each one with unintended consequences and subplots. Unfortunately, the progression is a bit lacking, with small elements thrown into the mix to make up for it. There’s no story either. Thus, if you want a game that provides instant fun without any effort, you can’t go wrong with Reigns.

Download and install Reigns from the Google Play Store. 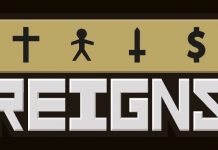 Reigns : Rule your kingdom with a swipe of your finger (Review)